Sometimes what first draws your attention to a game can be a weird flicker of nostalgia; for Airheart, that was seeing the aircraft customisation screen and thinking of Armored Core and Gran Turismo.  And while Airheart’s customisation isn’t as detailed, I’m a real sucker for any sort of tinkering in a video game.  So I sat down for a game. 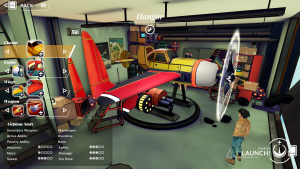 That was at EGX, and I only got a short time with it.  So when the opportunity came to spend more time with the Airheart for this preview, I jumped at the chance.

Airheart is a roguelike twin stick shooter, currently in development by Blindflug Studios and available in early access on Steam.  Playing as Amelia, you pilot your aircraft through layers of sky, catching the fish that swim amongst the clouds and floating islands.  Selling fish allows you to fund aircraft upgrades, which in turn gives you the survivability to reach higher cloud layers.

And you need a more durable aircraft, because you’re not the only one up in the clouds; there are increasingly dangerous sky pirates and sentry turrets as you ascend, and being shot down will lose all your cargo and upgrades.  In this way, Airheart can be very difficult indeed.  If you get greedy and over extend your reach, you can find yourself losing an hour or so of progress.  Worse still, if you fail to guide your plane to the workshop, you crash into the desert below and must start a completely new game. 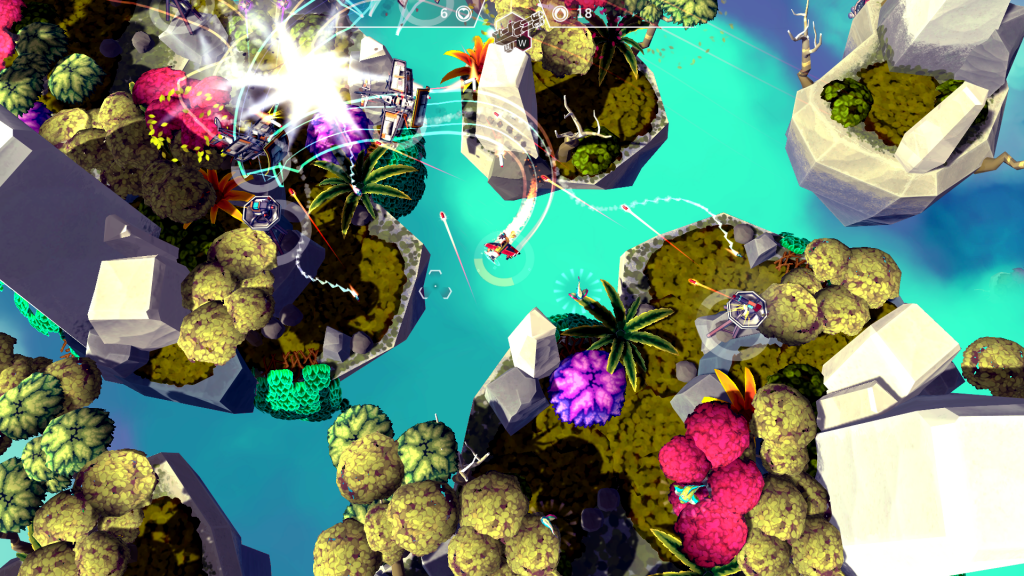 There is, at least, a way to avoid being shot down.  If things are looking a little hairy, you can always bug out and retreat to the workshop with plane and cargo intact.  This begins a sequence that involves rotating your plane around the outside edge of a circle as you descend, avoiding the islands you passed as you ascended.  Ascending while fishing and fighting, then descending becomes the rhythm of the game, and when it clicks it’s pretty satisfying.

Speaking of fishing, the developers stress that one of the main themes in Airheart is the consequence of overfishing, and it’s something the game communicates incredibly well.  Each sky layer has a population of fish and fishing causes that population to decrease.  The population only replenishes by a certain percentage each run, so the lower the population, the longer the recovery time.  When you couple this with how fleeting your equipment can be, it becomes hugely important to manage how many fish you take on each run.  If you fail to do this, you’ll find yourself starved of resources.

Fortunately, sky fish aren’t your only source of potential income; you can also gather items dropped by defeated enemies.  These come in the form of either oil, which directly translates to money, or scrap.  Scrap can be used at the workshop to craft equipment for a small fee; that fee is much smaller than the cost from the store, so it’s well worth keeping an eye out for dropped scrap.  I found myself using this to build up stocks of duplicate pieces of equipment just in case I crashed.

The equipment you gather also has an impact on how your plane behaves.  Earlier planes tend to be quick but fragile, while more expensive planes tend to be slower but more durable.  Equipment also comes with abilities, giving you a boost or marking enemies locations off screen.  Perhaps it’s simply my playstyle or lack of skill, but it did feel like the heavier planes were essential for higher sky layers, as combat gets very hectic and you’re guaranteed to take at least some damage as you progress.  While there are only three planes in the game at the moment; there’s another being added in the November update, and I really hope more come in the future.  It would be great to see the quicker archetypes made more viable and also perhaps have some others added.

In terms of controls, both controllers and mouse and keyboard are supported.  Having used both, I’d really recommend a controller, as the mouse stops responding if the pointer strays to the black borders at the edge of the screen.  In game, the aircraft controls are nice and responsive, with nimbler planes allowing you to make quick banks to avoid enemy fire.

Combat is great fun too, since enemies come in various forms and each needs a different tactic to defeat.  Some smaller craft mercilessly chase you, trying to ram your craft; larger ones pack homing missiles; while huge floating fortresses and bosses have particular cones of fire, allowing you to pick approach vectors where you can’t be shot.  It’s all really satisfying.

There’s also a wide selection of weapons available, allowing you to pick something that suits your playstyle.  My personal favourite quickly became the scrap cannon – a spread weapon that packs a decent punch.  Some come permanently mounted as part of your choice of wing, but your main turret can be switched out.  Brilliantly, weapons also impart force on your craft when fired.  If you’re in a pinch, it’s possible to fire behind your craft for a speed boost.  It does also mean that the forward facing wing weapons tend to be of little use though, as firing them stalls your craft’s movement.

Visually, Airheart has the look of a Saturday morning cartoon.  Everything is wonderfully vibrant; clouds are a range of blues and purples and the floating islands are populated with foliage of all sorts of hues.  Both the craft and the environment are simple and uncluttered.  It’s like playing an episode of Talespin.

In its current state, Airheart is a decent amount of fun, looks wonderful, and shows a lot of promise.  But the ease with which you can lose progress is probably my least favourite aspect of the game.  Quite a few times I found myself being shot down and simply turning the game off in frustration.  I’ve always ended up coming back for more, but I really feel that some of the penalty could be reduced; perhaps by allowing your lost cargo to be recovered from where you dropped it or from an enemy that has picked it up.  The November update is introducing something called blueprints, which may go some way to mitigating this.  And in spite of the difficulty I’m really looking forward to seeing how Airheart progresses.

Pete should really write a bio at some point.