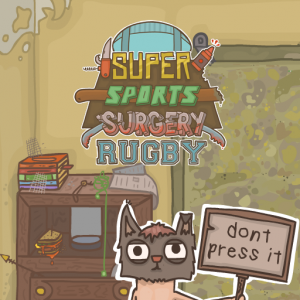 After an unexpected promotion you are now the lead surgeon for a rugby team; hammer pimples with sausages, seal cuts with hot wax, and use your trusty pen-knife to amputate. All to get your team back up to peak condition.

I really enjoy the game’s self-aware humour. It knows that Trauma Center, as with any other simulator game of the sort, was great because of the actions that you had to take, rather than the journey to get to that point, or even the context of the actions. By giving you a ridiculous toolset -including a stick, a kitten, Ketchup & Mustard- the game immediately lightens the tone and informs that it’s here for you to laugh at, and not get overly stressed at BECAUSE THE GAUZE WON’T GO ON, WHY WON’T THE GAUZE GO ON?

I honestly hope that this is the first of many outings for this series, I know I’ve certainly got time to spare for a game of this ilk.

Super Sports Surgery: Rugby is set to release shortly after it passes through Greenlight, when it does it will do so for Windows PC & Mac.