If you asked me, “What would Gone Home look like if it was a horror game?”, I would point to Notes of Obsession. Aside from being an academic achievement by seventeen Swedish students; what makes this game shine above others, is its surreal setting. In a bloated genre Notes of Obsession makes a mark by hitting every theme that you would want from this type of game and excelling at it. The game has won a couple of awards in Sweden and has hit over a hundred thousand downloads, so let’s dive in, shall we? 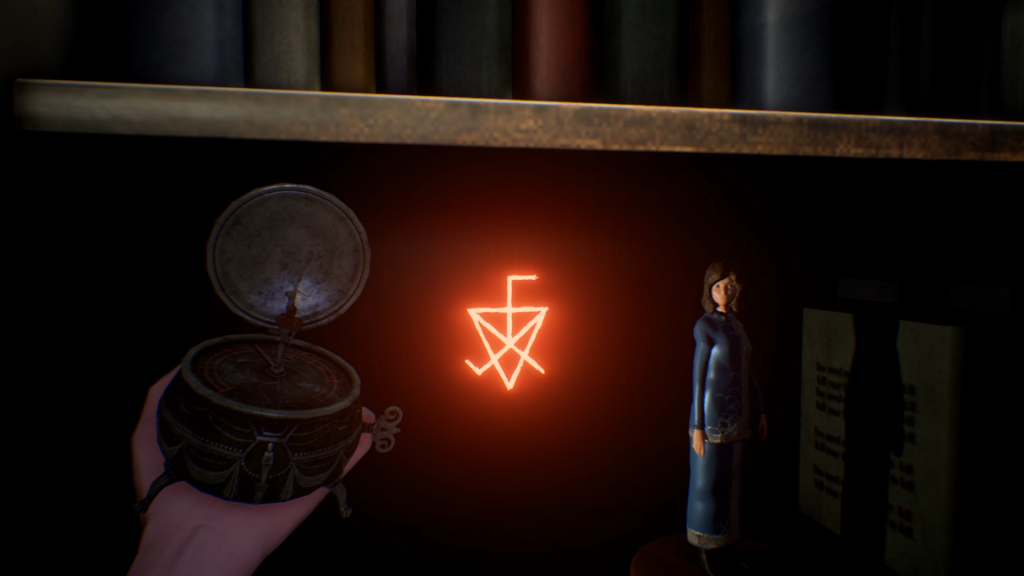 Keep in mind that I am going to be spoiling things, so before you read this I recommend playing the game for sure. The game takes place in a Swedish home. (Insert witty IKEA joke here. Now that is out the way.) You play as a mother who awakens in her living room and feels that something is askew in the house. She investigates strange noises coming from upstairs. From the moment she opens her eyes, you can tell graphically, the game is superb and has richly detailed environments. This is where my comparison to Gone Home originates, as the house is, in its own way, a character. You feel that people lived  there and that every nook and cranny has a story to tell. Especially the illustration on the wall and the texture of the wallpaper, which you can almost feel. The game is eye popping as it presents to you this very well designed home. This continues throughout the house and becomes its own instrument of terror as you watch things begin to slowly decay in your child’s room.

Now from a gameplay standpoint, Notes of Obsession is simple. You eventually find the mysterious noise coming from a creepy as hell music box and when you wind up the box things start becoming twisted. Strange symbols begin appearing on different parts of furniture strewn about the residence; it boils down to a bit of a scavenger hunt. That being said, the developer was smart in using a minimal amount of space in a big way. This where I found some gripes with the game. The gameplay element is there, but it is not really the focus.  I chuckled at the fact I couldn’t open doors in my own house, even if I managed to get behind it. The story element is present but only touched upon briefly and vaguely. Your overall goal is to hunt down symbols while being hunted in your own home. You’re rewarded at the end with a knife, which makes me ponder why she just didn’t go to the kitchen? One shouldn’t try to insert logic into this genre though. The game rides a fine line between scary as hell and almost tech demo. Given that this was a student project, not surprising really. Despite this though you are not really going to care until the game is over and you take ten minutes to breath and then think about the experience.

These are minor gripes for a game that was made in ten weeks, especially given the fact that the game does well in most other areas. It excels at the aforementioned fantastic graphics, bone chilling sound design and music, and scare factor, which uses a mixture of jump scares and a few other surprises. This is one of those games you want to play with headphones. The music box just adds an overall eerie and panicky feeling to almost every action. Of course we can’t talk about a Horror game without asking a simple question, is it scary?

I can easily say,  “Hell yeah it is!” I remember the moment I walked into what I thought was the hallway door and ended up being the closet. Suddenly there was banging on the door and I was helplessly trapped inside. There is a correlation made here between Notes of Obsession and P.T., while there are similar ideas that you can see, but I wouldn’t jump the gun. The game just does an amazing job of messing with your head. You can see the jump scares coming but they still make you need new underwear. The monsters design is utterly terrifying and looks like it came straight out of Silent Hill. Although it  can be stupid and slow at times,  when the monster does manage to get its hands on you, that scene is guaranteed to haunt a few nightmares. Especially since it snaps at your neck and everything fades to black.

For the the low price of FREE, you really have nothing to lose from trying out this game. The only regret is that this game is bite sized. It’s like a piece of pie and it leaves you wanting more. I can say that the average gamer might take anywhere from twenty to forty minutes to finish the game. The latter, only if they really take their time and smell the rotting  roses.  Horror fans will want to play this for sure and I can easily recommend it. Keep in mind though that this doesn’t really alter the formula or make any ground breaking revolutions. You’ve played this type of horror game before and it feels familiar but in a good way. The ending of the game is menacing and doesn’t provide much closure. Many have theorized the mother had mental illness and was actually being chased by her child, others think it was all just a dream. Hopefully we get some answers and this won’t be the last time we get to frantically meander through a Swedish home.