It basically means, do better and don’t make the same mistake again. In Lost Castle, you will see the word game over splattered across your screen more times than I care to count. It never bothered me, not once. Dying was the beginning of a new journey, another chance, and it really helps that Lost Castle is ridiculously fun and addictive. 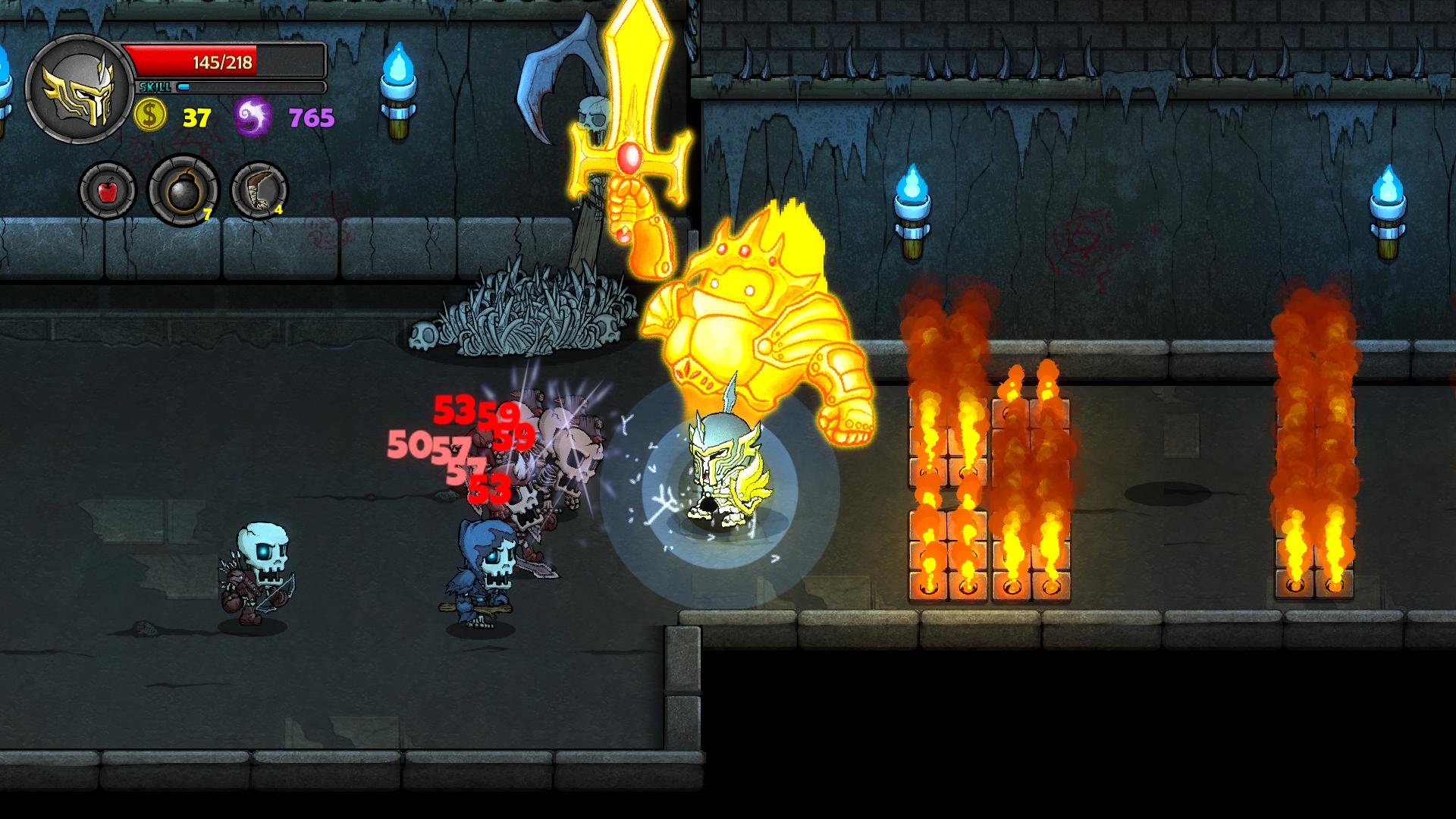 Lost Castle(Steam link) is a beat’em up Roguelike RPG with just about everything being randomized. If you have ever played Rampage Knights, imagine that game with WAY more added and slightly less complicated combat. The story of Lost Castle is simple, dumb Wizard releases demons in an attempt to gain power and everything backfires. Suddenly demons are running amok and it’s up to Treasure Hunters to put a stop to this and to get some sweet, sweet loot while doing it.

After some opening scene shenanigans, you wake up in a dark damp cell. The doors have been opened by a mysterious hooded figure that remarkably looks like the Wizard. A coincidence, I’m sure. This is where the butt kicking begins. There are a total of five areas to the game with progressively more difficult baddies. You start off with some crazy goblins and their contraptions and you end up with demons, demons, and more demons.

The real highlight of Lost Castle is that its very easy to pick up and play. 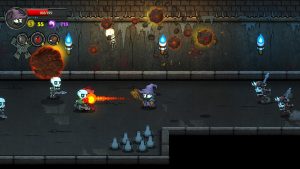 You need very little brain power to enjoy this game. You can just veg out and even better you can do it with a friend. Lost Castle features coach co-op as well as online multiplayer. The player limit is two, which is low, but it’s enough for me. I can name very few games that I can play for a whopping thirty six hours with my significant other.

Gameplay consists of building yourself up while climbing the difficulty ladder against an onslaught of monsters. Trust me when I say the chips are stacked against you when you first start out. Not to worry though, because as soon as you die, you access a soul tree. This you can equate to Rogue Legacy where you spend points to upgrade yourself, and your starting upgrades. Upgrades come in many forms such as a blacksmith, potion master, or more hit points at start. This makes every game worthwhile as long you have enough souls to purchase an upgrade. This is why dying isn’t really that frustrating. Death makes you stronger. 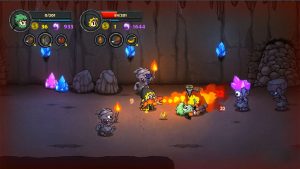 There is a vast array of weapon types ranging from sword/shield, bows, muskets, staffs, daggers, lancers, two-handers, These weapons take many shapes in the form of enchantments, stats, and abilities, but all behave like their base weapon. As an example, you may end up holding double axes but they behave in the same way daggers attack, but these have a plus ten to health and give you the ability to berserk. This gives Lost Castle a ridiculous amount of variation and room to play. Swords that summon a holy light, a blunderbuss that creates black holes, you name it, its probably in the game. It’s quite extensive and its always fun to find that one weapon you’ve never played with before. I am still finding new weapons after almost forty hours of game time.

The exact same treatment is given to potions and armour. Potions are completely random and can be helpful or they can be a downright pain. Due to the roguelike nature of Lost Castle, its very difficult to plan out “a build”. You more or less decide what you are as you go through the game, or with the starting weapons at the cells. Areas are procedural but after playing as long as I have, you’ve seen all the room combinations. You do begin to get a sense of whats to come and recognize rooms for the monsters that inhabit them. To be frank the room variations mean very little other then where my enemies are going to lay for eternity.

Bosses, oh my there are plenty of bosses for you to fight. 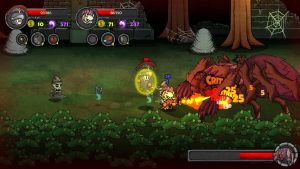 Lost Castle is always keeping things fresh. Per area there are about four bosses or so and the game does an okay job of spoon feeding you these fights. I will say that it spoon feeds it a little to slowly sometimes. Each playthrough is anywhere from an hour to an hour and half. Which is about perfect for quick play sessions. However unless you win the game every time you play, it takes a while to unlock more content. You can thankfully walk away from the game and pick up where you left off in single player. I fought the Slime King a hundred times before I finally got to see the third boss of the first area.

This is not done for the sake of grinding. Lost Castle wants you to replay the game, over, and over. Four times to be exact, to actually beat the game and all of its bosses. After beating the final boss in the fifth area, this usually unlocks a cadre of new weapons, armors, and while not specifically said, bosses. The story also progresses and gives you another reason to go back through everything all over again, but that I won’t spoil here. Some will call this grindy and that is a perfectly fair assessment, but I didn’t mind because of all the aforementioned variations. Yes, you are fighting the same units, bosses, and know which items do what by your third playthrough, but there is more.

There is a Hardcore mode which ramps up the difficulty with new units, and the true final boss of the game. This mode is going to put everything you have learned to the test. I haven’t beaten it yet if that tells you anything.

From an art stand point I am more than happy with Lost Castles style.

It’s very cartoony but it stays faithful to the horrible visage of demons, monsters, etc. If you played Rogue Legacy, its basically the same thing. There were plenty of times I found myself chuckling at the Great Moleshark, which is exactly what you think it is. Then there are bosses like the Fallen Dragon, which look as intense as it is to fight it. Some of the abilities your weapons have I found particularly impressive to watch in action. I have very little complaints with the game visually. A part of the charm of Lost Castle is those cartoony, chibi monsters. One minor note is that there are SO many typos in this game. Even some in Chinese. 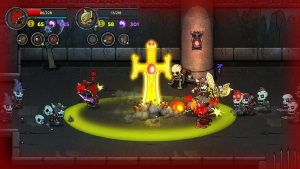 Sadly, the music of Lost Castle is very forgettable, it gets the job done but you won’t really remember it. The boss fights have some intense tracks but you are usually so focused on surviving that you don’t really listen to the music. When it comes to music though, I always defer to personal taste, and if you do enjoy the tunes, the soundtrack for Lost Castle is available for purchase. The sound effects on the other hand are handled quite nicely. The crackling of magic spells or when your battle axe cleaves an enemy are very satisfying to the ears.

To wrap up, there is plenty to unpack when it comes to Lost Castle. I didn’t even mention the holiday events, Steam achievements/cards. When it comes to innovation and the quirks that make this different from the rest of the pack, I can easily recommend Lost Castle. Simply based on fact it does everything right for this type of game. It doesn’t re-invent the wheel, but damn those are some nice rims if you catch my drift. You are going to get plenty of bang for your buck at the low price of $9.99, which is fantastic for the amount of content. If you enjoy pointless slaughter and randomized everything, this is a game you must play. Have a friend? Get. This. Game.