The dark thin corridors basking in a dim orange, lit by a nearby candle, the pattering footsteps of tiny creatures coming to kill you become louder and louder, two heroes stand back to back ready to battle further into the dungeons.

Heroes of Loot 2 by Orangepixel, is the sequel to its other half, Heroes of Loot. It’s a game about venturing throughout various levels of dungeons from a top-down perspective, slashing hordes of enemies, gathering treasure, avoiding traps, and above all else, surviving and making it as far as you can until you reach the Loot Boss – also known as, the final level – It’s a frantic game that takes various elements from the original and makes them either slightly better, or removes them. For example, there is no co-op function anymore, and despite this being a weird move, it’s not a thing to freak out about as the solo game alone offers a magnificent experience.

There are four heroes to choose from; an enchanted Elf, a wonderful Warrior, a wacky Wizard, and a valiant Valkyrie. Those are the ones that are teased in the trailer at least, and the only ones available to choose from. When you actually load the game up, you’re faced with the option to select one ranger and one warrior. Yes that’s right! You can control two characters!

“…everytime my health started reaching critical levels I flicked to the ranged weapons and stood back and cleared a room from a distance, leaving the treasure safe, alone, unguarded.” 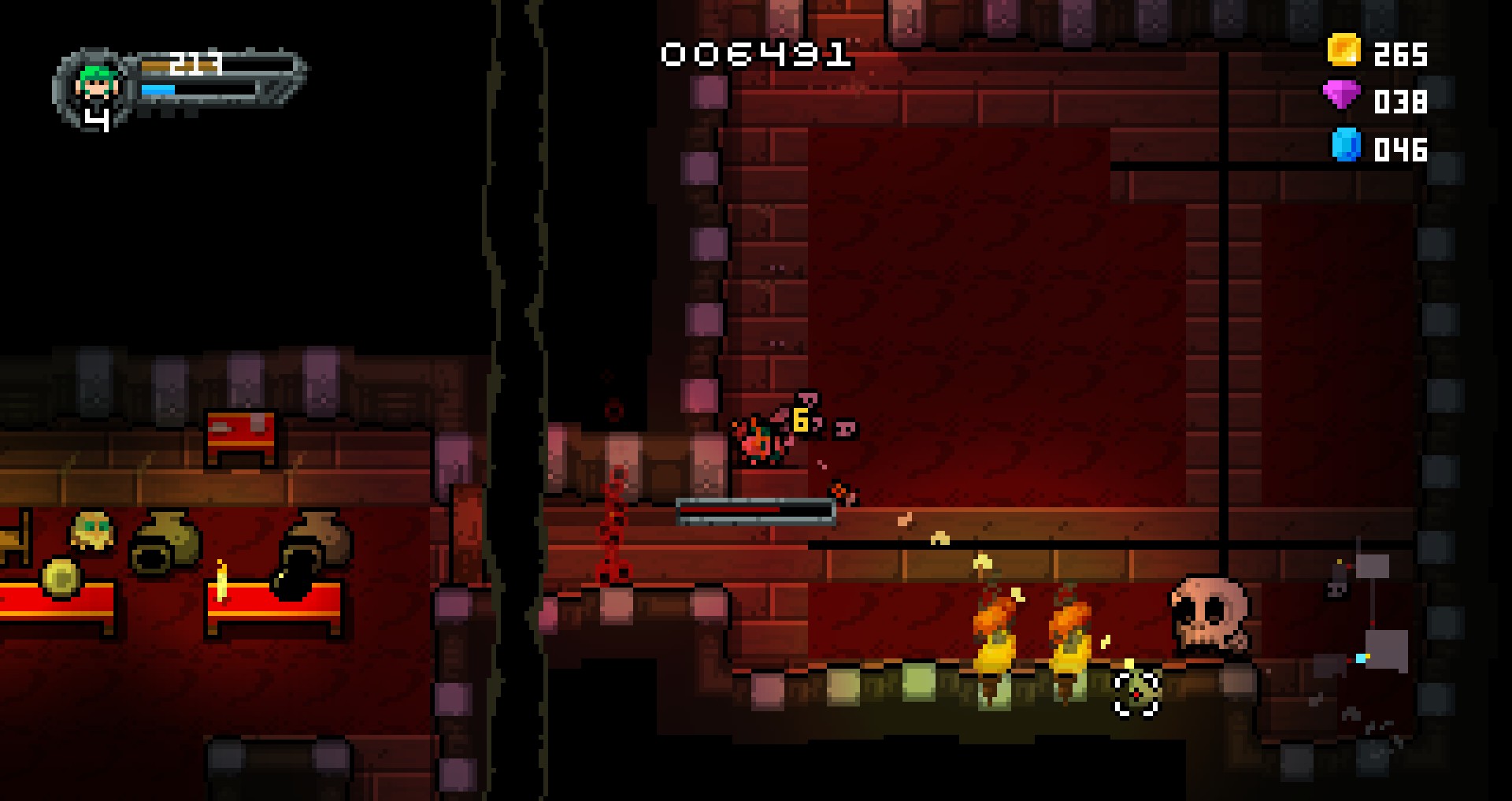 Each character have their own weapons as you’d very well imagine; Wizard uses magical bolts, Elf uses arrows, warrior uses a warhammer, and the Valkyrie uses a sword. The warrior weapons vary in speed, the warhammer is slower than the sword but deals more damage, whereas the ranged weapons appear to be the same in speed and power.

The graphics in the original were quite bland and flat, in Heroes of Loot 2, there’s a definite improvement on the textures and the overall atmosphere. The darkness surrounding the rooms remains just like before, and now the rooms have far more detail involved. The floors now have patterns, textures that stand out, and they don’t look like tiles that have been repeated. There is a new addition that brings the floor patterns even more to life by showing reflections of your heroes below your feet on certain tile textures.

Although the graphics have been improved, the shading appears to be too much, so much in fact I had to actually bump up the brightness just to be able to see a decent amount of the room. Not only that but the atmosphere you get from the game is fairly eerie, the darkness sets your focus to the centre of the screen, but the sound effects that are happening off screen play on your mind. The repetitiveness of a slamming door, and the tinny sounds of spikes rising out of the floor put you on edge. 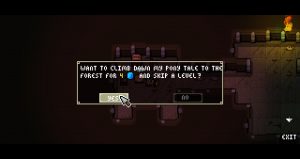 The speed of the games FPS has been significantly improved also, rather than playing like the games it was inspired by from years ago with a frame rate that made the entire screen movement jittery, it has been improved to play incredibly smooth. Camera movements flow in whichever direction you turn, the movements of the enemies and your heroes pitter-patter around with ease.

The overall gameplay is fairly straightforward. You start off only able to play the story mode – survival is unlocked upon reaching level 5 – and each level has an “exit” hole to reach; reach that and you progress to the next level. Not every level is a darkened pit of depression, you’ll find yourself in cold winter worlds, and forests for example. There are also some characters or shops hiding away in the levels that can offer you potions, weapons, or a way to skip a level and get even closer to the last level.

“…there is no co-op function anymore, and despite this being a weird move, it’s not a thing to freak out about as the solo game alone offers a magnificent experience.”

With each level you’ll face a huge swarm of enemies, but don’t be fooled by the sheer amount of them, because the attack system makes it fast paced and also easy. In fact performing speed runs is super easy, you can just run through the enemies and cut them down and rush to the exit. However if you want to actually enjoy the game, then take your time, fall back, gather treasure, switch characters.

Although, if you do a speed run, you’ll essentially be missing out on level up points, treasures, and artefacts/keys making each level harder to pass as the enemies will be increasing in skill the further along you go. This happened to me a lot, and everytime my health started reaching critical levels I flicked to the ranged weapons and stood back and cleared a room from a distance, leaving the treasure safe, alone, unguarded.

Talking about treasures, there’s quite a few variations of treasures and chests. Firstly, Gold. This is used to purchase shop items and the like. Purple gems and blue gems are used by various different characters to offer you different resources, health potions, level skips. Then there’s the chests, each colour bares a meaning, for example, red chests mean health, blue mean level up, yellow contain one piece of a certain perk. There’s gems scattered everywhere, small hp potions littered around, and runes and idols that will help unlock a locked gate. 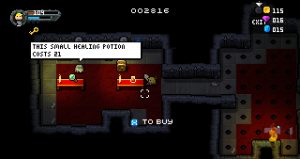 There’s no set room for each level, in fact each play through seems to throw different levels at you, although these aren’t randomly generated, just shuffled with various difficulties. Either way, each room can just be a simple hack’n’slask to the exit, or it could be more complicated and require tasks to be completed before a gate leading to the exit can be unlocked. Sometimes even two gates. Tasks such as defeating a boss, grabbing a key, activating all the switches, etc are the ways to unlock them. There’s even some time out rooms where you either visit a random shop, or even a treasure room that’s littered with coins, gems, and food! Sometimes though you’ll find yourself suddenly thrown into an arena level, which normally features a pretty big enemy or a quite a few.

“It’s a game that allows you the feeling of being a hero, and just when you start finding it too easy, the oncoming levels up the game with more traps and enemies.”

Bosses aren’t too hard, they actually feel like bosses in the respect that you can clearly tell they’re a boss, they have boss like attacks, they’re huge and difficult to manoeuvre around, but their HP can drain pretty quickly. It’s rather weird, as your HP seems to last quite a while, meaning the game could be seen as fairly forgiving for quite a few levels. Each time you level up, your max HP grows, so by the time you reach the final boss, you shouldn’t find it too hard..or will you? If you do die then you’re back to the title screen to choose a new set of heroes to go through it all again. 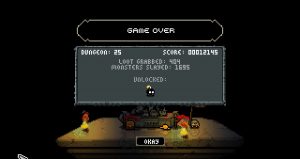 As you play, you’re not only levelling up your little characters, you’re actually levelling up your…I’ll call it, “Game Rank” as at the title screen there is a progress bar. It will level up slowly as you play the game. Hit level 5 you unlock survival mode which pits – as you’d expect – loads of enemies against you while you attempt to survive for as long as you can.

The music for Heroes of Loot 2 certainly makes you feel like a hero, it throws dramatic instrumental swells out at you, making a huge impact on your psychological state. I started booting the game up feeling rather pedestrian, then once the game started, a sudden, “hero of dramatic’ness” feeling flowed throughout my veins. I was ready for battle. As for the diegetic sound effects, there’s a lot of clashing, a lot of slashing, a lot of scraping, and a lot of “Ding, ding, ding”’s when collecting treasure.And despite the game not having any voice acting for the characters, there is a voice over for a few in-game scenarios, such as levelling up, spoken by someone who sounds like they were a little too close to the microphone.

“Bosses aren’t too hard, they actually feel like bosses in the respect that you can clearly tell they’re a boss, they have boss like attacks, they’re huge and difficult to manoeuvre around” 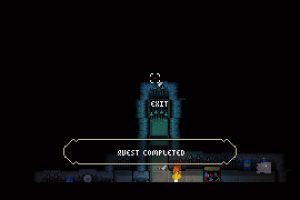 The way the game is controlled is fairly simple, although when you first boot the game up, the movement keys are assigned to the arrow keys and you’re told that whichever direction you point with these keys, is the direction you’ll fire. And then you get told you can aim with the mouse, which in all fairness, is so much easier, except it feels weird using the arrow keys and the mouse at the same time…at least for myself anyway, it must be the distance between the mouse and arrow keys in comparison to a right handed gamers WASD set-up. And that’s just it, it feels like the game was designed by a left handed gamer. Thankfully the controls can be re-mapped though.

Besides that though, the controls are fairly straightforward. Click and hold to continue attacking, scroll wheel to switch between heroes, X to interact. All pretty standard.

There didn’t seem to be too many bugs in all honesty, just a few AI issues with enemies getting stuck in doorways – which is actually a help – and sometimes bomb chests can cause you to get stuck in a wall for a short period of time. However there was one that was rather irritating. When I went to change my key bindings for moving my characters, something happened. I shrugged it off as a mistake on my part. It wasn’t until I had to check a key binding to remember which key was my inventory that I realised that there is actually a bug here. Upon choosing the “key binding” option it will throw a random binding to be re-mapped over the screen. For example, “Press the key for right” would show. I had to make sure I wasn’t changing anything too huge whenever I visited this menu. Once you get past that bug though you can choose which key binding you actually want to change. That was about it, aside from a few spelling errors within the dialog.

Heroes of Loot 2 is a fantastically fun, fast paced game. In fact I’ve found myself so immersed, so concentrated, that I lost four hours to it the other night. It’s a game that allows you the feeling of being a hero, and just when you start finding it too easy, the oncoming levels up the game with more traps and enemies. It’s a great gem of a game, a fantastic sequel, and I’m going to go straight back on it now!