Twin Stick Shooters are great ain’t they? they very rarely need a story line, they’ve got plenty of action, music is pulse pounding (if you like that kinda thing) , plenty to shoot at and they keep you on your toes (not literally) and there’s plenty to collect and this is what we have right here; and for once I actually plugged in my 360 controller for my PC to play this “properly” and i’m so glad I did. It felt like it should… fast, furious, and exhilarating.

It’s Developed by Vladimir Shlapak and published by Sometimes You, and BitMaster is quite a strange game as some of the gameplay aspects are quite new and brave, but before I mention all that’s new to the genre, I think I had best start with the basics…

BitMaster gives you a story about civil war, but all you need to know is…kill the “baddies” till you get to a twentieth wave (20, 40, 60, 80, 100) then you’ll meet a boss and do it all over again till the next boss and so on and so on. Sounds easy? HAH!! think not! Every quarter of the map has different buffs (3 in total,which are; faster attack rate, generating up your shield and faster movement) and/or different debuffs (6 in total which are; no shield regeneration, drainage of life and shield, move slower, drainage of shield, slower attack speed and the horrifying double damage to you. 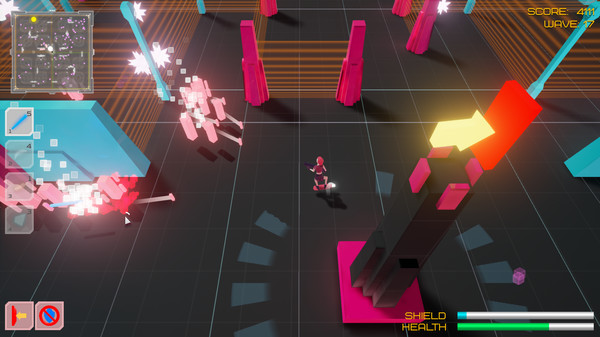 With there being very little of the item pick ups for shield and health restore, and the fact that you only have one life before you’re chucked back to wave 1 when you die, the game feels “hardcore”.  After about wave 10, as that is when there’s more then one group of baddies to kill, you take your time in the first few waves and learn the basics, like how the yellow blob on the mini map is your pick up for that wave, whether that’s a new/upgraded gun, or not. You only get 4 weapons per character, There are the 4 weapons Nick (the first character) has, and they are always the same.

The white toe-nails (honestly looks just like them) that travel a nice long distance. The yellow shotgun like weapon that spreads out very nicely when upgraded one’s get found. Purple exploding “thing” that takes far too long to shoot in rapid succession against lots of baddies on screen (yes I called it an exploding “thing” but the explosion can just do enough damage to warrant the wait to shoot it again). Finally, the last weapon was blue triangles that don’t travel very far, but if you do end up getting just a bit too close to the baddies that one is the one to use, just not against the bosses as they’re just a mental bullet hell with thankfully no debuffs but no buffs either. Gladly it is in a wider open space then the normal map which is just like a maze in the inside working inside the map box.

The characters are a clever aspect to game, as there are 5 in total. The first one is Nick, as I mentioned above, he is your basic all rounder, but the other 4 that are available need to be purchased with 15 crystals each, which only seem to hang around in the corners of the boss rooms.

Music in the game is very trance-like but I wouldn’t call it dance, as trance is a sub-genre of dance…I know it does not make sense, but it’s the best way to describe it. Anyway, after I heard the music for a good 15 minutes, I just took off the my headphones by unplugging them from the headphone jack as there’s no way to turn off music in-game through the options screen.

Despite the game being good fun to play and bullet hell raining down on me, there were a couple of things I would have loved to know about the game.

A) Why are all heroes moving about on the maps / floors on some kind of a board? Yep you saw that right, all the heroes ride on a board and when they pick up a “wave” pick up as described earlier, where they do a cool trick which can kill a baddie, but there’s no reason why they are on them in the first place. Is this a stylistic choice? Is there a reason they have them? Is it part of a sport? 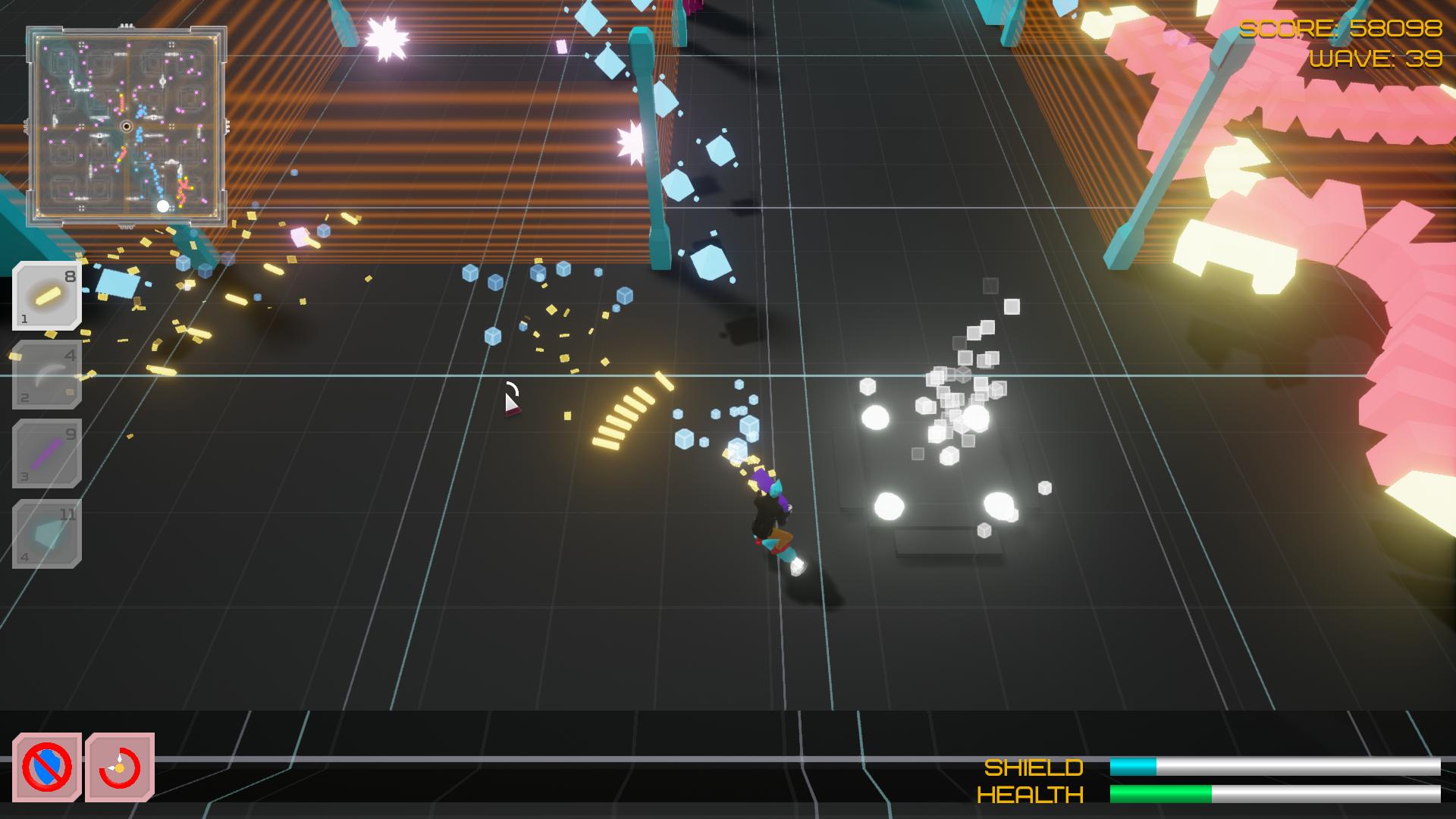 B) Why can’t we have a full top up of health and shield in the rocket as we get to the boss wave? Making the game hard to play may be the reasoning, but in a way, these small power ups seem to be a little bit harsh towards the player, especially with the amount of stuff firing towards you. The debuffs really do hurt you, and they take several waves of good luck to get your health and shields topped back up enough to deal with the bullet hell of the boss waves.

I really did enjoy the game, I really did, and yes, it probably came across like I got frustrated at the game, but it always gave me the urge for the “one more go” syndrome these twin-stick shooters give you. I didn’t get to unlock the other 4 characters sadly, but I am still finding myself jumping back on and trying to get even further.

All screenshots belong to Vladimir Shlapak.