Beyond Eyes is an exploratory adventure game centred around Rae, a small girl who, through a firework-related accident is now blind and has become increasingly withdrawn from the world around her, cutting out her old friends and retreating to the safety of her garden. One day Rae is visited by a cat named Nani and they become firm friends, but when Nani suddenly stops visiting, Rae is forced outside of her newly formed comfort zone in order to find her best friend.

For the remainder of the game you must play as Rae, guiding her on the path she imagines Nani must have taken in order to uncover his fate. Along the way you encounter both beauty and danger uncovered one step at a time and often changing from one thing to another as you draw closer. 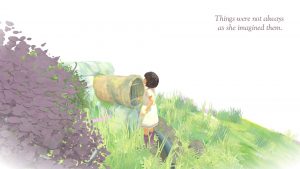 The main visual mechanic of the game uses a completely blank canvas until you are close enough to something that it then gets drawn – or more accurately for the art style, painted – in. Rae can see a very small distance around her but must rely heavily on her other senses of sound, touch and smell in order to interpret where she is and where she should be going.

In order to tell the story, cut-scenes intersect your gameplay every so often, and feature Nani performing various actions, such as jumping playfully at flowers or taking a drink from a stream. Chapters are signalled by text which furthers the narrative of Rae’s thought process, and indicates where to go from here. The pacing of the game is controlled very much by the slow speed of Rae’s walk, and forces you to take your time and enjoy the experience and the world forming around you. 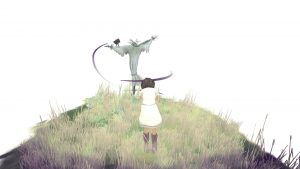 The game uses small audio and visual clues to let you know you’re going the right way in the form of paths on the ground, Rae calling for Nani and certain already visible elements in the distance to show you that you should try to get to them.  When Rae encounters something frightening her body starts to retract and the world goes darker; the music becomes foreboding and the scary thing gets a purple ring around it that Rae cannot penetrate. This often pushes you off course and forces you to find another way around.

Conversely, when Rae is enjoying herself, or feels particularly safe, this is reflected in her demeanour and reactions – for example, using stepping-stones to cross a stream Rae displays signs of trepidation as she feels for the next stone and transfers herself between them, however, she begins to giggle as she makes progress towards the other side and finds herself enjoying the experience.

Unfortunately, in a game that is so visually enticing, I felt myself being discouraged from exploration by the clunky controls and the over-zealous hit-box around Rae and the objects she encounters. Going off-track often resulted in hitting walls, gates, trees or bushes which loaded in at the last second and then were hard to navigate away from. I found myself getting stuck on objects, such as tree branches, that I felt I should have been able to walk past or underneath. This could have been an intentional mechanic intended to heighten the frustration of being blind and enhance the gameplay from that angle, however, it ended up hindering my experience, particularly as the game achievements seem to encourage you to interact with objects off the beaten path. After a while I stopped trying to deviate from the tracks on the floor which was a real shame. 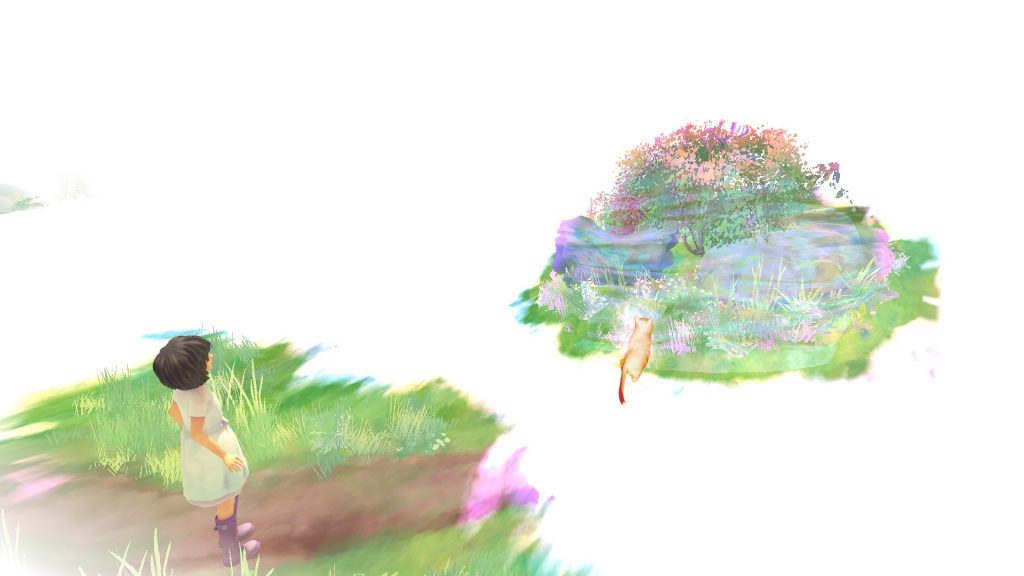 At just under 2 hours, Beyond Eyes is not a long game, and the ending felt rushed and unsatisfying. It would have been great to have more exploration and more story to uncover. Perhaps this would be less of an issue if the aforementioned clunky controls had not stopped me from exploring. Sadly I do not feel like this is a game I would go back to and play again to find the things I missed which is a shame for such an innovative game style and subject.

Overall, Beyond Eyes is a novel idea wrapped up in beautiful visuals and an intriguing and endearing story. The attempt to convey the fears and frustrations of dealing with newly inflicted blindness is extremely well implemented and you can see the transformation of Rae from insular and scared to bold and determined as you near the conclusion of her adventure. If the controls were smoother and the story more fleshed out, this would be an excellent and a thoroughly enchanting game to play, however, these small oversights make a big difference and prevent it from being the experience I felt it should be.