[Note: This game contains nudity, and is for the more mature audience. The review however, is clean!]

Not you. At least I hope not…your character is. Or at least they may be. They may be a vandal, they may be a necromancer, or maybe even partial to some cannibalism. Bastard Bonds is a game that finds you, guilty, or not guilty of said crimes. This results in you being thrown into jail – innocence aside. Your opening goal is to escape from the cold, harsh, prison you get sent to.

When you begin, you’ll find yourself faced with some artwork of an olden day cell window, and text will begin appearing in a high quality pixel art format.

The story begins to unfold by making it clear that you’re in a court room with a judge present. This is then where a character customisation screen appears. The body types, idle animations, and character on the left, the selection of clothing on the right with a board of colours. Your character begins stark naked, with everything on display. Choose if you’re going to be a man, woman, or orc. You then choose – very specifically – how you dress your character. On the right is a huge selection of clothing options, for example, the left wrist, the right thigh, a hood; you can choose which order they appear, as in, from skin to outer clothing, by clicking a little arrow that sends that layer of clothing underneath another layer. A nifty little option that allows you to create unique costumes, or get those shoes underneath your dress.

Once you type your name for the court, you get asked what charges you have been brought forward to them for. There’s a wide list of crimes to choose from, such as Cannibalism, Rape, Extortion, Quackery (which I genuinely thought it meant quacking, turns out it’s practising medicine illegally,) and many others. Some being far worse than others. There’s some small text along the bottom that indicates that whichever crime you choose, it’ll effect personal traits and available party members once the game gets going.

Once you’ve stated your crime, you’re asked if you are guilty or not guilty of committing whatever the crime, then you’re sentenced to the prison at the Island of Lukatt, to later be sent for execution.

Later in that cell you realise that something is afoot, as nobody has come to visit your character for sometime; and you decide to make a break.

That is until another character – that is chosen by the game in relation to your choices – pops along with some nourishment and asks if you really are what you stated you are within the courtroom. This changes the party member availability, character traits, and now the players alignment.

The person saving you then brings forth some standard RPG stats, where you can spend 10 points on whatever skills you wish. Magic, Guile, and Force serving as the core three categories, which then contain three columns, one for attack skills, one for defence, and another for utility. You do get a small piece of text detailing the other prisoners stats, so if you wish, you can work your stats around theirs and cover the bases. Then finally, the last choice to make for your characters traits is their overall personality. Insane? Miserable? Heroic? Your choice, however it will impact on later banter between characters.

The game finally begins, and you’re introduced to a top-down view of the cell and surrounding rooms. Your stats and items are along the bottom of the screen, Left click moves you around, right click interacts. You can switch between characters by clicking the avatars or hitting the tab key. You’ll notice white squares a few blocks away from you, these indicate how far you can more from your current position.

Now, the gameplay didn’t really suit me in this. I didn’t like the way the walls aren’t fully transparent, it makes the smaller rooms you’re inside harder to look around because the room is blending in with the slightly transparent wall. Not only that, but trying to interact with things can be a little bit irritating given the small spaces to move around. Basically, it can take several clicks to unlock a door just because you haven’t positioned the cursor correctly.

The combat is also a bit of a hit and miss with me. I like the idea, I like how the battle takes place, I like the turn based action that forces you to plan out attacks, plan out retreats, and become a strategic master.

The thing that stumped me for a long time was that there was a game mechanic within called “Reckless”, which when the Shift key is held down, your character becomes, as said, reckless. The screen gets a sort of animated vignette of whiteness, and your attacks – if successful – will deal more damage. I’m also not a fan of how enemies are allocated two or three moves when your characters are only allocated one move each, but this is achieved because they’re using Reckless mode correctly. I seemed a tad confused with the system. Basically, if you don’t use it, you’ll only get one turn during battle, however, if you use it and your recklessness is successful, you’ll get another turn. This isn’t an experience based action, as  it is purely just luck. If you have more than one character in your team, then you get to really test it and can overpower the enemies without them even having a turn. 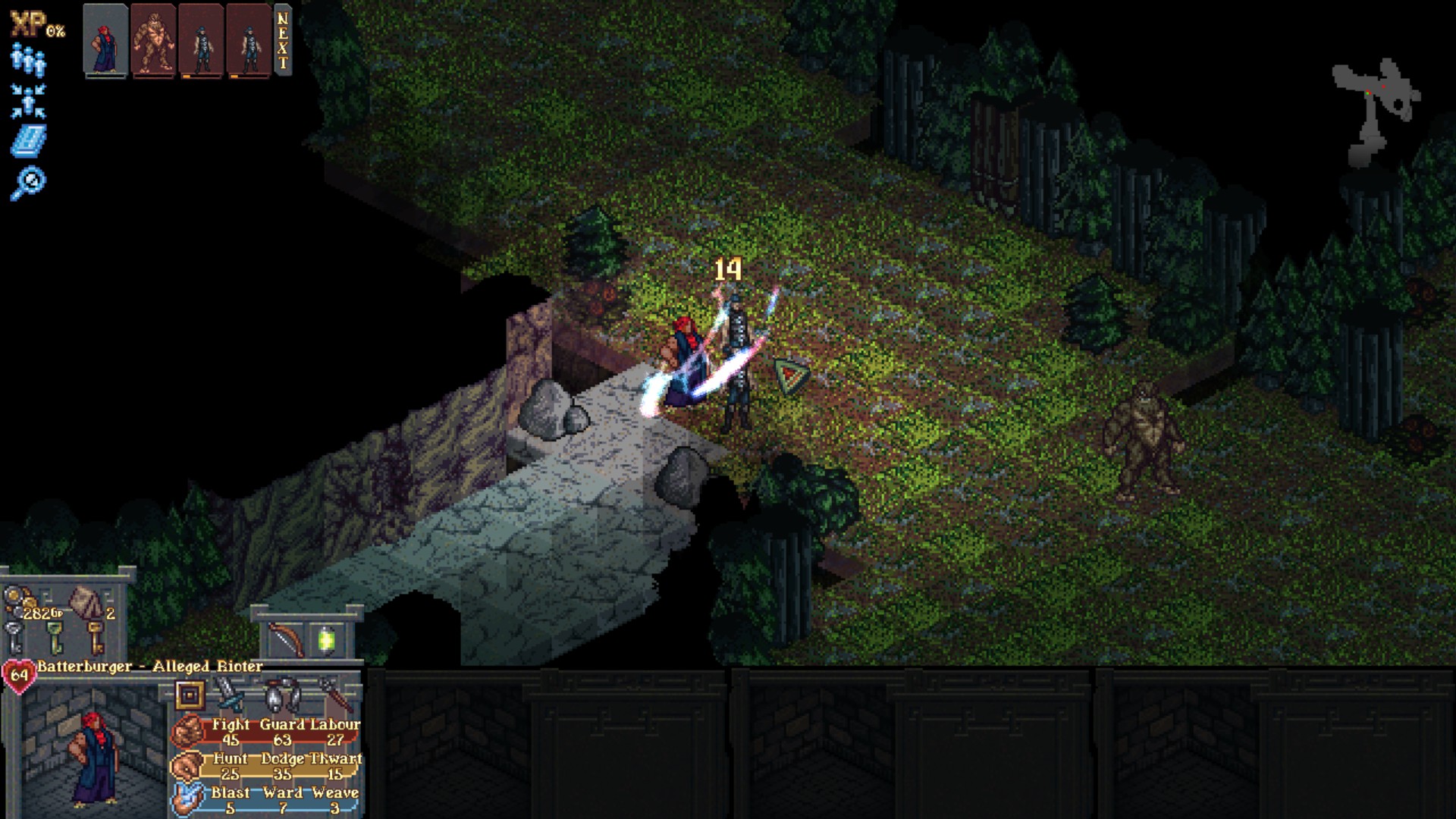 You partner up with the person who’s trying to help you escape, and as there are more than 1000 character sprites available thanks to the customisation system, you’ll probably have a huge range of different people. As you’ve probably gathered, the secondary character becoming involved introduces you to Bastard Bonds team system. You can – when not in combat – wander around freely as one character without any turn based system taking place. Hit tab to switch between the two, and if the other characters find themselves outside your/their moving space, they’ll automatically move along with you. You can share some items in your inventories between each other without having to hit tab.

You will no doubt find yourself witnessing your companion falling to the hands of death, although it’s not actual death. They’ll fall and vanish from the world, then when you find an exit door, before moving on, you’re given a board, with a concept based on Minesweeper. You’ll have one or more clicks to press on the board; hit skulls, no revive, hit a gem, wounds healed. 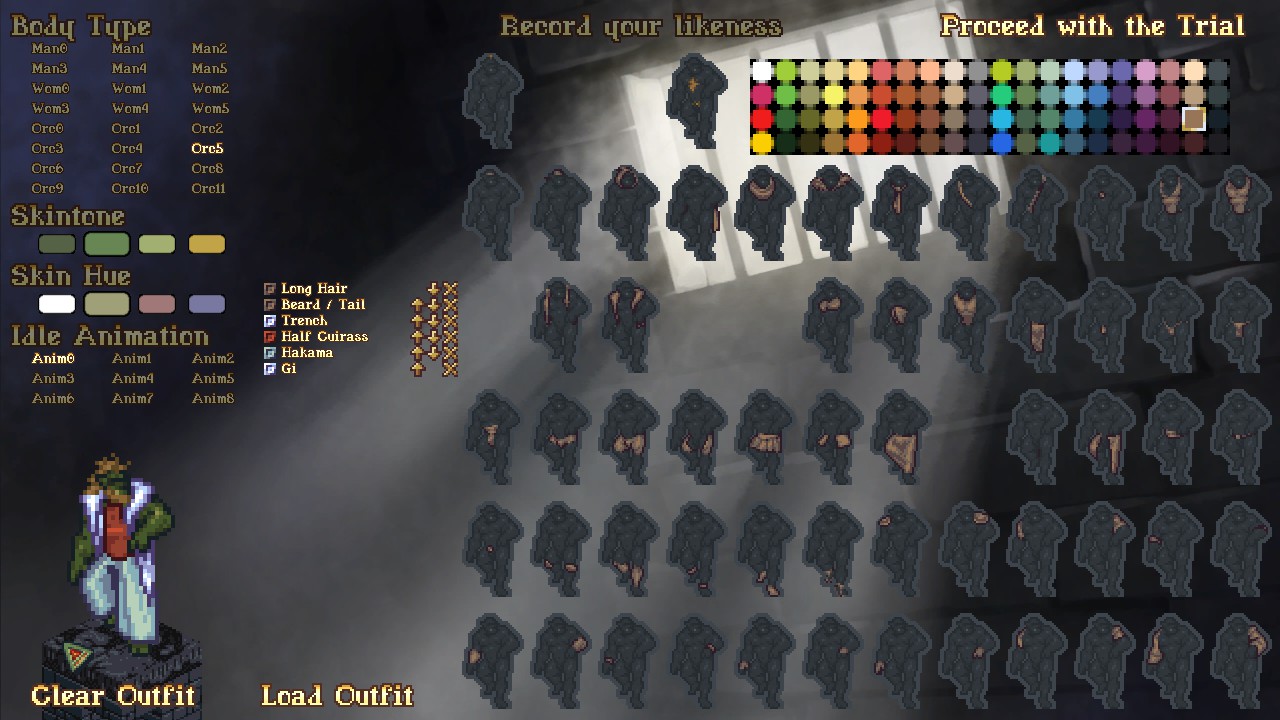 The only trouble with this is, that game is incredibly hard. The tutorial throws you right in there without much context besides a few signs with simple instructions on. If your companion dies during the tutorial, you can bet your ass you will too because it’s near impossible to beat alone. While I like that you get into the game, and eventually you start mastering the controls, I’m not a fan of how hard it is from the off.

The map brings you out to the whole island, with more than 200 locations, and each stage is a small walk away from each other, basically, there’s a lot of levels, and a lot of forks in the road. There’s also a stronghold system where you can hire characters to join your stronghold and make it, well, stronger. The way it works isn’t as simple as, “Click this slot, choose a character, done” you need to click a slot, which will leave it open for a character to join, then you have to head for a bit, do some killing, or if you’d like to call it, grinding. Then when you return, you’ll most likely find the slot has been filled.

The graphical style of the game is really rather charming. I really like the gritty pixel art, the dark shading, and the fantasy fonts. I like how the characters think or say things that appears as text over their heads, even if it is the same thing over and over, rising then fading away; although during combat it’s almost impossible to read and just adds to the mess of sword slashes, shield icons spanning over the entire character. There’s just so much happening.

The colours – despite there being a wide range of them available – seem to compliment older console colour schemes, the movements of the characters resemble the movements of board pieces being bounced tile after tile, there’s no walking animation, and the combat effects are shiny and smooth.

You’re accompanied by rather dramatic music throughout combat, intense music that raises the intensity of the situation. During moments of travel, there are calm, yet upbeat music to help drive the travelling forward without becoming a bore. The deep bass helps to solidify the tension of what could come next.

Bastard Bonds’ main menu hosts a background artwork featuring three characters, and they’re dressed, but the options contains a random option to flick demon mode on, which doesn’t affect the game at all, just the artwork on the title screen. Shield your eyes, it turns them naked. There’s also a character template system that allows you to build a character and choose it’s personality and image. I’d imagine the idea of this was to make the intro when starting a game shorter, however, even though I save the template, I’ve found I still have to go through the entire character process again upon starting a new game and loading the character.

Initially I wasn’t impressed with Bastard Bonds as it didn’t grasp me from the start, but after a while of playing it, it does grow on you, and it does become addictive, leaving you with the mindset that you can do better on the next try. The amount of choices that can affect the outcome of the game and the travelling makes you want to go through every crime that is available to you and see who else will join you on your escape.

For a Rogie-like game, boasting turn-based combat, and a top down adventure epic, this game is good, but don’t expect it to be gentle. You’ll enjoy it either from the off or eventually, and you may even come to love the intricate RPG elements.