You often come across a few nifty little titles that spark your interest when attending game events and one such title was Raiders of the Lost Island. Its premise is that it is a local co-op party game where up to four players work together to escape from a sinking island full of treasures, while each of them loots for themself.

I managed to play the game with another resident of Big Boss Battle, Dann, to which end we spent a few games playing with the developer and asking various questions. Alexandru Simion is the lead gameplay programmer by day and an indie developer by night. When asked, he announced that he was planning to release the full version of Raiders of the Lost Island in 2018, on Steam and Itch.io. 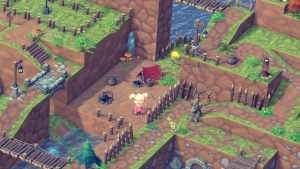 For the bulk of Raiders of the Lost Island, it is up to four funny adventurers to explore a sinking island under the constant threat of the rising waters. They must work together and collect resources to quickly build a raft and escape before the final wave washes them away. If they fail, they all lose together! However, the island is full of treasures: gold coins, gems and the most expensive diamonds. So it’s hard to resist temptation and going against your fellow player. Doing so will put your friendship to the test, because if they manage to survive, only the richest one will stand in front. Moreover, the others just helped them win. Ouch.

This was certainly an interesting concept and we soon found ourselves switching from attacking each other whilst avoiding the rising water to searching for coins. One game, I had accumulated a huge bundle of wealth, only to fall at the last minute, slipping on the level and killing myself. This then allowed my fellow players to grab my loot and victory.

We only managed to play the demo level, which was well designed to ensure a blend of dead ends as well as mini hubs, allowing for more diverse gameplay. Areas had potential pitfalls which, traversed incorrectly, spelt instant death. Add this to the constant threat of being attacked and the games became quickly a tense and nerve-wracking affair.

Speaking with Alexandru, he confirmed a variety of different character models as well as potential weapons are being considered for implementation. This would make the Raiders of the Lost Island much more replayable than the base game we saw. 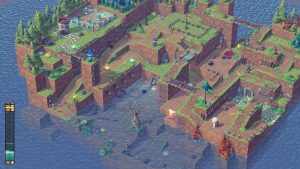 The visuals of Raiders of the Lost Island ‘s characters reminded me of the avatars from a Wii-U — delightfully cheeky and fun-looking. Where the overall level design was a fresh, bright, clear landscape which would fit in any Final Fantasy world.

Raiders of the Lost Island is still early in development and will have many more levels and characters added before launch. This cheeky little four-player was a delight to play and shows that there is still life in four-player co-op games to be had. We shall be keeping an eye out on how this develops and reporting accordingly.

For more information on Raiders of the Lost Island, check out the game’s website.