Professor Evil and the Citadel of Time review — On the clock 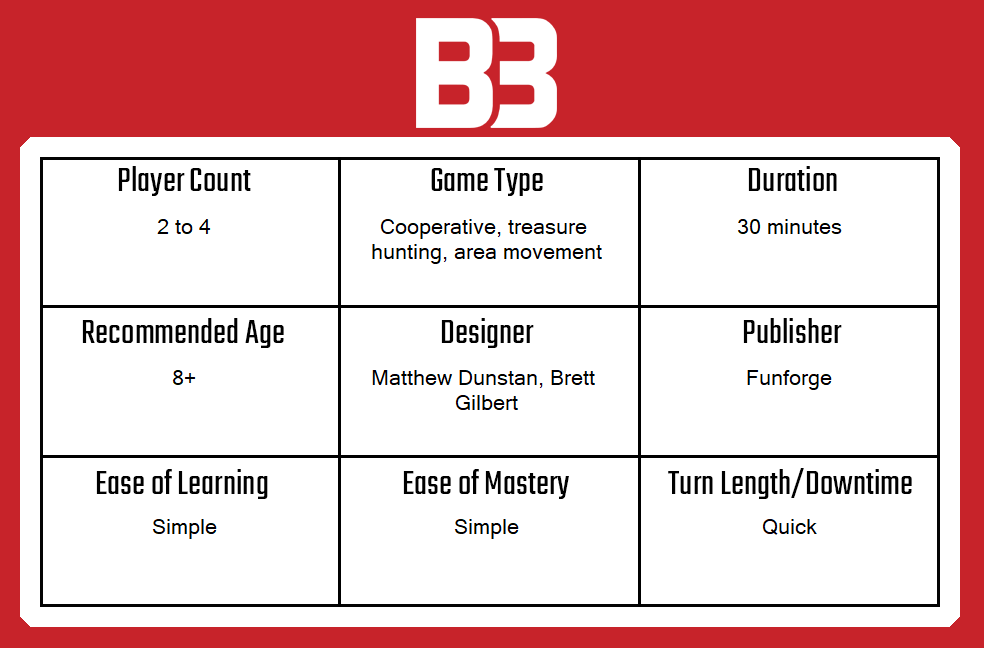 If you’ve ever wondered what the term “gateway game” meant, then look no further, because you’ve found it. Alongside Ticket to Ride, Carcassonne and Catan, there are only a select few games that I would risk my friendships on when it comes to attempting to teach someone who either isn’t interested (or isn’t experienced) to play board games. Professor Evil and the Citadel of Time is most certainly one of them; let me tell you why.

Firstly, don’t let the title fool you. Professor Evil is nothing of the sort — he doesn’t dismember anyone, imprison them in carbonite, attempt to eat their brains or do anything even remotely aggressive. The worst he can do is kick anyone he catches out of his mansion, although the evicted player will still be free to re-enter on the next turn. And they’ll need to because Prof. Evil and the Citadel of Time is a game about pinching treasure and every second — every turn — counts if you want to maximise your cooperative point-scoring capability.

Professor Evil and the Citadel of Time is a cooperative game about stealing from a bad guy then, and it takes place on the same board every time, albeit with a fair bit of randomisation with regard to the details on the board. Professor Evil has laid a number of traps, closed all his doors and placed his treasures strategically about the place in order to dissuade would-be thieves, but our crew is not so easily turned away.

Using the unique skills of each player characters (and their one-time use superpower, once activated) players will roam the mansion, avoiding the automatically controlled Professor, attempting to disarm traps. When certain combinations of traps are disarmed, it becomes possible to steal certain treasures. Act too slowly though and a timer for each treasure will run out, condemning it to, umm, the box, until at least the next game… 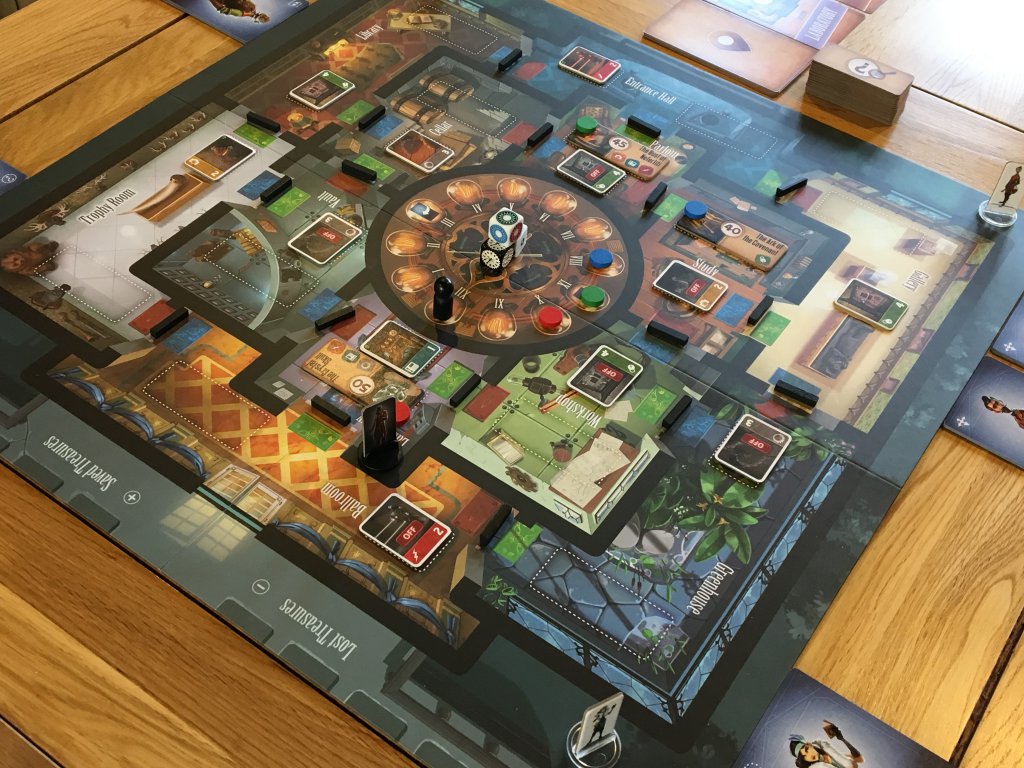 Honestly, Professor Evil and the Citadel of Time looks great. It’s made from lovely, smooth cardboard with a nice, soft matte finish and the artwork is bold and colourful. Each of the characters (including The Professor) is represented by a standee, whilst the treasures all have a wooden token placed on them, as well as one of the matching colour on a central clock face that counts down the minutes until they disappear.

Each player has a deck of oversized cards that display their abilities and these are drawn at the beginning of each turn, subtly randomising the abilities of each player without ever compromising their core ability — I mean, one simply doesn’t mess with the Mistress of Time, does one? The characters are diverse and well realised, with superb artwork and real personality — think of the art style as a cartoonish impression of the 1920’s and you won’t be far wrong.

There are a few more pieces that make up the game; a few custom dice, large cardboard tokens for the treasures and small (admittedly fiddly) wooden bars that act as doors. The manual is excellent as well, and in true gateway game fashion, it had me up to speed with what I needed to do in the game and how everything worked within about fifteen minutes. A few practice turns later and I knew exactly how to teach the game and how to play it. This, I should say, is what I’d like from as many of my games as possible. 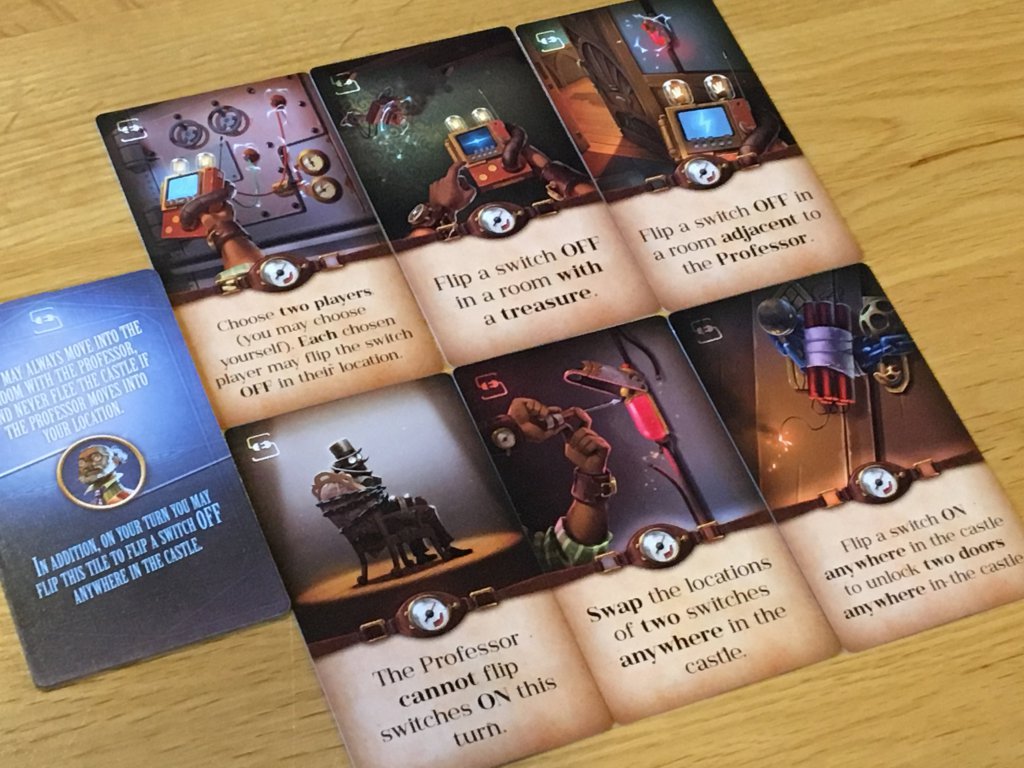 Professor Evil the Citadel of Time is one of those games that is so simple that it’s likely that I’ll make it sound more complicated than it is simply by describing it. Turns last about a minute or so and simply consist of the active player drawing their two action cards, taking three actions and then playing one of their cards. Actions are basically limited to move a space, open or close a door, switch a switch or collect a treasure. Cards vary, but most of them allow the player to break the normal rules in some way.

Once the player has done everything that they need, or want, to (usually some combination of the above that moves the collective team closer towards gathering their next treasure) then they must roll for Professor Evil and his Citadel of Time. Professor Evil will often move through the mansion based on the combination of faces shown on his two die — if he enters a room with a player in it, then they’ll be ejected, just as I mentioned at the beginning of this review. The Citadel die simply shows how far the clock will turn — if it reaches one of the coloured tokens that sits on a treasure, then that treasure will be removed from the game.

The player abilities do introduce additional complexity, but none are more complex than the cards explain. For example, you may be able to remove four or five doors on a single turn, but if you do, you might then need to roll the Professors dice twice. Some abilities slow the clock or affect other players, but none are game breaking by any stretch of the imagination. The players win if they can secure four treasures, whilst they lose if the Professor manages to reclaim the same number. 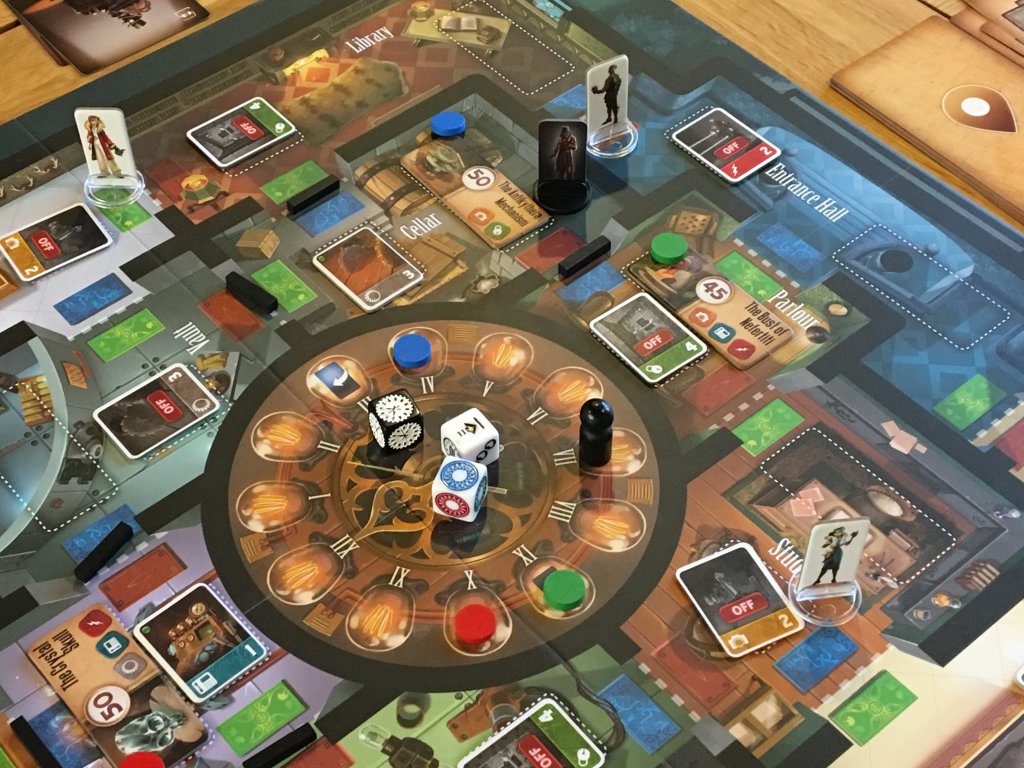 Playing Professor Evil and the Citadel of Time is all good, light fun and it retains a relatively breezy feeling throughout, despite also introducing a reasonable amount of tension as a result of the countdown towards each treasure being removed. What might begin as a simple gateway game can also be ramped up in difficulty by making just a few slight tweaks to timing and other factors, as explained in the rule book.

Professor Evil and the Citadel of Time is easy to set up once you understand the randomised nature of the switches and treasures, so it can be ready to play in minutes, or replayed just as quickly, should your gaming group decide that it’s a game they have enjoyed and want to see more of. On that note, it takes less than an hour to play a game from start to finish (including setup) so it’s a great game for either beginning a night of heavier games, or closing one out with something fairly undemanding.

On that note, perhaps the downside of Professor Evil and the Citadel of Time is that for all its inbuilt randomisation, it doesn’t really change from one game to the next. As a result, this is a game with long-term appeal if played in moderation and it will certainly see more play with children in the eight to twelve years kind of range. Adult gamers might struggle to see long-term appeal beyond the first four or five plays, but given that it retails for a sensible price, that’s still very good value for money. 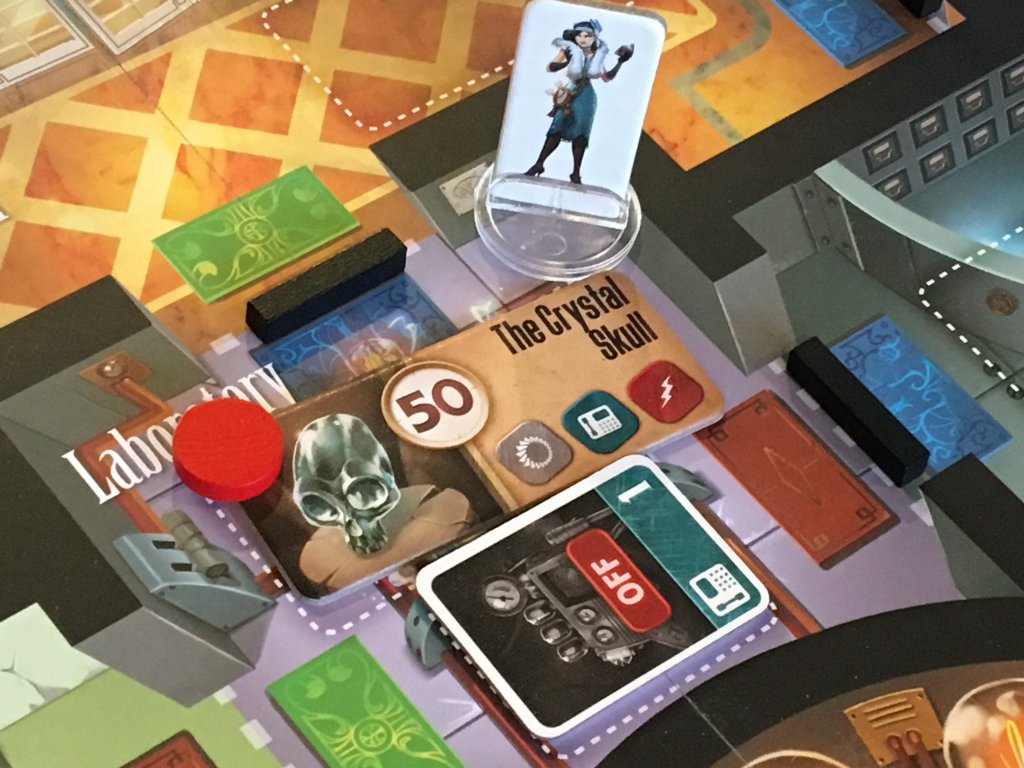 I was surprised by how much I enjoyed Professor Evil and the Citadel of TIme. It’s so easy to setup and teach, as well as to play that I think it’s a fantastic introduction to modern games. It introduces concepts like variable player powers, efficient use of actions, managing multiple priorities and even very basic hand management. Luck certainly does play its role here, but there are no inherently bad die rolls — sometimes you’ll need to push your luck and you’ll be in the wrong place at the wrong time, simple as that.

I enjoyed the idea of pinching treasures from an evil professor and this is a game in which mechanics and theme are linked well and truly together. The countdown, the switches, the treasures — the way that doors delay players just enough to upset their plans; it’s all here. I’m not going to suggest that Professor Evil and the Citadel of time does anything truly unique, but it does bring several mechanics together and make a simple, fun and rewarding game from them.

Tokaido review — A gateway to discovery