Induction is a wonderful, charming puzzle platformer played from the top down perspective. It breaches new ground within the genre by mixing in elements of temporal control.

Induction is bright, it’s vibrant, it’s an eye popping visual treat, and it’s a game that will make you think harder than you’ve ever thunk in your thinking life. 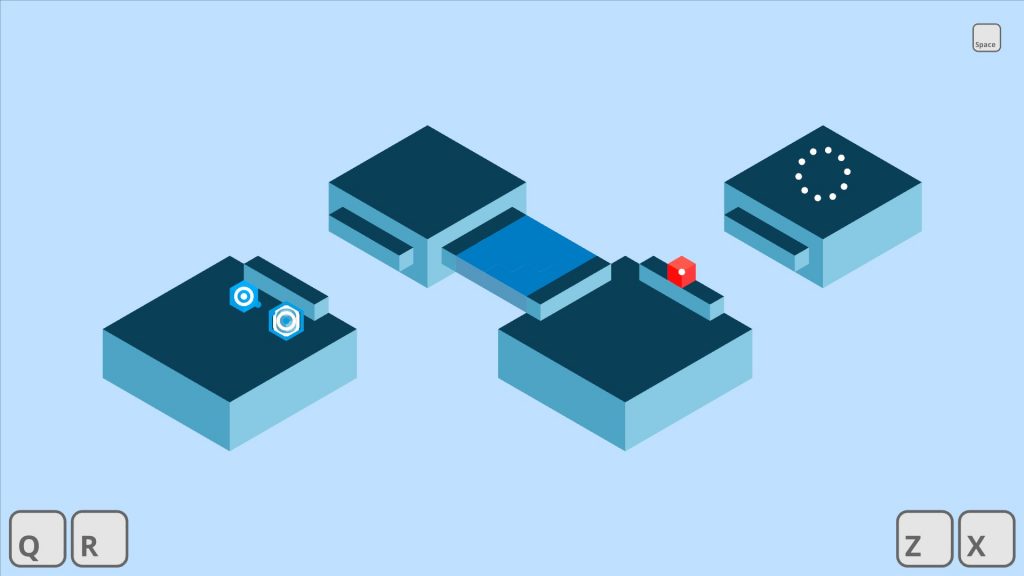 Before I jump into the gameplay, let’s talk about the graphics. I mean, the graphics are, in my opinion, what gives this game it’s charm. At the end of the day, you can’t really make a box charming, unless of course you want to call it a companion cube and throw a heart on it…but Bryan Gale, the developer of Induction, has managed to make not only the box cutesy, but the world around it how a wonderful minimalist charm. It’s totally uniform throughout, from the style of the menu, to the actual worlds themselves. 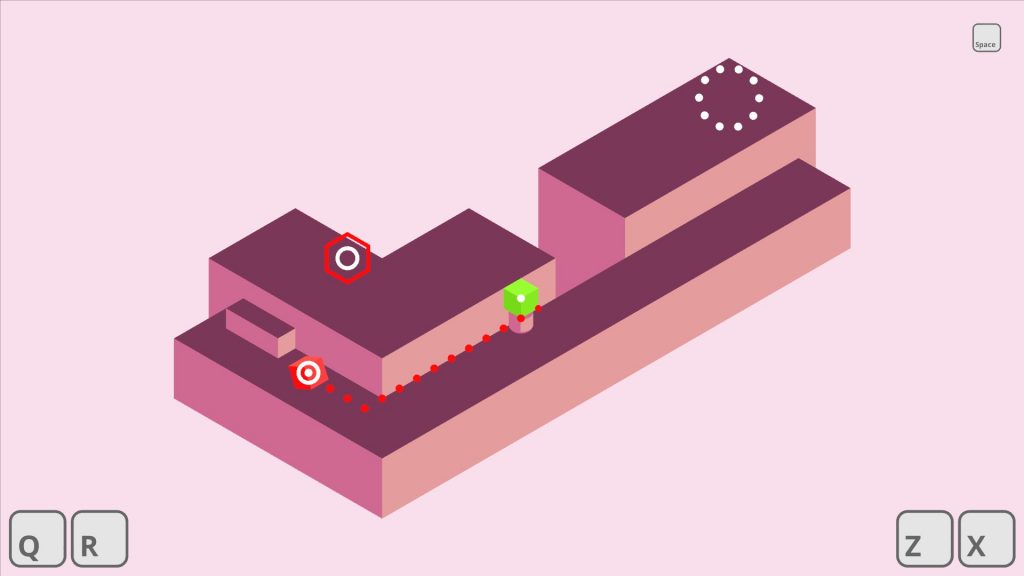 Your world is suspended in empty space, floating central to the screen, scaled to fit. There’s a turn of phrase – “Less is more” and especially in this case it’s right. The colours, vibrant, and the solid coloured background sits brightly, while the foreground world stands out from being a few shades darker from the background with it’s 3D elements.

“This is a game that has been very well thought out, although it could really do with the option for hints.”

Gameplay time. It’s a puzzler so it’s got to make you think; it does that wonderfully, although there’s a twist – a really, rather confusing one. This is introduced during the tutorial, where it explains to you the basics of moving around, but then, just when you think it’s going to be a good ol’ simple game, it tells you to press the space bar…suddenly it changes the game! A circle will expand from within the cube, changing the colours of the world to another colour. This means you have started the paradox system where a past version of your cube will mimic the movements you made prior to hitting the space bar, your cube can still move willingly in the world during this time. Not only that, but with the Z and X keys, you can control the time by reversing or speeding up.

At first use, the time control is relatively easy to control, it’s the paradoxes that can be confusing. Give it enough time and…well, it doesn’t really get any easier. Each level ups it’s game. It’ll introduce buttons, bridges, and platforms to scale. I spent about a day on one level because I couldn’t get the timings quite right, which you’d find to be frustrating, but it’s actually quite engaging.

You will find yourself using personal equations, muttering to yourself, “I need to move up 2 spaces, left 4, and then hold for 7 seconds.” and that’s because you’ve got many levels where you need to move a block a certain amount of spaces for the past you to copy, the difference is, you’re creating these movements in preparation for another platform that you can’t reach until the past cube has been commanded correctly.

Don’t think that this is where the difficulty ends either – as new mechanics, paradoxes are introduced the complexity scales massively.

There are barrels that have to be placed into their outlines, these outlines will activate something in the world, be that bridges or platforms. You also get the block outlines where you’ll need to get a block, either yours or your past self, inside it while you or the past cube go and do something else wherever that outline activated. Then there’s the nice finish circle you have to get inside to complete the level. You’ll be incredibly thankful for reaching it after some levels.

The sounds are even simplistic, the cute little cartoon, “ting ting ting ting” of the boxes movements, that turn into a deep, “Dink dink dink dink,” when on a bridge. The gentle ringing out when an activator is activated, and the magical, soothing soundtrack that lingers around ensuring you are concentrating and relaxed. This is all the wonderful handiwork of Tim Shiel (whose excellent work can be sampled over on his bandcamp.)

This is a game that has been very well thought out, although it could really do with the option for hints. They would have been massively helpful in the more complex levels, with their capabilities to stump you for far longer than often bearable.

If you’re into artistic, minimalistic puzzle games that offer something a little different then this is a game that you’ll want to keep your eyes on, as it looks as though through further development it could really turn into something outstanding. I’m looking forward to seeing what else can be added to the worlds, and I hope that no matter the extent of content added in the future it will keep it’s accessibility.

Induction will be available on Windows, Mac, and Linux, and can be found on the Steam store.