Sometimes a game comes along and it’s boiled down tropes into something so simple that it almost seems brand new, but then you blink and realise that what you’re looking at is closer to the point of origin for the whole thing. Ozymandias does this with territory control, and it’s magnificent.

It certainly seems that a lot of strategy games these days, particularly 4X strategy games, are attempting to become more memorable by deepening or conflating their mechanics. Refreshingly, Ozymandias strips it all back to a handful of armies or navies, light economy management, city positioning and a single-screen tech system. Not only does it take it back to (about as close as you can get to) basics, but it’s actually really, really fun to play.

Maybe I shouldn’t hark on about simplicity though, because Ozymandias is still a beast of massively interconnected options, and it plays at a scale and pace that might take some getting used to. Territory claiming is quite literally that, with resources spent on ‘flags’ to claim each of the tiles. Costs vary depending on the type of terrain, and the tech tree is based entirely around boosting and refining your growth and earnings by terrain. This means that it’s vastly easier for players to stretch out over big gluts of similar land – specialising in claiming deserts or woodlands can result in a surge of expansion when you reach those areas on the map.

However, it becomes harder to claim the land as it gets further and further from your population, so you’ll need to build cities, and, once the map is all wrapped up, you’ll want to have a strong military to apply pressure to the realms just outside your borders. 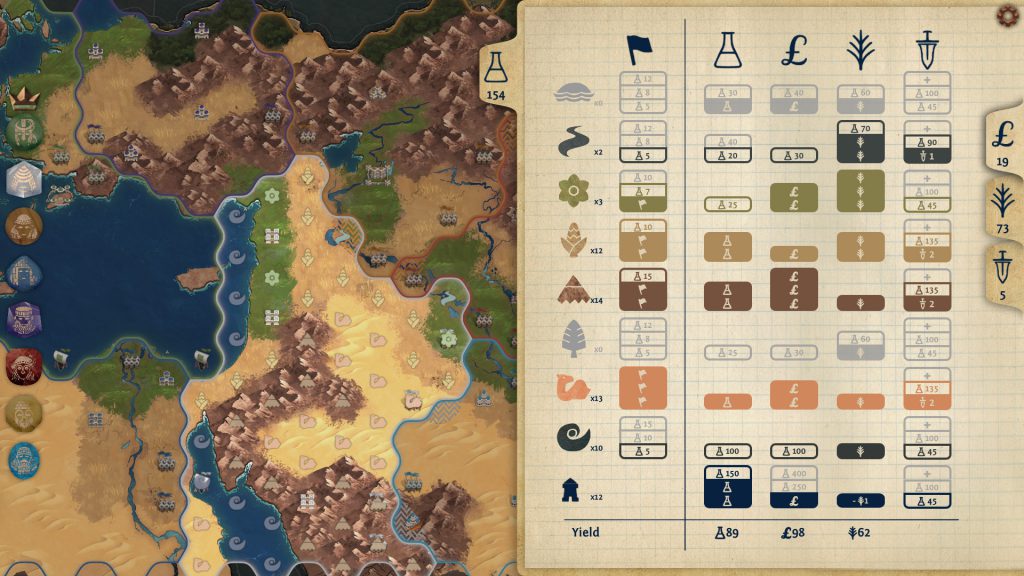 But, victory isn’t actually about claiming everything on screen. There are different objectives, under the guise of wonders, in different situations. These come in the form of capturing cities, claiming a certain number of tiles, accumulating wealth, your empire including a certain amount of cities and more. This needs to be taken into consideration early on because, as I found while playing, this can completely turn a strategy on its head. There are also smaller, non-victory condition objectives or bonuses that can pay out or reward based on smaller milestones like having x grassland tiles, or buying x of a tile in one turn. These are more than enough to disrupt a lead, and as you can have three of these at once, they can really turn things around.

Ozymandias certainly might not look like anything new, but fans of 4X who want to be able to crush through a game in one sitting will find it to be a fantastic, condensed example of what the genre can be. I recently played through the tutorial and a few single-player levels while at WASD, and am really looking forward to playing more.

Ozymandias is expected to launch for Windows later this year.