The Hand of Merlin says Multiverse-Schmultiverse

Imagine if anyone actually knew much more about the legend of King Arthur besides something about knights and a round table? Imagine if the legendary wizard Merlin were the original Doctor Strange? Well friends, imagine no more — because in Hand of Merlin, you can learn all about the legend whilst visiting unlimited parallel worlds in the form of a turn-based RPG roguelike.

It’s a fairly heady mix then, this Hand of Merlin business. And it’s also very clearly an indie PC game ported recently to console. Yes, this is a game with an interface that could not be more suited to a mouse and keyboard if it tried to feed you pieces of cheese through the screen. The character selection screen (which you’ll see quite a bit of) is the first sign of this. An X and an A on both sides next to each character… Press one, press the other… Will either add a character to your roster? Probably, but only if you hammer them both randomly. 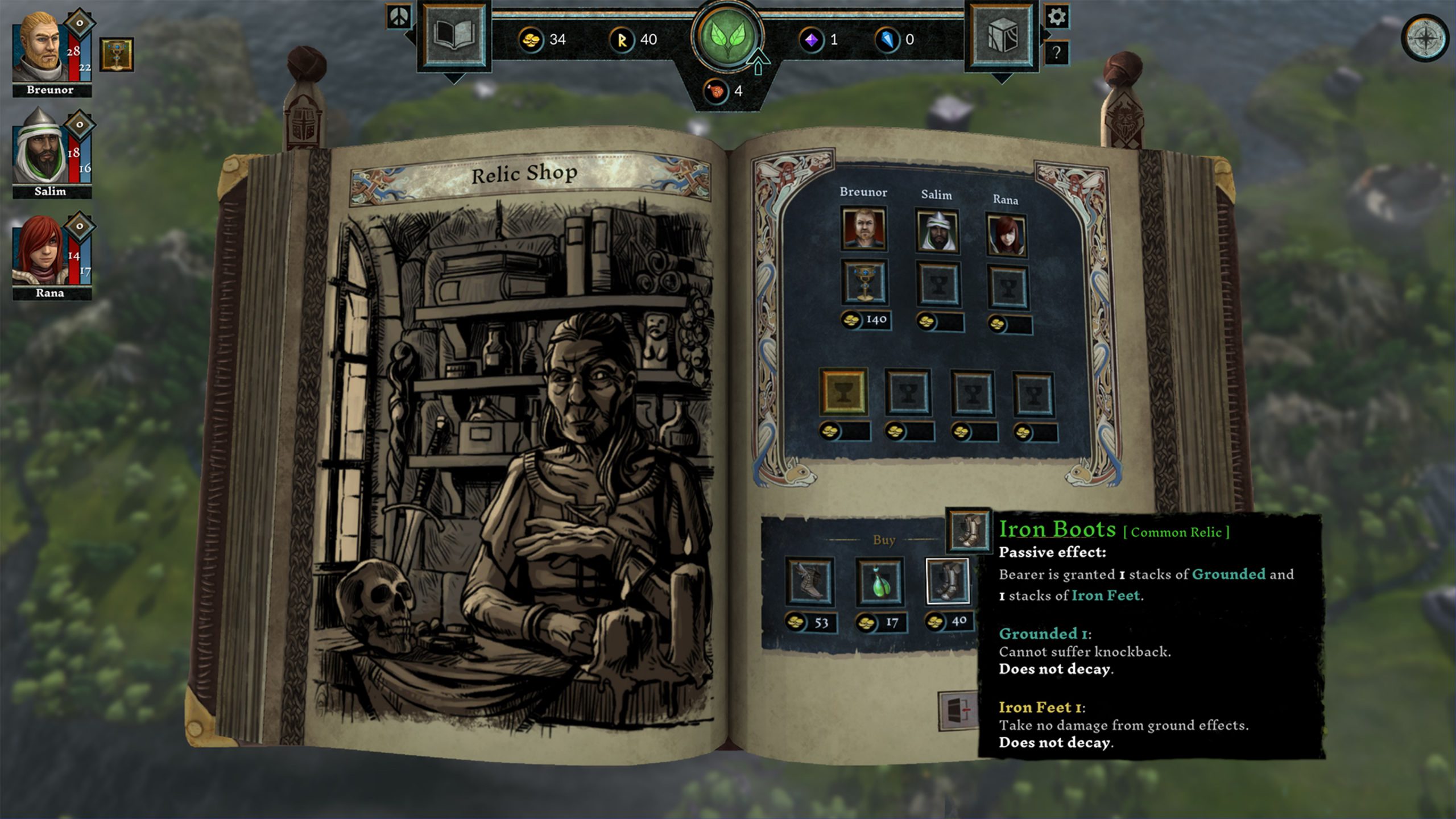 Anyway, that aside, you’ll only have three characters to choose from at the start: a fighter, a ranger and a cleric. An eagle-eyed wander around the selection screen will reveal the fact that each character has at least one alternative class though, and that there are around three other characters per class — each with their own unlock condition. Very good really, because as you’ll learn, the characters in Hand of Merlin are quite varied and fun.

Now as I mentioned earlier, Hand of Merlin is a roguelike game. That means that when your characters die, they die for good. If one of them dies, there’s a high chance the others will, because as far as I can tell, the following encounters won’t scale down to save your blushes. To help players feel that they are still making progress, they can collect essence which unlocks Merlin’s spells from one playthrough to the next — and apparently, it’s also possible to retain a single relic via your stash, but that hasn’t “worked” for me during testing.

Each run (because that’s what a playthrough of a roguelike is called nowadays) consists of working your way through four initial regions, the fourth of which is basically so small that it doesn’t count. The other three — broadly speaking represent Britain, France and Spain and feature characters and concepts from Arthurian law and the tales that surround the Holy Grail. The final location is a sort of underworld, but you won’t be there for a long enough time to really explore it or to pick up much lore. 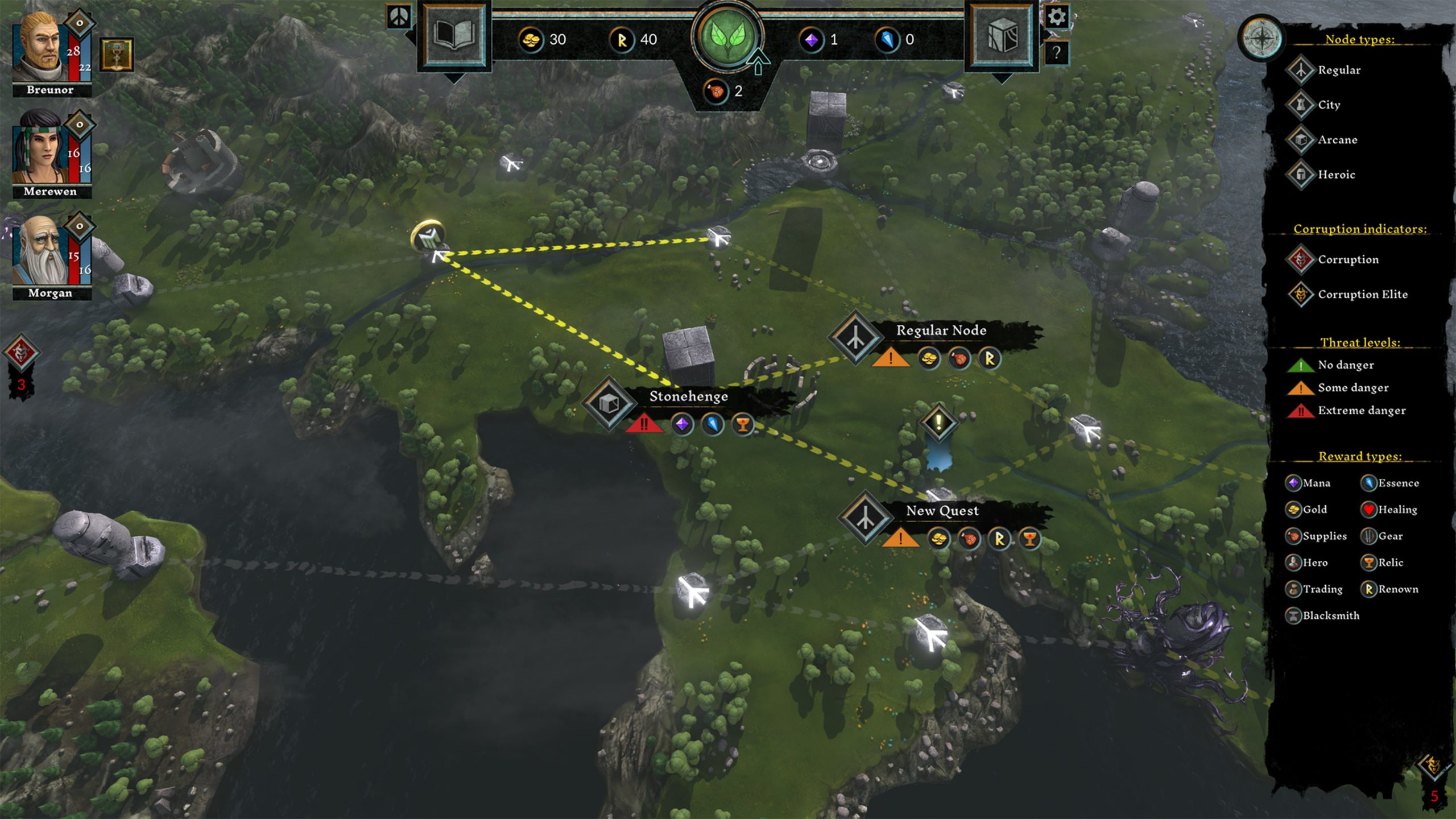 All regions — including the final one — are split into nodes, which are further split by types — regular, heroic, arcane and city as well as difficulty. The player party is compelled to move broadly from the left side of the region to the right, where a final encounter will take place. There’s no way to go back towards nodes you’ve already passed, and the idea is that you can therefore only reach certain nodes on each run.

Regular nodes tend to produce a fairly random range of encounters including anything from bandit and low-level corrupted (monster) fights to donations from well-meaning peasants, or even riddles to solve. Some of these feel worthwhile and interesting, whilst others I didn’t even bother reading — I just take the reward. There is a slight issue here in that after maybe ten runs, I feel that I am seeing a lot of repetition among these, and certainly more so than I did in similar games like Thea 2, for example.

Other nodes are more interesting and offer generally better rewards and more interesting fights, however, the downside to them is that I would say that the repetition is much, much greater. Sometimes you’ll face the same encounter at the same place in every game (I guess like a story location) which for a game that is quite short, is annoying. I also found that many of the relics in-game repeat, so there’s no sense of true exploration or excitement like you have in runs of say, Rogue Legacy 2 where everything feels very new, almost all of the time. 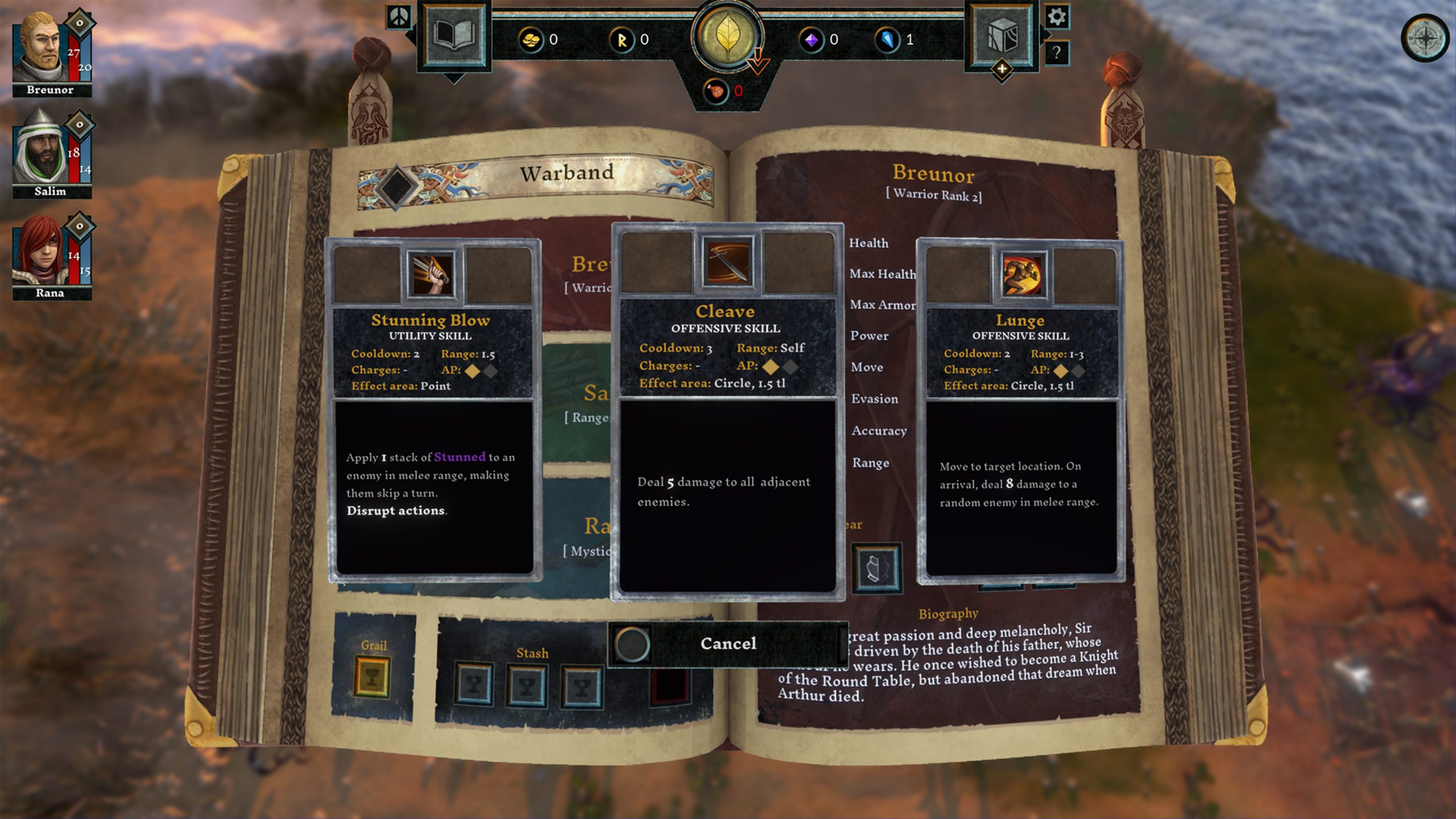 The thing is, this might all seem quite downbeat so far, but I actually really like Hand of Merlin. Whilst some of the random scenarios and relics feel a bit limited, the upgrade system is simple and quick, whilst the game really shines in battles. Here, your trio of characters will face odds that seem broadly fair in most situations, and when they are not, you can often draw a line to where you made the mistake — you probably weren’t cheated out of victory.

All combat is done on a turn-based, isometric plane that pits up to six or seven enemies against us. Each character has both health and armour, with most hits dealing damage to armour – but health being the attribute that determines if a creature dies or not. Effects such as burning, piercing, slowed, stunned, poisoned and many more are at play here too, and when you level up a character you’ll always either gain a new ability (levels two to four) or upgrade an existing ability. This very much locks your characters in each run to a particular archetype.

What I really like about Hand of Merlin is how the party begins to feel as you work your way through each run. Each isn’t that unique on the overworld maps, but in battle, you really get used to how each character performs. In one run, your fighter might be an absolute tank — in the next they might be more able to hit and run, whilst a ranger with a brutal melee attack can pick up some of the slack. Sometimes your mage is a glass cannon — sometimes a powerful support fighter. 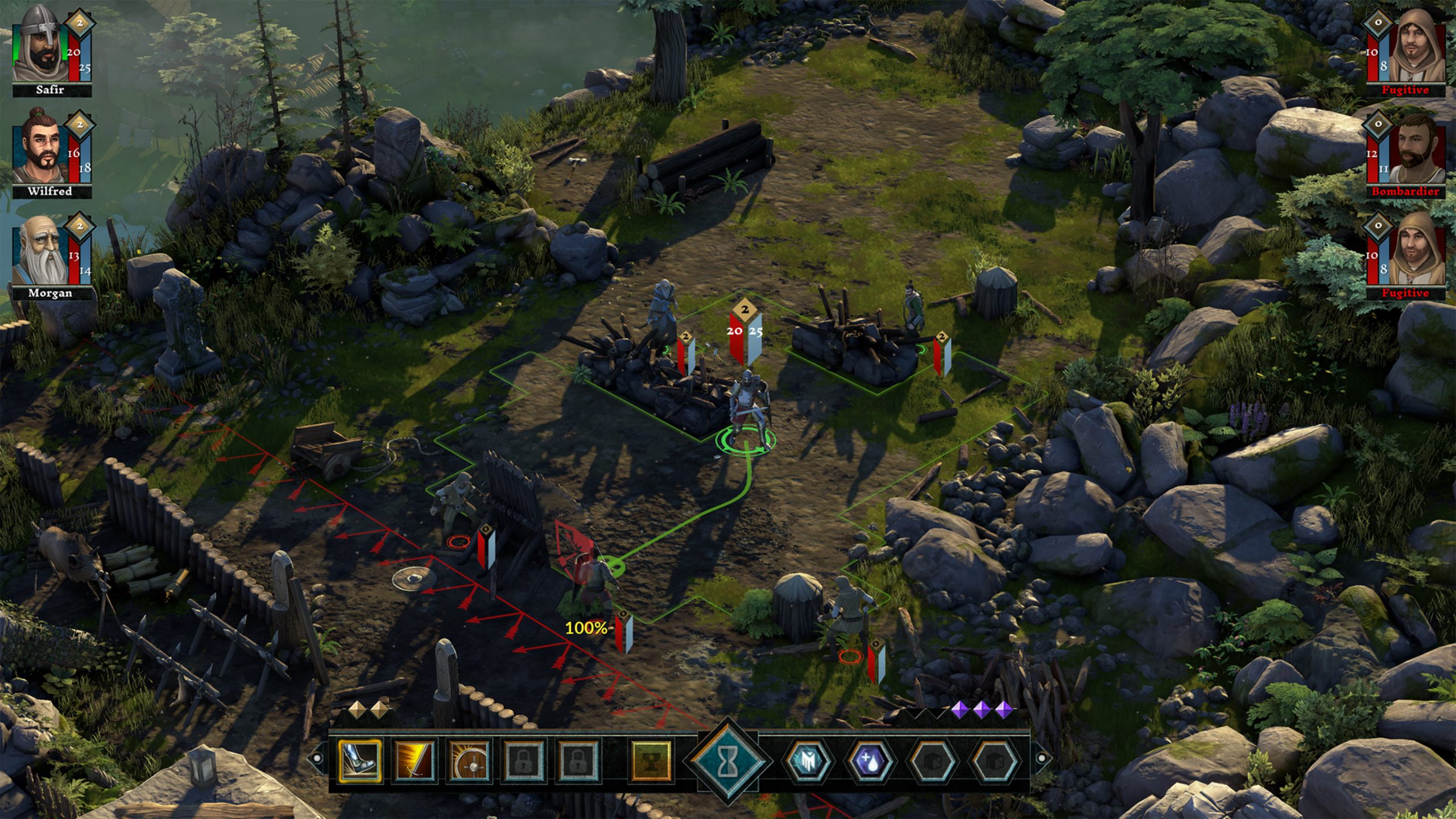 If I have one complaint about the combat, it’s the endgame. In two or three playthrough, I breezed right up to the end but then had absolutely no chance of defeating the final stages — and I do mean none. The issue that turn based RPG’s will always have is that sometimes you can play a perfect round, ensuring that every turn is maxed and suffer zero missed shots, and you still lose. I wish that perhaps a little more from each run would carry over to mitigate this, because it is entirely possible to reach the end game having found no essence or unlocks and simply die with nothing to show for it.

Still, Hand of Merlin is a very unique and interesting take on the brutal, turn-based roguelike style of game that first appeared with The Banner Saga and similar games. It can be frustrating at times and sometimes there is a bit of repetition, but overall Hand of Merlin is fast paced, fun experience that has a lot of depth within its combat. It also tells a broadly interesting story which is strangely underused in videogames, and as such, I think it’s well worth a look.

Hand of Merlin can be found on Xbox, Playstation and PC.

Yaga — Take on an adventure

Into The Dead 2 — A headlong hike into zombie hordes