My Little Scythe is more than a baby step, but it’s no Giant Leap

Sometimes, a game is designed specifically to break the mould. New games are released every day that layer in crazy new mechanics over the top of traditional ones, ramping up the complexity to dizzying new heights. Others are the opposite, specifically designed to introduce new players to the hobby. My Little Scythe is neither of these, and it fits in a unique niche more or less on its own; that of helping younger players (very specifically) make the leap to more complex games.

My Little Scythe is a relatively simple game for adults to understand, but it is by no means a classic gateway game, and that makes it hard to classify. Much like its bigger sister, the immensely popular Scythe, My Little Scythe tasks the players with completing several distinct tasks — four of them to be precise — from a possible eight. 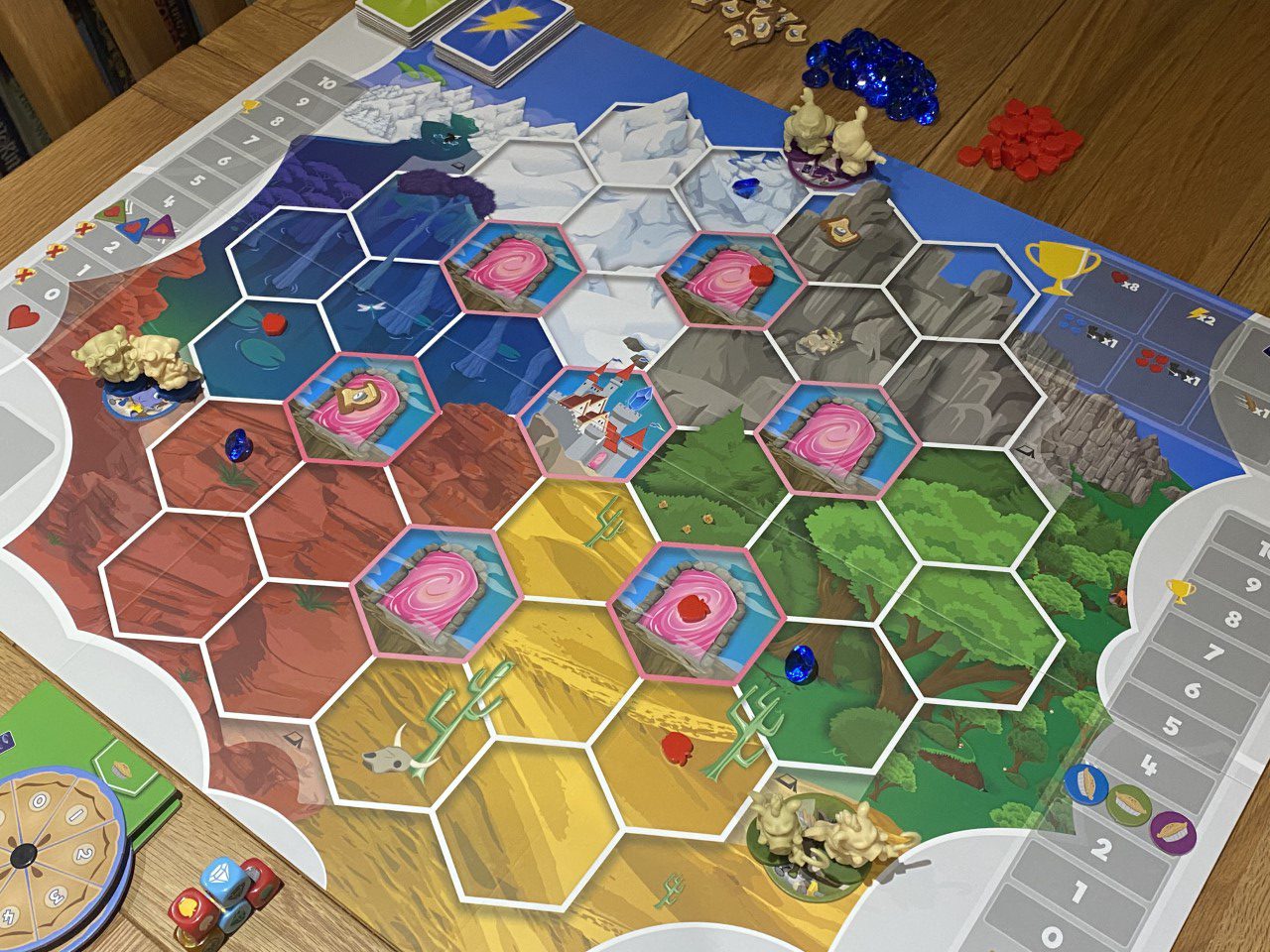 These tasks (called Trophies in the game setting) are reasonably diverse and include delivering apples or diamonds to the central castle, completing micro quests, winning a pie fight, upgrading your actions or gaining strength or love (two of the in-game resources) to a certain level. One of the reasons that I say My Little Scythe isn’t a classic gateway game is because having such a wide variety of win conditions is pretty much the opposite of most entry-level games.

And yet, despite this landscape of big choices, My Little Scythe does a few things that help its younger target audience (of eight years and up, although I played it with a six and a four year old) remain focussed. For example, those quests I just mentioned, well when you draw one, you can usually “resolve” the quest in one of two ways, or simply ignore it and take a bonus. The main thing being that you do it right there and then — or you opt out. 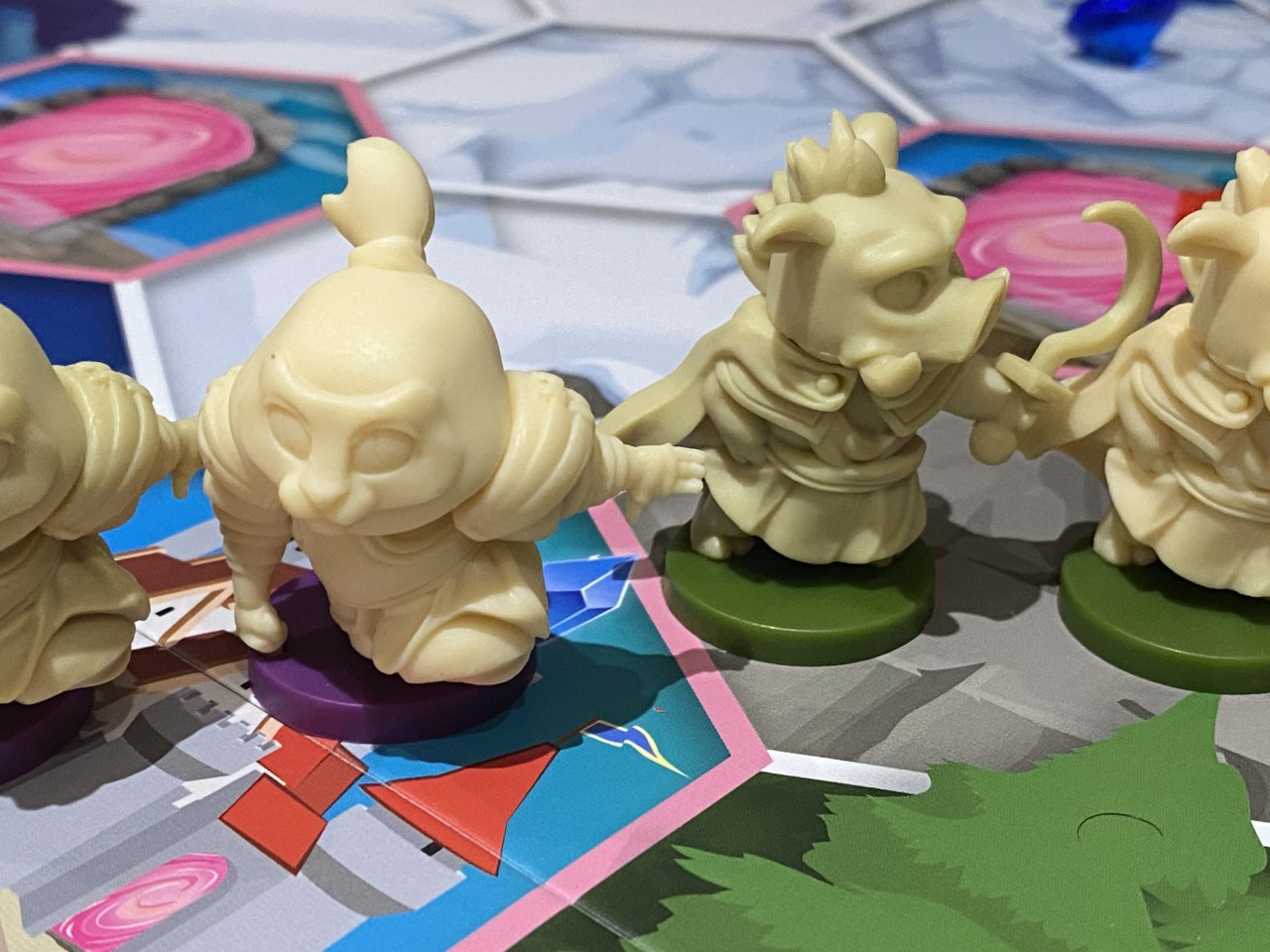 When you upgrade your player board, you simply choose which of two spaces (move or make) that you wish to upgrade, then you pay in one of three different and fairly diverse ways. The point of both of these examples is that for all its breadth of decision-making, younger players never feel frustrated because they can’t do what they want. My Little Scythe might include the scope to make frequent bad decisions, but that’s all part of the learning process, and the main thing for kids is that they can make a decision and feel good about it.

My Little Scythe also looks fantastic, albeit somewhat overproduced depending on your perspective. In the box you’ll find a massive board split into coloured hexes representing mountains, water, tundra, forest and so on. Onto this you’ll place a base camp for each of up to six players (very generous) and add their two Seeker miniatures. Each player colour is represented by a different pair of animals (ram, monkey, warthog etc) and whilst both models in each colour are identical, the sculpts are big, chunky, detailed, tough and beautiful. My kids absolutely love them. 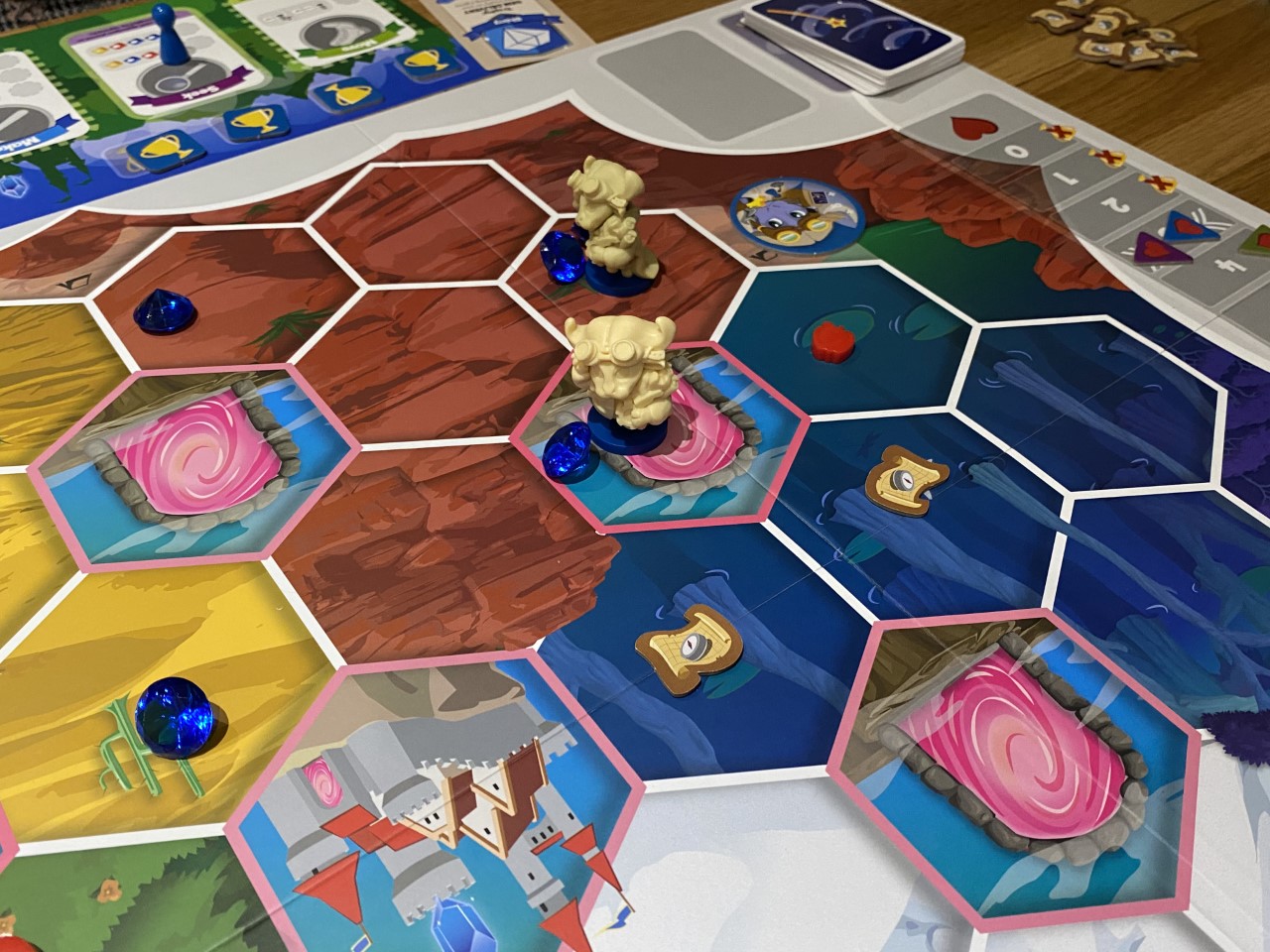 Over the course of the game you’ll draw from a handful of very clearly marked cards that feature simple instructions and clear symbolism that is perfect for kids who can read to a basic standard. You’ll also use a “Search” ability to find quest tokens and plastic apple and diamond tokens that will end up all over the board — these latter two components are oversized and look fantastic — perfect for little fingers!

In terms of actual gameplay, My Little Scythe keeps it simple, whilst capturing both the basic structure of Scythe and its own understated objective to take its target audience on a journey from the very basic games that they probably know, to something more interesting. Each player receives a player board and simply chooses one of three actions — Move, Search or Make. 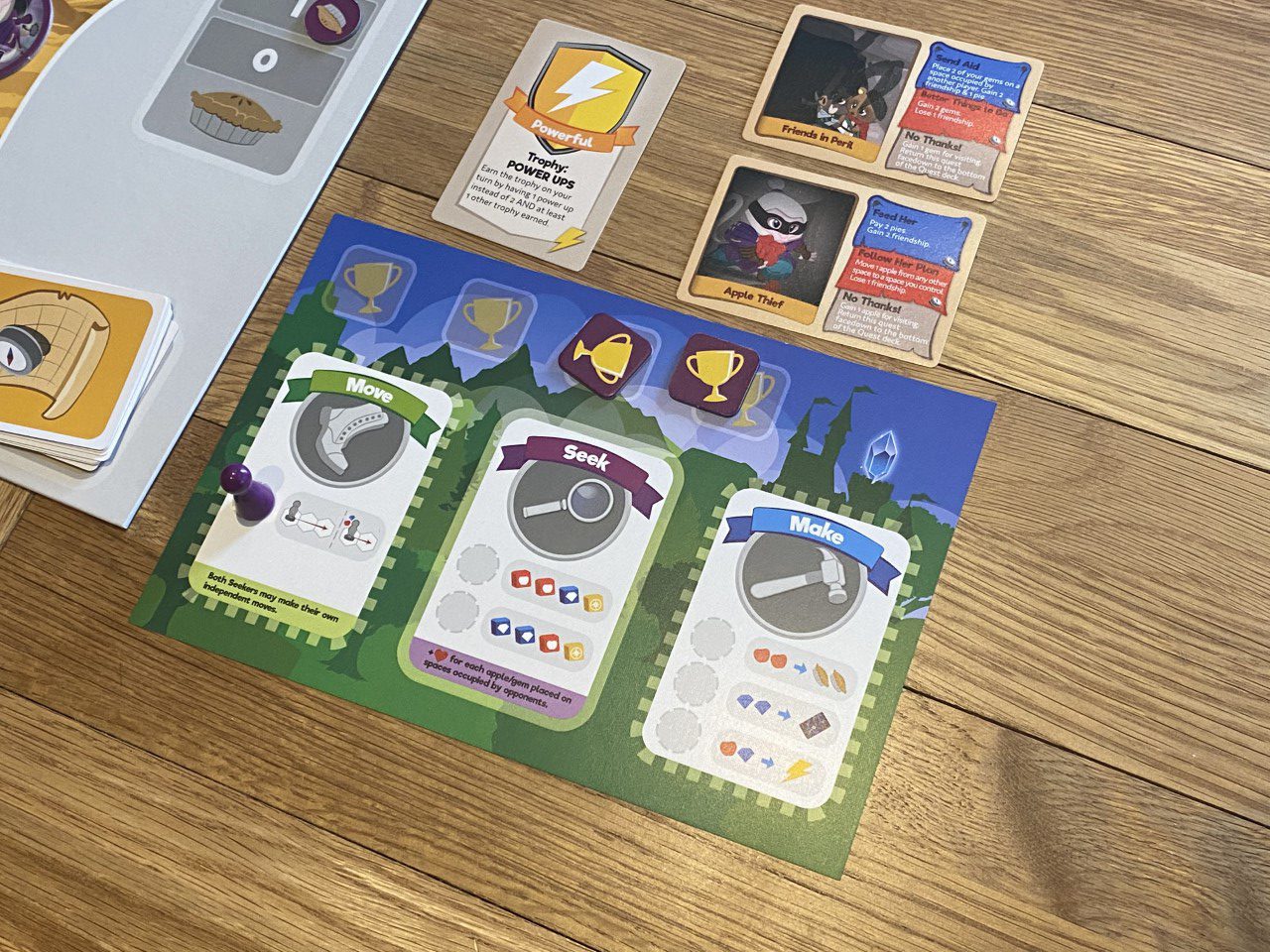 Move simply lets both of your models move — either two spaces if unencumbered, or one if you choose to bring any number of the apple or diamond resources in the same space with you. Searching is equally simple, with the player rolling dice based on whether they want to focus on apples or diamonds, and then adding the resources rolled to the spaces shown by colour on the die face (a red apple face means the player can place an apple token on any red space).

The make action simply allows the player to trade resources for pies (which are the resource used to mark strength) or to upgrade their Move or Make action to make it stronger. This is the one action my kids struggled with, but as I said earlier, they are both quite a bit below the recommended age. The only rules or variations around action selection are that the same action can’t be taken twice in a row, and that different rows within each action mean that things can be paid for in different ways — a single older player can easily guide young ones through this. 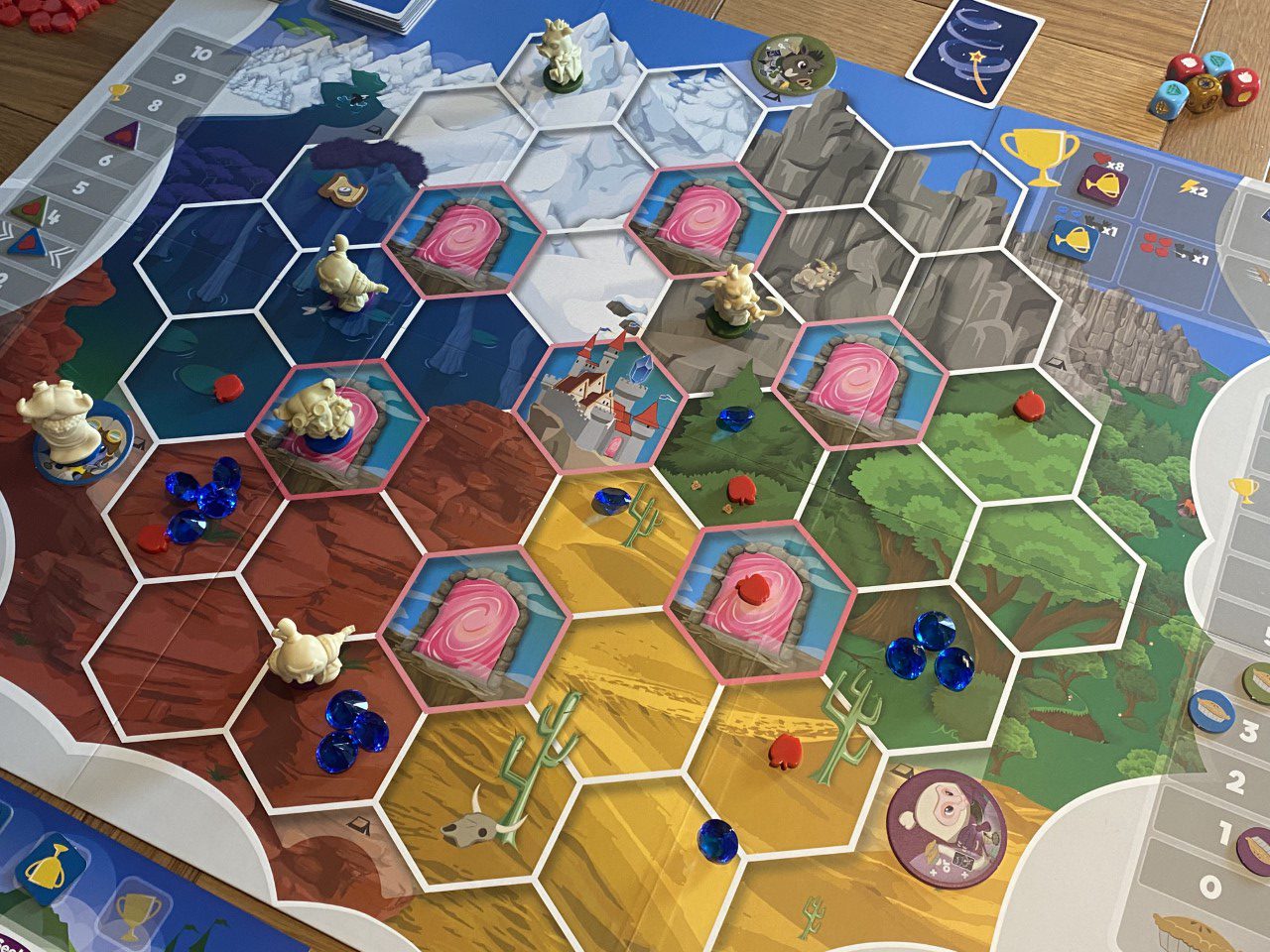 There are a few other concessions to younger players that I must say, I really like. For example, if a fight starts (by one player entering a space occupied by another) then a pie fight will happen. In this case the attacking player will lose one friendship — this is a fantastic message for kids, although my youngest child did win one game because the older child refused to make an attack that she needed to. I’d call that a moral victory in the literal sense.

Characters who lose pie fights, or who successfully deliver goods to the central palace are returned to their base camp, but rather than this being a “punishment” as it is in more complex games, it actually refreshes the player in My Little Scythe. Being refreshed allows a player to choose one of several benefits such as drawing a spell card (a powerful buff for the next pie fight). 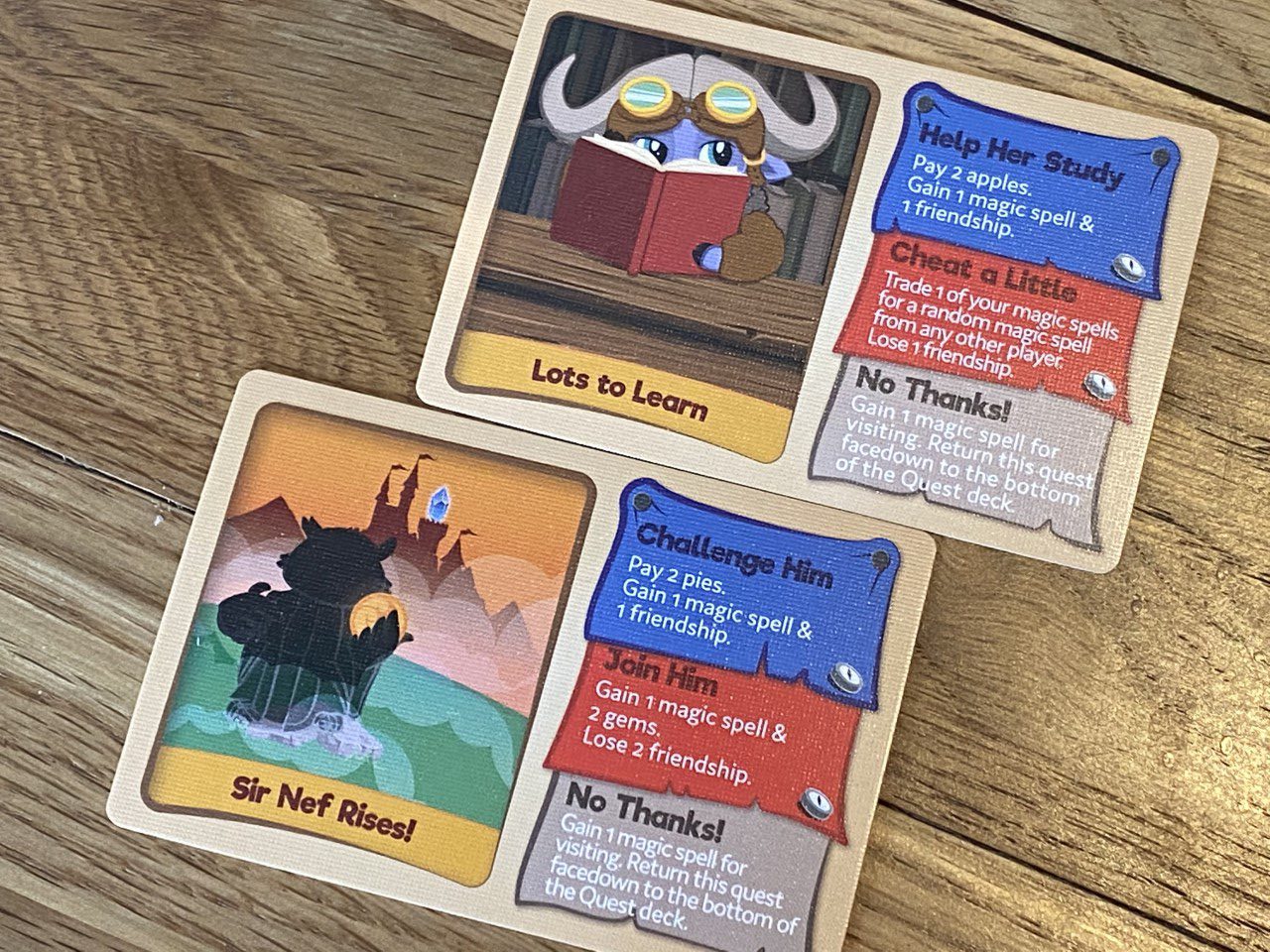 Overall, I’m not falling over myself to play My Little Scythe with any audience besides my children, and I’d never choose it over a more mature game as a preference. With that said though, I’d play it with my children any time over most of the other younger games we have, and I hope their enthusiasm for it remains as high as it has been. Yes, this is a kids game, but it’s as heavy as kids games get (in terms of decisions) but with none of the mechanical baggage or “meanness” that might spoil it for youngers. My Little Scythe is a great addition to any young gamers shelf.

You can find My Little Scythe on Amazon.