Muffin Time is a barrel of laughs

Muffin Time is a wacky two to four player card game where everyone is just trying to get ten cards and keep them. This sounds like a really simple task, but the cards themselves are super silly and you’ll want to play them for the chance to get more cards.The game itself can be as short as 30 minutes or as long as an hour and a half, depending on how lucky you all get. That said, there are cards which can end the game instantly too. It’s rated for ages 12 and up.

Muffin Time starts each player off with three random cards in their hand. These cards fall under various categories like Trap, Action, Counter. On your turn, you can set down a single trap, then you can draw a card or play a card. Trap cards are laid face down in front of you (unless they say otherwise) and stay for the duration of the game until their trap is triggered, they are discarded, or they are replaced. 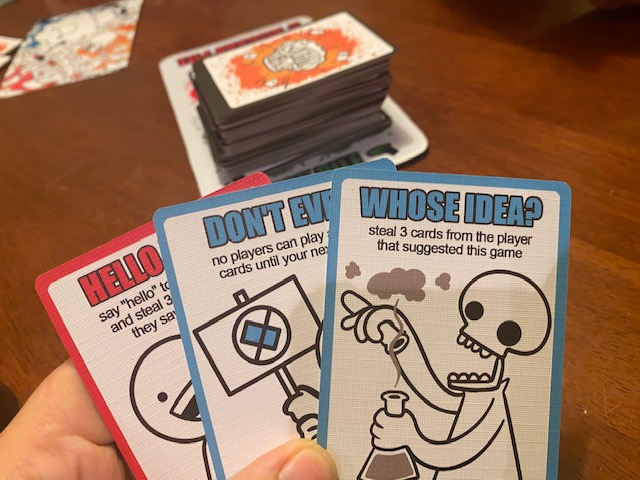 These trap cards are hilarious! Some of the ones I got involved trying to get someone to say “what” to me and having someone say the word “please”. Claire got a card that was activated if anyone went on the internet on their phone, while Matt got a card that needed to be stuck to his forehead and if anyone commented on it, it would go in the bin. Otherwise, everyone got cards when it came back to his turn.

These trap cards are where the real fun in the game came for me, it’s a big curiosity that needs to be followed!

Action cards are the next type of cards. These are often cards that allow you to steal cards from players, force them to discard, or more. These are rarely directed at a specific player, but instead at whoever’s birthday was nearest, or, the person that suggested the game, or people who wore glasses, etc. It all depends on the card, but they were specifically made in a way that catered for both larger and smalller playgroups.. Some action cards, rather than having directions on them, are instead challenges, where people need to stand up fast, hold their breath the longest or participate in arm wrestling, for example. 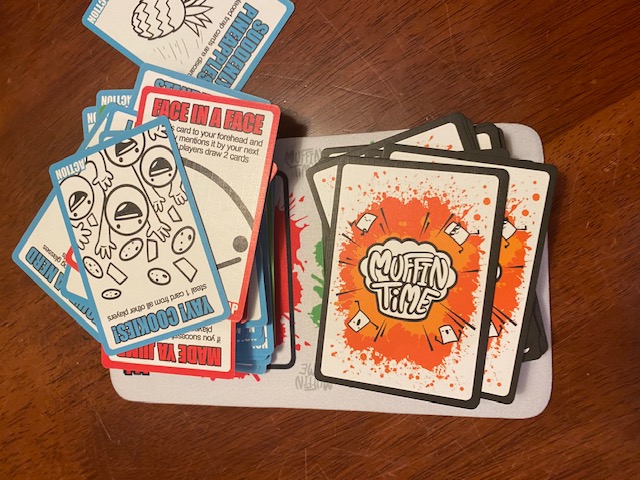 Counter cards are the third type of card and, as you may guess, are used to counter attacks — but also come in a large variety of counters. Some reverse the cards onto whoever played them, others cancel the action just for you while some cancel the action for everyone.

Once one player has all ten cards, and not a card more, they must say Muffin Time. When the round then gets to their turn (as this often happens on their turn) if they still have ten cards, they win the game. This gives other players some time to mess with them and make sure they don’t win. 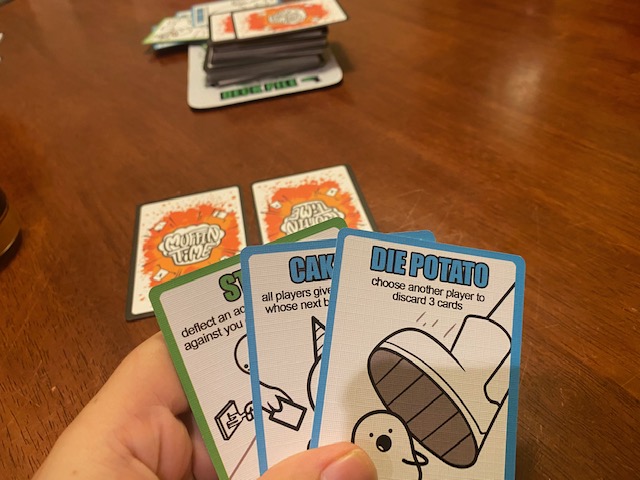 Muffin Time is a simple and fun game. The variety of cards is plentyful, and some cards (like the one that you put on your head) have different results for the same action to keep everyone guessing. I feel this is a great game to play with teenagers, who can easily understand the cards and have a good time laughing at each other, or with adults as a slightly tipsy game to play. The game itself also has a few expansion packs, if the cards ever do get stale, which can help breathe life into the game again. I quite enjoyed my time with Muffin Time, and found myself laughing a lot along the way.

You can pick up Muffin Time on Big Potato Games, though it’s worth noting that the box in our pictures was a Kickstarter Exclusive.

P For Pizza is a quick and easy word game

Top of the Pops The Party Game — Top pick for pop pickers!

Blockbuster Board Game puts your movie knowledge to the test.