New World — Not quite new enough

I’m the first to admit that I’ve sunk way too many hours into MMO’s such as World of Warcraft and Final Fantasy 14. Whether it was raids, dungeons, or crafting, I often spend the early hours of the morning justifying to myself why I needed to get just a little more exp. So when I was invited to take part in a preview of Amazon’s upcoming MMORPG New World you can imagine I jumped at the chance to try out what looked to be a different kind of MMO experience. But was it worth it?

When I first heard about Amazon’s open-world sandbox-style MMO, with a tough PVP centric design philosophy, I was practically giddy with excitement. The idea of an MMO like New World that challenged players more consistently in both its gameplay and progression sounded like such a bold and new idea, and after the rather lacklustre launch and reception of Crucible, Amazon would use a win. But after what I played, I’m now a bit more cautious than excited.

Generally speaking, I enjoyed a decent part of what I played. A lot of the more traditional elements of MMO’s are here like coloured loot systems, levelling, skills and attribute points, and the world is certainly visually interesting, with lush areas that certainly made the exploration more enjoyable. But after shrinking in a rather large amount of time, I felt a little let down by what I’d seen. Sure, all these elements were there, but I was still missing out on the game’s bigger picture, not to mention the most important and exciting parts of the game, the PVP.

It’s no secret that New World started out sounding like a much tougher experience, looking to be a more brutal and frankly unforgiving game from what I’ve read and seen thanks to always-on, full loot PVP. Having somewhat U-turned on the tougher aspects of this however, New World now puts the focus on its faction for its PVP offerings. These three factions are essentially the backbone of how PVP works now. After playing for a while you’ll get the chance to pick one faction that you are locked into, with any PVP action you do benefits both you and your faction in that territory. 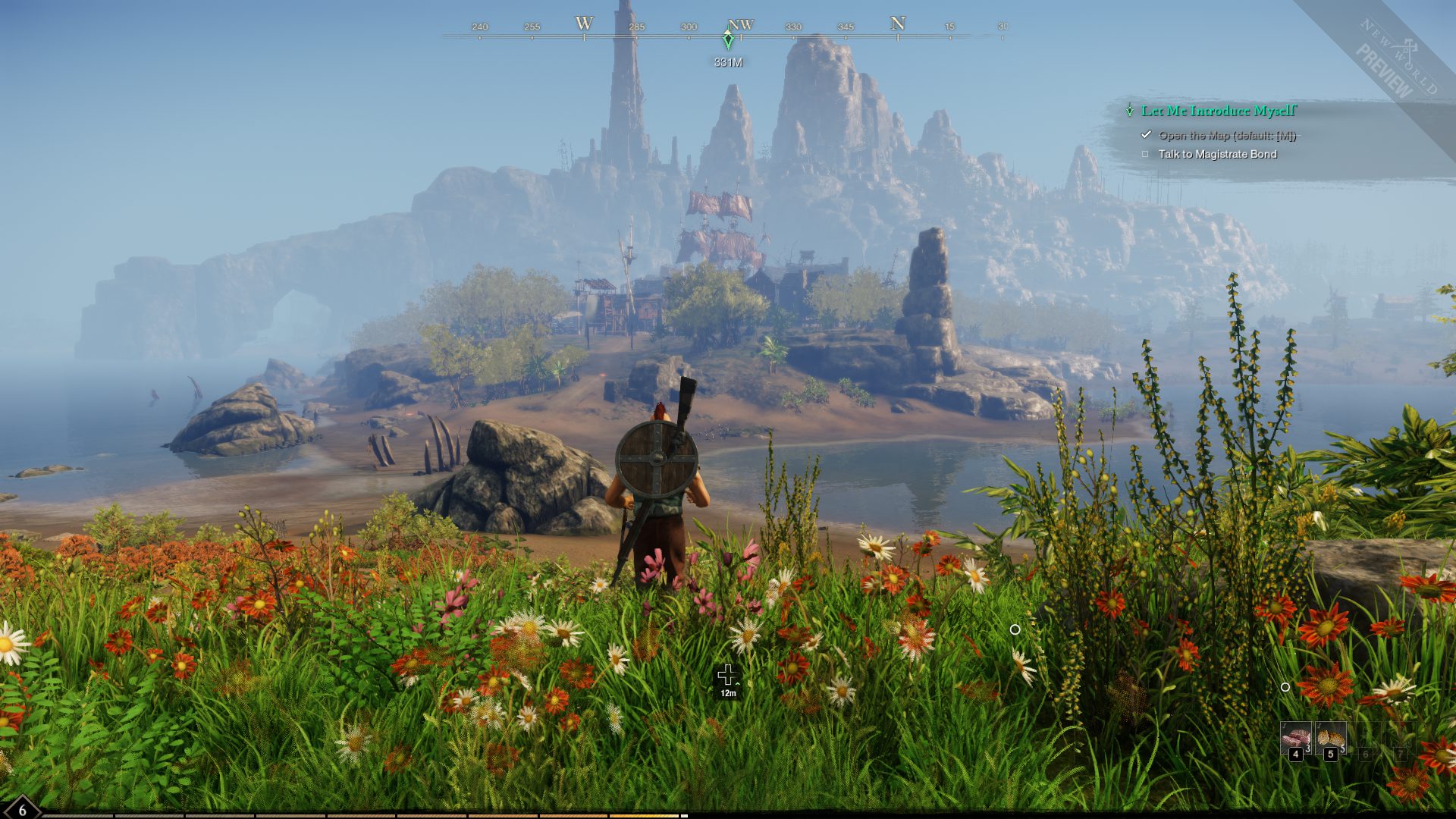 But the real work starts after you weaken an enemy’s hold on the masses of land known as territories and take part in a large scale, 50v50 battles. These are arguably the most interesting and well thought out part of the entire game, at least for me. These wars pit two factions against one another if the ruling faction lets it become vulnerable, leaving them open to attack and possibly losing their hold on the territory. Now that all sounded pretty cool to me, a constant struggle back and forth for power, taking on faction quests and working with your faction and companies to reign victorious was what sold me on the experience.

So, imagine my frustration and disappointment to find that all this great content was particularly out of reach for most of my time playing. Where I wanted to get to some meaty, PVP based action as quick as I could, I actually spent most of my time having to deal with some of the very boring, checklist quests that, quite frankly, sap my will to live after a short while; making me repeatedly visit the same areas over and over again, killing the same kind of enemies over and over again. It’s made a bit more disheartening that even the faction quests suffered from this as well, and while I can understand having a few of these scattered around in an MMO is pretty standard it’s still a bit of a downer that most of my time was spent with this style of quest rather than some more dynamic, varied quests.

Thankfully, the gameplay did make for this somewhat. Having you fight in real-time, dodging, blocking and managing stamina was a nice way to keep combat and these repetitive quests a bit more bearable and interesting, especially when compared to some of the more static, button spamming encounters I’m used to from MMO’s — having a few different choices of weapons with multiple slots was a nice change too, letting you swap and mix up combat on the fly. With each of the available weapons for this preview playing differently enough to keep things fresh, and each having their own respective — albeit short — skill tree, to give a little more depth; even if you can only have three abilities equipped at a time.

On top of that, the survival elements blended rather nicely with the overall gameplay, with most of what you find in the game world being used to craft a variety of weapons, equipment, and food. Though it should be said a rather large amount of my time was spent with this part of the game; Especially given that all the different aspects of crafting and gathering have their own level, meaning a big chunk of time playing will likely be spent levelling up these skills, so if you’re into survival, New World certainly has you covered there. 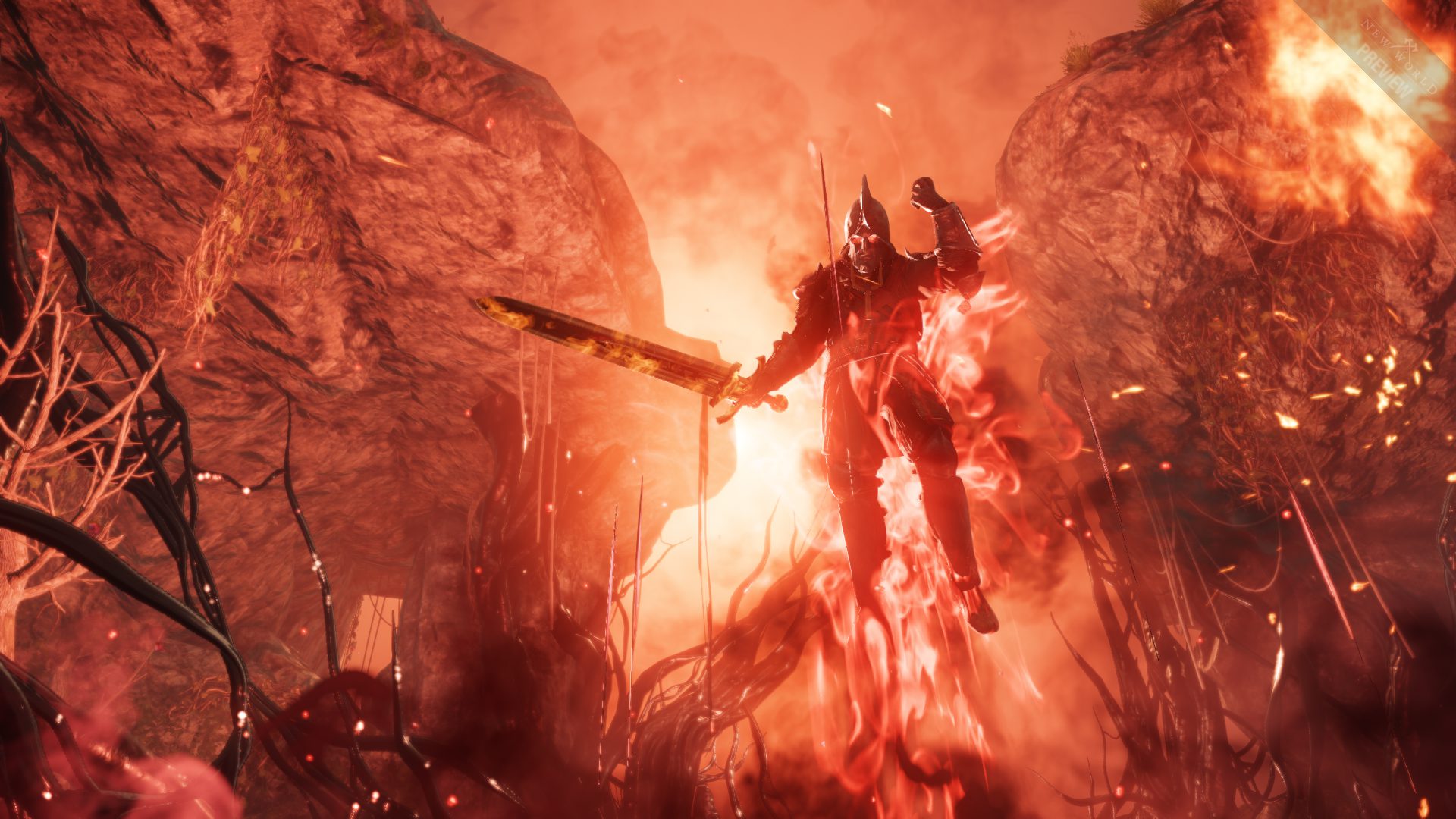 So I think it’s kind of clear that I’ve mixed feelings about my time with New World. On the one hand, the game offers up a really unique and focussed PVP experience that easily could stand toe to toe with the heavy hitters in the genre. But at the same time, so much of what surrounds it started to frustrate me and I didn’t even get to really dive into the PVP until my time with the game had ended. This is made a bit more concerning when you consider the games had now been delayed twice with it supposedly releasing in spring 2021. I just hope that the full game puts its PVP front and centre earlier, and it’s quests and gameplay loops are a bit more varied compared to what I played in this preview.

Of course, this should all be taken with a grain of salt. This preview could be wildly different from the full game, and a lot of the issues or concerns I have could easily be addressed before its release.

I get the feeling this preview event was meant to whet my appetite and generate excitement for the full game to come. But for the moment, I’m left with a slightly sour taste that I hope won’t diminish what could be a great PVP game.

New World is currently set to release Spring 2021, you can check out the developer’s Website or Twitter for more details.

ZeptoLab Enter Publishing Scene, Promises No Submissions To Be Ignored