In all honesty, there are so many new board games coming out these days that it’s not often we get the chance to jump into an older game. Where Alien Frontiers is concerned though, I’m happy to make an exception, because you know I love a space theme. Here, we’ll be colonising a distant planet — though the gameplay is lighter and very different to the much newer Terraforming Mars.

Alien Frontiers is a 1950’s themed space exploration game that has each player controlling a group of explorers, all competing to score the most points out in the distant reaches of this space. Their goals will be achieved by rolling dice and using them in the various locations on the board, with more powerful dice combinations resulting in stronger effects. 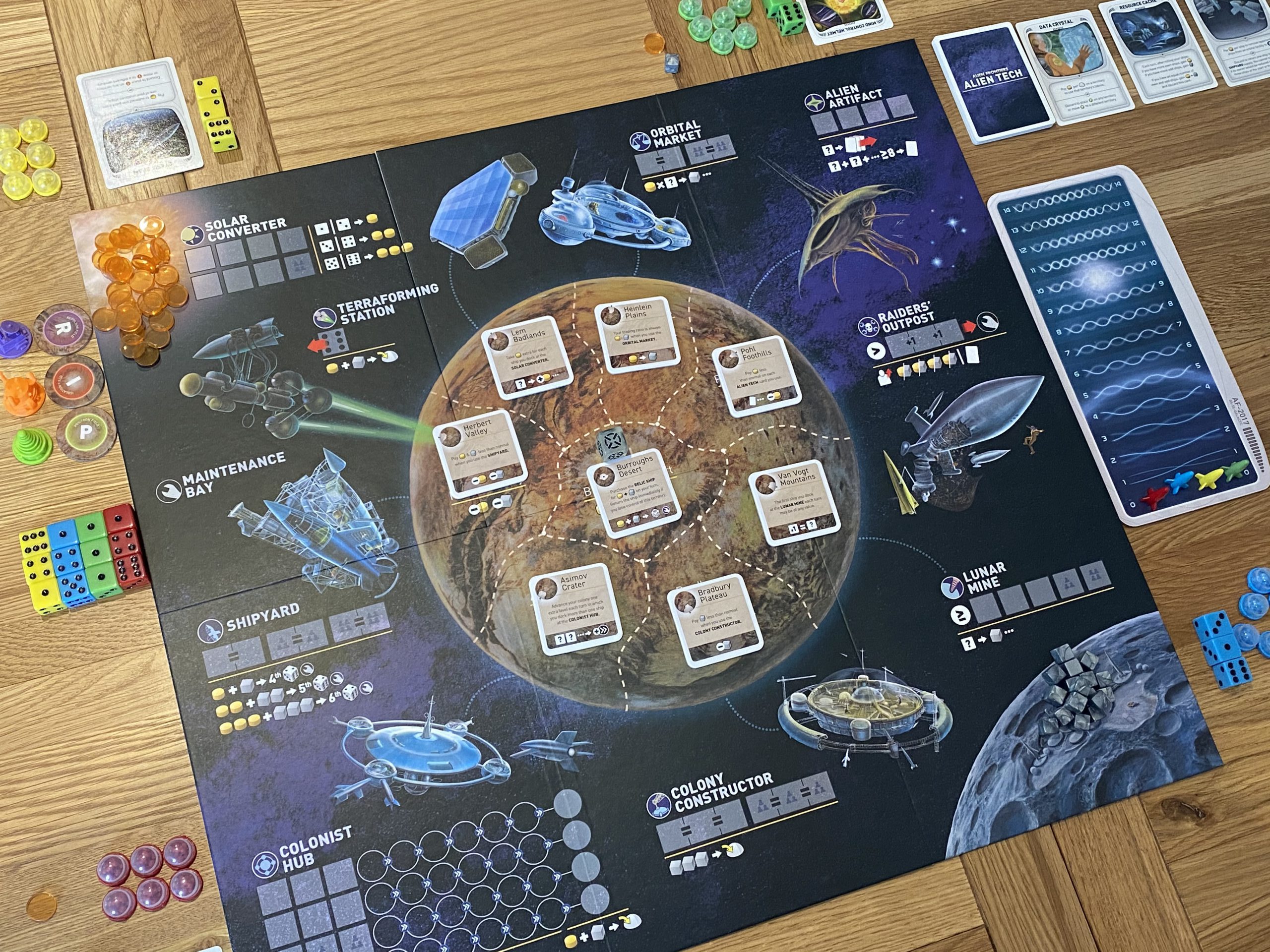 The components are very clear and easy on the eye, with the player components split into four distinct colours, and everyone receiving six dice and nine colony tokens of their chosen colour. The board itself uses artwork that resembles early Star Trek or Battlestar Galactica styles, with rockets and space stations that don’t look plausible by modern standards, but feel right at home here.

The players will always take three of their dice and put them onto the board in a set location, with one die each remaining off the board until later. The number of  colonies that each player receives then depends on the number of players, with the full quota used only in a two player game. Similarly, in two or three player games, the unused dice (belonging to the player or players not present) will be used to block certain board spaces. 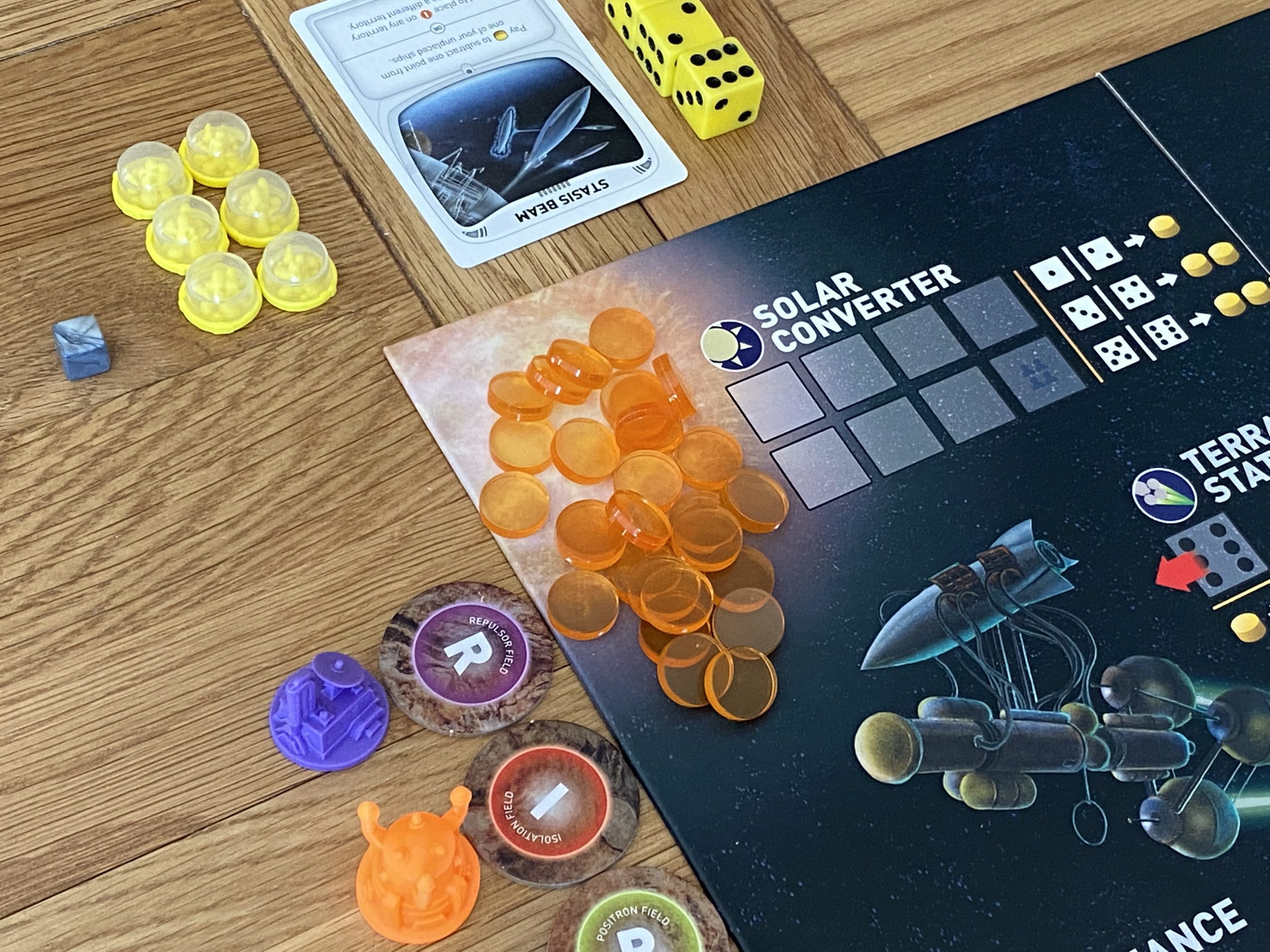 Aside from the board and the player components, the main elements that make up the game are probably the fuel and ore tokens, and then the alien tech cards — of which the players will each receive one at random. There are still, of course, a few other bits and pieces. There are bonus tokens for each of the board locations, there’s a separate scoreboard (onto which one spare colony token for each player will be placed) and a few other bits and bobs. A relic dice (clear) is also placed during setup.

The gameplay of Alien Frontiers is very straightforward, with each player beginning the game (as mentioned) with three dice which act as ships. Beginning with the first player, each player will first draw up their dice from the board (which doesn’t apply to turn one) and then roll them, before then placing them again onto the various locations on the board. 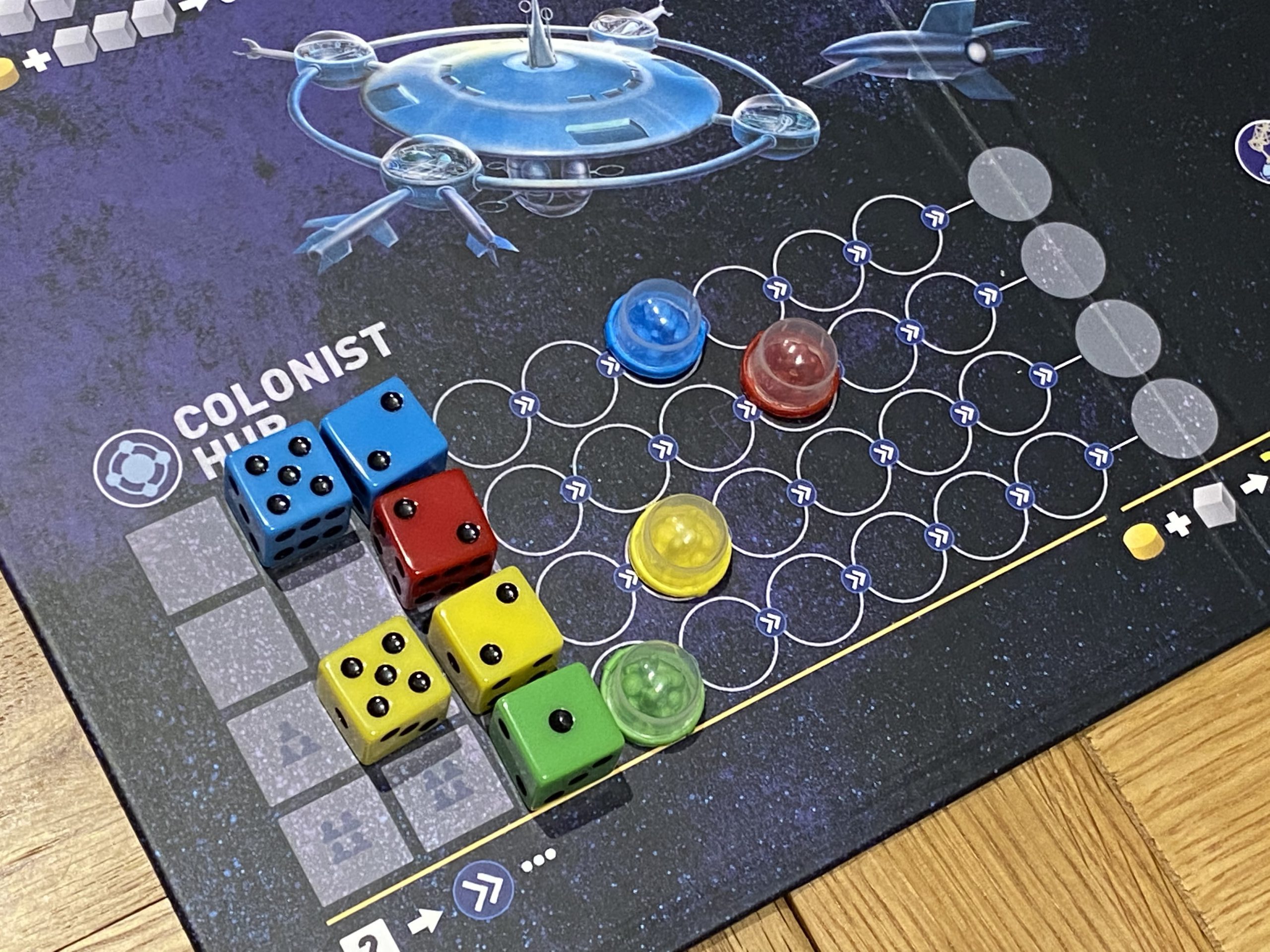 What makes Alien Frontiers a little different to most other dice or worker placement games is that the players don’t take turns to place one die at a time, and instead, the players place all their dice each turn. This also means that there are always dice on the board — from the other players — on every single turn, and there is never a reset or refresh phase that would clear the board.

This also means that several of the spaces require multiple dice to be placed, either with the same value or even a run of values. As usual with a dice game, this means that Alien Frontiers gameplay is somewhat luck dependent because you may simply never roll a run of three, or you might specifically want a six, but you never seem to roll one. Thankfully, the Alien Artifact cards and some of the regional bonuses on the board can allow dice rolls to be adjusted and mitigated, so let’s see how that works.

Firstly, let me mention the Alien Artifacts. First of all, remember that each player begins with one Artifact assigned to them, and this, to an extent, may help to set their strategy. Some cards offer the direct benefit of additional points as long as you hold them (tracked on the side board) whilst others offer the opportunity to exchange solar energy or ore for an effect — like increasing or reducing a single die face.

Some of the Alien Artifacts allow some actions to be taken for a lower cost — with the main ones being the three ways in which colonies can be constructed. Colonies are the main focus of the game, and each one you land on the planet will not only exert control onto the region in which it lands (creating an area control minigame) but also score one point.

Colonies are built either by advancing them along a track on the bottom left of the board (slow but cheap), by converting a ship into one (fairly expensive because it costs a dice/ship and resource) or by using the colony converter (expensive, and hard to roll as it requires three equal dice.) Any benefit you can get from an Alien Artifact or through control of a board region really helps towards colony construction, and the more bonuses and dice/ships you have, the faster your engine becomes.

This does lead to one of the interesting and I guess unfortunate things about Alien Frontiers, which is that it starts at a good pace, then accelerates towards the end and feels as though it wraps up too quickly. In short, with only six colonies to place per player (at four players), it can be possible for the colonies to fly out towards the last two or three turns, which occasionally results in players wondering how the game got away from them. 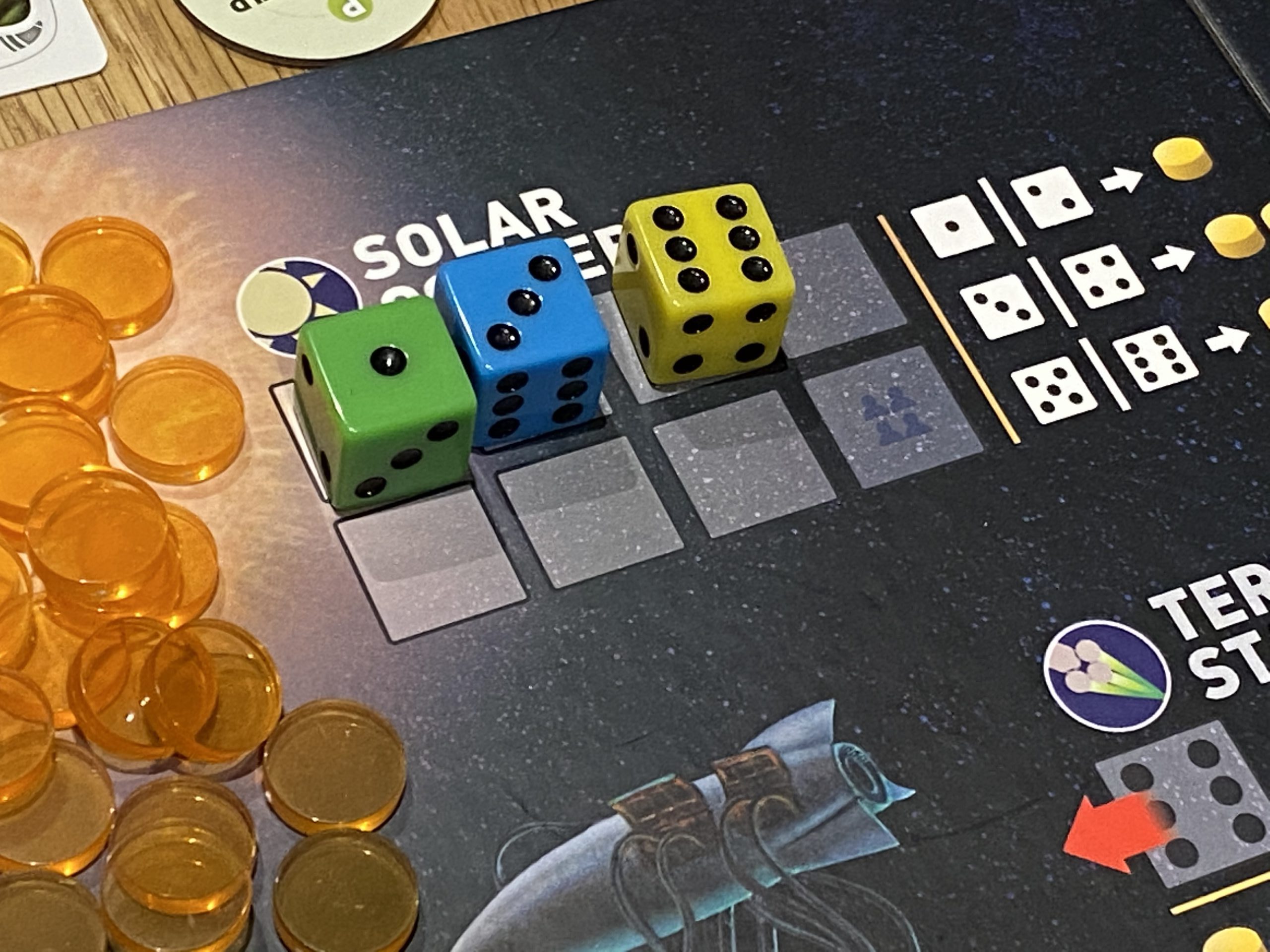 Even despite that minor blot on Alien Frontiers record, this is a really enjoyable game. The fast paced dice placement is very cool, and I really like that there’s no refresh phase. This means that the game never really feels as though it pauses — adding to the welcome sense of pace that precedes the less welcome speed with which things wrap up.

The Alien Artifact cards are fantastic, transforming what might otherwise be a relatively standard set of actions into a much more exciting mix of engine building and individual development that takes the vanilla “colours” that each player acts as, and transforms them into individual feeling teams. There are several expansions for Alien Frontiers that we haven’t played with, but one of them, Factions, appears to further enhance this and I can imagine how additional uniqueness here would be awesome.

I must also comment on the look of the artwork (which is that very classic sci-fi I mentioned above) and the exceptional components. The board and the cards really bring the sci-fi to life, whilst the dice are firm, large and made from quality components. The real standout piece, however, is the colony, which is a two-piece plastic component that essentially clips together to form a “domed city” in the colour of the player that controls it — these are really nice.

Overall then, Alien Frontiers is quite a unique dice rolling and placement game that offers fun, competitive gameplay that wraps up in around an hour per game. The best bits are the excellent components, straightforward gameplay and high level of constant engagement, whilst the small downsides are the reliance on dice-rolling luck and the fact that things wrap up a tad too quickly at the end. For me, it’s an interesting enough addition to the collection that I want to play it more, and if I can get my hands on the expansions, I will.