Energetic and frantic, Asobi.tech’s debut release, MaoMao Castle, is not-only a crowd pleaser, but an addictive, joyous foray into the journey of a flying Cat-Dragon as they race through obstacles to their floating castle home.

Hello all, Dann here — yes, I am directly addressing the audience, yes that is weird, but for now it’s very relevant. You see, I’ve been to a dozen-and-a-half events over the last year for the site; from Gamescom ’17 through Game Anglia, from Rapture through Games Forum. Now, there’s always a few things in common when it comes to industry events, you come to recognise the same faces on foot, on stands, and in the rest areas. The main thing which does change between the different events —and through the different classification of events (consumer, LAN, conference)— is normally the games. MaoMao Castle has been an exception this past year.

In fact, the fun little title and its developer —Asobi.tech— have not only been at almost every event I’ve attended, but they’ve easily been to fourfold the total I’ve attended in that time; with the event build, projector, and Leap Motion (the motion-detection bar, not the nascent headset) spending a remarkable amount of time on the road.

MaoMao Castle, then, is a third-person arcade shooter — similar to titles like Space Harrier, Panzer Dragoon, Star Fox, or Twisted Pixel’s The Gunstringer — in that the player character is always moving away from the screen, although that said, players do have control over positioning on screen and select abilities. In the case of MaoMao, unlike the examples I gave, there’re no shooting segments, with the game being a simple case of dodge or crash.

Split into twenty levels, and with promise of an endless mode in the final release, the game gives you nine lives as to try and dodge your way through everything the game can throw at you. Challenges like weaving through spiralling bamboo, sweeping through checkered-gates (Check Mate), or scraping a pebbled beach clear, make up part of the selection available. The entire gameplay follows a simple pattern of 1) not smashing into things, 2) getting low level points from clearing objects on the ground, 3) getting high points from collecting rainbows, and 4) hitting an action button (or, on Leap Motion, clenching your fist) to burst forward in a smashing charge. The joy comes from the wonderful retro design, the increasing pace, and the catchy music cheering you along.

While Quang, of Asobi.tech, and the Leap Motion are definitely a core part of the event vibe — I don’t think I’ll ever forget Quang’s enthusiastic repeating of the level’s goal as he bounces about in a cat costume, cheering along players old and young — the game carries over extremely well to desktop and mobile. In addition to the many goes which I’ve given the motion-tracked version, I’ve played a demo Windows build which is controlled by mouse and left-click. Movement in the PC version feels deft, and the reactions certainly feel sharper than that of the event build… although that may simply be down to the event control method being unconventional.

All of that said, it is the mobile audience which the game will be initially targeted at, and much like it’s desktop counterpart, the responsiveness feels great, and —obviously— the pixel visuals hold up just as well on a small screen as large. 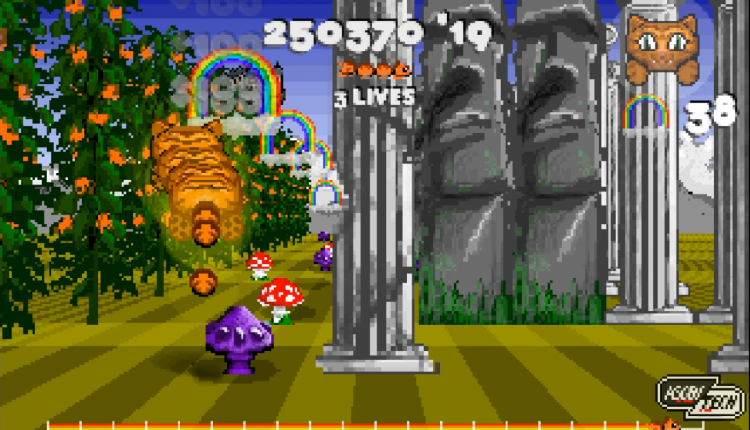 There’s reportedly a little bit of work left to be done on the game ahead of its release. With both boss battles for every tenth level, and a variety of cat skins — optional and cosmetic — to be added into the game. Otherwise, MaoMao Castle already feels polished and ready to go.

You can find out more about Asobi.tech and MaoMao Castle on the developer’s website, or by following the developer on Twitter.