Lucky Duck Games is rapidly becoming one of the most talked about board game publishers of the current gaming era. This is no small thanks to securing the rights to convert huge properties like Jetpack Joyride and Kingdom Rush into board games. Kingdom Rush: Rift in Time, which comes to retail in the next few weeks, achieved over 5000% of its Kickstarter goal — and we’ve got our hands on an early production copy.

Now, whilst Kingdom Rush: Rift in Time, does come in a huge box, only about two thirds of it is used, unless you choose to upgrade to the deluxe components (exclusively available via the Lucky Duck Games website). Even so, there’s a huge amount of content in the box, which was a huge surprise to me given that Lucky Duck is a company that so often does so much with so little.

Thanks to their use of augmented reality in games like Chronicles of Crime and Time of Legends: Destinies, and given the history of Kingdom Rush, I have to admit that I was expecting fewer physical pieces and more focus on app driven elements. As it stands, there is absolutely no digital element to Kingdom Rush: Rift in Time, despite the inclusion of a fully cooperative campaign that spans multiple missions. 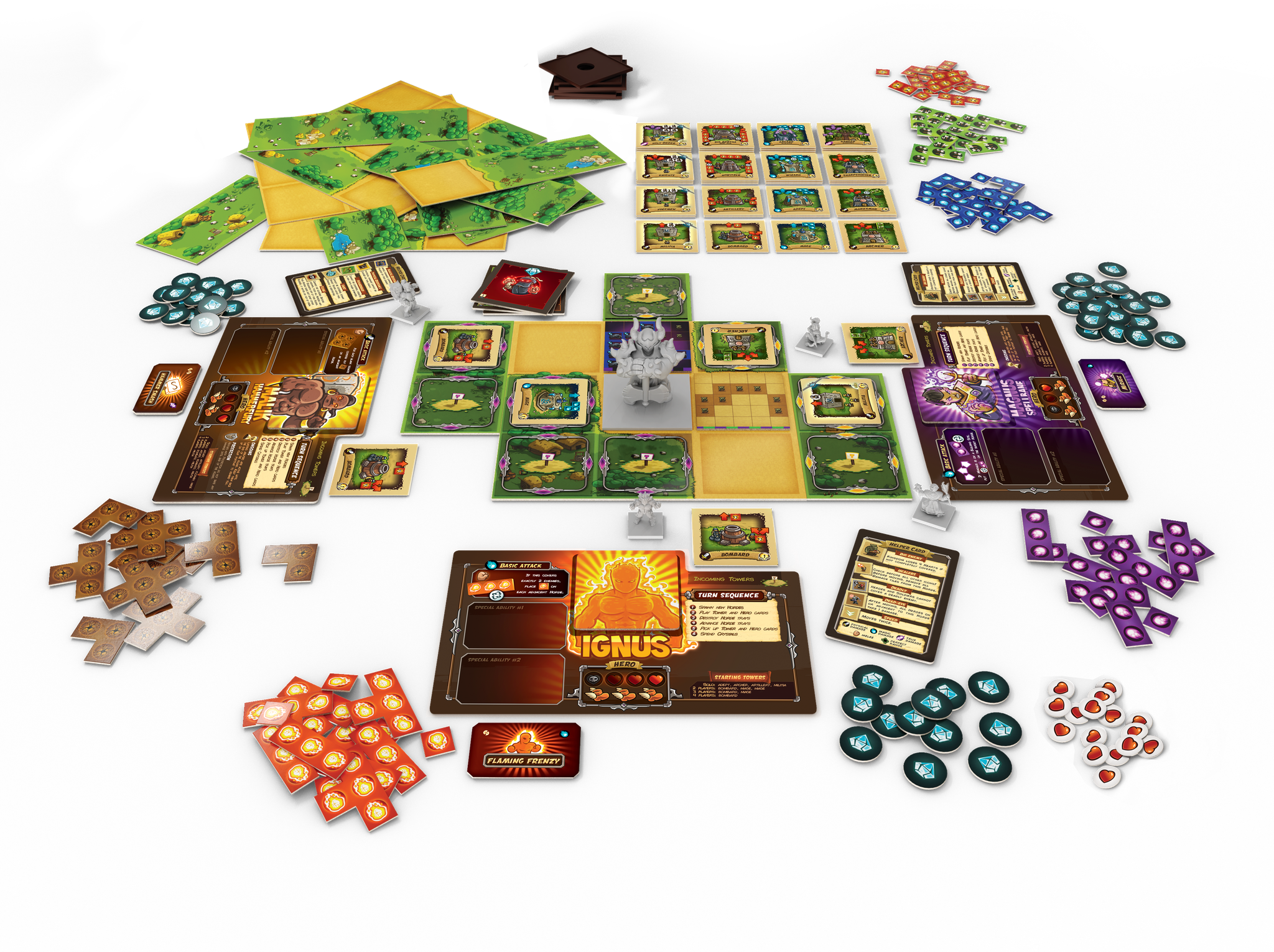 Instead, Kingdom Rush: Rift in Time is built on some very solid board game mechanics that bring the tower defense genre of Kingdom Rush to life without ever compromising on the quality of the turn-based experience. The boards are modular and change from one mission to the next, and the players choose from four characters who each feel very different, as they work their way through the campaign.

Getting into a bit more detail, Kingdom Rush: Rift in Time is actually a polyomino placement game in which the players use the powers of their characters, the characters themselves (represented by miniatures) and their towers to defeat horde boards. A horde board is only defeated once every enemy on it is “covered” and if left unchecked, horde boards will move towards the exit space, ultimately damaging the players and potentially defeating them.

Whilst this is, at its core, as straightforward as it sounds, Kingdom Rush: Rift in Time uses a number of mechanics to spice things up a bit. Firstly, towers of the four different kinds can only be placed in specific slots on the board, and each one lasts for just one turn before returning to the hand of whoever played it. 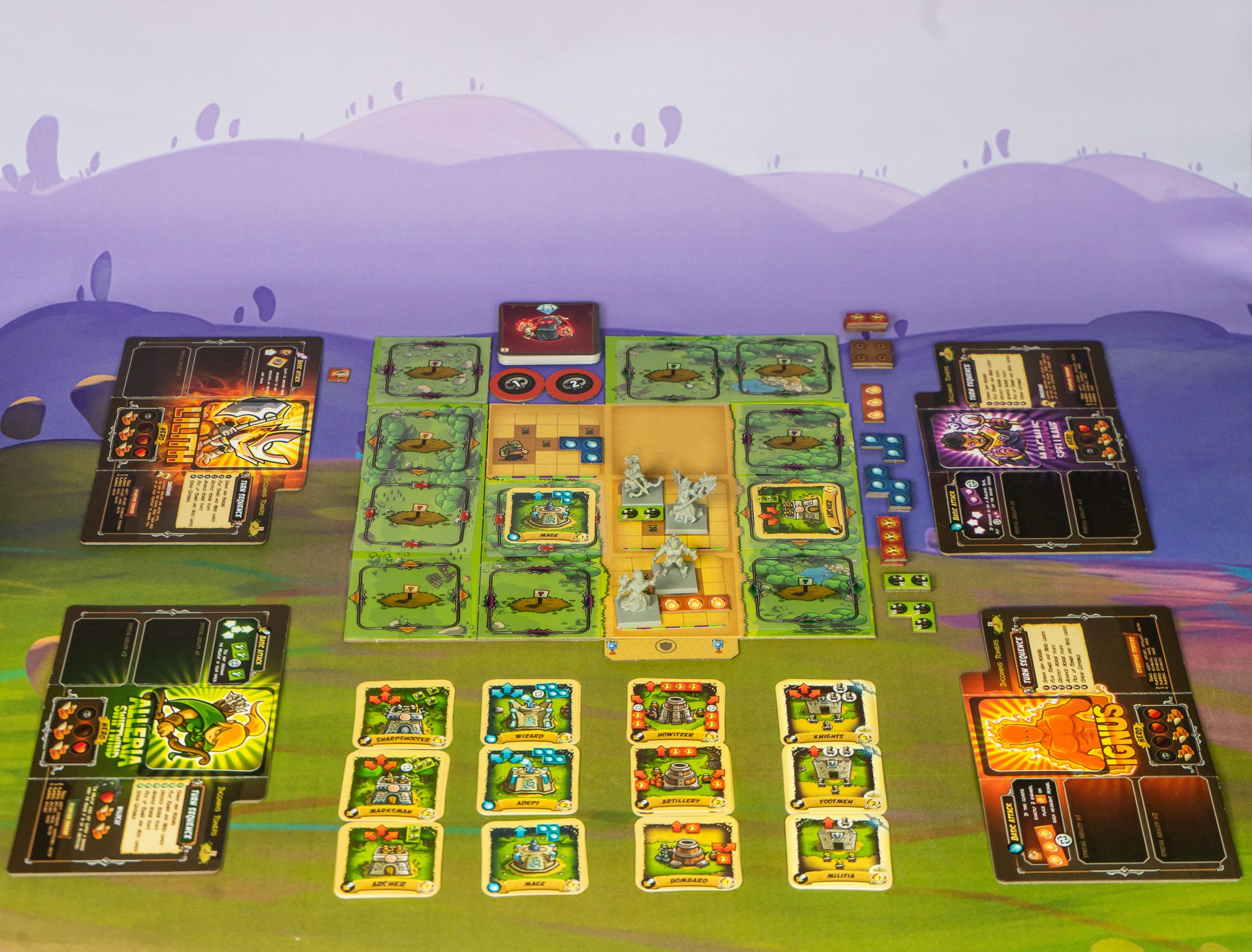 This, in truth, is probably because each tower attacks in a very specific pattern and at a set range, so on the turn you choose to place a tower it will likely be ideal, but on the following turn, it might not be. If towers remained in play permanently, then it would be possible for the players to create an unwinnable board state. Thematically though, the Kingdom Rush: Rift in Time lore states that this “removal” of towers is down to the antics of the Time Mage, so the game actually makes players think they are at a disadvantage as a result of losing towers, when actually, the game is helping them.

There are a few other clever features in Kingdom Rush: Rift in Time that remind us we’re dealing with a smart and experienced design and publishing team, rather than the kind of outfit that might grab an IP like Kingdom Rush and push out a substandard product just to earn a few quid. Towers can be upgraded between rounds by players passing their tower cards to their left hand neighbour, for example, encouraging and incentivising teamwork that actively prevents a single player from dominating the strategy of the round and repeating their plays.

I really like the way that towers become more powerful — both in terms of how it is achieved (by passing towers on and taking them out of the game for one round whilst the upgrade happens) and the benefits each upgrade offers. Whilst the default towers usually have limited range and shoot a polyomino in a fixed orientation, upgraded towers may address these issues by covering more spaces, allowing the player to fire in multiple directions, or adding range to the attack. 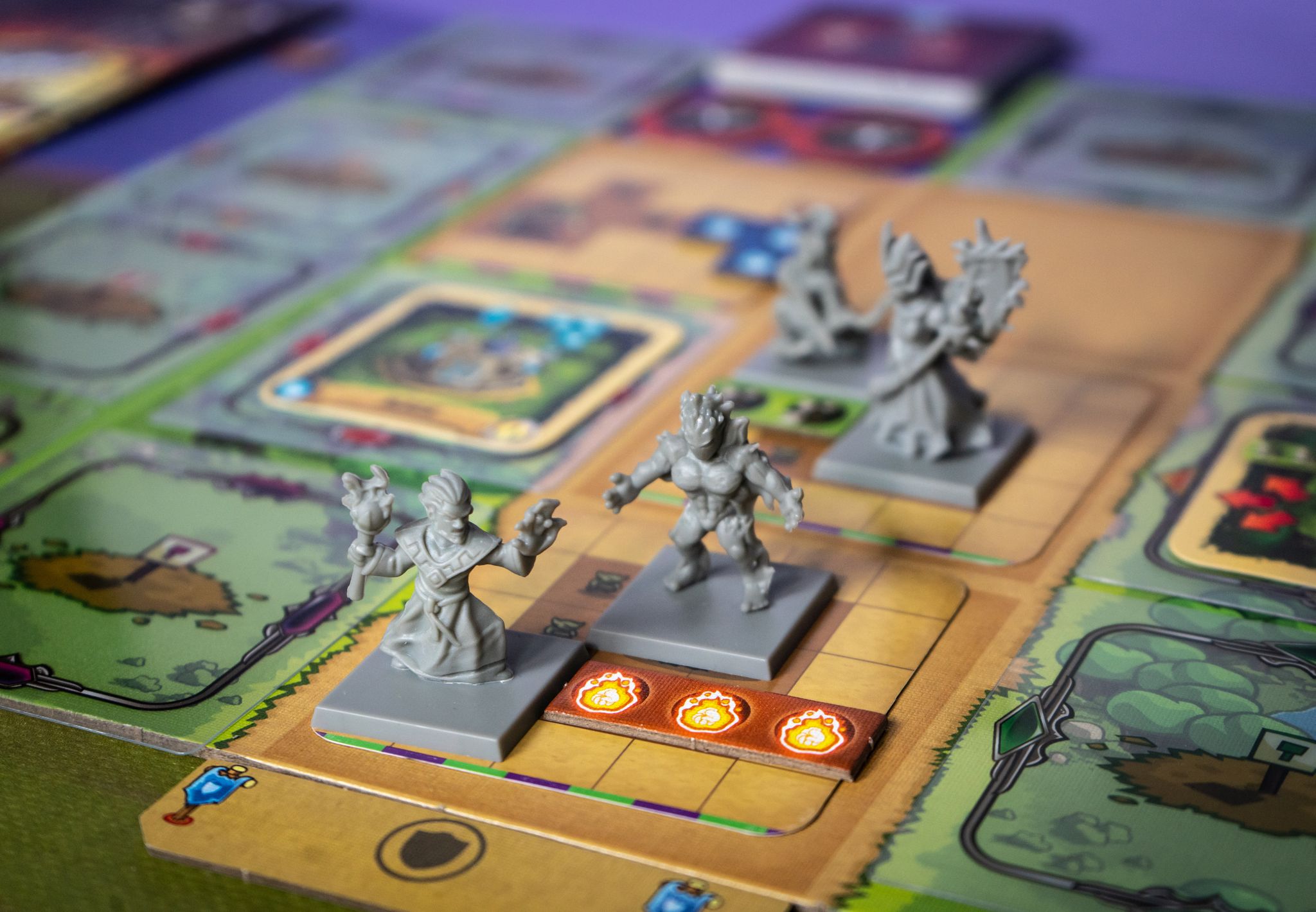 Similarly, the four characters in the base game (and no doubt any expansions that I haven’t seen yet) are well balanced, varied and customisable. The base game includes Ignus, Alleria, Magnus and Malik, each of whom come with their own strengths, weaknesses and upgrade path. Alleria, for example, has little health but can deal damage from range and has a summonable wildcat ally as an upgrade action. Malik, on the other hand, is built to engage in melee (which can damage him) whilst using abilities to devastate horde tiles in powerful ways.

The horde also has some tricks up its sleeve, including portal tiles which can defeat the players instantly upon exiting the board, and there are several different kinds of enemies among even the normal cards (let alone the bosses). These more powerful enemy variants come with tweaks to the standard ruleset, but offer greater rewards in gems when defeated. This, again, is a clever mechanism to incentivise the players to spot and understand enemy kinds that might be lost in the smallish card art, were it not for the way the game trains the players eye to the enhanced reward.

It goes without saying really, but everything in Kingdom Rush: Rift in Time is presented beautifully. This is not only a big box — it’s also a box full of fantastic goodies. These horde trays I keep mentioning; they are actually plastic trays into which a horde card is placed to enable easy movement on the board and to a certain extent to “trap” the polyomino tiles that players will place onto them in place. 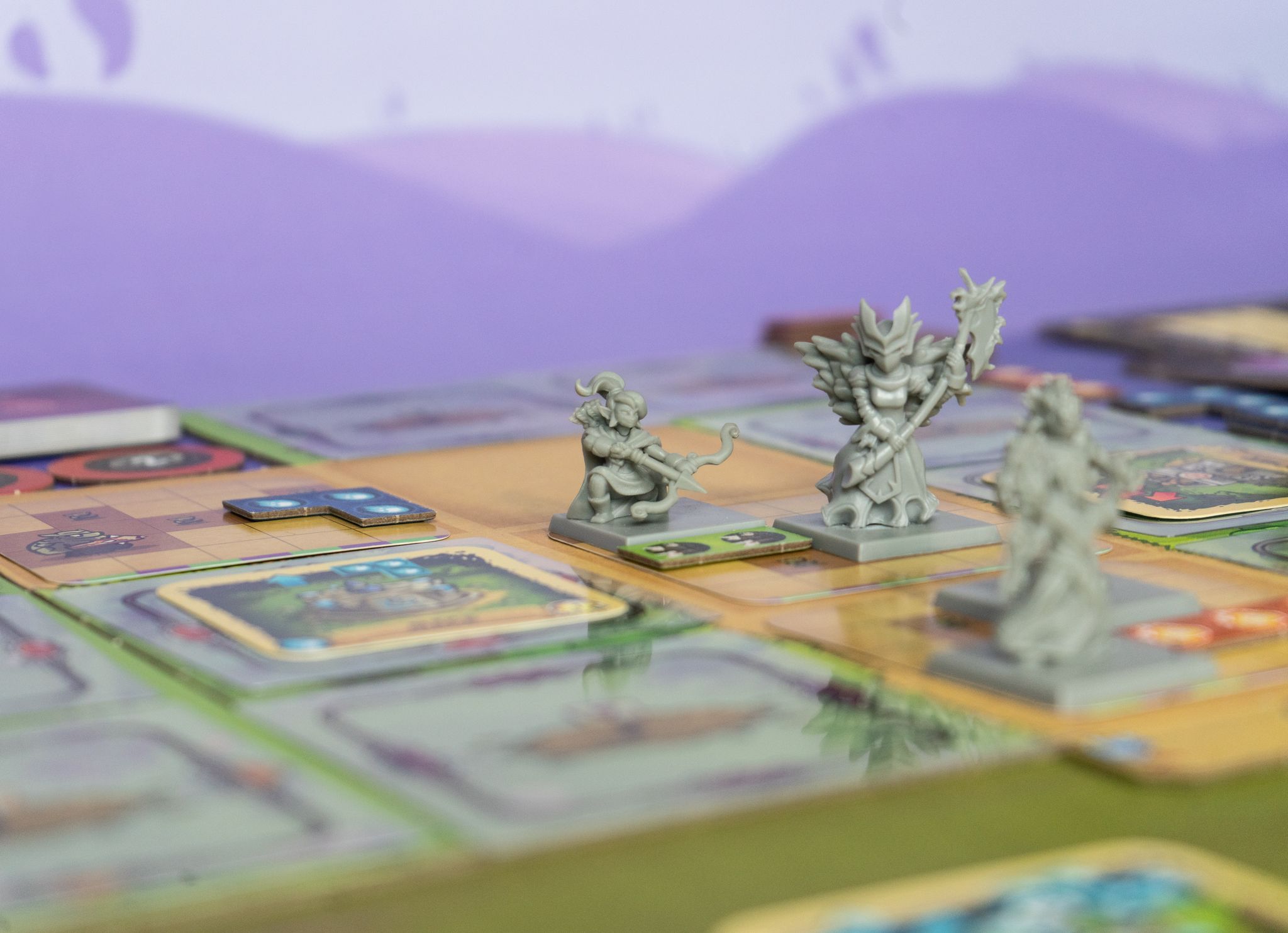 The modular boards are bright, colourful and thick, giving the game an eye-catching table presence that is really vibrant and exciting to players and onlookers alike. Equally, the card art on towers, horde cards and characters boards is excellent, with bold lines and clear features that mirror the original Kingdom Rush game as perfectly as you would expect. Miniatures are a good size, but most importantly, they too match the source material to a tee.

The instruction manual is clear and well laid out, and a separate campaign booklet details each of the ten scenarios that make up the campaign mode. Kingdom Rush: Rift in Time also includes both a solo variant, and a number of components and rules to create “random” games that increase the longevity of the game, essentially making it infinitely replayable – especially when factoring in the differences between the player characters.

When boiling it all down, I actually find myself with few complaints about Kingdom Rush: Rift in Time, but then again, nothing is perfect. So far, only two things to note spring to mind; the first being that the difficulty level ramps up quickly. The first few games felt a little simple, perhaps even easy, but things rapidly ramped up to become really quite difficult. We did lose some scenarios, and in particular, it felt like this was due to one or another (or sometimes all) player(s) throwing in the towel on a very tricky decision about where to use their actions to best effect. 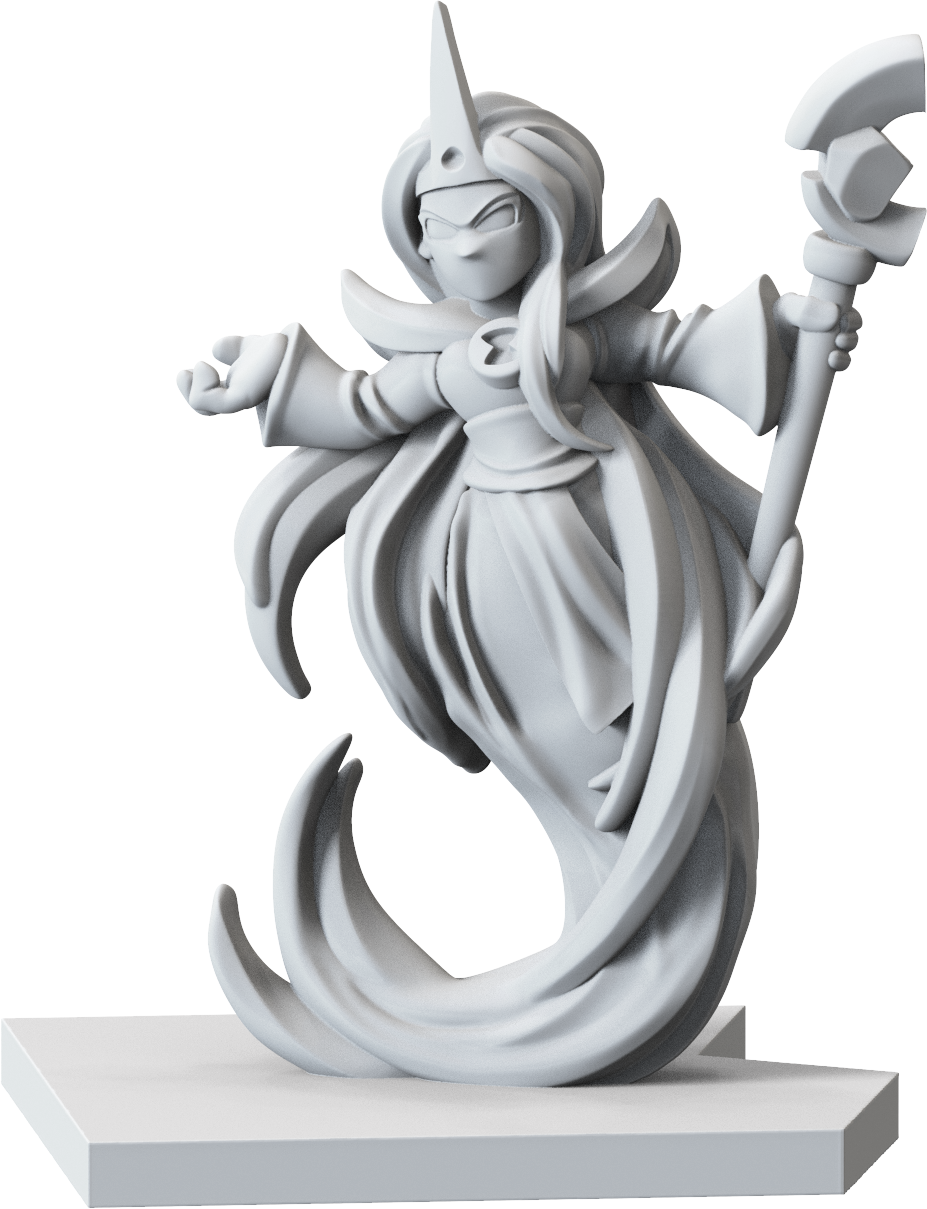 That said, we never felt like the game was overly punishing — just that the decision space became overwhelming. The only other criticism is a bit of an oddity, and that is that horde boards can be stalled by placing any character on them — either hero or minion. This effectively means that board won’t move on the next turn, but any horde board that does spawn will leap over it. It’s never a good thing to have a “more healthy” horde board jump a damaged one to begin its journey towards the exit, and this just didn’t make sense to me as a rule.

You’ll be glad to know that I have checked our interpretation of this rule and it is correct, but unusually for me, I don’t have a house rule in mind for how to correct it that wouldn’t lead to a load of unmanageable if and but scenarios. This may indeed be the same conclusion that the (much more experienced than me) designers came to, and hence we are where we are. Either way, this simply isn’t a major issue for me.

You can grab a copy of Kingdom Rush: Rift in Time from Lucky Duck Games.