The war has been won, but at what cost ? The first of the super soldiers is dispatched to destroy the beasts created to finish the conflict and who have now turned on their creators in Big Blue Bubble’s Action Platformer — Foregone.

The Arbiter; the aforementioned super soldier; is tasked by her commanders to infiltrate the territory of the remaining Harrow, beasts of war created to turn the tide of the conflict with a rival nation. Signs of that conflict exist everywhere you travel in Foregone, whether it’s the hulking war machines slowly rusting in the forest wilderness or through secret laboratories housing failed experiments which were planned to end the war. The Arbiter’s inner monologue and the notes she finds serve as context to events or locations and their overall contribution to progress the story.

Foregone’s narrative is played out as a 2D scrolling platformer interspersed with light RPG, MetroidVania and SoulsBorne mechanics. It’s quite fast paced and is graphically reminiscent of a less pixelated version of roguelike favourite Dead Cells. Rather than the higher difficulty and artifact/skill death reset mechanic found in rogue-like games, Foregone opts for continual checkpointed progress with a small contribution from Miziyaki’s Dark Souls series, a death marker holding your current cash and experience stock upon death. Akin to the Souls games it remains until you either reclaim it or die trying on which a new marker is placed with (likely) less of a haul of treasure.

Battling through the hordes of the Harrow can be a fast paced and frantic affair, as a super soldier however the Arbiter has several skills at her disposal including both melee and ranged attacks. Dispatching enemies rewards money, experience and more importantly a chance at dropping precious loot.

Loot is randomly generated across melee, ranged, armour, rings and emblems with each piece contributing to your Arbiter’s overall power rating. Foregone’s rare loot contributes to the power of your skills and weapons so it’s not only good to hunt down higher power and rarer examples but also pieces which compliment your preferred playstyle.

As a super soldier, the Arbiter is proficient in most forms of weaponry; luckily there’s plenty on offer in Foregone. Both melee and ranged variants attack differently with different attack timings and reach. A shotgun might pack a punch up close but it’s useless at range so a pistol or a pulse rifle would be better. The standout option however is the most utterly amazing combination of the Gunchucks, the dream of putting guns on nunchucks. Just think about it now …

As you adventure and gain enough experience, the Arbiter can be powered up through a base skill tree implementation. Each tree has two branches but only one may be taken and doing so permanently disables the alternative so reading ahead and planning your path is important to ensure you are not wasting your experience or the catalyst needed to unlock any given tree. Skills offer the basic health and damage upgrades but also offensive options such as a localized plague for damage over time, dropping explosive charges on enemies, casting haste on your character or other buffs.

Arbiter’s also have at their disposal a number of skills of which two may be equipped at any time. These range between both offensive, healing and defensive skills but can only be swapped out at certain machines or back at the outpost. Much like the Arbiter’s own base skill trees, skills have their own skill progression and further upgrades can be found for those diligent and patient enough to hunt them down.

Skills unlocked assist in returning to previous areas in a light metroidvania implementation but it’s not required for completion. Secrets are well hidden but the map also leaves something to be desired given it doesn’t show completion, secret areas or anything other than death markers or teleports so don’t rely on it for helping track down any hidden items. 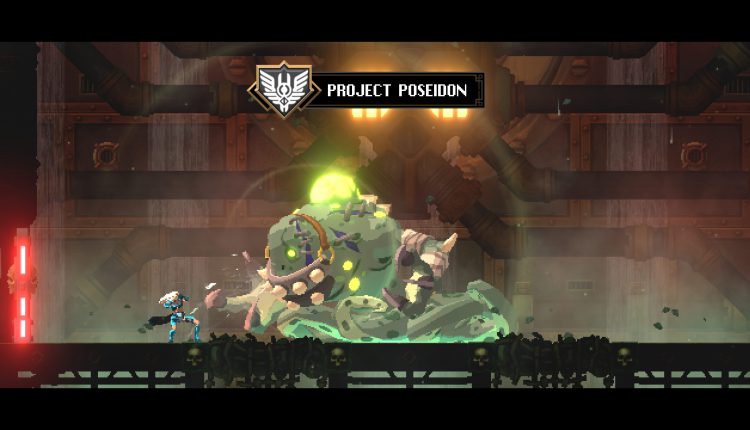 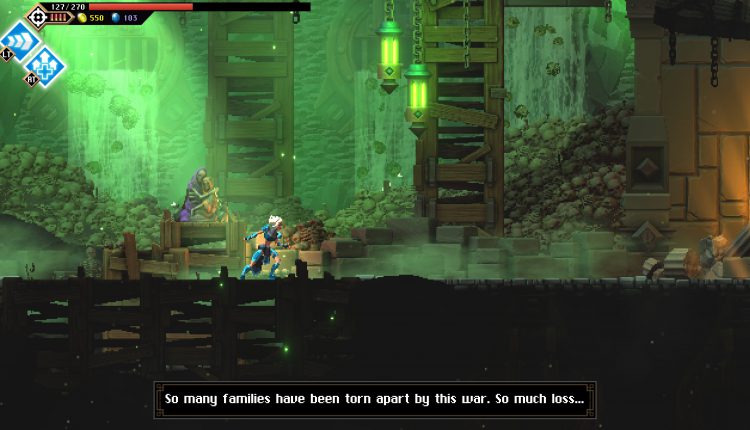 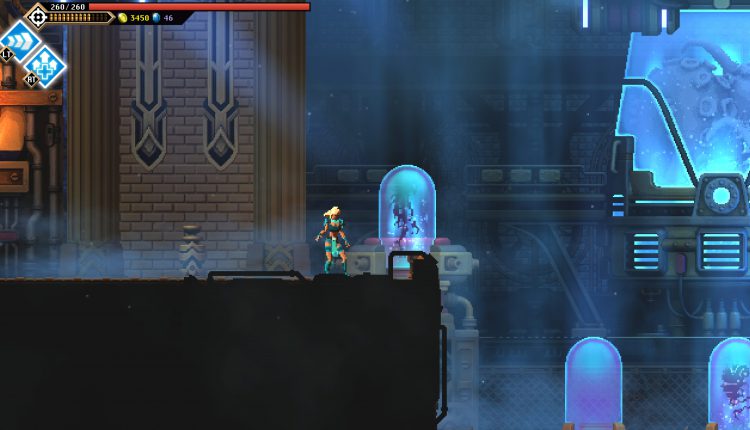 At the end of certain areas, the Arbiter faces one of the many beasts she has set out to destroy. These boss battles are fairly intense and are a great example of where everything comes together in Foregone. Not only do bosses evolve throughout the fight and gain more damaging moves or abilities the closer to death they are; but they hit hard and you can defeat any of them using any collection of weapons or abilities. Carefully recognizing each attack is important, most are telegraphed (even for a split second) so learning the patterns becomes essential for victory.

Fast and frantic, Foregone is a great example of 2D platforming done correctly with a smattering of interesting mechanics and a difficulty level that’s not hard enough to launch your pad but not easy enough to make the game unrewarding.

Foregone available now digitally on Xbox One, PS4 and PC.