Ikonei Island: An Earthlock Adventure is a cooperative adventure game all about exploring, crafting on and customising a beautiful island and returning it to splendour.

Do you ever rummage through your game library and stumble across a game that’s almost perfect for you, that you own but don’t seem to have even installed? For me, that’s 2018’s Earthlock. I appear to have totally missed it, even though the name is familiar and it’s just sitting there waiting to be installed. That’s a terrible shame because it was pitched as an ‘indie developed adventure RPG inspired by the classic 3D RPGs of the late 90’s’, which is a big string of words that really dance for me, and it looks like a fusion of Grandia and PS1-era Final Fantasy titles… But, we’re not here to discuss Earthlock, but instead a game set within the same universe, with a very different, but equally compelling, playstyle: Ikonei Island.

Where classic RPG tropes have you traipsing across continents trying to save the world from a big-bad villain; Ikonei Island has you peeling back the unknown and exploring a beautiful, lush island filled with mystery and encroaching danger. There’s definitely a little bit of adventure left in it, you’ll battle slimes and sneak around pirates, but there’s also a communal, almost slice-of-life co-operative element in there too. Something that’s incredibly exciting after a few years trapped inside, and with experiences like Animal Crossing: New Horizon starting to fade from the common consciousness.

Ikonei Island‘s demo, which I recently got to play at WASD 2022, started out feeling like a slightly more colourful take on the island survival genre. You start as one of a small selection (three at the moment, four in future) of characters and then start out on the sandy shores of a lush and expansive island. There’s a light tutorial, which revolves around collecting frogs and placing them on statues to trigger short guides. But, aside from the first couple of frogs, you really don’t need much guidance. It’s very much a case of running around, collecting items and shifting through your item toolbars to select items (like tools) when you need them. 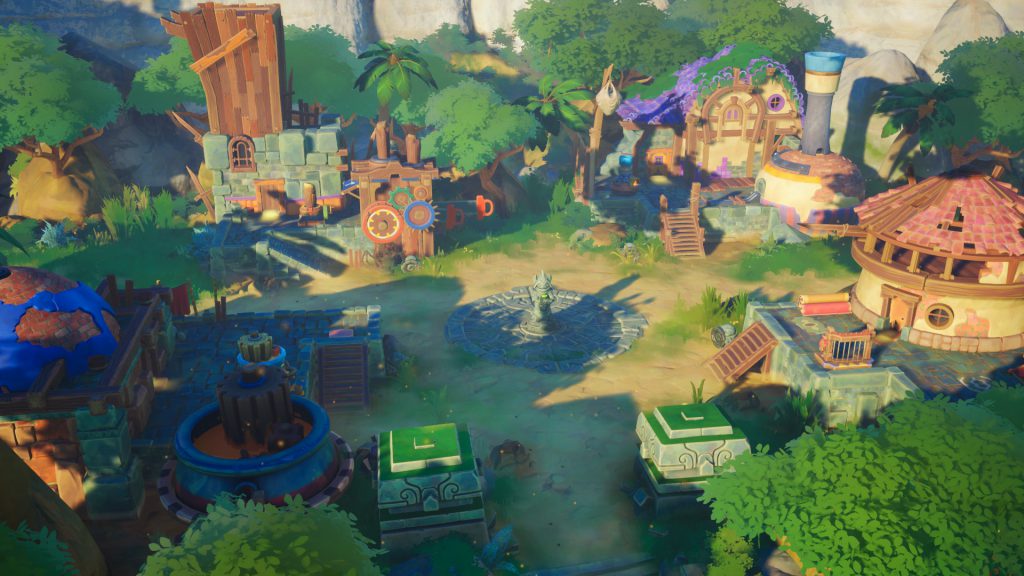 Shortly after starting, you’re introduced to the crafting menu and combat, bread and butter things which serve as glue between the real thing that interests me. Once you’ve reactivated a few areas of the map, the crafting suddenly goes from the modern multiplayer survival game into something closer to Terraria, Minecraft and the like — structural and decorative alongside the functional. At this point, it can all shift. Of your gang of four, some could just stay back, farm, refine and decorate while others go off and push back the darkness on the island and unlock more parts of Ikonei’s world.

After playing the demo, I chatted with some of the developers. The above simply scratched the surface of the Ikonei Island‘s planned scope, there’ll be NPCs beyond the little guide frogs, there are workshops for crafting and you’ll also be able to train some of the local wildlife as pets, some of which will allow you to explore the island in different ways. The island expands well beyond the verdant, beach-side greens too, there’re mountain peaks and deep jungles too, but we’ll have to wait a while before we see them.

Ikonei Island is currently in development for PC, there’s no release window at the moment.