Whilst I’ve previously gone on record to say that Through the Ages might be the ultimate civilization-building simulator, there’s no doubt that it does its thing in a fairly abstract way — as do other Civ builders such as Civilization: a New Dawn. Clash of Cultures Monumental Edition fills a rare niche in that it has both the off-board development of the Vlaada Chvátil classic, whilst simultaneously offering exploration, expansion and — of course — exploitation and extermination on a modular board.

Diving into Clash of Cultures Monumental Edition is no small task. This edition of the game contains both the base game and the only released expansion, and ingeniously the components are presented in such a way that the newer features are completely seamless. The exceptional player aids are double-sided and provide context for every action and phase of the game, as well as the cost and ability of each unit and building. On the one side is just the base game, and on the other, the base game and the extra content — all clearly explained. 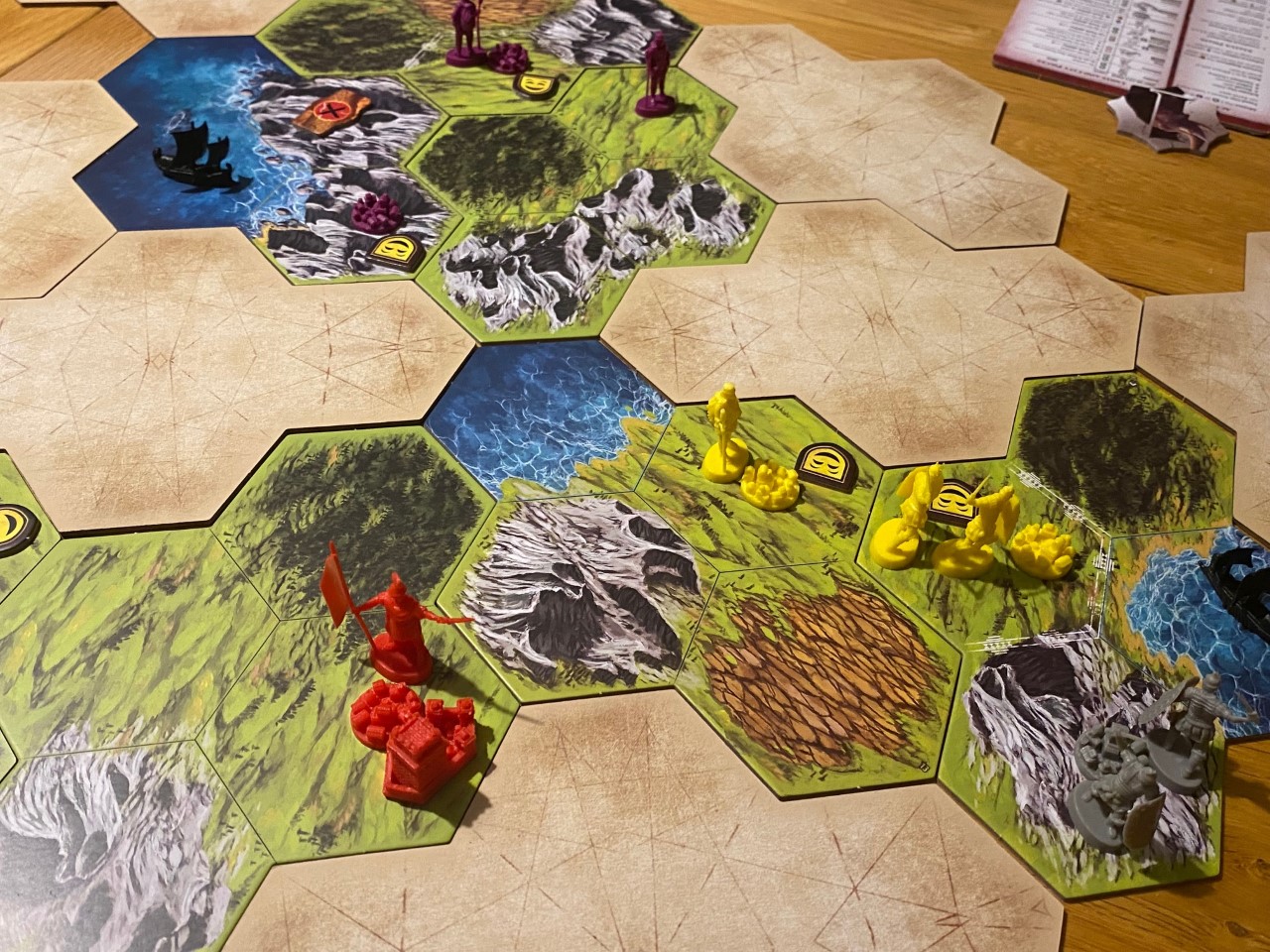 I can’t tell you how fantastic this is in the context of how complex Clash of Cultures Monumental Edition can feel when you are surveying the sheer number of elements, but if you keep on reading, then you might just get an idea.

Another thing that makes these player aids — and everything about how Clash of Cultures Monumental Edition is presented — is the fact that you’ll definitely want to use that expansion content, even in your first game. Basic Clash of Cultures has two to four players developing a generic civilization from its most basic discoveries (mining and farming) to the point where it will have expanded across the known world, building significant structures and wonders, explored the sea and even done battle with its neighbours, and that’s fine…

However, throw the expansion into the mix and you’ll find fifteen historic civilizations with deeply thematic advancements of their own, as well as the option to recruit leaders who create further individual opportunities. New units and buildings add additional options and variety, and the whole experience just feels more “complete” with the expansion content in play. 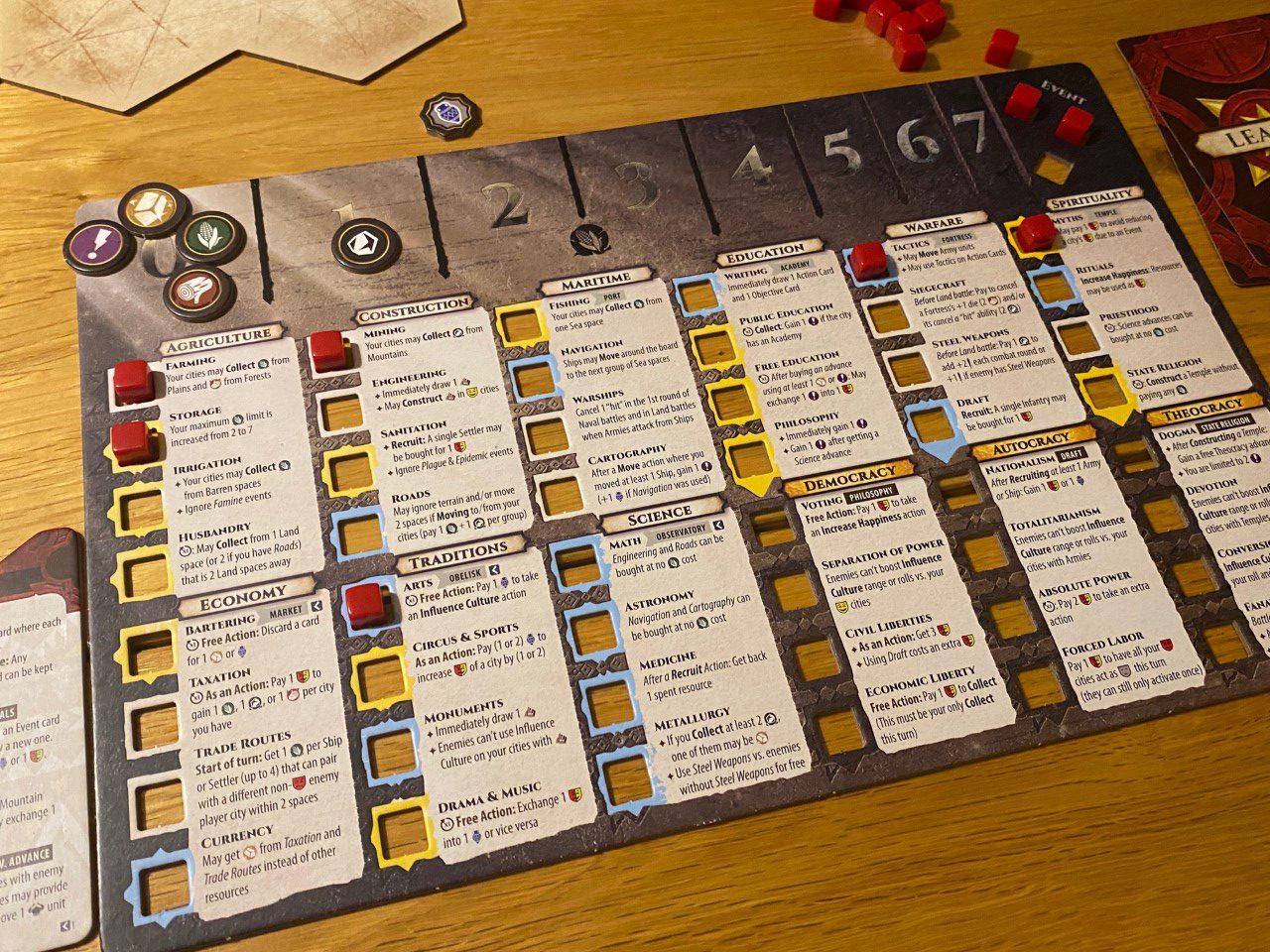 But how will you know if a game like Clash of Cultures Monumental Edition is really for you, especially considering the cost, rarity and time needed to really master it? Well, honestly, Clash of Cultures Monumental Edition is the de-facto board game version of Sid Meier’s classic Civilization video games, even though it has none of the licenses. It captures the feel of those games more accurately than any of the official tie-ins, and with that comes the overhead you would expect — mostly on your time, but at a lower level, on your willingness to learn, experiment and repeat.

Like Civilization VI, Clash of Cultures Monumental Edition rewards players who take the time to understand its systems and civilizations in detail. If you’re playing as the Vikings, you’re pushed towards naval raiding in the early game. The Aztecs? You’re going to need to be militaristic in order to use your powerful human sacrifice abilities. Babylon? Let your focus on science and culture carry you towards glory.

What powers a lot of Clash of Cultures Monumental Edition is the Advances board that sits in front of each player. This daunting piece of slotted cardboard features twelve focus areas, each of which has four advances cut into it. Each one represents and describes an advance — and the players begin with cubes in mining and farming only. Everything else — from irrigation and fishing to steel weapons, arts and even civil liberties — must be purchased at the cost of an action (one of just three per turn) and a combination of any two food, ideas or gold, all of which are precious resources. 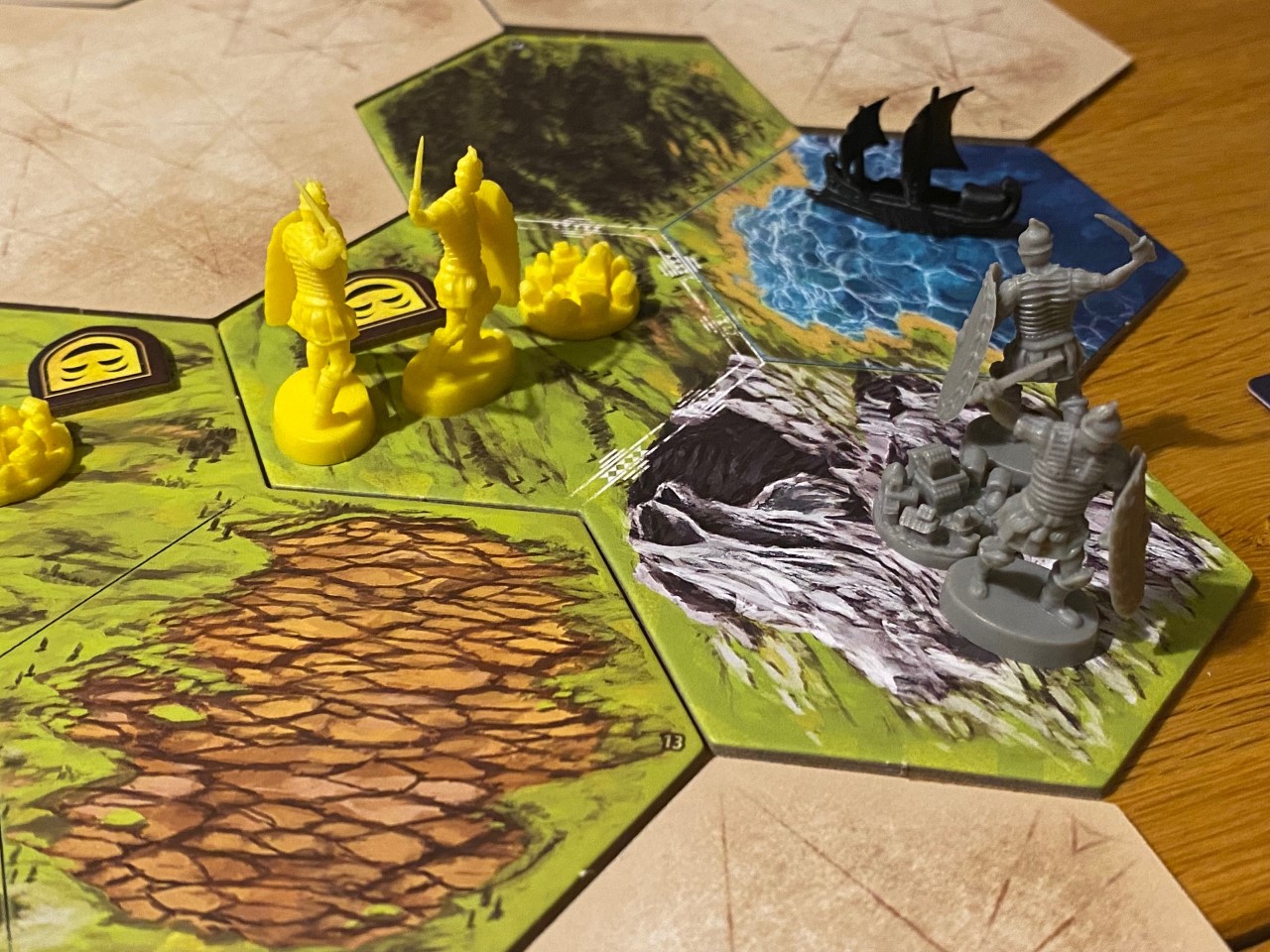 That said, you will want these advances, because each one enhances other parts of the game — including what’s on the board — the other board, that is. That board is made up of a specific number (and formation) of tiles that each include four hexes. Each player begins with a face-up starting tile (which may be specific for certain civilizations) but everything else is face down. With just three actions per turn (and six to choose from) the players will move outwards flipping tiles, settling and expanding cities, building units and potentially, making war.

Technology advances and new buildings drive this process forwards at an increasingly rapid pace, with many advances offering effects such as additional resources during harvest, more effective combat units and lower recruitment costs. Many advances also provide either happiness or culture tokens, which are a slightly rarer resource than wood, ore, food or even gold. Happiness can be spent on various things including making cities happy (which increases production) whilst culture is similar and is necessary for things like building wonders.

By the mid-point of any game of Clash of Cultures Monumental Edition you’ll likely have a strong plan. Points are scored for each advance taken, each objective card completed, every city and building piece and for a few other conditional effects (Event cards, Civilization cards and similar.) A winning score will be somewhere between thirty-five and maybe fifty points in a standard length game, and every point feels hard-won. If you’re not leaning hard into whatever your civ has become good at by halfway through the game (which will be about two hours) then you’re probably in trouble. 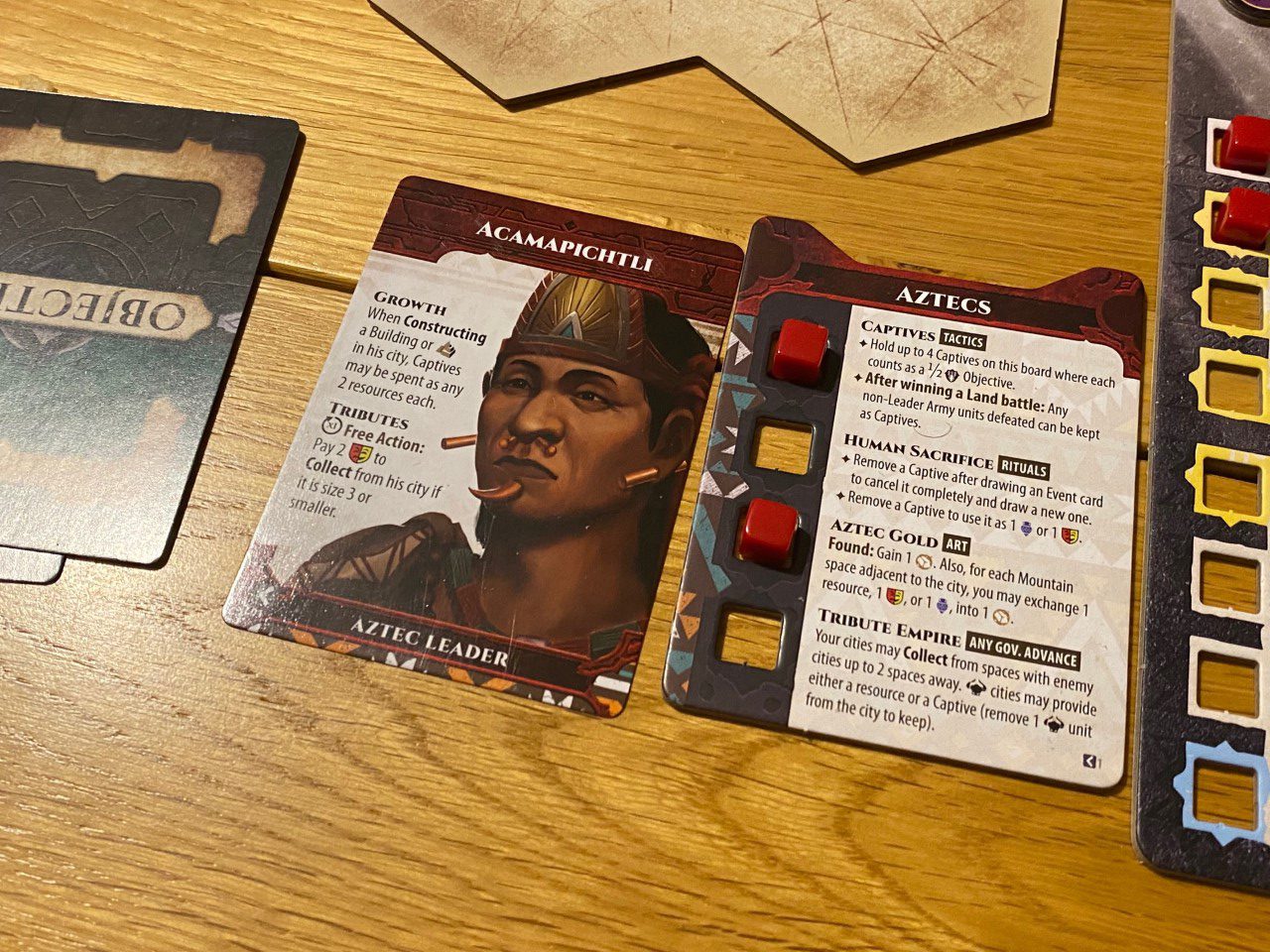 If Clash of Cultures Monumental Edition sounds complex, then that’s probably more because there’s a lot of it, rather than because it’s impenetrable. If anything, the expansion of the game via advances gives it a unique simplicity. On turn one, your choices are extremely limited — gain an advance, move, maybe settle a city or produce. Or maybe you produce once and then advance twice. It isn’t until much later that the small nuances of each advance begin to pull on the softer parts of your brain. It’s the classic “I could do this, or that, but if I do that first, then doing the other thing will be a lot more powerful.”

This makes Clash of Cultures Monumental Edition a joy to teach and for me, a lot of fun to learn and experiment with. I’ve taught this game perhaps four or five times now, and each time, the teach took no more than fifteen minutes. There’s a lot of learning through play here, and everyone who came to the game for the first time commented on how accessible and straightforward the game is, despite its very grand scope and overall reach.

As I said up top, Clash of Cultures Monumental Edition is now my go-to Civilization game. Through the Ages is long gone from my collection, thanks to being very nearly the opposite to Clash of Cultures Monumental Edition in respect to its accessibility. It also helps that Clash looks absolutely glorious on the table. The units (including infantry, leaders, elephants and horsemen) look fantastic, whilst the cities interlock with the buildings in a way that just pops so nicely against the fantastic board art. 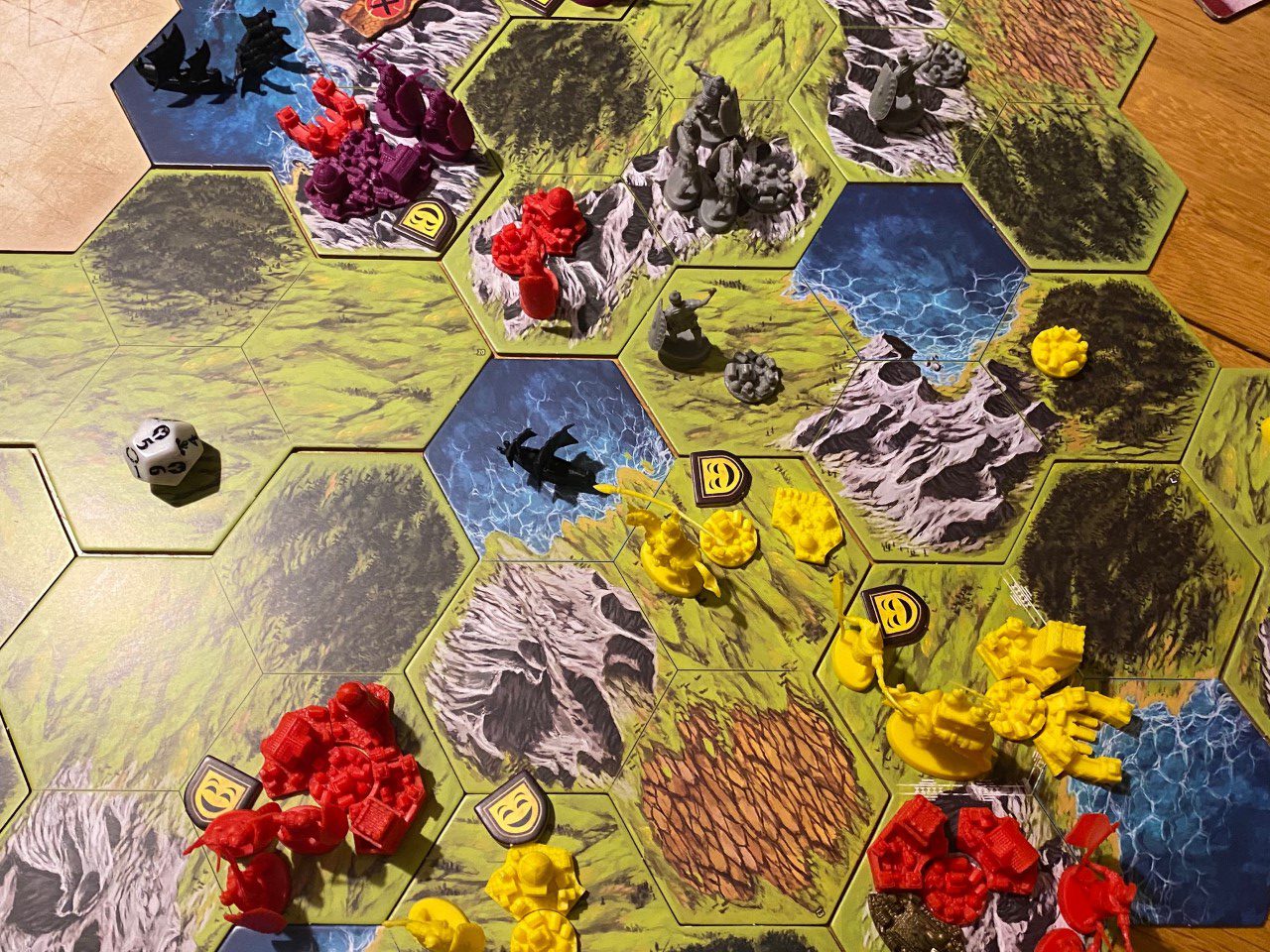 Clash of Cultures Monumental Edition is a fantastic game which leaves me salivating for the next game every time the previous one finishes. There’s always a move, a phase of play or a dice roll that could have gone better. When you win, you can always recall which moves you made that contributed, and when you lose, you’ll rue the one decision that could have scored you two points instead of one (or similar.)

Somewhere between the exceptional production quality, the easy to learn but tough to master gameplay and my own preference for civilization-building themes in general, Clash of Cultures Monumental Edition is very easy for me to recommend. Its only drawbacks are the three to four hour play time and perhaps the fact that by the end of any game, there is so much minutiae to manage that even seasoned gamers will begin to have a small meltdown. It really is a grand strategy epic that I am willing to play almost any time.

Clash of Cultures can be found on Amazon.