In an attempt to keep the spirit of arcades alive, Developers Sumo Digital and Lucky Mountain games have taken a step back in time with their new arcade racer, Hotshot Racing.

Today, it’s near impossible to find a good arcade anymore. I remember going to the arcade in its last few glory days and playing some fantastic games — especially Sega’s classic racing games like Sega Rally 2. Hotshot Racing embodies the same no-nonsense fun that made those games so great, and it’s not afraid to show it loudly and proudly; Even opening with a booming voice declaring the title of the game before you even hit the start button, just like old arcade cabinets.

I think it’s pretty obvious what first gives away the game’s retro inspiration, the visuals. They’re simple, sharp, and super colourful, so about what you would expect from an arcade game. But despite its simplicity, it looks fantastic and nowhere is this more evident than the racetracks. Each of the 16 tracks — 32 if you count the mirrored versions — had so much colour and personality it made racing around them an absolute joy, with each having little touches here and there like a dolphin leaping from water as you drive past that just added more spectacle to an already pretty stunning game. The same could be said for the cars and racers, that while aren’t quite as interesting to look at still had a great amount of variety and uniqueness to them.

So it may look the part but for a racing game what’s most important is how it plays; So does the gameplay hold up? Yes, it holds up pretty damn well.

Each of the 10 drivers has four cars to choose from, with each focusing on a certain aspect of driving such as speed or drifting etc, with each controlling just differently enough to keep things interested from racer to racer, and with the driving controls striking the perfect balance of feeling weighty and nimble at the same time, moments like drifting around corners incredibly satisfying as you cut pass, other drivers, with particle effects and haptic feedback playing into the whole experience; it may not be the same as sitting in an arcade chair, but it’s still really fun nevertheless. But don’t go thinking you’ll be tearing up drivers, as even the normal difficulty will put you to the test, and higher difficulties testing your driving chops with more than one occasion where it was neck and neck with another driver right up to the finish line. 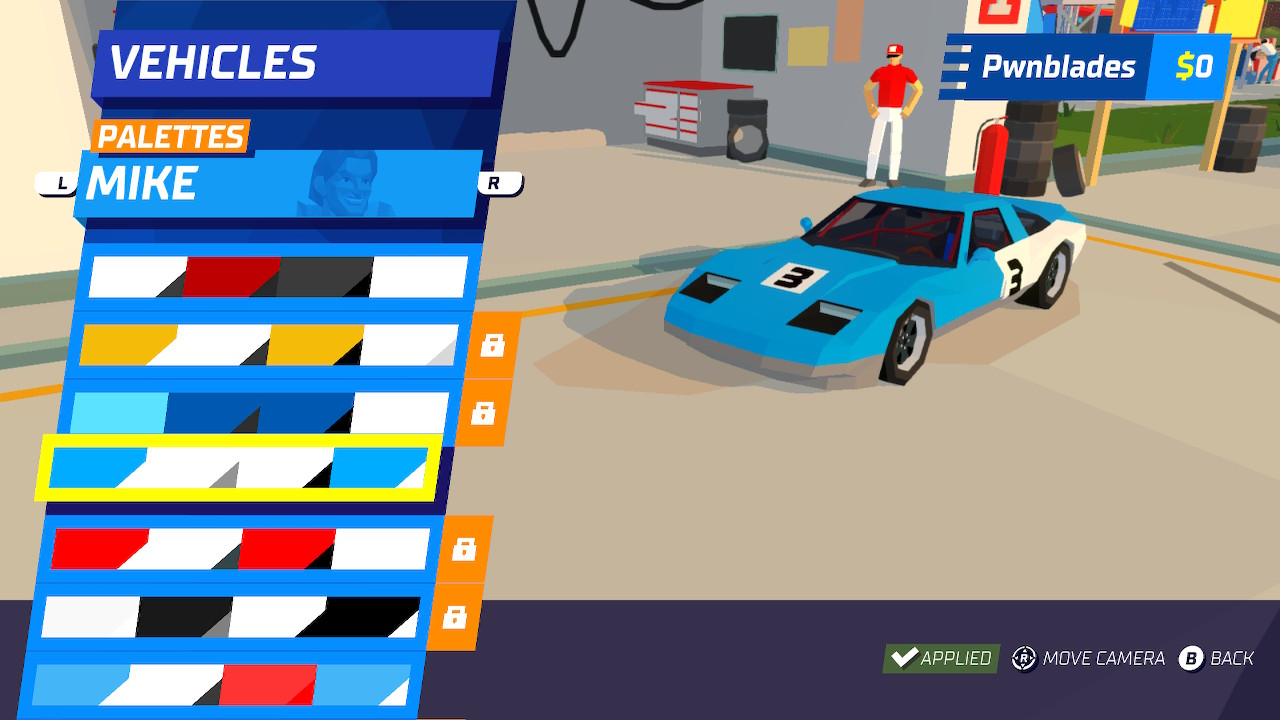 What’s more, you don’t just have to play standard races to test your mettle. With both online and local with up to four players, Hotshot Racing has a great amount of modes to keep you busy. As well as a tried and true time trial mode and the four Grand Prix circuits — each with three difficulties — you have several extra modes to take on. A standout mode being ‘Drive and explode’, which takes a normal race to an explosive extreme. In it the drivers have to stay at an ever-increasing speed to keep their car health from depleting and their car exploding, all whilst trying to win the race. This was easily the mode I enjoyed playing the most, with simple manoeuvres like drifting becoming far more intense as I tried to avoid contact with anything to keep up my speed. It may sound easy, but trust me, one slip up is all it can take to send your racer up in flames.

One mode I didn’t find as exciting however was cops and robbers, in which certain players are tasked with chasing down ‘robbers’ and attempting to beat their cars into oblivion, eventually becoming another police officer to chase the remaining drivers. It sounded like a nice change of pace from the usual racing game modes you would expect, but in actuality, it ended up being a little too finicky for me to enjoy as id often be stopping and starting so much I barely got any contact with robbers when playing as a cop; being a robber was ok, but it just involved driving and avoid the police which didn’t exactly make that much different than playing a normal race, other than the money you earn with each checkpoint you pass. So it’s not the game’s best showing.

If the variety of modes wasn’t enough to keep you busy, the nice list of challenges certainly will. With each racer and their vehicles having their set of challenges to complete, you’ll find plenty to do if you want to scratch that completionist itch with challenges ranging from time drifting to winning a race with each of the driver’s cars. As well as feeling the satisfaction of completing the challenges, you also unlock customization items for each of your cars and racers, letting you personalize them with different colours and car parts. Now I’ve said before how much I love customization, and that’s certainly no expectation here. But it’s certainly not the most extensive set of tools you’ll find in a racing game, but the fact it is included is a nice touch nonetheless.

I can’t imagine I’ll get a chance to enjoy the old school arcade much in this day and age, but Hotshot Racing injected that excitement back into my gaming life in spades. While it can become a little stale if played for extended periods, it offers some of the most fun I’ve had playing a racing game in ages, with free content like new tracks and modes on the horizon only sweetening the deal. 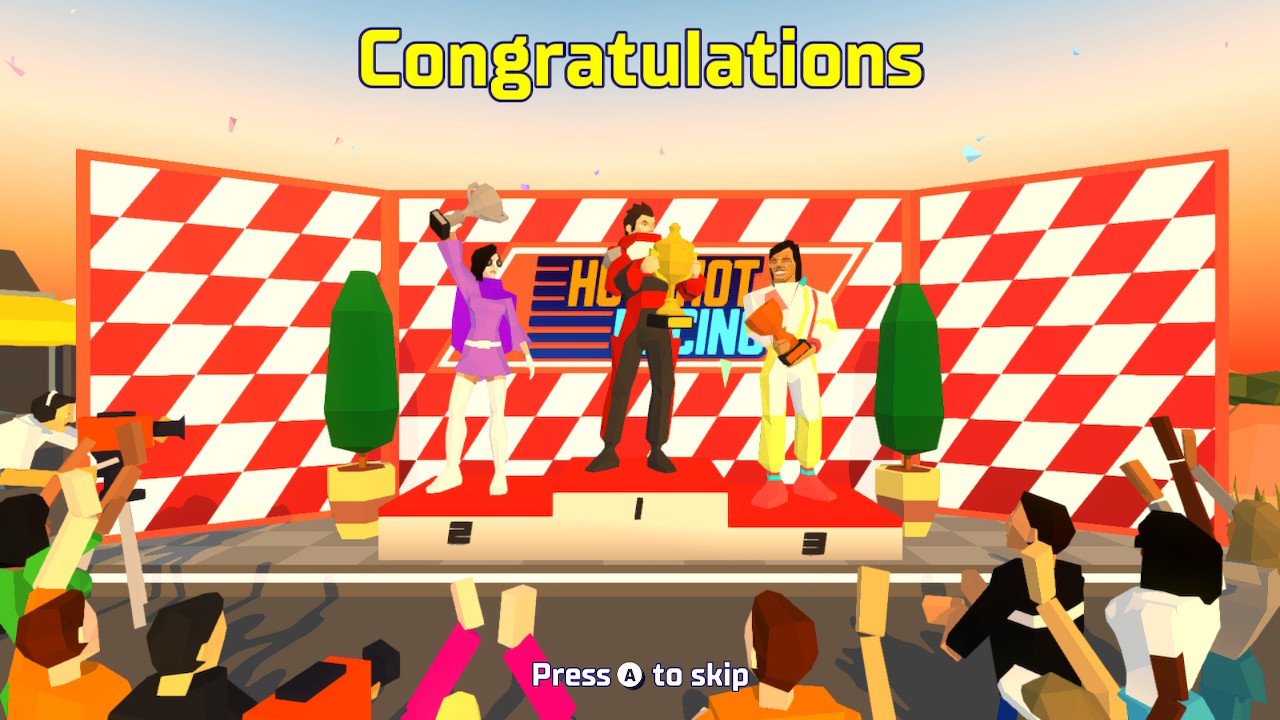 I highly recommend the switch version which I was provided for this review, it ran great in both handheld and tv mode and gives you extra freedom to settle old scores wherever you want. Whether with friends or playing alone, Hotshot Racing is a prime example of nostalgia done right, and one I would be more than happy to hit the track again in the future.

Hotshot Racing is available on PC, Switch, Xbox One, and PS4. Check out the games Twitter and Website for more details.