Small World of Warcraft is late to the party, but it comes with beer and snacks, so…

Exceptional collaborations come in many forms — gin and tonic, bacon and eggs, Starsky and Hutch, to name just a few. In media such as board and video games however, such collaborations often seem doomed to failure as creative differences stifle whatever made the individual source IP’s interesting to begin with. Small World of Warcraft is a collaboration that seems well placed to buck this trend, and as soon as I heard about it, I was keen to see if it was just a gimmick, or a worthy successor.

I guess people who are considering purchasing Small World of Warcraft will fall into one of two camps — either they own Small World (and possibly some expansions) or they don’t. In either case, the World of Warcraft branding (complete with races, artifacts, artwork and lots more that will be familiar to players of Blizzard’s omnipresent MMO) may be of interest, or maybe it won’t. 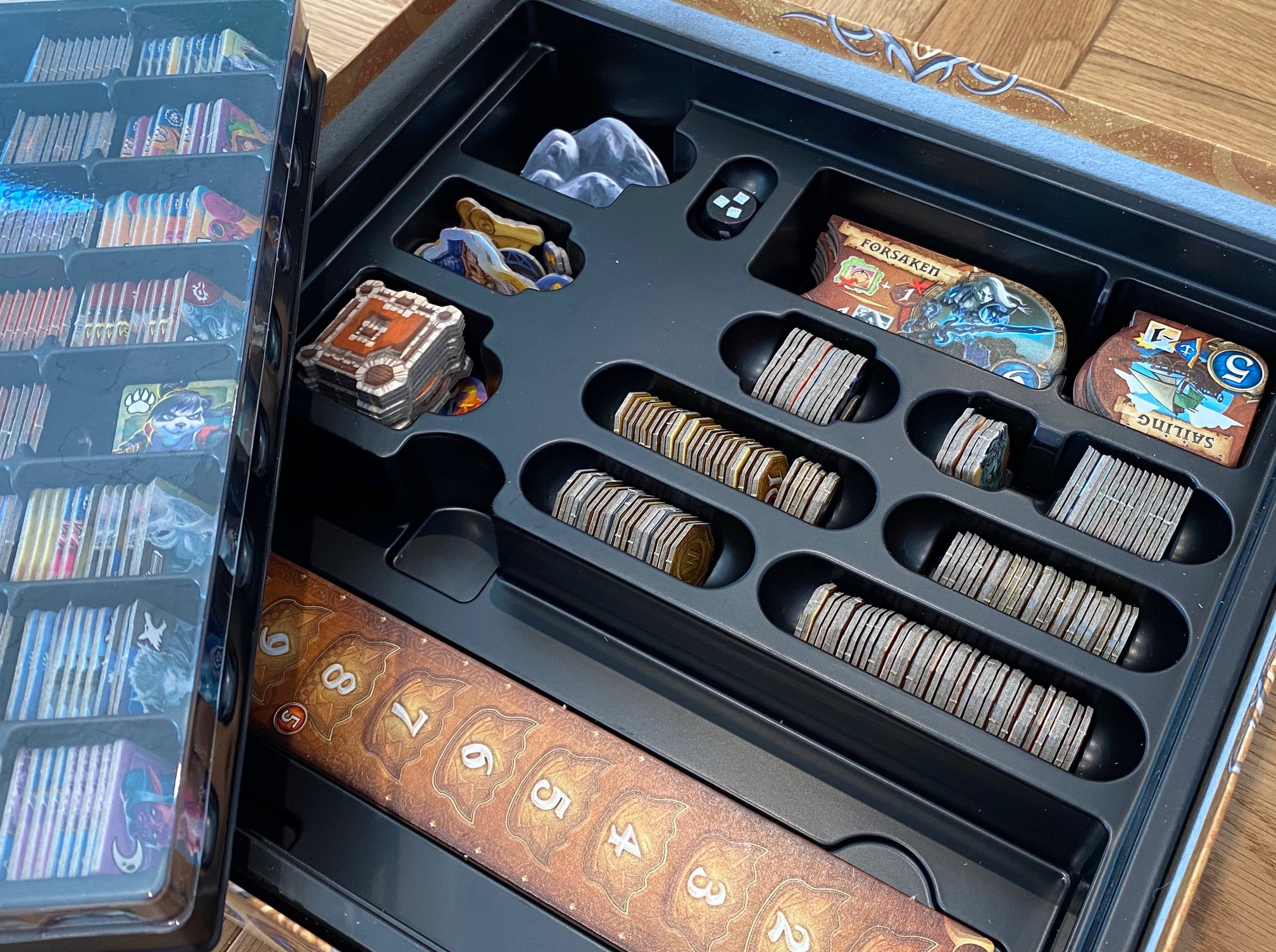 On the basis that you’re still reading because you’re in the latter camp — and don’t know a lot about Small World — let me tell you a little about it. Both the original game and Small World of Warcraft are area control games that thematically take place over several generations. The idea is that the players never control a single race within the game, instead choosing to back races one at a time as they reach their peak, and then choosing when to put them into decline — at which point they steadily exit the game.

Whilst you might think this idea would work well with the classic selection of ancient civilizations such as the Romans, or the ancient Egyptians (and it probably would) the Small World of Warcraft model instead takes races from World of Warcraft, then jumbles up a load of possible bonuses to create wacky combinations such as “Fishing” or “Defensive” variants.

When you take a keyword like the two above and add it to a race such as Orcs, Gnomes or Goblins, then you get some fairly wacky combinations. Defensive Orcs, for example, or Mining Night Elves. Fishing Pandaran are a favourite of mine, whilst Intimidating Ghomes is bound to cause a giggle around the table. 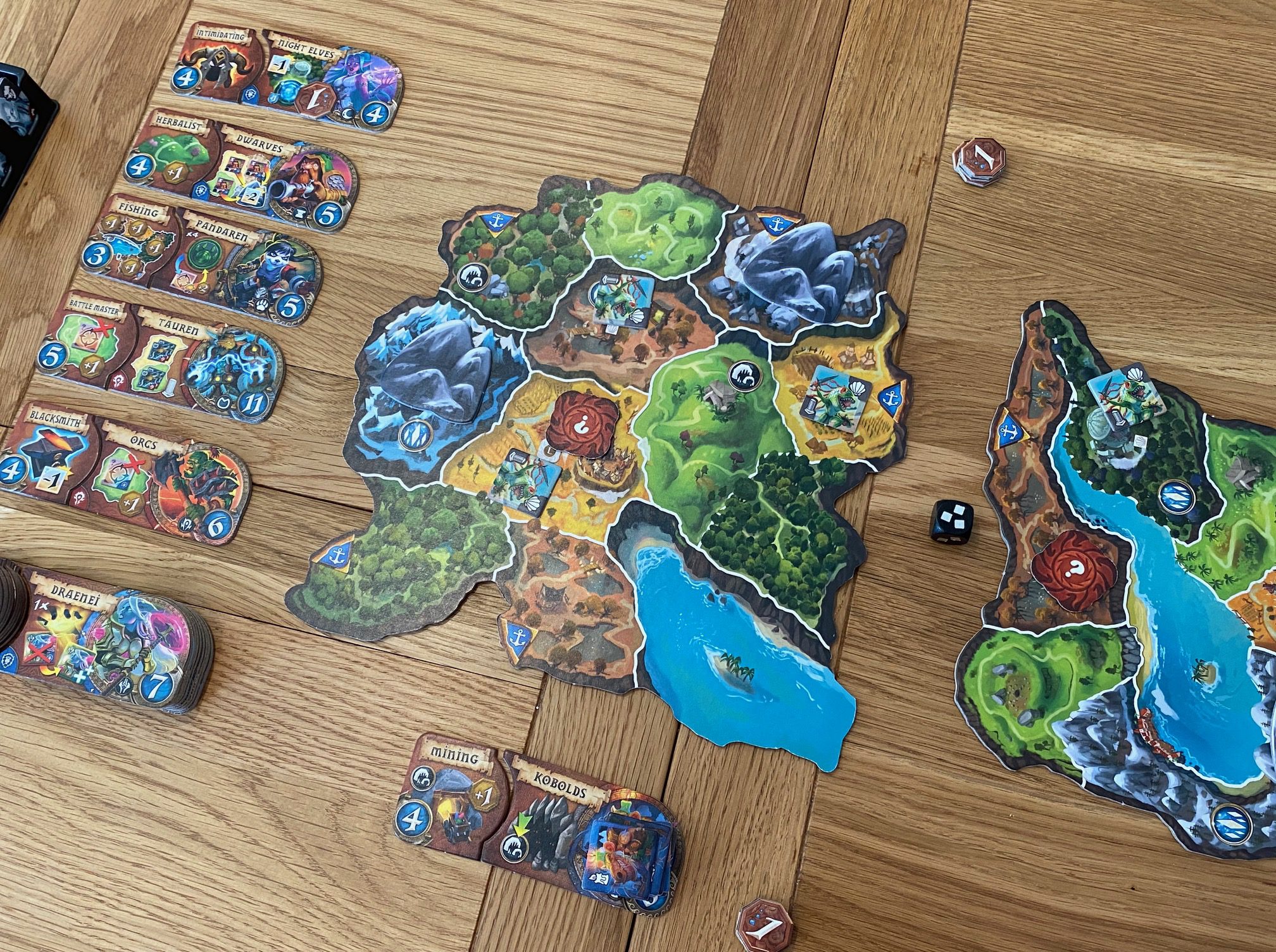 With their initial choice of race and ability made (from six face up combinations visible at any time) the first player will begin to populate the map. There’s a tiny bit of fiddliness here, but it’s nothing you won’t get over within half an hour of beginning your first game. In simple terms, the way in which races move out onto the map is at a rate of two of their race tokens per space, modified by plus one for each natural barrier or opposing race token is already there.

For example, to enter a “landing” region (which has an anchor symbol) the cost is the usual two race tokens, plus one for the landing itself. Moving outwards from there, normal regions that are unoccupied would cost two race tokens, whilst if there was a mountain region, or an indigenous Murlok token there, then the invading player would need one additional race token per obstacle.

This is important even on the first turn, because players can extend their race as far as they can in a single turn, so in those first few turns especially, each player will likely conquer at least three or four spaces. If, at the end of their turn, they have one last placement to make and not enough tokens to do it, they may declare where they’d like to invade, and then roll a dice to see if they get a bonus or not — this can allow a race to overreach, or if they don’t make the roll, they must instead place their remaining token(s) onto a space they’ve already taken. 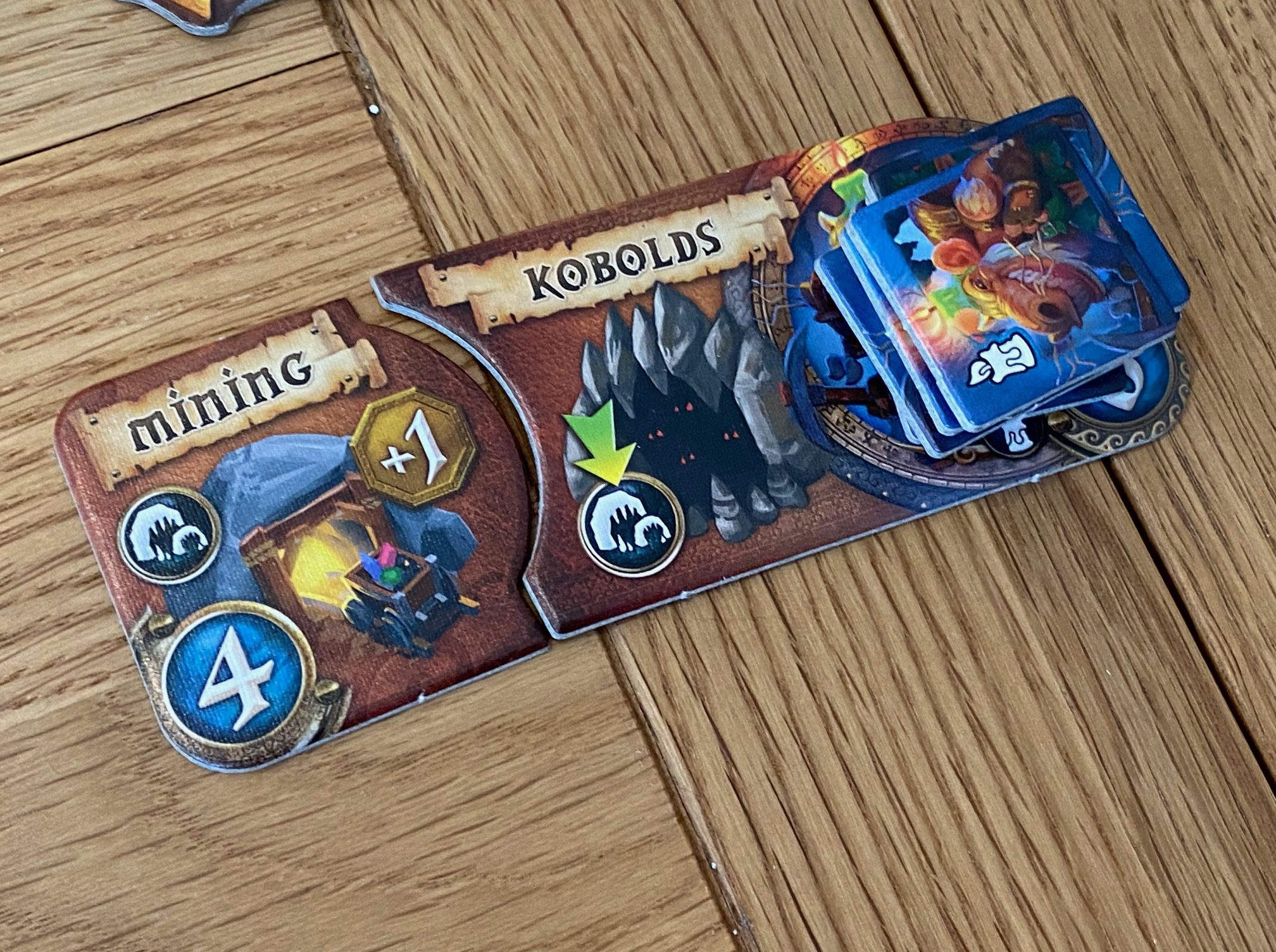 With conquering now done, the player may pick up all of their race tokens (leaving one in each territory they own) and redistribute them freely among all held territories — thus allowing them to fortify certain fronts against possible invasions by the other players. With this done, they will then claim victory point coins for each territory held, as well as for any bonuses that their race, or the associated ability offer them.

Players will take turns to do this for as long as their race remains active—- beginning their turn by picking up all the race tokens except one in each space, and then invading neighbouring territories as they see fit. As conflict between the different players escalates, race tokens will be removed, reducing the amount available for redistribution. As soon as it becomes more difficult than it is worth to keep extending a race, you’ll want to consider putting it into decline.

When a player does this, they will essentially be skipping their turn, and rather than expanding their race, they will instead flip over their race and bonus tokens, then they’ll remove every race token except for one on each occupied territory. They will then flip each of those remaining tokens and score any controlled territories as normal. On their next turn, they’ll choose a new race and ability combination to become active, and then they’ll invade the board again, just as I described above. 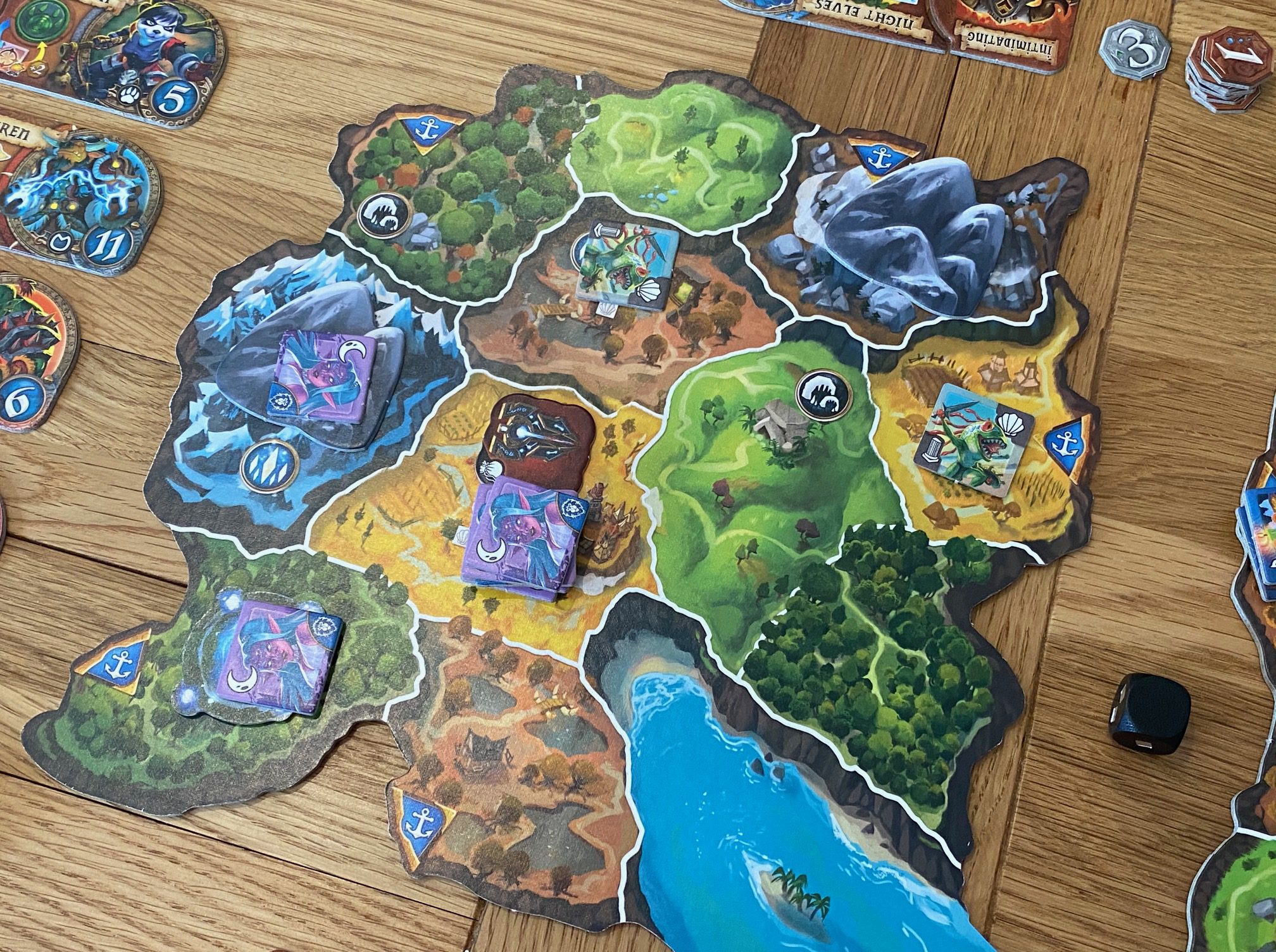 Once a player reaches the point where they wish to retire a second race, then if there are any traces of the first race left, they will “vanish” and be removed from the board completely. This essentially means that from the early middle to the late game in Small World of Warcraft, each player will almost always be scoring spaces held by a single active race (which generates bonuses) and an in-decline race, which never expands or generates bonuses, but does still score for any lands it holds.

Small World of Warcraft introduces a few unique aspects that weren’t in the original game (but which might have been in expansions) in the form of artifacts and special locations, which grant bonuses to whoever holds them. Some races also place features onto the board like towers or Wispgates, and these come with their own rules and unique twists that affect the gameplay.

Thankfully, Small World of Warcraft features the same superb production quality that Days of Wonder games have become famous for, and in this case, there are five thick card player aids that can be distributed between the players to provide helpful reminders about board features, race abilities, artifacts and so on. This means that after a few turns, no one is likely to need to consult the manual ever again. 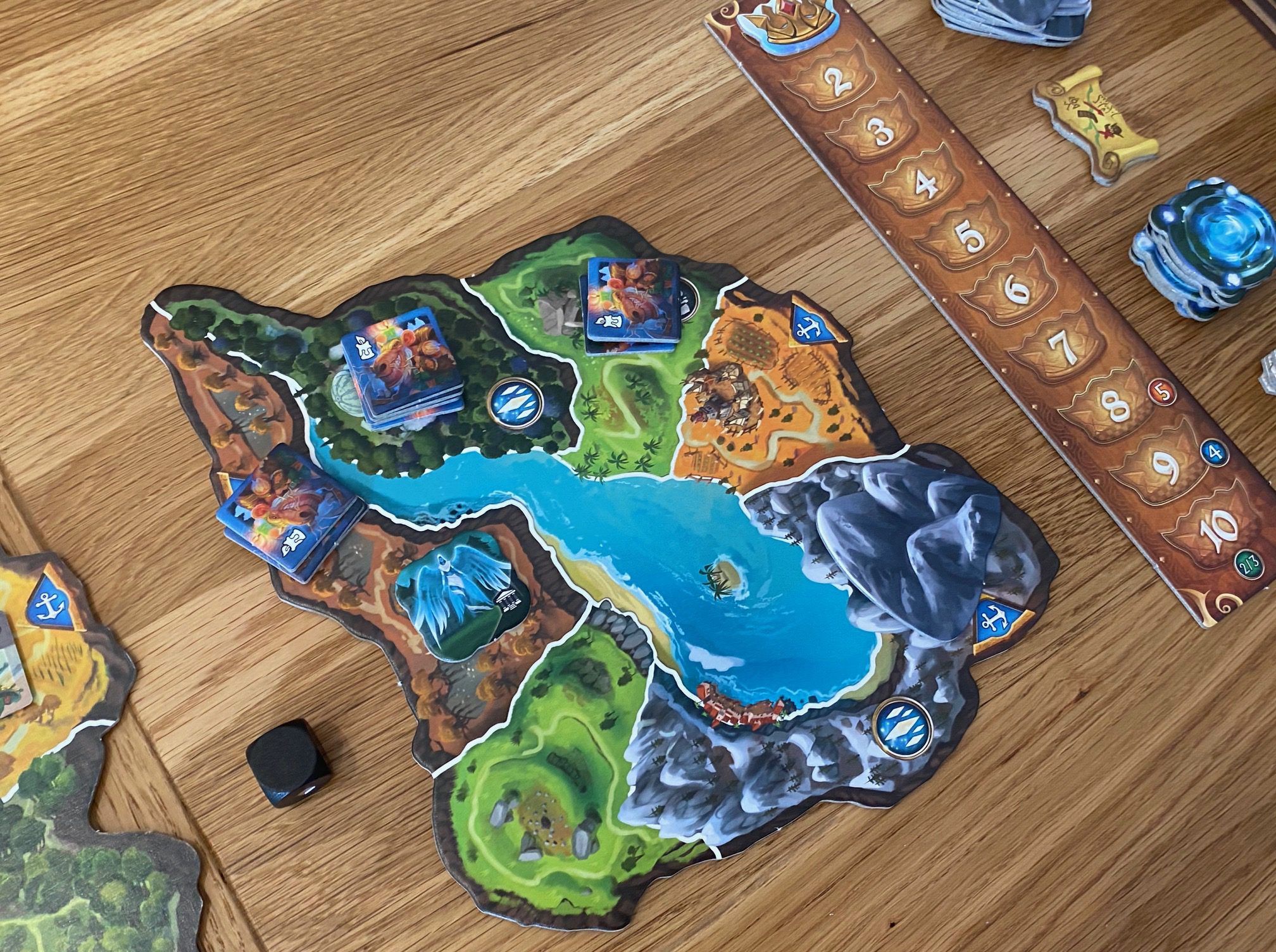 Other rules that are unique to Small World of Warcraft in comparison to the base game are the Battle for Azeroth mode, which pits the players against each other in two teams, drawing their races from the sides marked with either Alliance or Horde symbols and introducing a few new rules. These symbols also matter in normal gameplay, and additional VP can be earned by sides representing either faction taking territory from the other.

The gameplay in either of these games is top drawer, and Small World of Warcraft is a superb choice for anyone who is looking to introduce a person who likes video games to board gaming, thanks to the simple gameplay. In general, Small World of Warcraft and the original are both games that provide almost gateway levels of complexity into area control games, which are often complex affairs (like Blood Rage, Lords of Hellas or Cry Havoc.) 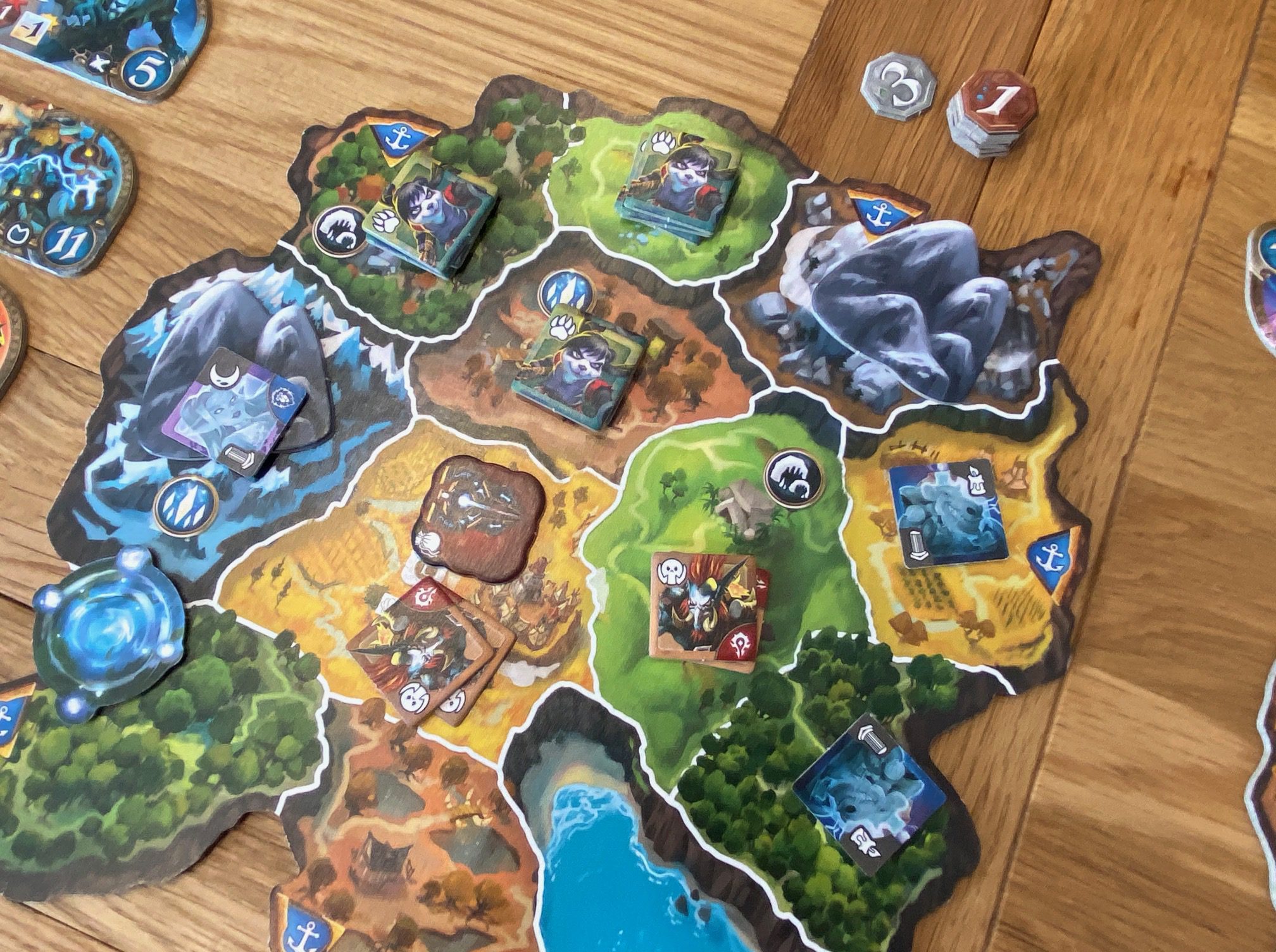 The look and presentation of Small World of Warcraft is, as I mentioned earlier, fantastic, and the integration with World of Warcraft IP is as high as you would expect. The pieces are chunky, the artwork glorious, and even the insert is made to a high standard that really helps organise the large number of pieces and tokens that represent the many races in the game.

And there you have it. If you’re undecided on which version of Small World to buy, then my advice would be to dive into Small World of Warcraft, simply because its newness and the extra rules it brings make it feel slightly better value, especially considering that it has even more delicious artwork than the original. That said, unless you’re a huge fan of World of Warcraft, there’s little need to trade in your old copy of the game for this one, and if you already have some of the expansions, you’ll end up with a slightly less complete experience.

You can find Small World of Warcraft on Amazon.