Horizon Zero Dawn has been incredibly popular. Even before release fans were singing praises to the graphics, to the details, the story, and more. Yet, for some reason, people don’t know what it’s called.

When running a piece on the soundtrack being released on Spotify yesterday, I noticed an odd hashtag when pushing the post about Guerrilla Games’ latest blockbuster title to social media. I didn’t think anything of it. Later on and EiC, Dann posted a Twitter screenshot of the trending hashtags, and there it was again, the rather oddly named hashtag. 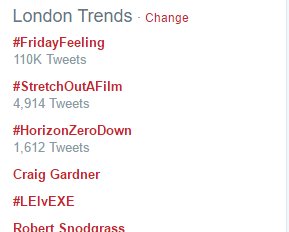 Now what’s interesting is that not only is the title one of the most talked about games these past few weeks, but also, amongst the 1,600+ users posting about the game with the wrong name are users who are posting pictures of the box art that feature the correct name.

Obviously some accidental spelling errors have resulted in the hashtag to become a recommended hashtag, so users are just typing in “HorizonZ” or something then clicking the “HorizonZeroDown” without noticing the error, but still, it’s a funny error to warrant 1,600+ users to do it.

Here’s some great ones below. Box art on display, Spotify cover, and a cosplayer!

It’s nice to see people enjoying the game regardless of what they want to call it!