Help a Three-Legged Fox to Save its Parent in Bushy Tail, a Storybook Adventure

A tale of tail.

While at PocketGamer Connects London back in late January I was lucky enough to judge the PC Indie Pitch, an event in which over a dozen games enter, seeking to win a selection of prizes from the event organisers. I absolutely adore judging these panels as its sometimes the first time some of the games have been shown off — and even if not then it’s always interesting to spot upcoming trends in the industry.

Bushy Tail is a narrative adventure game which follows the story of ‘Little Fox’, a three-legged fox which has lost its parent, and must explore a strange and ever-changing world as to try and track them down. The big twist? ‘Little Fox’ is part of a narrative driven by three children who are entertaining themselves in the absence of their father, who himself is absent at a time when he would normally be reading the siblings a bedtime story.

In literature there’s a common concept called the ‘Unreliable Narrator’. An unreliable narrator might make up elements of the story which don’t fit, or might bias against things through their telling, they may simply remember and tell the story wrong; The Usual Suspects, Fight Club, or Baron Munchausen are all fine examples of it. Bushy Tail doesn’t suffer an unreliable narrator, instead it features three excitable, inconsistent narrators who —like the children they are— correct and overtalk each other, twisting and changing the world around the player as they explore the world around them. 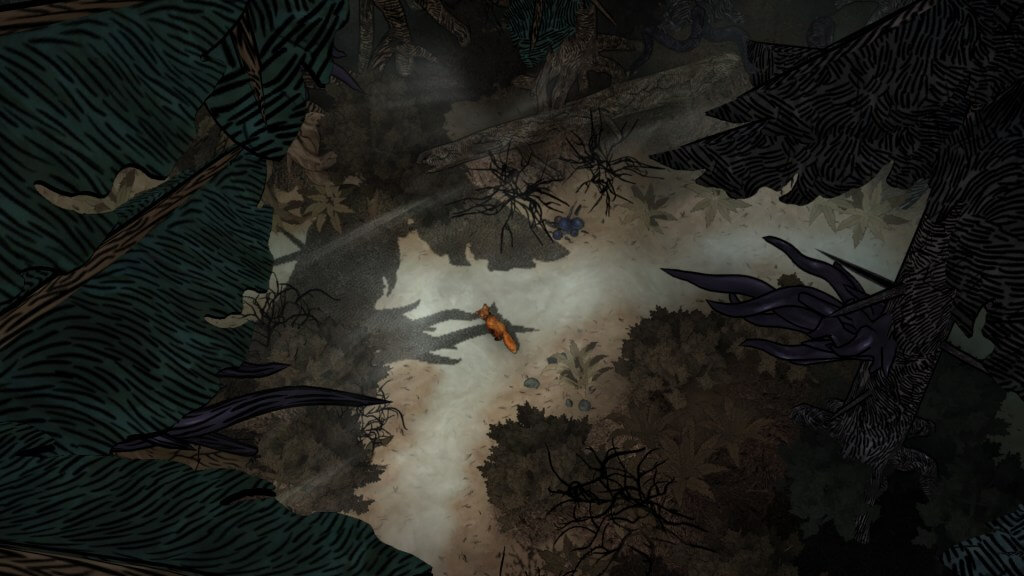 The whole game has a wonderful, storybook style to it. Scratchy, sketchy lines shade the objects of the world, quickly betraying the Brothers Grimm’s influence on Fuero Games’ next outing. Pieces of the world twist and peel into existence around the character almost like a pop-up book. In the later sections both these and a shifting camera guide the player, steering a slowly-trotting player through the barbed undergrowth and around gigantic, creaking forest trees. The narrators audibly scaring themselves as they discuss a fallen bird, and how the forest seems to be growing increasingly dark.

It’s not simply visually intriguing however, barring one exception — which I’ll get to in a moment — the audio was, somehow, equal to the visuals. Whistling wind plays just as curled spirals wrap through the air around the protagonist while trees roared as they burst from the ground into the story. Perhaps the most impressive feat however was the voice acting, each of the three voices were instantly distinguishable, and the age-structure of the three was obvious; a feat which requires deft writing and impressive voice talent.

As the three narrators shift, which they do regularly, they each add in their own elements to the game. The first level which was shown off featured each leading the fox (and player) through a blooming meadow through three butterflies, with the third entertaingingly feeling as though the youngest had simply copied their siblings. Later one of the children interrupts another and bursts a maze forth from the ground for the fox to navigate much to the chagrin of the other two, ‘I love mazes’ they explain in response.

I did feel that, in the two levels I got to play, the biggest issue was pacing. The second level demo’d, which saw me creeping through a forest, was magnificently timed and captivating, and —indeed— the latter half of the first level saw me navigating a maze (I love mazes) which played out well. The start, however, underlined a flaw with the waypoint/trigger settings in the game; I could fully sprint, reaching markers before the previous audio had played out. Of course, that said, those are easy things to remedy.

There’s no estimated launch date for Bushy Tail, or even defined platform plans. It is set to appear at EGX Rezzed later on in the year, as part of the Leftfield Collection, where I know that several members of the team — myself included — will be giving the game a quick play.

5 announced, in development games where you can play as a fox