I’ll say at the top that I wasn’t expecting Hell Let Loose to be one of the best games I’ve played all year. But it is. It’s quickly become without a doubt one of my favorite multiplayer games, period. A first-person, squad-based tactical shooter with a strong realism element, Hell Let Loose takes its inspiration from historical WWII battles and earlier Battlefield games. Although the gameplay is far closer to 2011’s Red Orchestra 2 than to what the majority of today’s online shooter fans would find familiar. A first-person shooter that prioritizes collective effort and goals over personal success? Sign me up.

Across enormous, detailed, historically accurate maps, two teams of 50 players fight to take and defend control points by building outposts, collecting information on enemy tank positions, and just generally holding the line. The tactical element of Hell Let Loose values communication and coordination much more than twitchy reflexes and personal kill count. Yes, you’ll need to shoot, but if you run off on your own you’re going to have as much fun as any lone soldier behind enemy lines would. Not only does the game feature an extremely low time-to-kill where the merest scent of a bullet seems to drop you or your enemies dead, but it places a heavy emphasis on communication between squads, vehicles, artillery and the strategic deployment of resources. This is war! And in war there is a lot of work to do, so keep your head down and listen to orders, Private!

By the way, some of you seem awfully quiet right now, so I’m going to state the obvious: To play this game you’re going to need a microphone, and to use it. Squads are made up of as many as six members and they communicate via squad radio. You also can also speak to fellow soldiers within a radius of 50 meters. Communication is key. If you don’t know what goal you’re trying to achieve it all can seem overwhelming or even pointless. Each squad has a squad leader who has the ability to set down respawn points and direct the actions of the squad. They’re also on an additional radio channel with all of the other squad leaders and with the commander. Yes, that’s right. If you’re a squad leader you have three different push-to-talk buttons for communication. There is also a commander position and if you are brave enough to take on the responsibility for your 50 man army then Hell let Loose becomes a first-person real-time strategy game. But more on that in a moment. 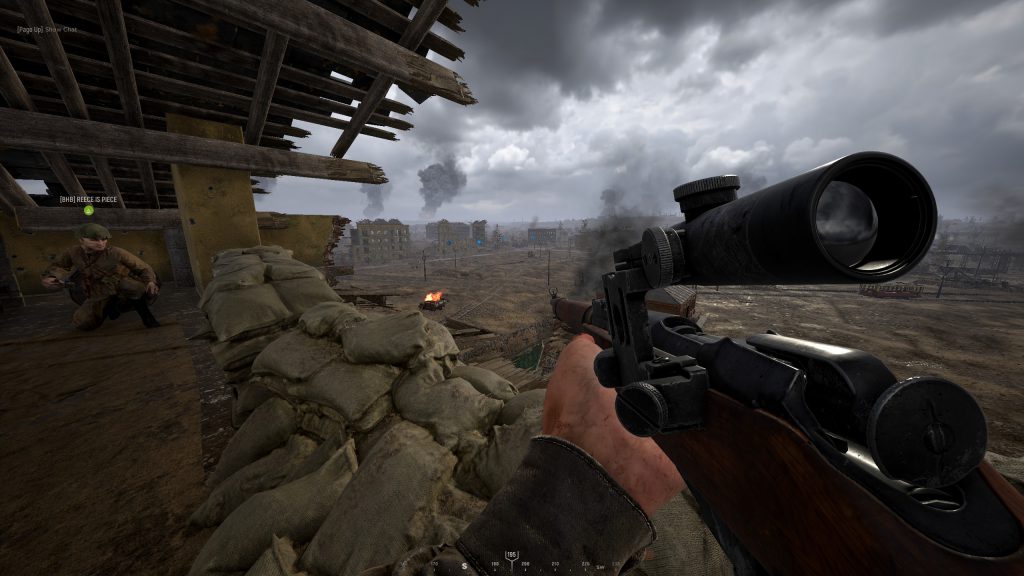 There are a whopping fourteen classes to play as, but the beauty is that Hell Let Loose’s complexity is adaptable to the desired style of play. Are you, for example, a new recruit who wants to shoot the enemy? No problem. Take rifleman or automatic rifleman as your starting class. For a more varied experience you can play medic, or as assault, responsible for taking out enemy tanks.

Do you want to drive a tank? Well then, hop in. Tanks squads are groups of three: one to drive, one to spot enemies, and one to shoot. There is also an engineer class, responsible for building up supply nodes and refuelling stations, and two-man recon teams: a sniper and a spotter. If you become the commander you are responsible for calling in planes for bombing runs, directing artillery, ordering squads to attack, flank or defend, and more. 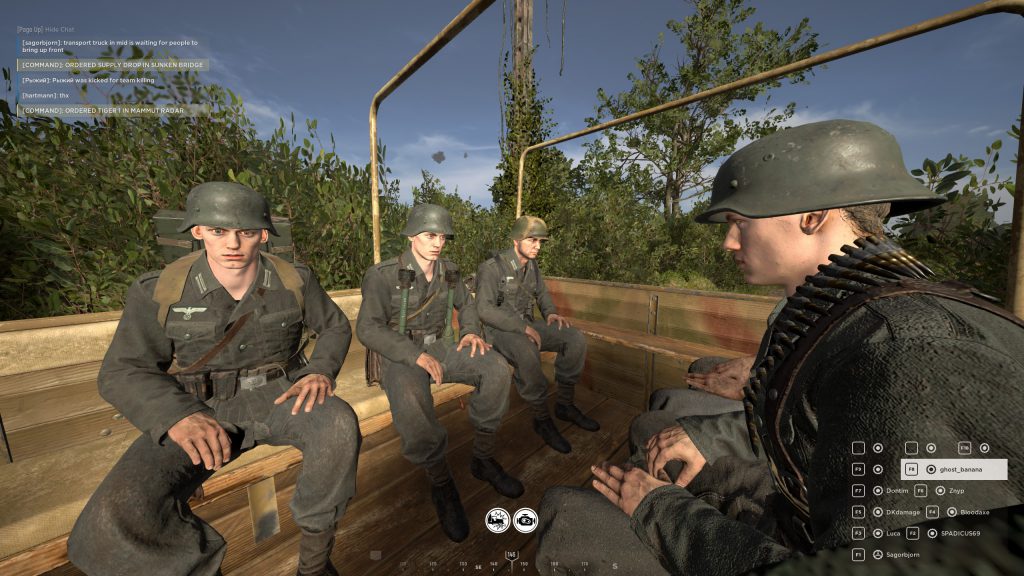 A successful battle relies on the building of garrisons and the portioning of supplies. While a squad leader can put a spawn point for his team down almost anywhere, garrisons have to be spaced 200 meters apart and any soldiers on your team can use them. And they have to be build with supplies carried by the support class or transported up by truck from the rear line. This real-time strategy layer adds a wonderful sense of realism to the game. Even if you’re just playing as a rifleman in the trenches, there is a chain of command above you carrying their orders and strategies. Looking at the map and anticipating the flow of combat and possible enemy tactics is key. 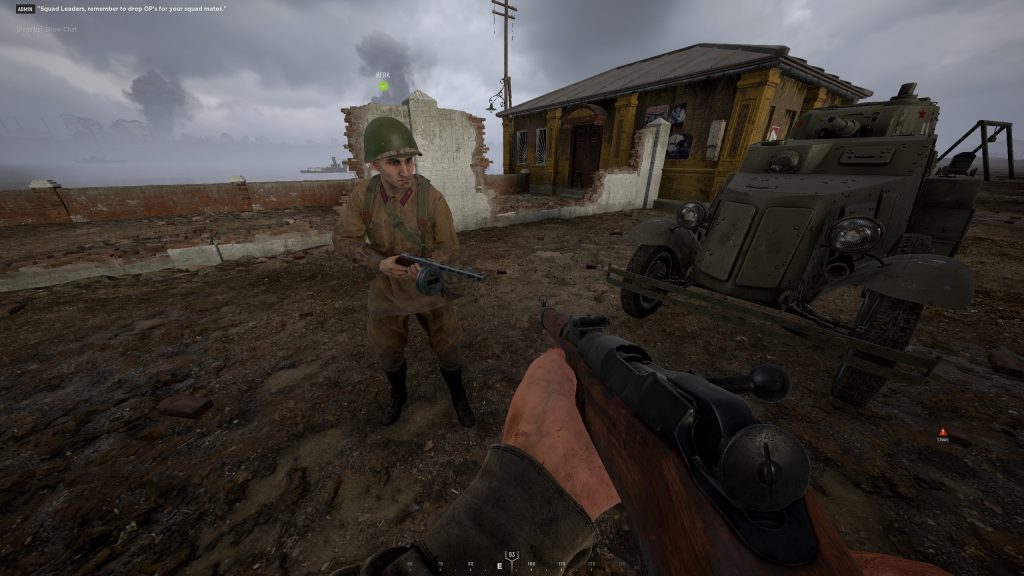 It is difficult for me to think of a game that does a better job painting so vividly the complexity, spectacle and comradery of war. It does such a good job of balancing realism with requirements of playing a game. The quality of matches always depend on the leadership and amount of communication happening between squad members. The community playing this game tends to be older and engaged. Like I said, the game isn’t particularly fun if you want to play solo. In over twenty hours of play I’ve only encountered one toxic player and he was just playing music loudly. Most are there to work together and succeed.

While not every round you play will be fabulous, with some luck you will regularly enter a squad with a squad leader actively directing his squad and actively working with the chain of squad leaders and the commander to achieve victory. And this is when Hell Let Loose begins to sing. It becomes as engaging and immersive as any multiplayer game I’ve played. It creates the experience, long-promised by networked video gaming, of being just one soldier on a massive battlefield with everyone fighting for goals bigger than any one individual. And it does this while regularly giving you, the player, dramatic sequences of glory and devastation that are both fully contingent on the actions of all the other men around you and look like something out of a film. 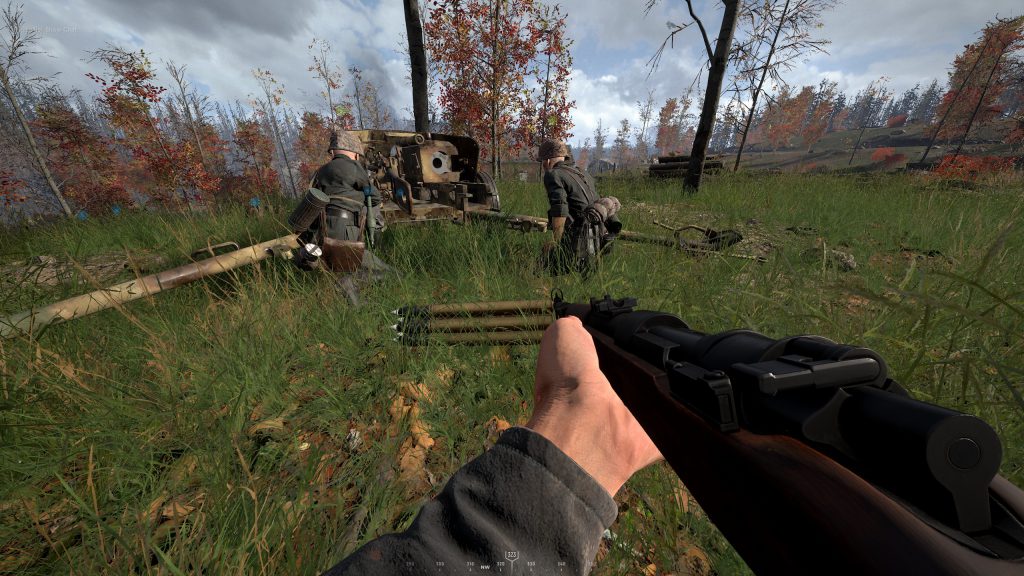 For example, here is just one small encounter stuck in my mind. I peeked around the tall hedge running south down the road. In the middle of it to my right sits the blasted shell of a former tank. It’s on fire. Behind it is the body of a fellow wounded soldier bleeding out in a dark crater. I’m a medic and I need to revive that man. I duck low and scurry across the road. Just as I reach the tank, an enemy unit begins crossing the road not 100 meters away. I go prone behind the twisted tank metal, opening fire to the south. A friendly squad appears alongside the hedge returning suppressive fire on the enemy, giving me the opportunity to crawl back towards the crater to revive the wounded man. Meters away from reaching him, a plane screams past overhead, bombing the road. I survive but the wounded soldier is blasted to bits. I am left lying prone on the road with nothing but a thin border of the crater as cover. 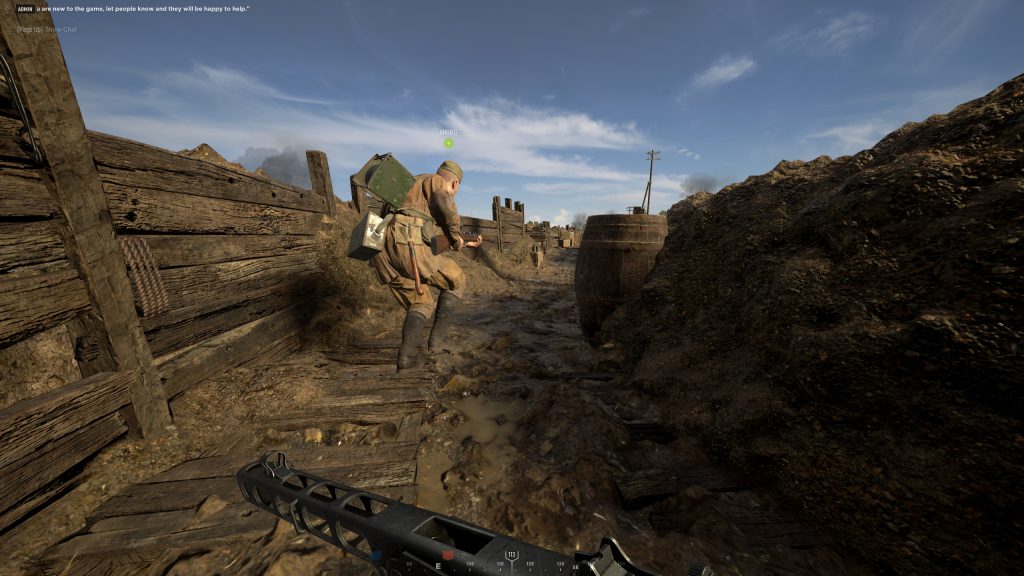 Hell Let Loose isn’t perfect and it has some issues, even following its full release into 1.0 this summer. The graphical performance is not great, no matter how souped up your PC might be. This has got to be the only game on Earth where increasing the field of view to 120 dramatically increases your framerate. Some tweaking will be needed. The lobby interface is bad and no joy to use. Games that are full will regularly be shown to have 95-98 players, although no spots are available and queuing is not possible. At the very least, I hope a language option is added, allowing you to search servers in your own chosen language. Very important (for me at least) not to end up in a lobby speaking only Polish or Russian.

These quibbles aside, you’d be hard pressed to find another current game in a WWII setting with more tactical depth and dramatic spectacle. Hell Let Loose is a unique first-person shooter that prioritizes teamwork and communication to such an extent that you begin to feel like a small soldier on a real-time strategy battlefield. If that sounds appealing, and you don’t mind communicating with strangers on the Internet to capture digital fortifications and objections, all while humming George M. Cohan’s 1917 wartime classic “Over There” under your breath, then I can only recommend it.

Hell Let Loose is available on PC and is currently in development for consoles.