Super Truffle Pigs channels Silk but the reward is less complex, and all the sweeter

While I am always willing to tackle a pre-production board game with an open mind, I will admit to being sceptical when games turn up with little or no fanfare. I don’t know why, but board game news travels fast usually — and with big-budget Kickstarters, it’s become normal to see mock ups of games and read pages and pages of text about them, long before core mechanics are finalised. Where Super Truffle Pigs is concerned, I’d heard nothing whatsoever.

And in this case, that might just turn out to be quite a blessing. You see, where I am ever more often disappointed with the latest million-dollar pile of plastic to go through whatever the current favourite Crowdfunder is, Super Truffle Pigs has delivered a pleasing antidote — and it hasn’t even been funded, or finalised (or whatever) yet! 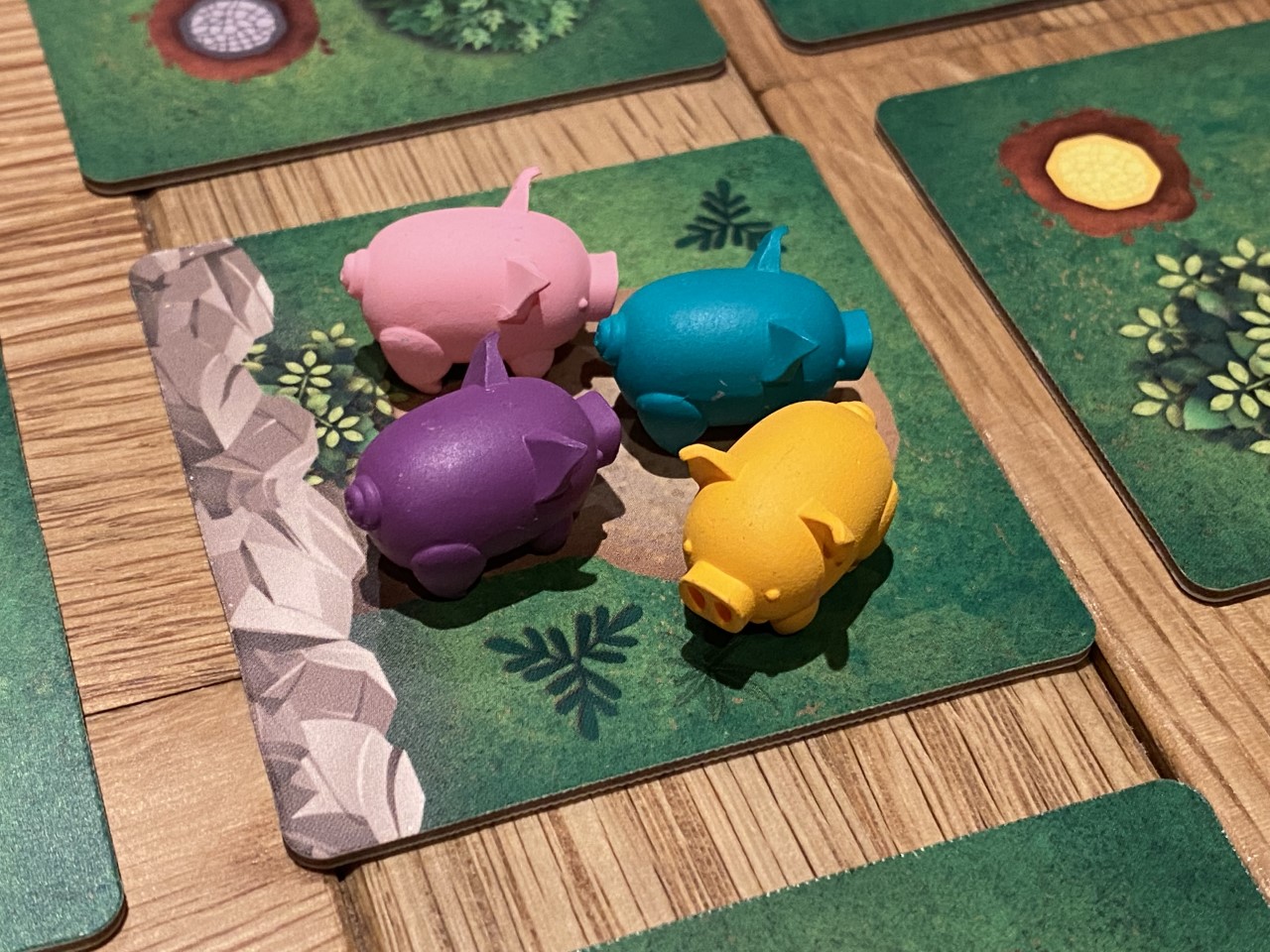 Super Truffle Pigs, from designer Jason Corace and publisher Games by Bicycle, is a simple enough idea. Each player must simply move the two pigs that match their colour around the map based on the number of actions available on their player board. The default is three actions, and players can upgrade to five over the course of the game.

What will they spend their actions on? Well, each move costs an action, but so too does digging up truffles – one for a basic mushroom, two for a slightly better one and three for the most precious and sought after fungi. One amusing part of this process is that “dig” attempts carry from turn to turn, so to show your progress, pigs will first jump onto a mushroom token (one dig) then tilt forwards (two) when required. 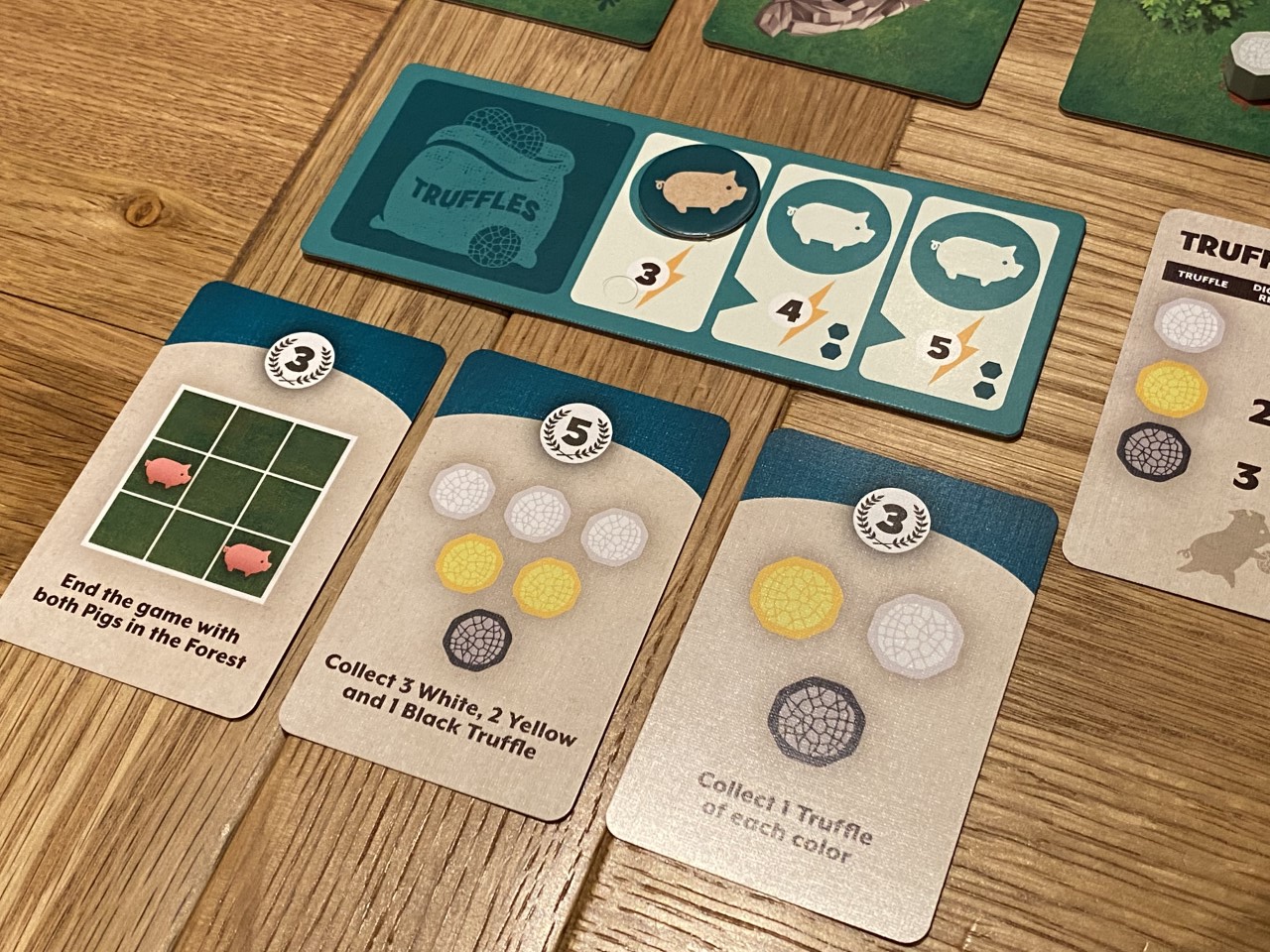 Each mushroom is worth a set number of points — which may be zero in the case of the basic mushrooms. Some have an S on them – allowing the players to upgrade their player boards as I mentioned above, and also to invest in one of the three Superpower cards displayed in a shared market. Most of these Superpowers are for immediate single use, offering a powerful move — or the chance to fight back against the wolves

Ah yes, it’s not all plain sailing. An ever-expanding pack of grey and brown wolves are hunting our pigs, spawning on the board and moving as a consequence of cards played by each player in secret at the beginning of a round. This means that each turn, you’ll need to consider your own objective — truffles — as well as the current known information (wolf locations, your own wolf card and wolf cards already played onto the wolf track) plus some aspect of unknown information: Cards played by others. 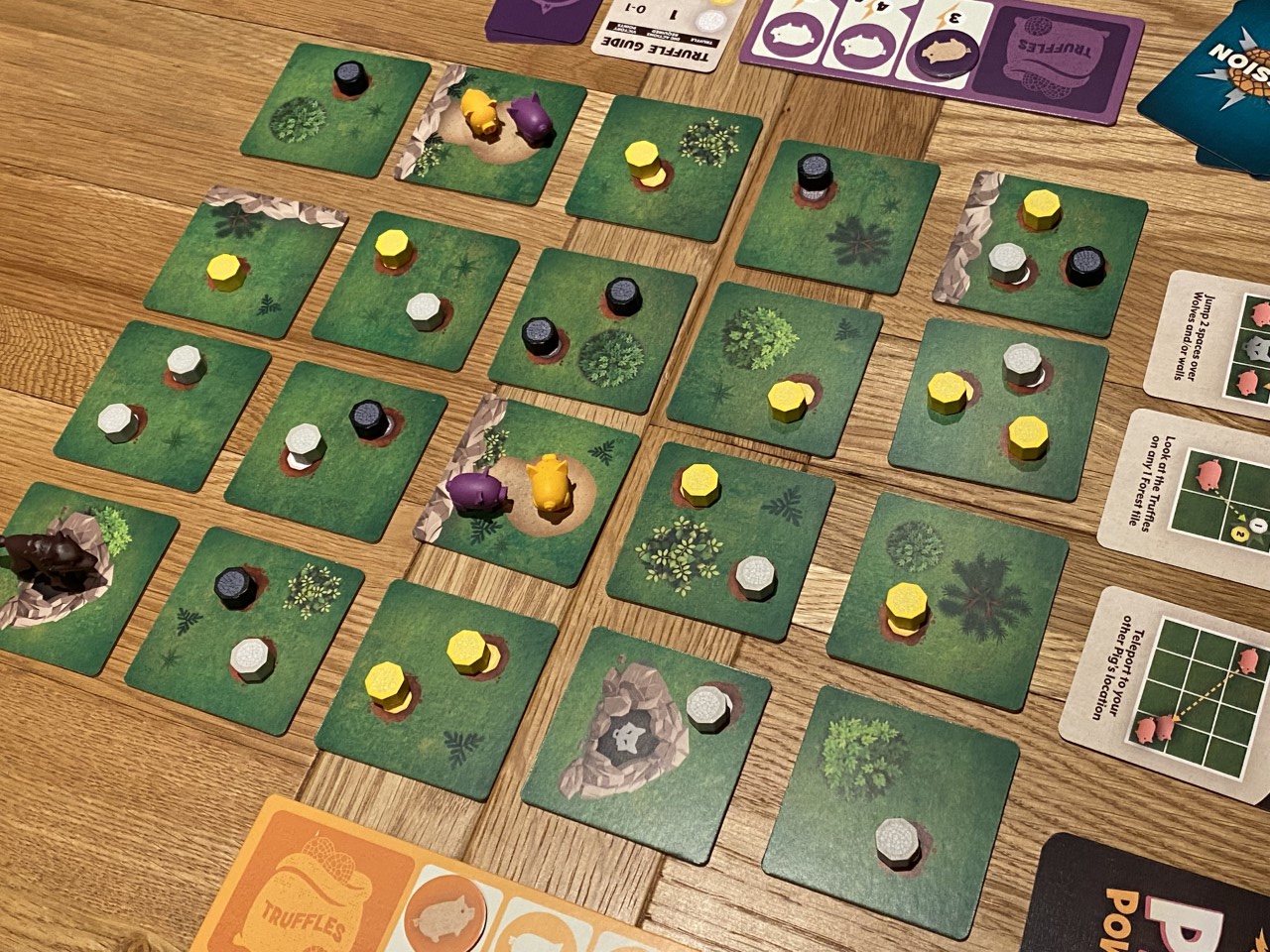 The downside for being caught by a wolf is severe — and the captured pig is simply removed from the game. Indeed, one of the game end triggers is when all pigs are removed, or when only one player has pigs (in which case they get to play out a turn.) We all know that player elimination is frowned upon these days, but here, eliminated players can still play their wolf cards and stay involved. That said, go out early in a multiplayer game and you’ll lose interest pretty quickly, because you won’t have the truffles to compete for top score…

The version of Super Truffle Pigs that was sent to me seems very nearly the complete article, to be honest. The pig and wolf miniatures are well done and very good quality, as is the card stock and artwork. Aside from just adding more content and possibly refining the rules a little bit, I could see this making a very nearly complete retail release. 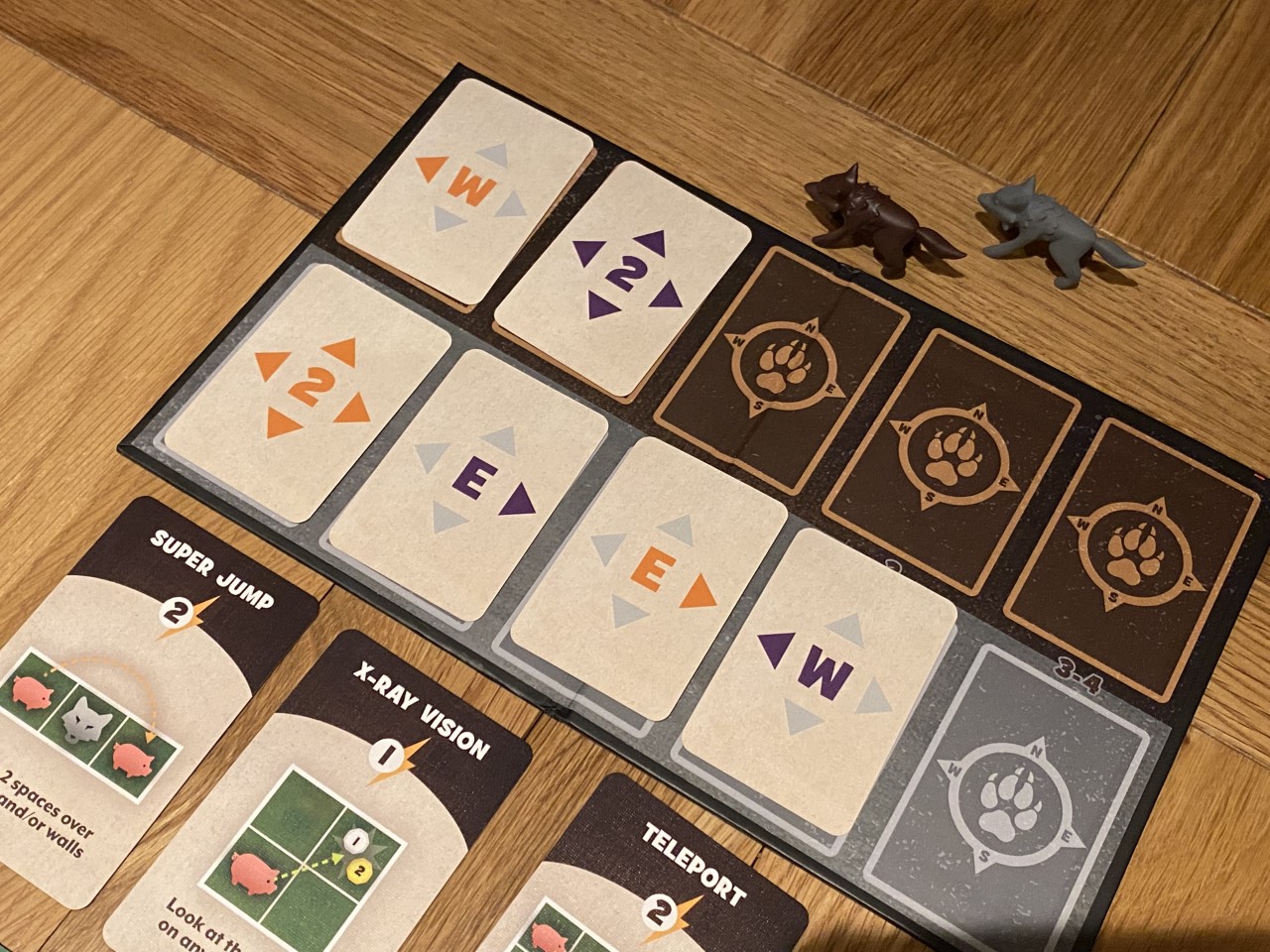 With all of that said, there’s one game that Super Truffle Pigs reminded me of, and that is Silk from Devir Games. Silk, however, is a much more convoluted and complex game, and what Super Truffle Pigs does really well is introduce several interlinking, skill based systems that combine in a straightforward way. Silk did the opposite — taking a simple worker placement and farming concept and making it really tough to explain.

Only time will tell how well Super Truffle Pigs compares, but I enjoyed playing this preview version quite a bit thanks to both its simplicity, and its exciting use of actions, gamebreaking powers and programming of the opposing wolves. It never takes too long to play, and aside from the elimination aspect (which is a pain for young players for sure) it has no obvious flaws. This is definitely one to watch over the next few months.