Frozen Unicorns is a Charming Idea, but it isn’t much of a game…

When it comes to choosing board and card games, I’m always on the lookout for options that might appeal to me, my wife and our kids equally. This is a heck of a challenge, and so far only the likes of Jurassic Snack and Zoo Run have managed it. Frozen Unicorns from Gamely Games is the latest addition to the collection, but so far, the reception has been pretty frosty.

Frozen Unicorns features a small box adorned with rainbow colours and images of the titular unicorns, locked into a variety of unusual postures and poses. Inside the box, players will find a simple instruction pamphlet, as well as two stacks of cards that can be further divided into cards described as easy, medium and hard. 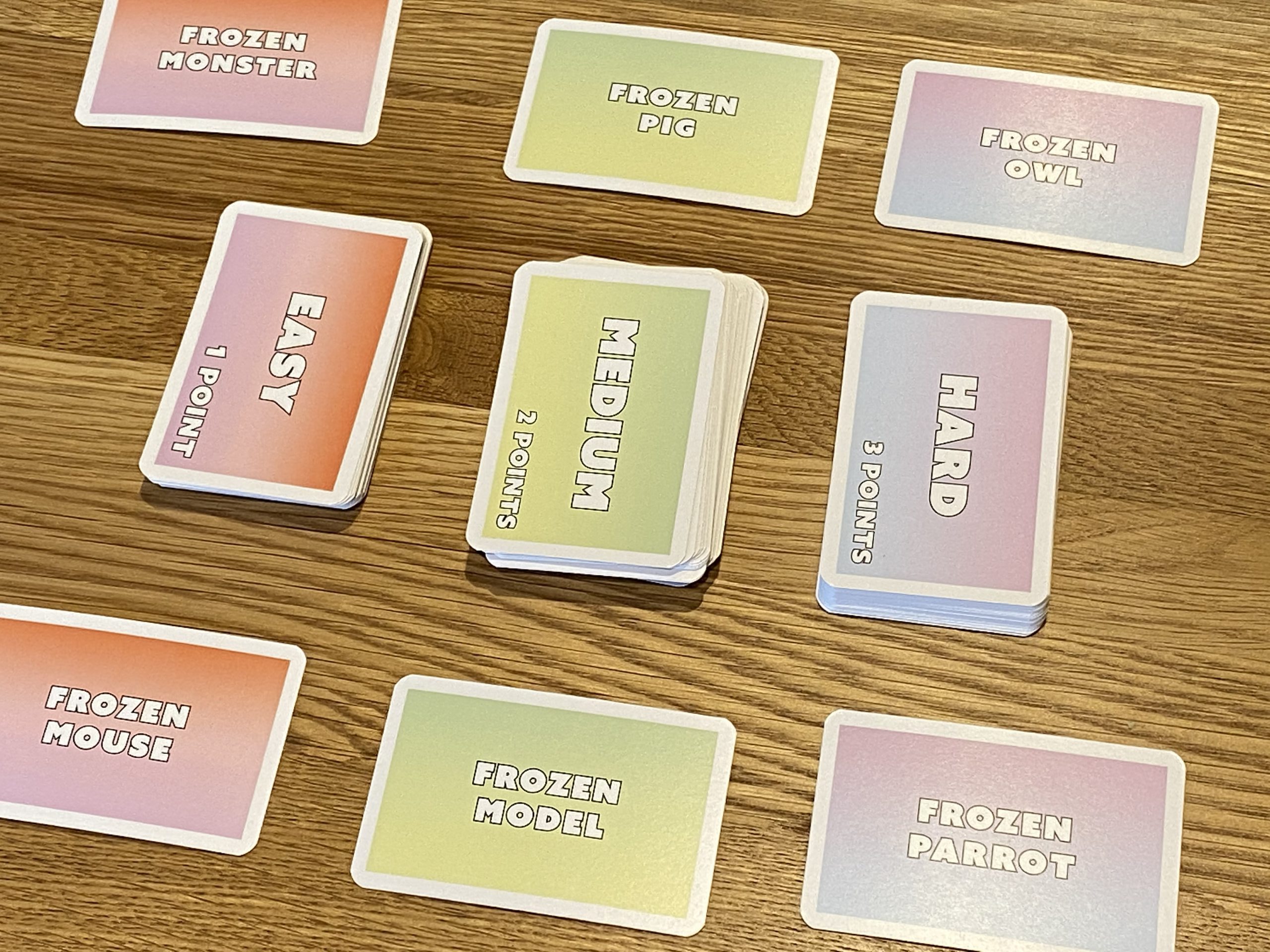 The aim of the game here is for all of the players but one to draw a card from one of the decks and to then strike a pose that represents whatever the card suggests. Should the player who is not striking a pose guess correctly, then they will be awarded points as shown on the card, as will the person striking the best pose.

Having played Frozen Unicorns with about eight different people of all ages, shapes and sizes from about three to forty years old, I can reasonably say that sadly, about half of what the box contains is just kind of useless. This is simply because the human body is only capable of so many different positions — meaning that there are many cards that are functionally identical.

Let me give you a few examples. The frozen alien, for example. How do you position your body as a frozen alien, specifically? What do aliens look like? Let’s assume you go for the classic little green man, or the slender, grey kind. Well each of those is just a humanoid shape with no “iconic” pose. 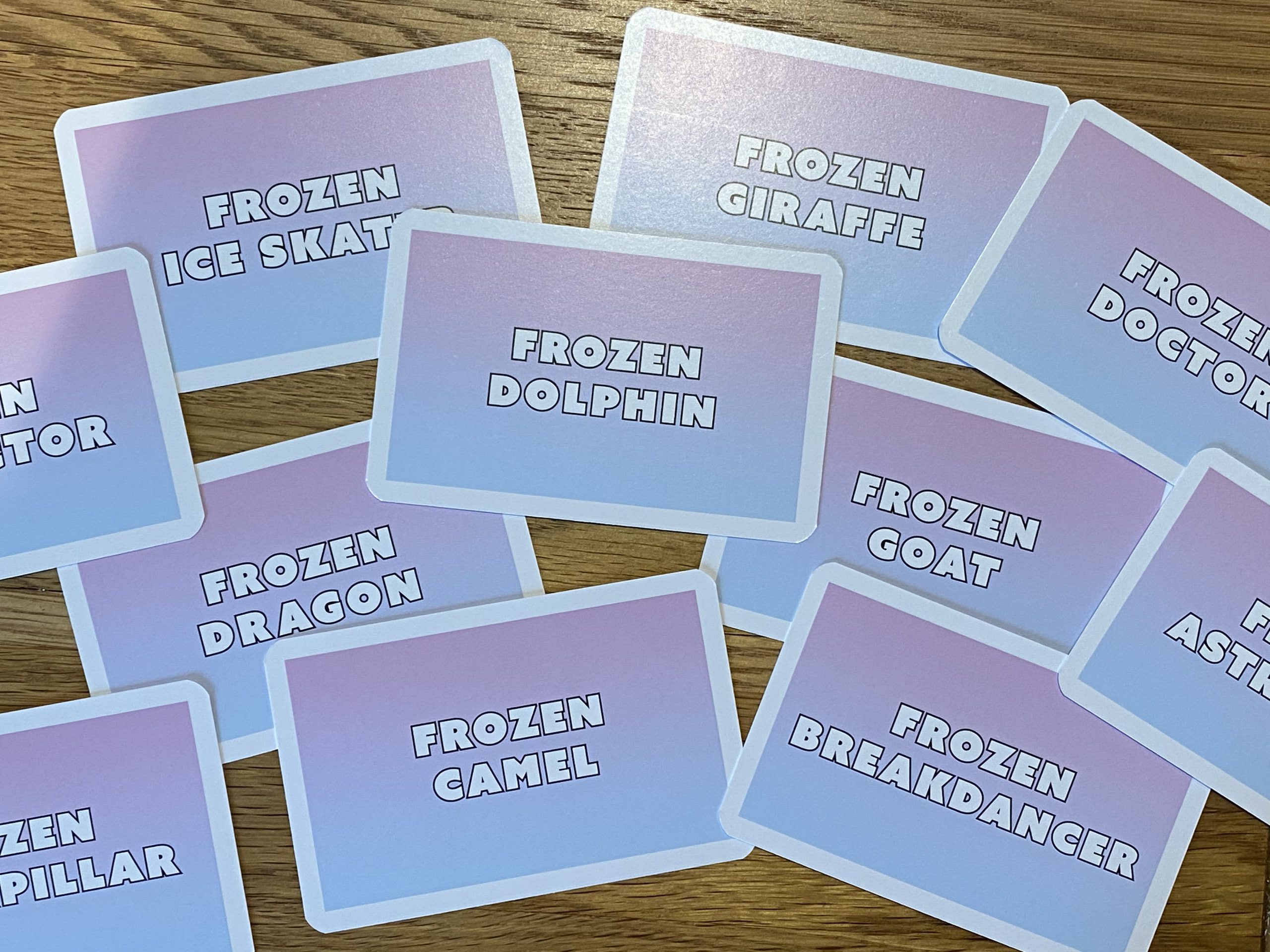 Others, of course, are easier — like the frozen dinosaur. Of course, because dinosaur is non-specific, most people seem to go for a T-Rex, but that clashes with a number of other choices in the deck and — ironically — seems to get mixed up with the frozen mouse on a lot of occasions.

Don’t get me wrong, there is some fun to be had here for younger kids, but don’t expect it to be much of a competitive game — more like a time-killing alternative to musical statues. The frozen ballerina, for example, is a fun and iconic shape that kids love to adopt and almost anyone can guess.

So, here you have a game that is hard to fit into any particular category. It probably works best for kids who are just at a reading age (because someone has to) but not so much for kids who are moving onto more complex and imaginative ideas. At the other end of the spectrum, it’s a harder sell for adult players, except those who have already had a fair bit to drink and are looking for a very silly party game. 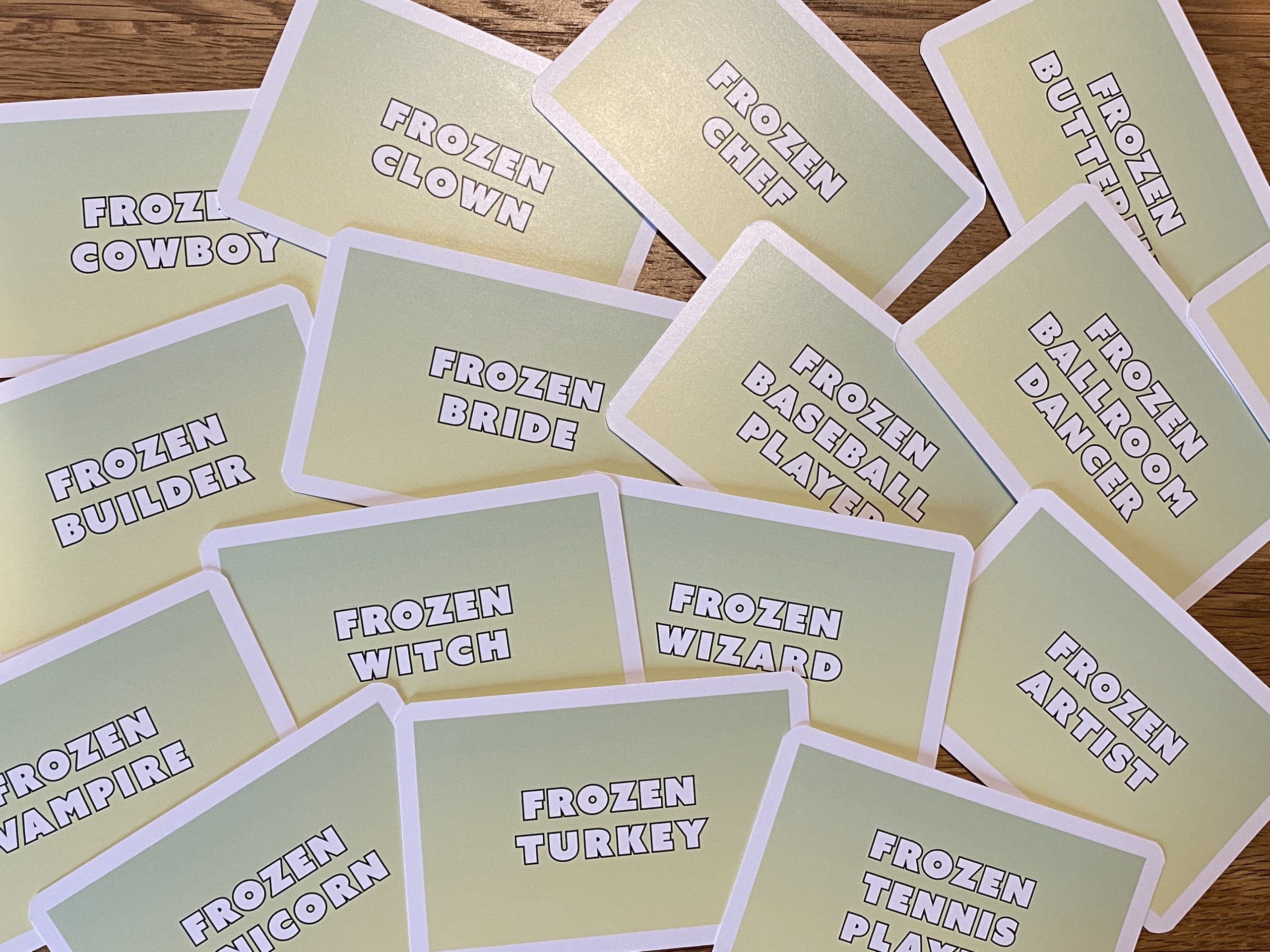 In summary then, I don’t dislike Frozen Unicorns, but I don’t really recommend it either. Frozen Unicorns benefits from being extremely straightforward and very cheap, but it is limited by several factors — the ability of its players to read (for young kids) or to adopt the required poses (for all players, but especially older ones) and so it often descends into a bit of a pointless mess.

There can often be games where four, five or six rounds in a row don’t benefit from a successful guess due to the nature of the cards drawn, and you’ll almost always lose the crowd when this happens. Equally, the “best fit” audience (young kids) will often need the card reading to them by an adult, and will then repeat it back loudly, letting the “guessing” player know the answer.

Frozen Unicorns is just a bit too messy to be considered a viable proposition in my view, and it isn’t a game that I am likely to keep in my collection. I’ll very likely hand it to the kids to keep in their own box of games, and if it does have one positive, it’s that it doesn’t “break” if you lose one or two of the cards, and I do think they’ll have some fun with it — even if not as the rules intend.

Frozen Unicorns can be purchased on Amazon.