Kite is a game that needs some work, but shows a whole lot of potential. This twin stick shooter is a real homage to the games of old with a lovely 8-bit art style and wonderfully detailed environments. One of the game’s strongest assets is it’s visual style and traversing the maps, avoiding heavy gunfire whilst using the highly destructible cover is a joy. So far the game’s main premise revolves around a robot uprising where evil machines have taken scientists captive and it’s your job to rescue them. It’s a pretty simple concept but is executed well.

Each level has the

same objectives but with increased difficulty throughout. You’ll have to save scientists, shut down generators and destroy turrets to make sure the area is secure and move onto the next one. There will usually be a unique obstacle to overcome in each level such as landmines or shielded turrets. This makes the combat nice and diverse when the game may threaten to become stale.

The amount of customisation is impressive too. After each level you’ll have the option to choose from a number of different body parts, each with their own unique buffers and perks. It also changes your appearance in the game! As well as a variety of different body parts to choose from you also have a large number of weapons to use, each specified to a particular set. You’ll have two sets of two weapons that can either be used simultaneously or combined to create a two handed weapon that deals massive damage. Each weapon has a different range and style so you can pick the one suited just for you.

As previously stated, the game does have a few weaknesses that should be easy to address with a quick fix. The sensitivity of the cursor is a 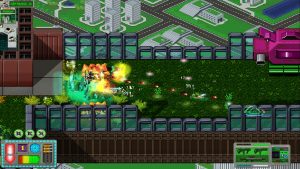 problem and your camera will tend to wander when speaking to characters. Another problem that I encountered quite a lot was getting lost. I think the game would be marginally improved if some kind of map was added to the game so you can easily find your way around and find new areas you haven’t discovered before.

Other than that I love the direction that Kite is headed. With highly destructible objects there’s no telling what the developer could hide in the game. Put in some truly terrific boss fights and polish up that camera a little bit and we’ve got a good little twin-stick shooter on our hands.