First Impressions | Way of the Red

If you’ve ever wanted to play as a small eagle who is a master swordsman, then Way of the Red is the game for you. Even though the game is still in Greenlight at this moment in time, I’ve been able to play a demo of the game and I’m very impressed with what I’ve seen so far. What grabbed me first was the art style, mixing wonderful colours and incredible detail that a quality game needs to possess, all topped off with a mesmerising soundtrack that is a joy to the ears. We have something truly special on our hands with this game.

One of the game’s biggest assets is the amazingly fun and satisfying combat system which can be utilised in different fashions. You
have your standard attacks on the ground but you can also execute aerial attacks when jumping which can give you the edge in fights. Another thing which I love about the game is how challenging it is. Loads of different enemies, all well designed and varied, are thrown at you from every direction and you’ll need to be quick on your feet to avoid damage and come out of a battle victorious. You’ll have to jump, glide and whack your way through hundreds of enemies and to advance, you’ll have to use all of your skill.

As well as being a game all about combat, there is also a platforming element for you to conquer too. In the game you will be able to glide over large gaps, climb up walls, and jump across narrow platforms. These sections are very tense and nail biting as there’s usually an instant death trap below you. One false move could send you spiralling back to the beginning of the section. 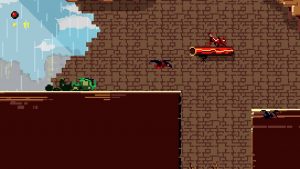 One thing which could be improved before the game ships out is the amount of checkpoints on offer and how they’re activated. Once in a while I’d be a bit frustrated when I died to be sent back all the way to the start of a particularly tricky section, especially when I’d accidentally miss a checkpoint because I fly over unknowingly.

Other than this, I can’t think of any other way this game can be improved. It looks gorgeous, the soundtrack is amazing, the combat is very fun and satisfying and there’s a number of well designed enemies for you to fight. I’m very interested to see where Way of the Red goes next, and I feel like if the developers added some great boss fights and some more environments to explore, then this game could be a great one.

For anybody reading this who likes the look of this game then you’ll be glad to know that this game comes out on Steam this year, yet an exact date is to be announced. From what I’ve played so far, Way of the Red is one to look forward to!