911 Operator is an emergency services management game by Jutsu Games. It focuses on the demanding task of directing and dispatching emergency services to the scene. The game offers up 2 different scenarios for the user to deal with, the first being events that pop up on the map at random, and the second being the calls that come in and require the user to choose from a series of options in order to diagnose what is happening, where it’s happening, and whether to allocate services to that scene.

It’s definitely an interesting idea, and visually it looks impressive too. The main view is that of the city map on which you are playing, and here’s a little nicety – you can choose from pretty much any location in the world! The developers have written an engine that takes map data from OpenStreetMaps and uses that to create the game zone. Clever.

Anyway, on top of this you can see your emergency service units and the paths that they are on. They just mill around a bit until you tell them where to go by selecting the unit and right-clicking on their destination. That unit then endeavours to traverse across the map in order to do your bidding. When a call comes in, it appears on the right of the screen – you click on the options to find out more about the caller, and make decisions based on their response to your questions.

There is a clock that tells you the time, and after each day of service you are given a statistics screen that tells you how well you performed, gives you money based on successfully resolved events, and subtracts wages etc. You can then spend your resulting cash in the shop to buy more units, people, equipment etc.

So far so good. However, all is not as great as it may seem… I have a number of issues with this game, and to be fair – they may all be resolved in upcoming releases, as this is still an early alpha – but I need to mention them here nonetheless…

The UI is bad. Not completely terrible, but it’s hard to tell exactly what is going on most of the time… It might be pretty to look at, but when you come down to wanting to know which units are doing what, it can be extremely difficult to make out. This could very easily be aided by changing the border colour around a unit – maybe make it and the path that they are travelling green if they are on-route to an incident.

Oh, and they drive very slowly… very, very slowly… I don’t know about you, but I’m pretty sure that I can get from one side of a small town to the other within a few hours – not so the “emergency” services in this game! Also, their path planning is atrocious! Sometimes they make massive diversions for absolutely no apparent reason! I thought that maybe they were obeying the rules of the road in whatever city I was playing in, so I fired up a local city that I know very well, and they still wandered all over the place. Slowly.

And when the units do eventually get to a location they all stack up on top of each other, resulting in more confusion as to which units are there, and there is no way to tell if they need any additional help. A simple UI change would make a massive improvement in this regard: 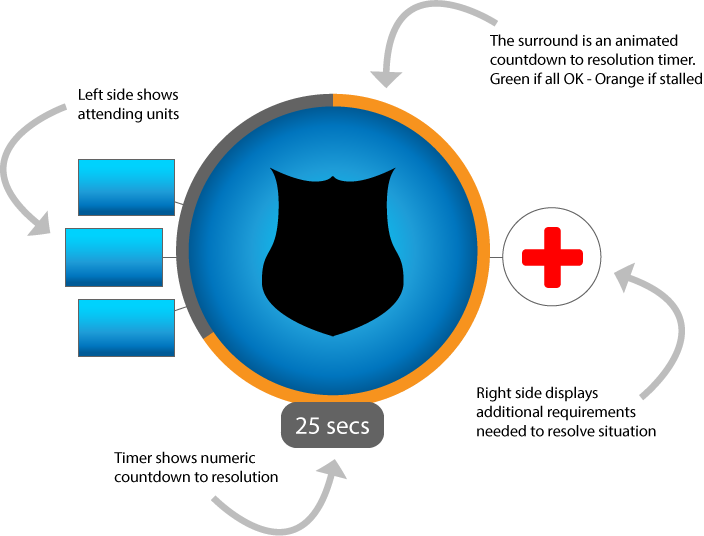 Having multiple units at an incident wouldn’t be so bad, if they would actually deal with the situation when they arrived. They take an incredibly long time to complete an event, so when you have, say, a car collision reported that has injured civilians and cars blocking the road, you have to send one of each service to deal with it – those units are then tied up and cannot go anywhere else until they have finished their part of it, but only as long as there is still a unit there to handle the next bit. So in my example above, you could get a helicopter arrive quickly (as it doesn’t use the roads – thank God!), but it has to stay there until a fire engine or police car arrives!

All this adds up to mean that situations are not dealt with very efficiently, and consequently you end up missing other events entirely, seeing as the game fires them at you think and fast. The whole thing is very manic, and rather frustrating.

Overall I think that this game has a lot of potential, it just needs additional development and ideally some UI tweaks in order to be something far, far more enjoyable to play.