Family Man is a gritty game about moral choices

It would be hard to tell if you simply walked past someone playing Family Man, by Broken Bear Games, if they were just playing a Minecraft mod, but the game shares only the voxel graphic style in likeness. Family Man puts you in a world where moral dilemmas are normal and guns and violence are commonplace.

Family Man starts with you being fired from your job. You make plans to meet up with a friend at the shooting range to let off some steam. When you get there, he’s nowhere to be found, but you decide to fire a couple of rounds into a target anyway while you wait for him. It turns out that was a horrible choice, as the whole shooting range thing was a set-up by the mob and you were firing through the target into a room behind it, where the friend you were supposed to meet was tied to a chair.

Now an accessory to murder, you are forced to dive deeper into a dark world of favors and decisions. Will you fall further into sin or try desperately to clear yourself while providing for your family?

My demo at PAX South started from the very beginning of the game, pushing me through the tough reality of what my character had done, and ultimately what the game forced me to do. I felt oddly betrayed, the way I did in BioShock when I found out I was being tugged at like a puppet to do another’s bidding. It’s a tough pill to swallow, and the game delights in having you pick the tough choice, sometimes against your own personal will. You also have this constant and literal ticking reminder to tuck your son in at night, and a visual representation of how much money you need to keep your family fed. It hits a bit too close to home at times, but it’s as real of a video game imitating the harsh realities of life that I’ve seen. 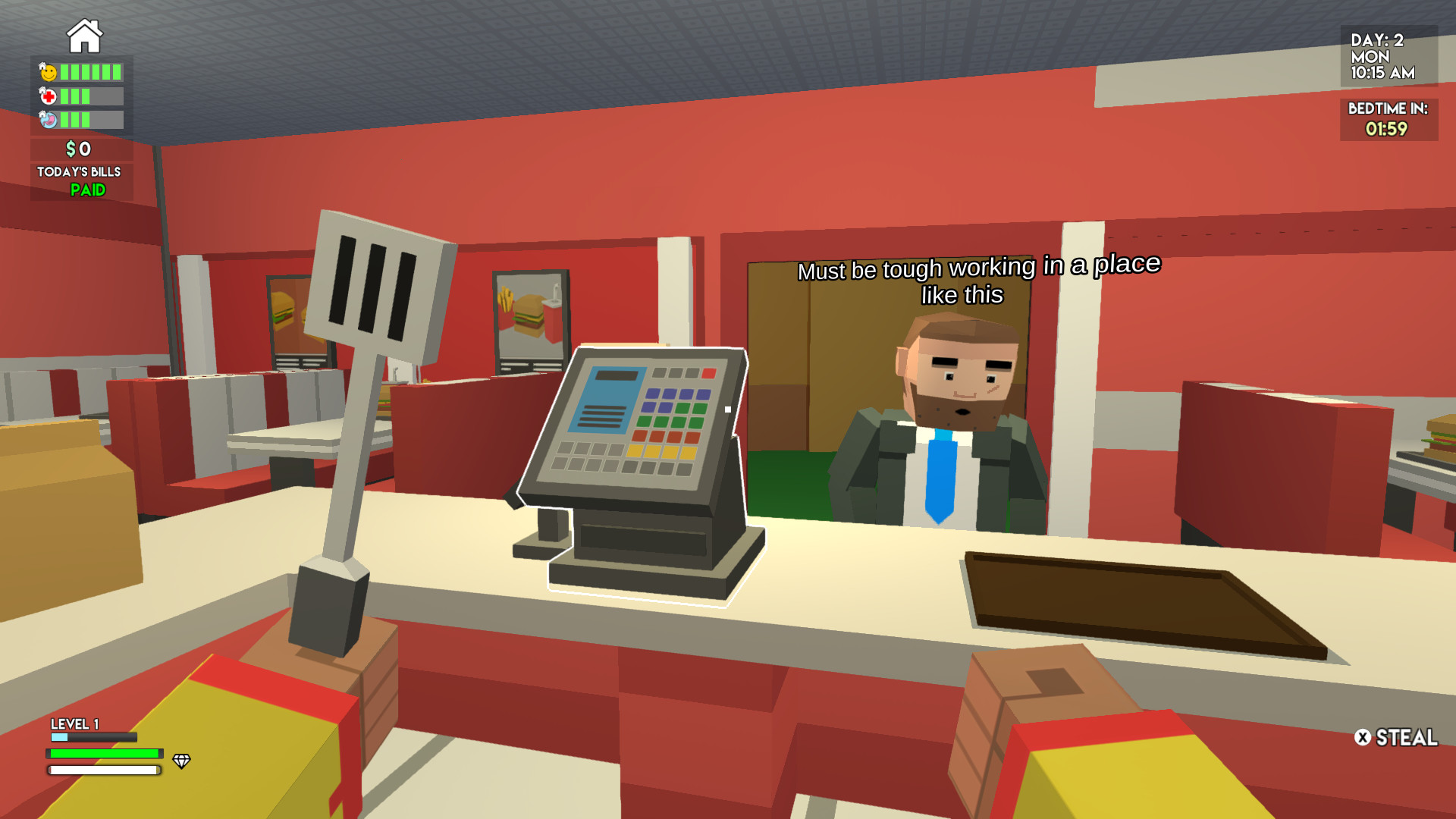 You have free roam of the town and surrounding areas, which makes it true to the game’s RPG nature, but with the constant necessity of fulfilling your duties as a father and a husband, you’ll find yourself doing odd-jobs here and there to make ends meet. A local fast food restaurant will hire you and the hiring manager will even pay you extra to mess with people’s food. A farmer in town is looking for some help with exterminating rabbits that are getting into his garden, but he’ll pay money for the task. Various other odds and ends exist as well, but that’s all I got around to doing in the demo.

As I mentioned before, the graphics will certainly remind you of Minecraft, but it almost adds an ironic tinge to the game, seeing such colorful, simple shapes and characters when a dire desperation permeates every square inch of this world as the weight of your new life bears down on you.

Family Man is coming out in early 2019. Wishlist it on Steam or check them out on Twitter for more information.