Eonia, a sweet treat in a hard shell

EONIA is a world of interest and weirdness. You set out, tasked to explore the world, learn new skills and document the various wild creatures of the world. 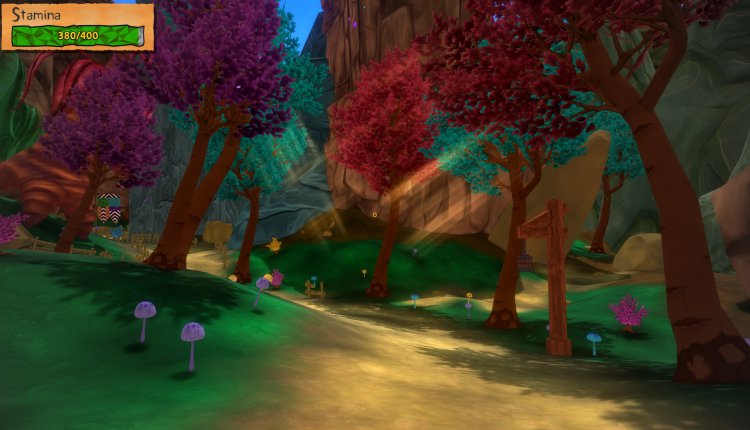 It’s the same old story, you wake up on the morn of your ascension from lowly student of a wise old magician, to lowly magician! Except oh noes! Your master has left you with instructions to come find him, and also yourself, along the way!

The tutorial is pretty well put together so far, with quests popping up as and when needed. Early on in my adventure, I stumbled upon a cart crashed in the middle of a path, my inner monologue wondered what happened with it and I got a quest to find out. Sprinting too fast, I ran out of stamina, and got a quest to brew a stamina regaining potion.

If I had to pick one word to describe EONIA‘s look, it would be vibrant.  The world is extremely colourful, the rock is red and dusty, rivers of deep blue flow, all while patches of green light up the otherwise ochre landscape. The animals have a very interesting design style, looking like they jumped right out a child’s picture book, complete with their bright colours and intense style.

One of your first quests is to document some of the fauna of the land of EONIA. You accomplish this by pointing your telescope at it, then drawing it in one of your books. Interestingly, to draw an animal you need a book with the entry for that animal, so several animals cannot be drawn early on in your adventure.

The quests are quite interesting, slowly baiting you out further and further into the vibrant world, more and more steps stretching out beyond you.

For example, one early quest I had was to draw a baby bird that was roosted in a nest close to a river. Sadly my presence scared the bird, so to get it to come back I had to feed it some crab. Collecting a crab entailed sailing to an island to fish; going to another fishing spot along the coast of the river to learn how to fish; collecting a beetle to drive away a terrifying plant so I could gain access to a construction site to learn how to build a scarecrow; collecting the ingredients for the scarecrow; building the scarecrow to draw the crab so I could fish for it at the first fishing spot; then collecting the ingredients for catching the okun fish to use as bait to catch the crab (10 minute wait timers on both of those fishings). Phew.

Sticking it in the bird nest brought the bird back, allowing me to draw it as it came to feed. This mission took many hours to complete, had me running back and forth across the valley a dozen times, while completing around 3 quests. I explored the map vigourously on my journey, poking my head into every little corner to see what was there, this meant that the quest took a long time, especially considering that it is in the prologue.

Overall, excluding restarting the game due to an update, EONIA‘s prologue took me 15 hours to play through. A RPG with as such a heavy exploration focus is certainly admirable and interesting, but at least for me, too much of the game was wondering about trying to find the random unlabelled item to use in the next step. For myself, the only way I completed the game without tearing my hair out was by talking with the dev many times with all sorts of questions about the game (thanks!) For the most part though, EONIA was a lovely stroll through a fairytale world, and I can’t wait to see what happens later into the alpha, especially as the developer adds more content, creatures, and guidance.

EONIA is available now in Steam Early Access, and through Itch.io, for the PC.