This dimension-flipping game will twist your brain in ways you may not have experienced before, and that’s part of what makes Dimension Drive a fresh, fun new take on shoot-’em-ups.

I can’t talk about Dimension Drive without first mentioning the color-switching shooter Ikaruga. In Ikaruga, you have to switch back and forth between a black and white ship to both fire your ship’s color of bullets at the enemies (opposite colors do more damage) and defend against the enemy black and white ship’s bullets (opposite color instantly kills you). This frantic switching back and forth, and worrying about both the damage you are taking and dealing, is what makes Ikaruga such a challenging shooter, and why many consider it to be the penultimate challenge in the shoot-’em-up genre. In Dimension Drive, you do flip back and forth, but from one side of the screen to the other, and that is what makes a world of difference.

The dimension flipping mechanics are what, naturally, the game is all about, and after a quick tutorial screen to teach you the basics of using fire and switch buttons, you are free to jump right into the first level by yourself — or with a co-op partner — and test them out. As you progress through each (vertical scrolling) level, you will come across waves of enemy ships and environmental obstacles that will bear down on you, and each side of the screen offers its own challenges. Sometimes the environmental objects are positioned to keep you looking at both sides, because if you warp over to the other side on top of an object, you’ll blow up and lose a life. Dimension Drive is difficult, but mostly in what it asks you to do: split your brain in two halves and concentrate on multiple obstacles at once. 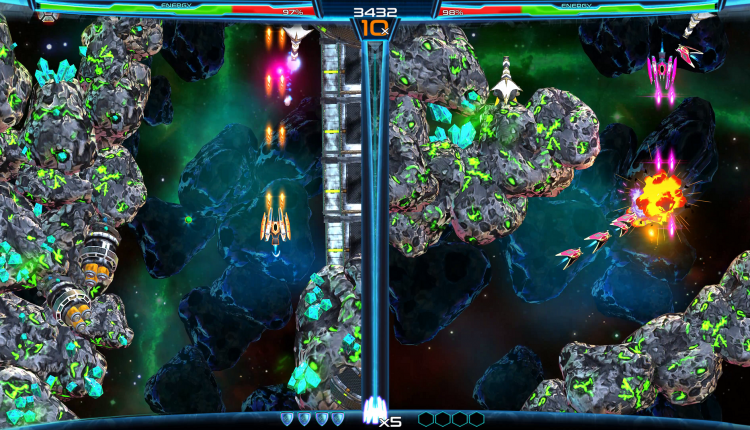 One of the ways Dimension Drive keeps you from playing the whole level on the one side of the screen is energy. When firing, you exhaust energy, and unless you collect some of the green energy pick-ups (sparingly) dropped by enemies, you will run out and no longer be able to fire. Switching over to the other dimension will let you use that ship’s energy and your other side’s energy will automatically refill. It’s a neat feature that keeps gameplay lively and ultimately stops you from cheating the dimension-swapping system by just playing on the one screen.

There are a few power-ups along your way that will help you in your battles: what the game simply references to as a ‘power-up’ (which allows you to shoot 4 bullet streams instead of your standard two) and shields. Shields are basically what keeps your ship from instantly blowing up after being hit by an enemy’s bullet, and you can collect up to 4 at a time. Additional items found in harder to reach places are ‘data cubes’, which you can use to unlock additional weapons for your ship. 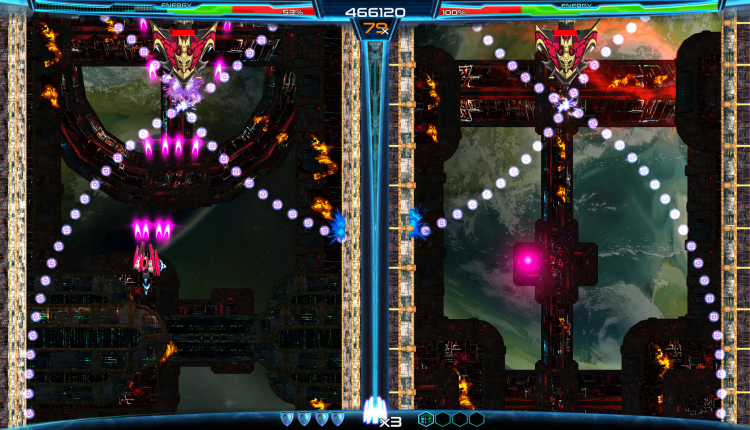 The bosses are where Dimension Drive really shines. Which the addition of needing to swap back and forth between screens, the game takes some liberties in what it requires you to do to avoid the heavy fire coming from the boss. If on one screen it is firing on the left side, you’ll be safe on the right side of the screen in the other dimension and visa versa. It sounds like it would get old fast, but each boss feels unique, utilizes the mechanics wisely and doesn’t feel forced or lacking in challenge.

The art of the game definitely looks its best in the cutscenes, as it trades in the 3D graphics for gorgeously hand-painted characters and scenes. Within the game, the enemies aren’t really memorable and the design is somewhat lacking in the creative department, but it gets the job done. The backgrounds and set pieces also aren’t really well defined, but honestly, it’s hard to complain when you barely have time to look at it all — between all the swapping, shooting and dodging. The story also isn’t anything particular other than typical sci-fi fare, but it serves itself well to a game genre that doesn’t really need a story to begin with, and for that, it deserves some extra points. 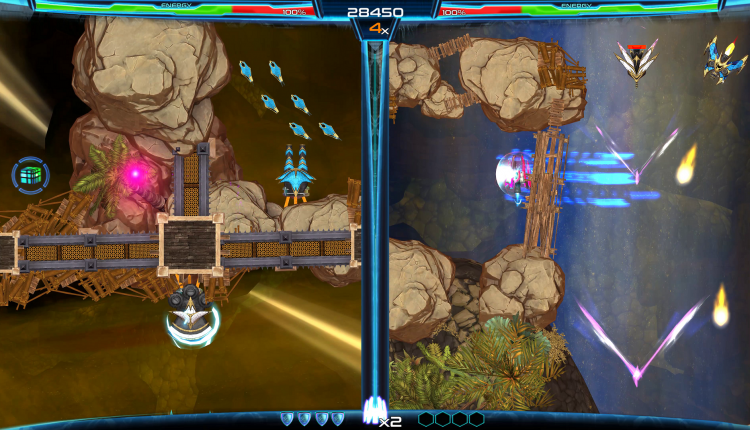 As a fan of the shoot-’em-up genre, Dimension Drive is a breath of fresh air to experience such a unique take on the concept. It’s beautiful character art helps define the story and the gameplay stays fresh to the very end. It’s not terribly hard for a newcomer to the genre, but it’s certainly worth checking out if you like top-down space shooters.

Dimension Drive is available now for the Nintendo Switch, Xbox One, Playstation 4 and on Steam.