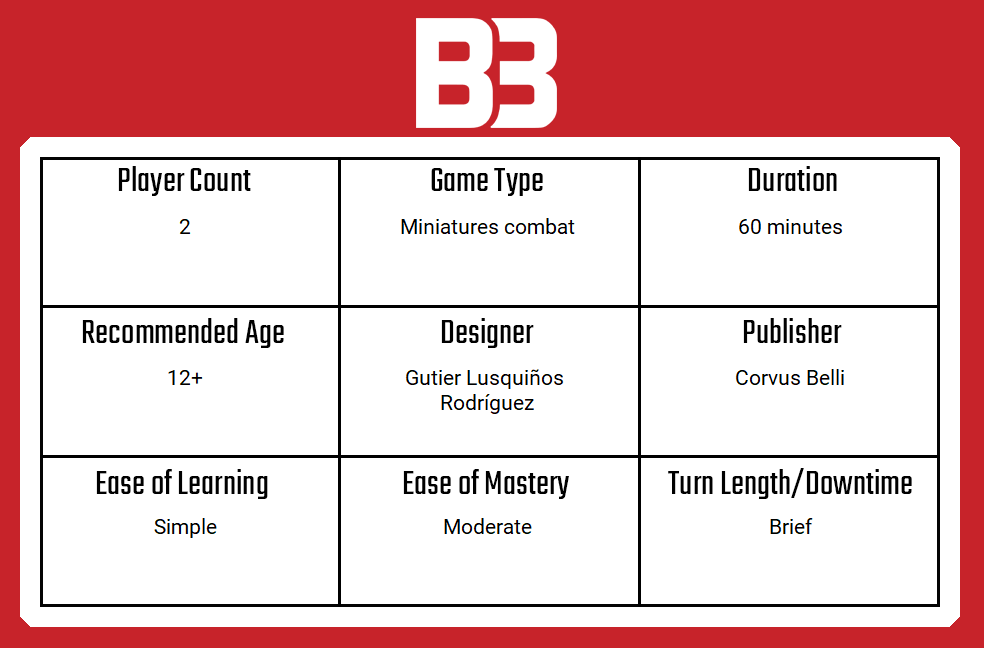 Whilst Games Workshop have been attempting to address the sprawling and ever more confusing catalogue of products that exist in their expansive world, the Infinity series from Corvus Belli has been quietly claiming market share with exceptional minis and solid, straightforward gameplay. Infinity: Operation Coldfront is the most recent two-player boxed set to be released and it features everything new players need to immerse themselves in this compelling universe, including rules, miniatures, tokens and even, unusually, scenery. 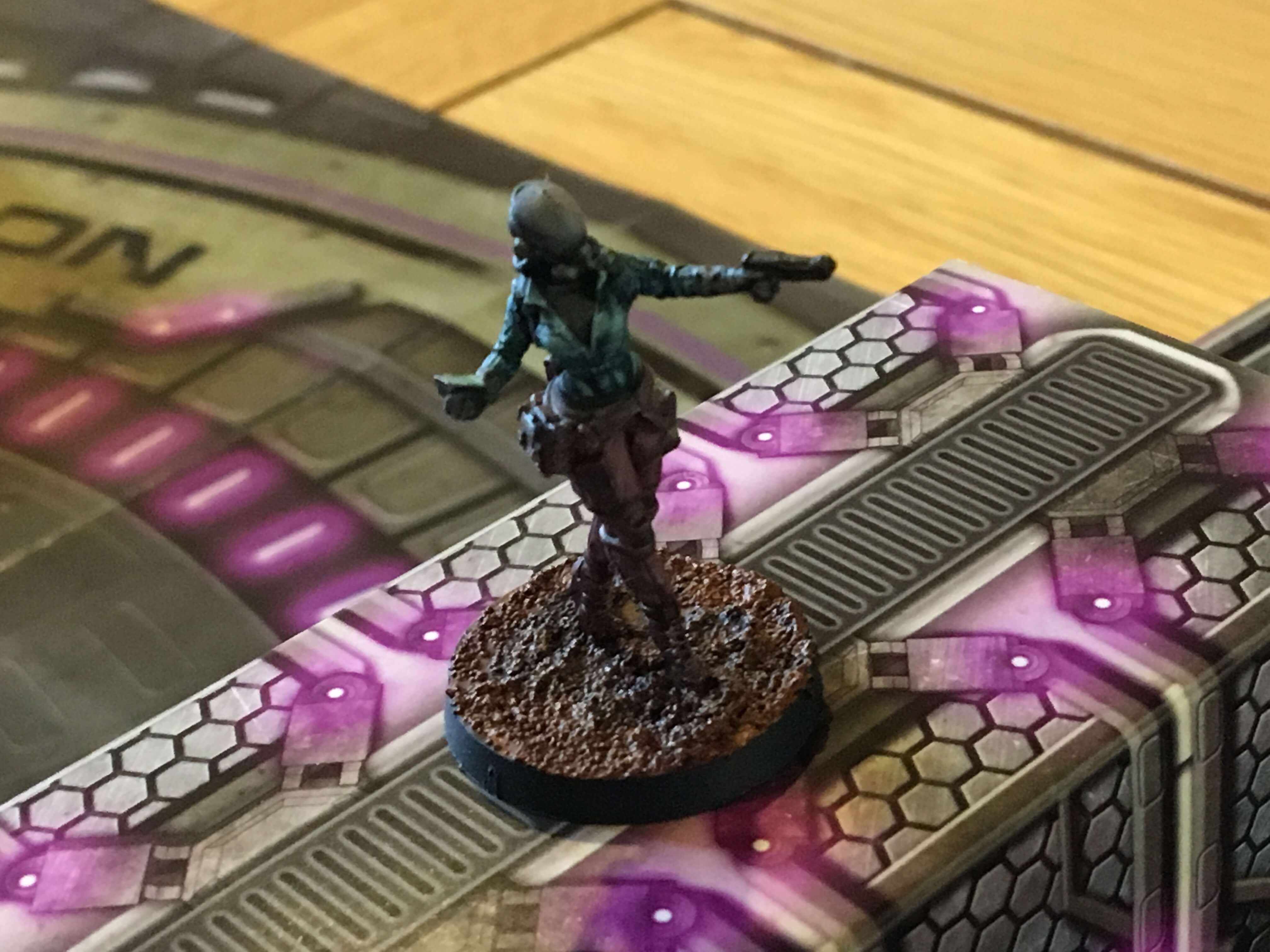 Comprising of a series of tutorial missions which steadily introduce more characters, new rules and additional concepts, Operation Coldfront depicts a campaign-style conflict between the rather rustic, traditionalist forces of the Ariadna and the cybernetically enhanced, AI-controlled ALEPH. Like almost everything in Infinity, the battle is focused on the ongoing struggle for resources, power, weaponry and suchlike — the desperate Ariadna are both the aggressors and, I’d say, the underdogs.

Of course, whilst Operation Coldfront is a standalone box set in its own right, it’s also intended as an introduction to the wider Infinity world. There are seven miniatures on each side, including one for each faction that can only be obtained within Operation Coldfront. On the Ariadna side, the force is comprised of three Line Kazaks, one Tankhunter, one Veteran Kazak, one Ariadna Scout and one Ratnik Battle Suit. For the ALEPH, there are three Dakini Tac-bots, one Shukra Consultant, one Yadu Trooper, one Deva Functionary and one Nagas. Now, if none of that means much to you, that’s OK — the purpose of Operation Coldfront is to introduce you to what makes each of these units special, one mission at a time.

As a skirmish-level miniatures game, Infinity is played on a roughly three-foot-square battlefield. Instead of using spaces on a board to control movement, players must measure the distance their units move or shoot with either a tape measure or one of the included cardboard measuring sticks. Factors like line of sight, cover, camouflage and similar can all affect a unit’s ability to move, shoot or indeed be shot at. Evasion is also a factor in Infinity, but again, Operation Coldfront is all about introducing these rules slowly enough to ensure players can get to grips with them. 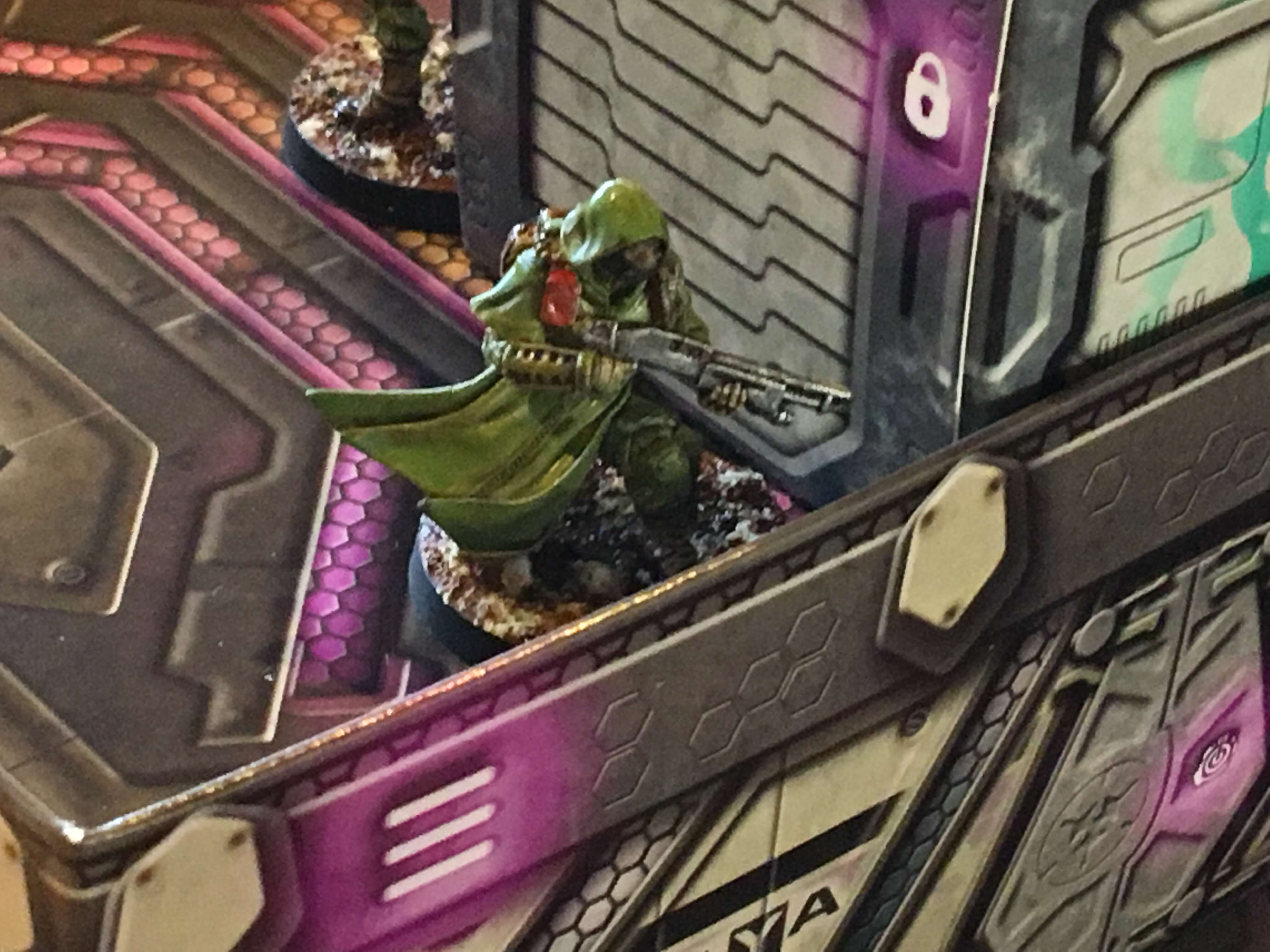 When it comes to the quality of what’s in the box, Corvus Belli pull no punches with Operation Coldfront, which is pretty normal for them. The fourteen miniatures (or fifteen, if you buy the initial printing that comes with one bonus mini, which I won’t describe here since it doesn’t strictly pertain to Operation Coldfront) are incredibly well made and come in a range of exciting postures. The quality of Corvus Belli’s metal miniatures is such that some of the stances would be impossible for plastic minis, but there are no balancing issues or similar here.

I should mention that all Infinity miniatures require a degree of assembly and preparation. As you’ll see in the photos throughout this review, mine have been painted to an excellent standard by a professional whose details I’ll include at the end of this article, but before I shipped them to him, I was able to prep and assemble a number of them myself. Being of metal construction, there’s arguably less to do with Infinity miniatures than I remember from my days playing with plastic Warhammer minis as a child, so I’d be willing to suggest that Infinity makes for a good entry-level minis game.

In addition to the miniatures, there are several other things that make Operation Coldfront very impressive. Firstly, it’s the only boxed miniatures game I know of that contains a full set of detailed, cardboard scenery and a full-sized, thematic playmat. One of the key reasons we avoid reviewing miniatures games at Big Boss Battle is because they rarely provide everything players need within a single box and it is for exactly the opposite reason that I was so excited to cover Operation Coldfront. Honestly, with painted miniatures and the scenery all set up, this is a superb-looking game that is truly three dimensional.

The manual is also very good. It reads in English from the front to about halfway through and then in Spanish from the back coming the other way. The quality of the rules, including supporting tables and example text, is superb and it left me in no doubt about how to play the game. The scenarios it describes build upon one another, so each one only contains new, iterative content, which keeps things appropriately brief. Fantastic artwork fills blank space and further immerses the players into what looks like a very compelling world that I, at least, want to know more about.

Finally, on the slightly negative side, are the cardboard tokens and pieces that show orders, range measurements, areas of effect and so on, which are all made from very thin cardboard. These pieces feel collectively cheap and flimsy, with a high likelihood of tearing after a few plays. 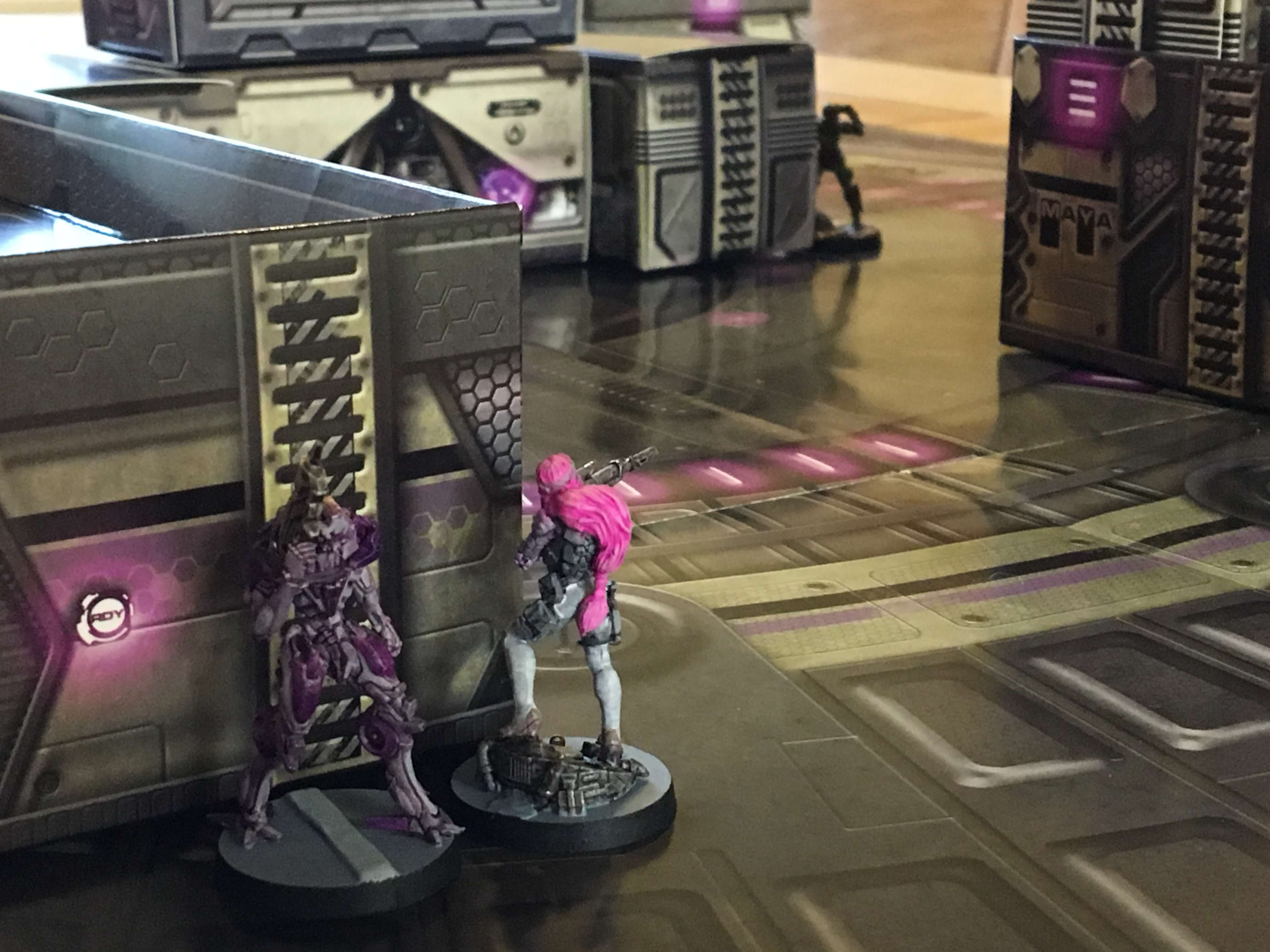 Following a relatively straightforward deployment which begins with the player who is determined to have initiative, the players each check how many of their soldiers are still alive (in Operation Coldfront, that will be anywhere between three and seven at the beginning of the match),receiving one order token for each. If any of the soldiers are considered to be Lieutenants, they receive an extra order token. One of the fairly unique features of Infinity is that you can spend more than one order on each trooper, enabling some very bold and unique strategies.

When you spend an order on a particular trooper, there are essentially four options available to it. It can move twice, move and shoot, move and engage in close combat or move and dodge. After you declare the first half of the order, any opposing soldier with line of sight (or that would be in close combat range at the end of the move) may respond with an ARO, or Automatic Response Order. This is usually either to fire a shot at the moving enemy, engage them in close combat or perform a dodge, if a shot is headed their way and it seems like there’s little chance of effective return fire.

Whenever combat is being decided, players roll a D20 against the modified ballistic skill of the character firing the weapon. Usually, this is a one-sided roll where the player must roll as low as possible, with a one being a natural critical hit. Factors like range and cover add negative modifiers to the roll, which obviously reduce the chance of a hit. On some occasions, like in close combat or when an opponent under fire dodges, a face-to-face roll will occur. When this happens, the two soldiers roll against their own modified abilities (like ballistic skill and agility) to determine the outcome.

Structurally, each player resolves all their actions before handing over to the other player, which initially felt like it would be quite one-sided to me. I was wrong, though, because ARO attacks are automatic (you don’t need to ‘set’ them), so any attacker spending a lot of actions to throw their soldiers into the line of fire will be doing just that — which can backfire dramatically. The presence of plenty of ARO attacks really increases interaction, to the extent that turns don’t really feel as if they are one-sided. Orders executed with no possible ARO attack or shot fired tend to last about ten seconds anyway, so even if that happens for four or five soldiers on one side, the whole turn will pass (or at least get into the action) relatively quickly. 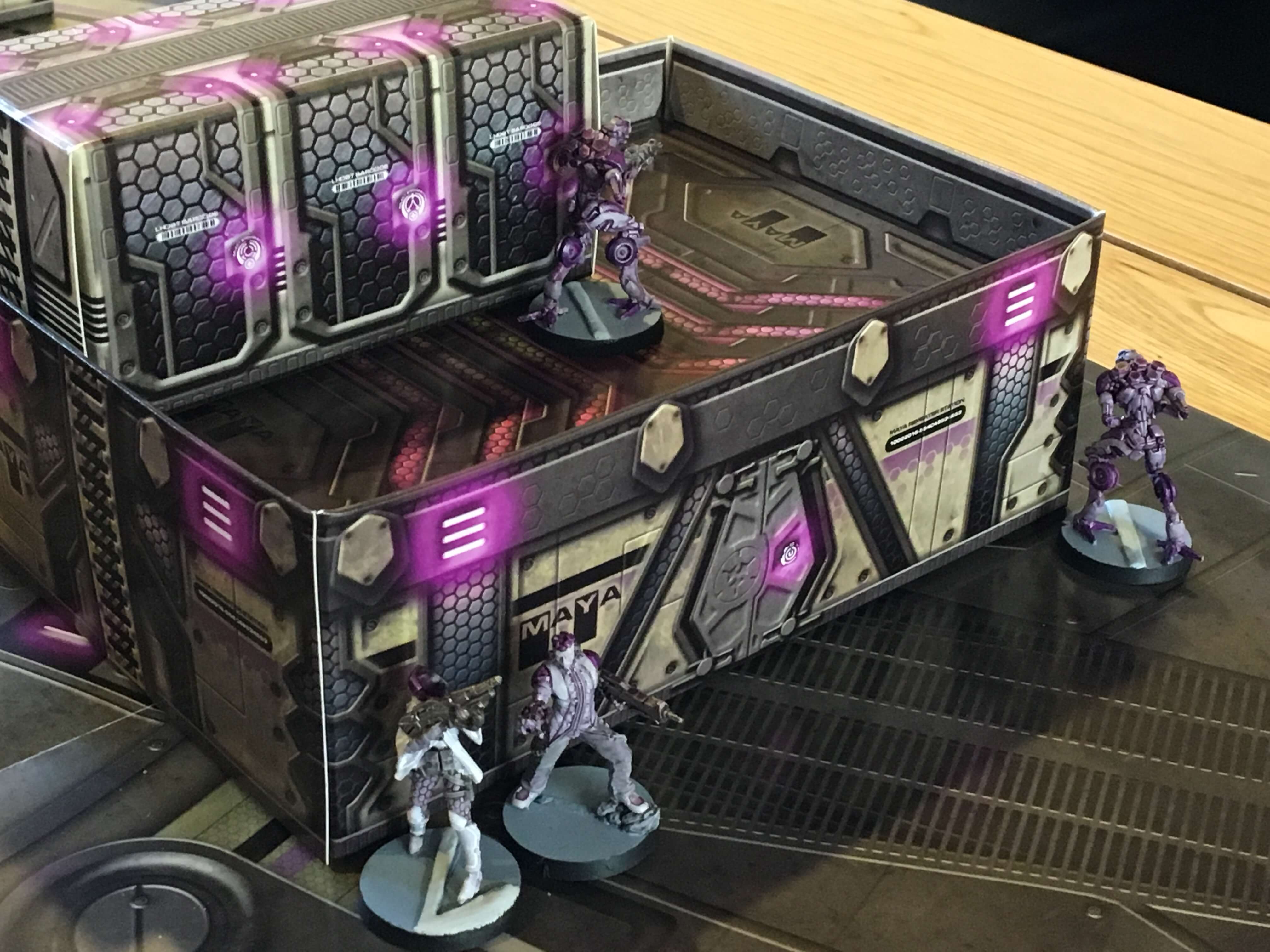 I realise that I am only scratching the surface of the Infinity universe when I discuss Operation Coldfront, so I am kind of reviewing it as a standalone product, but I also have one eye on the fact that this is a world in which there are already several other factions, hundreds of other minis and quite a few pre-designed ways to expand upon the basic set. In a nutshell, Operation Coldfront is the most complete, single-box, skirmish-level miniatures game I have ever played. Fact. It’s very, very unusual in my experience to have everything you need included, especially scenery — the importance of which cannot be understated.

The play mat and all of the crates and platforms included in Operation Coldfront are really well made, but still fold down flat and back into the original box after use. The manual, too, is excellent, but all of it pales in comparison to the miniatures, which are some of the best I’ve ever seen. The detail they present at 28 mm scale is just incredible. When painted and placed on the board, the presence that Operation Coldfront brings is exceptional. At a component level, only the cardboard bits and pieces let it down slightly.

None of the presentation would matter, really, were it not for the fact that the game is also very, very good. The order system is fast, fluid and flexible, allowing for a myriad of different strategies and approaches, as well as for just enough chance that plans can go in ways you don’t expect them, but never unfairly so. The base rules for movement and combat are very simple and whilst weapons and other abilities do layer in additional complexities through new and improved units, I never felt overwhelmed with complexity or rules that didn’t make sense. Having a printed reference sheet for each set of troops was all we needed to play, following a brief introductory game. 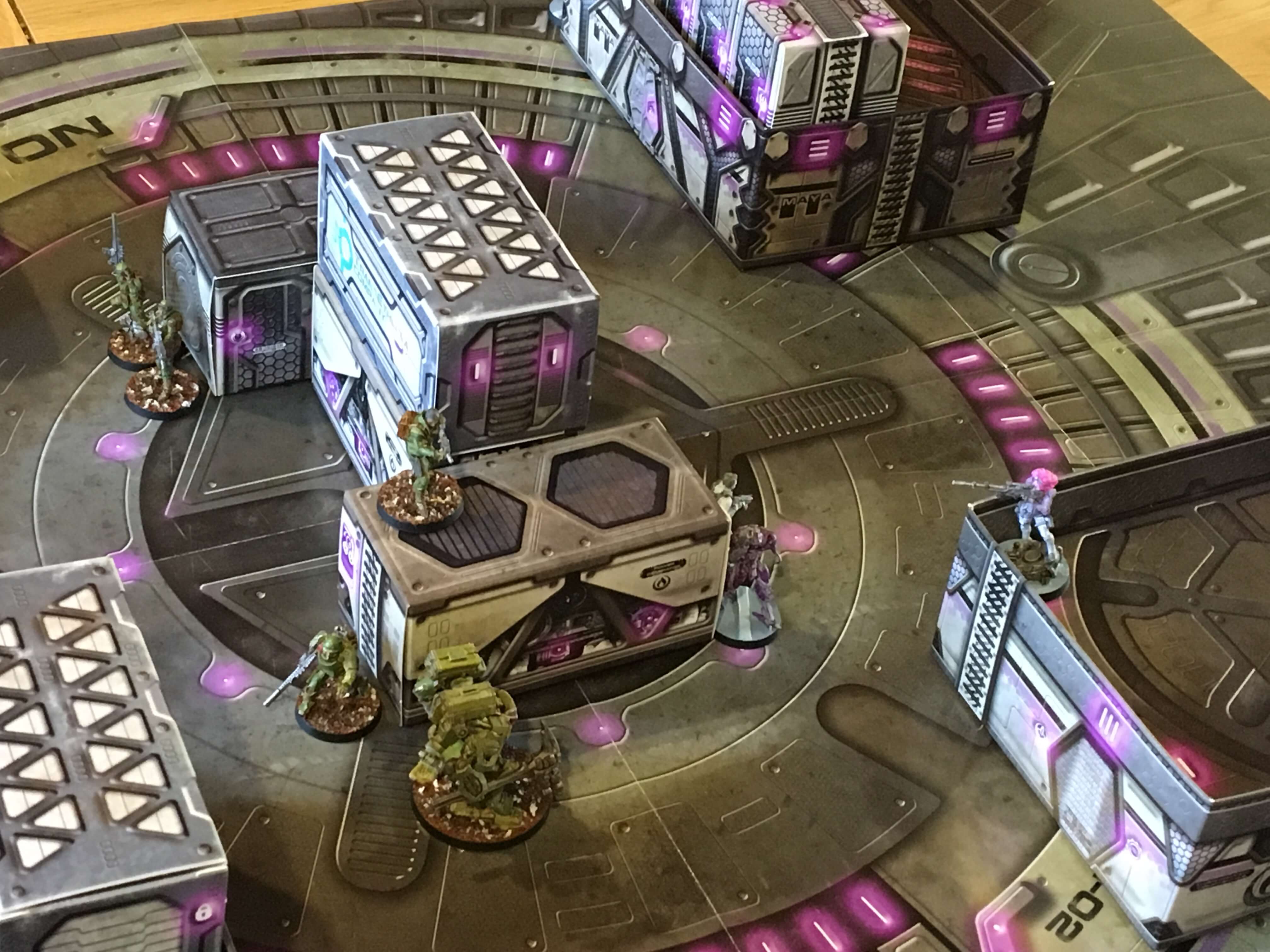 Operation Coldfront is an excellent miniatures game and, whilst I’m speculating a bit, I’d say that Infinity as a series seems pretty excellent as well. Broadly speaking, you can align my comments about the miniatures, scenery and other physical components specifically to Operation Coldfront, but the way the game works in terms of orders, simplicity of play etc… well, that’s all Infinity — which is a broader system than just what I’ve seen here.

I’m not strictly looking to move back into miniatures gaming, but I think that if I did do so now, I’d invest in Infinity because I feel as though it would be possible to add one or two more of the core boxes to what I already have in Operation Coldfront and all of a sudden, I’d have four or six factions, much more scenery, all the dice I need and all of that would have come at a much lower cost (both financially and mentally) than if I attempted to get into one of the various Games Workshop IPs. 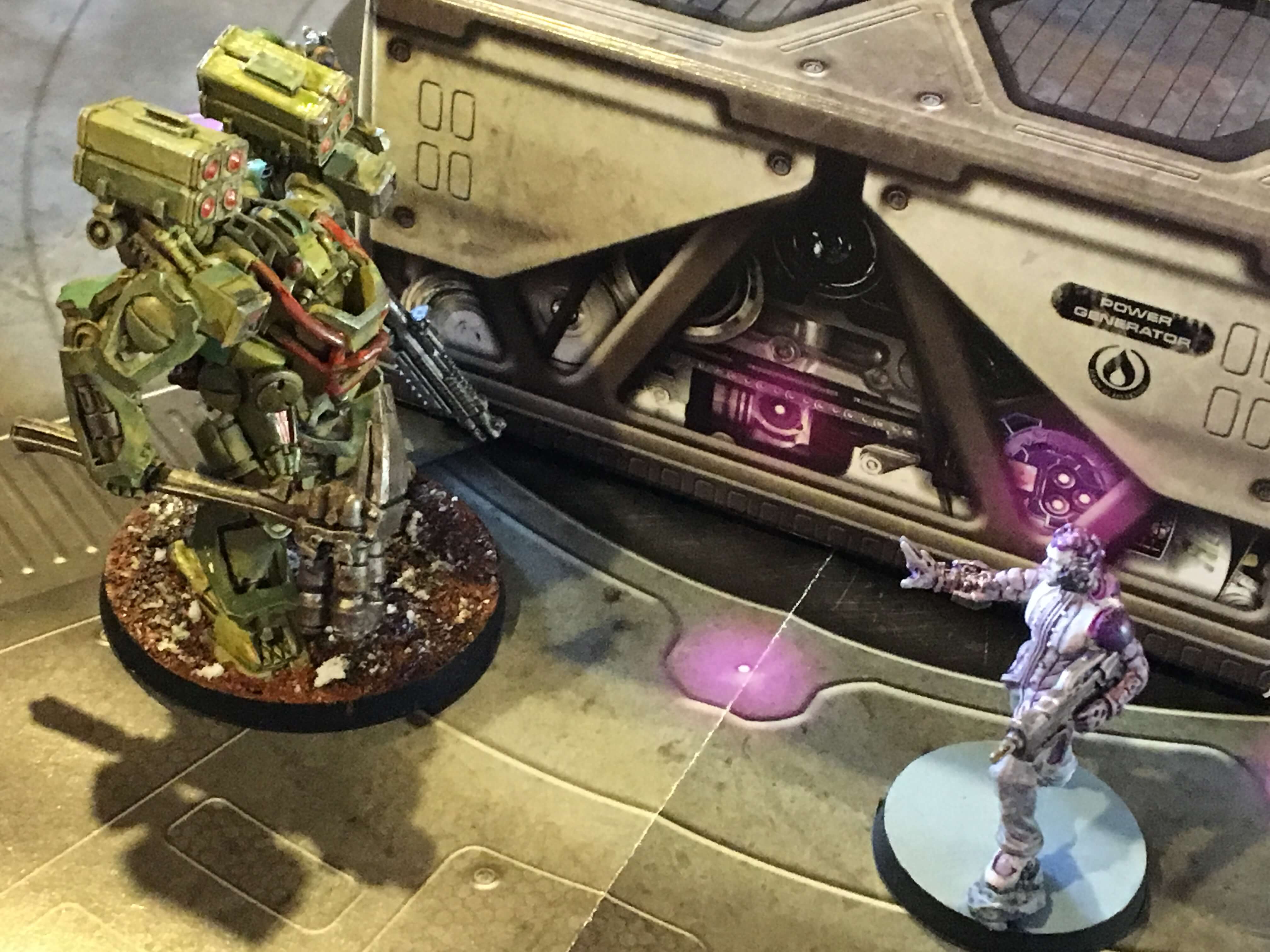 For anyone interested in the work of the man who painted these miniatures (Chris Barrick) then you can find him on Instagram under the name of Wurplepainter, where there are many more examples of his work. Please note that the miniatures in this review were painted by Chris on a commission basis, paid for by the author of this review.

Aristeia! Review — Welcome to the hexadome!