Devil’s Hunt, a new and enticing game visually reminiscent of Devil May Cry and Prototype, is the latest release from Layopi Games.

The narrative of Devil’s Hunt is based on a book series, a story revolving around a struggle between lightness and darkness. This is standard fare for action RPGs, though it’s often a strong premise. When I first began, I assumed that the literary premise would lead to some thoughtful and nuanced narratives, but ultimately action and ambience take priority in this retelling.

As you start a new game, exposition is minimal. You play as a man who wakes up confused by his surroundings, trying to navigate a hellish environment. In the prologue you guide this man, Desmond, through a city on fire. Eventually, you come across some monsters and are introduced to the main combat mechanics. Fighting is relatively simple, but it has a recognizable and respectable natural flow. At first, Devil’s Hunt seems to have the makings of a satisfying beat-em-up, but it quickly becomes clear that it has fallen just short of success. At a baseline, the animations are fun but recycled, repeating too regularly to feel organic. While it’s possible to specialize your attacks somewhat through some solid skill trees, it mostly feels like you’re going through the motions. Still, a sense of meaningful timing in your attacks is certainly present, but this rhythm is easily disrupted by environmental bugs. Within just the first hour of gameplay, I found myself struggling to disentangle Desmond from buggy collisions with rubble and walls. This is especially frustrating when they are seemingly random but still manage to prevent combat from being particularly gratifying, especially concerning as combat makes up a majority (if not the entirety) of the gameplay. 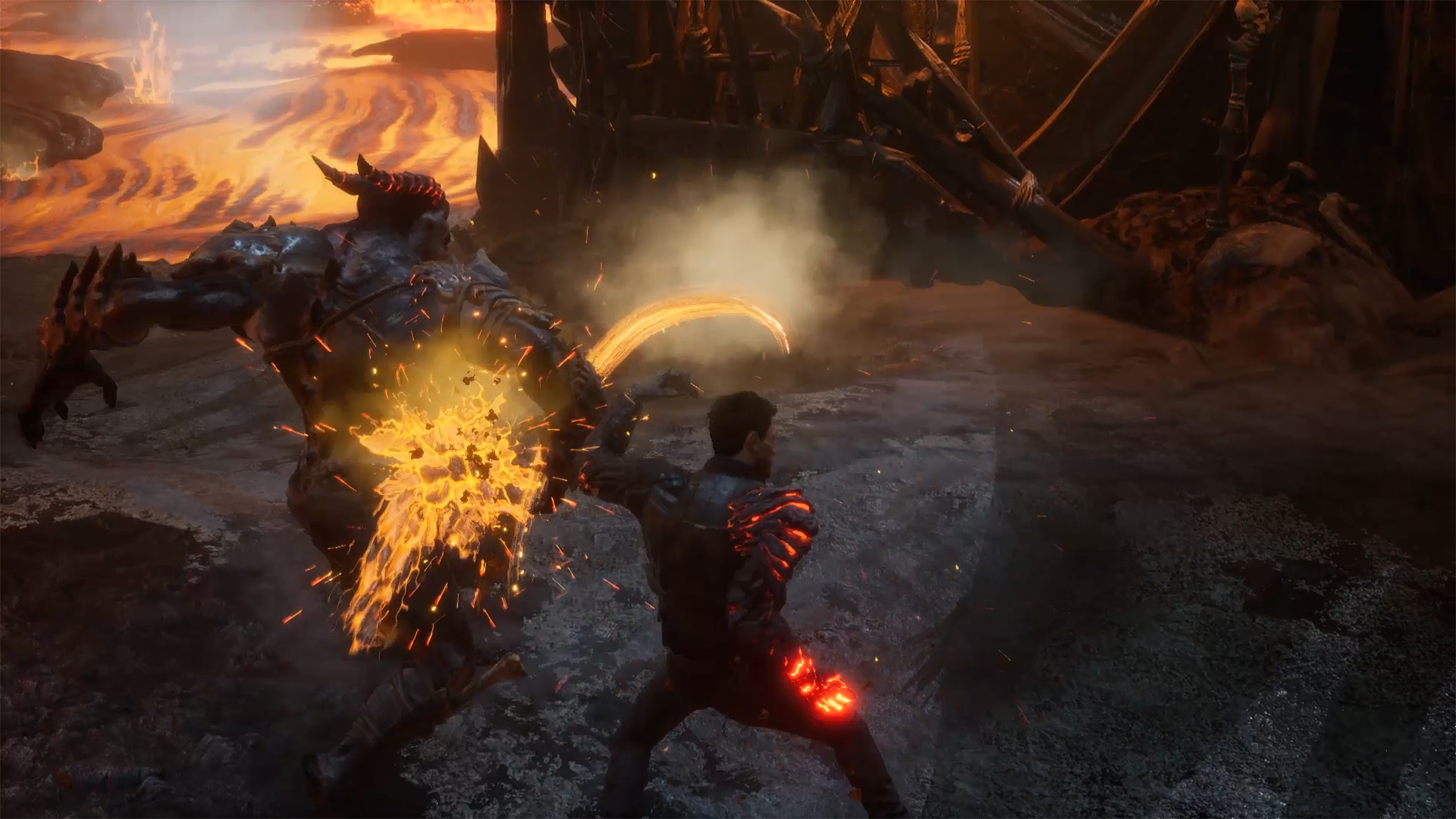 That said, the environment itself is impressive. While it doesn’t reach levels of detail and photorealism achieved in the likes of Uncharted or Assassin’s Creed: Odyssey, Devil’s Hunt tackles highly detailed graphics and models respectably, especially given that most indie studios turn away from styles often found in larger high-budget studios. Generally, the visuals in Devil’s Hunt are convincing and frequently enjoyable. There are several cutscenes that push the narrative forward, and their cinematic nature feels appropriate. However the character models are painfully generic, and despite the clear effort that the voice actors put into an emotional performance, all the characters ultimately look stiff and lifeless, no matter what happens in a cutscene. Desmond in particular is generic to his core, a bland white guy with big shoulders and not much else.

At the end of the day, there’s a reason that indie studios tend to take a more abstract approach to animations and character models — they are far easier to control and execute when they are not forced into a mold of realism. This is a principle that becomes abundantly clear in Devil’s Hunt. Additionally, a certain level of optimization is necessary to pull off realistic environments, and Devil’s Hunt just doesn’t quite meet it. My considerably capable laptop, which runs Shadow of the Tomb Raider without a hitch, struggled to run Devil’s Hunt and even crashed a couple times in the first few hours of play. This may be the biggest barrier of all for those considering playing this game.

As for narrative, Devil’s Hunt is an empty husk that is desperately trying to be more. Desmond is clearly having a rough time from the start, but he is too bland of a character for us to feel for him. His relationships all seem superficial and ultimately meaningless, which makes following plotlines with his fiance and best friend ring hollow. Cutscenes involve long conversations between characters that seem to have no real personality other than swearing regularly and being angry. The only female character I encountered in the first few hours of gameplay was highly sexualized and absolutely void of any meaningful role in the story — a tired characterization, if you can call it that. Despite all the cinematics devoted to propelling the narrative forward, it’s nearly impossible to get invested in the outcome. Even if the combat were fully functional, there would be little narrative incentive to pick the game up again after setting it down.

In all, Devil’s Hunt has some flashy elements and stylish gameplay moments, but it falls short of an enjoyable experience. With some optimization and improved writing, it might have been a solid entry into the action-adventure genre.

Devil’s Hunt is available now for PC on Steam.