Cuphead is known as a very challenging, face past, almost Disney-looking video game that will make you rage quit. Or, well, it does make me rage quit. So, as a result, I was pretty curious on how the intense, face-paced, always going to destroy you gameplay from Cuphead would work in a board game. Cuphead: Fast Rolling Dice Game was set up for failure. I was already waiting to hate the game, to feel it wasn’t a good version of the video game, and was just some art added to a board game. However, Cuphead: Fast Rolling Dice Game had other plans for me.

Cuphead: Fast Rolling Dice Game is, you may have guessed, a dice rolling game. Each player gets a character card, which have four groups of two dice places in a row at the bottom. There is a slot for item or weapon cards as well, giving each player a default ability to start with. You can view your three health points through counters as well as any parrys you have collected. This player card is where a lot of your action is, as you will need to use it to bank your dice. At the start of a level, a boss is put up in a stand. This boss card dictates the amount of health you will be putting on the health counter. Then, in the spaces in front of the enemy, you will place down three to four cards. If one of the first three cards is a Wallop card, then a fourth is placed out. The majority of these cards will be the enemy attacking, apart from Wallops. 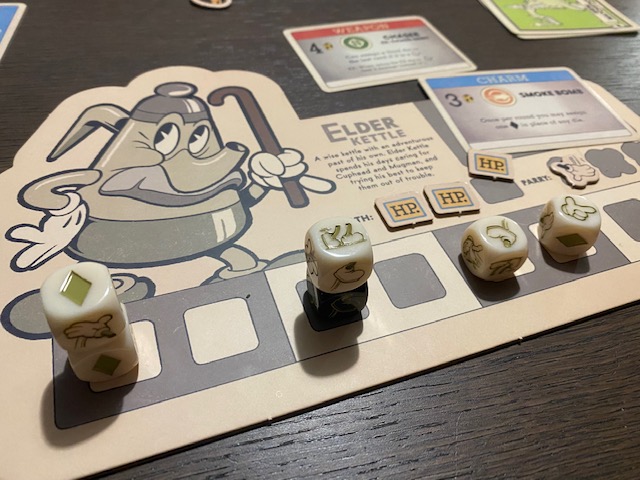 Attacks can, obviously, harm you if you do not counter them. At the bottom of each attack cards are symbols, which have to do with the dice you roll. When the timer starts, you will need to start rolling your dice quickly, banking them in the places left to right, in the same order as the symbols show up on the cards above. You cannot suddenly fill in the third card in the row, without completing the first card, which means that with a 20 second timer, you will be rolling quite rapidly! Any enemy you do not defeat, will attack you, taking one of your health points. If you only have one health point left, but have a parry, you can use the parry point instead to hit away the attack.

Wallop cards do have a symbol that you need to roll to unlock them, a diamond, however you do not need to defeat wallop cards as they will not harm you. If you do complete them, though, you will get a bonus card from the wallop deck, which can do things like count as a specific dice side, give you a health point, or give everyone a health point, so they are worth doing if possible. Once the timer has gone off, one by one we went through every enemy to see who destroyed them, counting any hits to the main enemy to the counter. You see, one specific side of the dice counts as a direct hit, and can be banked on a card that has only one symbol needed, taking up the second dice space on that area of the player card. This will eat away at the health of the enemy, which needs to be done to complete the game. Weapons and special cards, as well as using the black dice to attack (which counts as a double hit) can quickly eat away at the enemy and take you to the next boss. 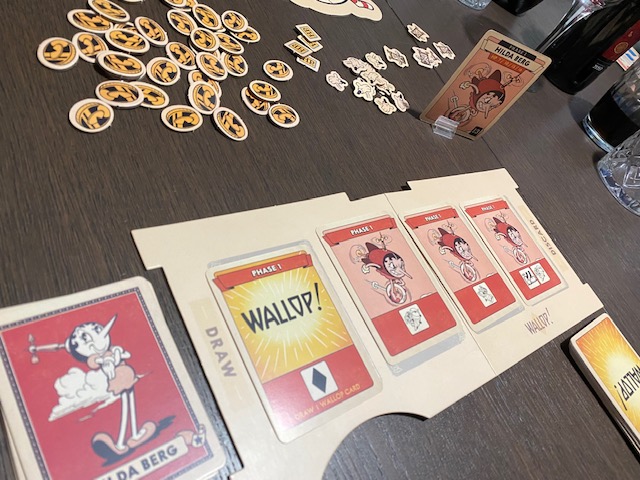 These bosses are the coolest bit of Cuphead: Fast Rolling Dice Game, as the various enemies have different changes to gameplay. As you take on more challenging bosses, they have their own twists. One boss we played against did not have the proper pictures on the cards, and instead forced us to remember what those symbols meant to the dice, while rapidly rolling, which was indeed a big challenge. Another required all of the dice to be stacked for each card, which took a few more seconds to do, effecting the time once again.

Between bosses, there are shop times, where you can earn money for defeating the boss and then spend them on weapons and abilities which really help you, however, it’s often a challenge to remember them. Once you get into the flow of the game, you can find yourself taking advantage of these abilities. It’s also worth mentioning the game does end if anyone dies, not if you die, so there is some team work in this board game, but none when it comes to rolling dice and trying to place them all down! 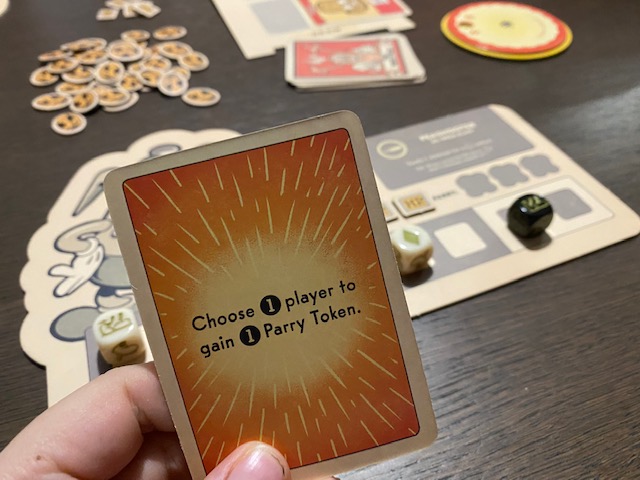 We used the game’s companion app to track the time, as well as put our boss finals into, to get a score, which was fun and useful. The game also had a bunch of bits of paper to do this manually, if you were interested in your own score. Cuphead: Fast Rolling Dice Game is one of the best games we’ve actually played with our group, and we ended up playing just this game in this entire tabletop session, where as we normally play two or more. It is just so fun, so quick, and getting into the bosses is really a great time.

You can find Cuphead: Fast Rolling Dice Game on Amazon.