Why you should pull the trigger on Colt Express Big Box

Big Box versions of popular board games can be a bit of a mixed, erm, box. It can be extremely tempting to think of the “value” you’re getting when investing in a box that includes a base game and any number of expansions, both in terms of money and space — I know better than most how “expansion bloat” can fill up your shelves. The problem is, Big Box editions can make the experience of learning a game daunting for new players. Thankfully, Colt Express Big Box is super simple to get into, and thanks to an excellent instructional pamphlet, you can learn what this great game has to offer at your own pace.

In brief, the premise of Colt Express is a simple one. Between three and six bandits (players) simply have to rob a train — which they will do over the course of five frantic rounds of card play. Each player has their own hand of cards, as well as a bandit “ability” card, a player mat and a deck of bullet cards representing the barrel of their revolver, and they will use these things to plan and execute their turns. 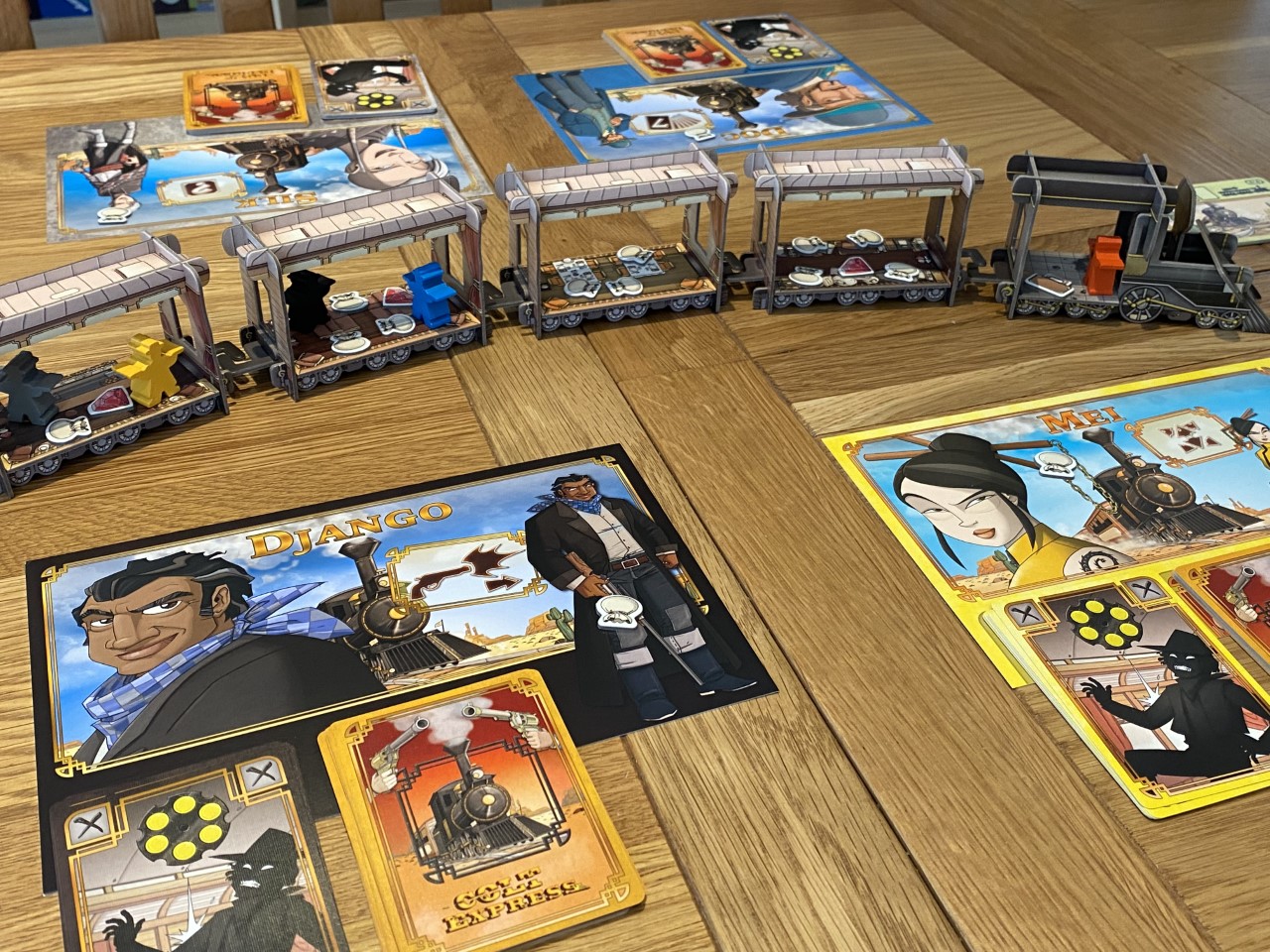 Just briefly in terms of how Colt Express Big Box plays, I’ll mention the flow of a turn. Each round, a single card is revealed from the five that were set up at the start of the game, and this dictates the “style” of the turn, of which there are three. For a normal, single card turn, each player (in order) places one card face up on the stack. For a “tunnel” turn, they place a card face down. For a “paired” turn, they will place a pair of cards, with the one they want to execute first on the bottom. The main thing to remember is that all four (or five) turns on a single card are stacked in turn order, but all together — there is no pause to play actions after each card is placed, instead, action happens at the end of all cards being placed. This process is called the Schemin’ phase.

Next, the actions happen — which is called Stealin’ in the game. The stack of cards is flipped over, and cards are resolved from top to bottom. As an example, if Tuco went first and had the “change level” card, he would then have to move to the opposite level of the same car he was in — he cannot choose to do nothing, or do anything else. If Mei was next and she was doing a “shoot” action, then she could choose to shoot anyone in an adjacent carriage (adding one of her bullet cards to their deck). 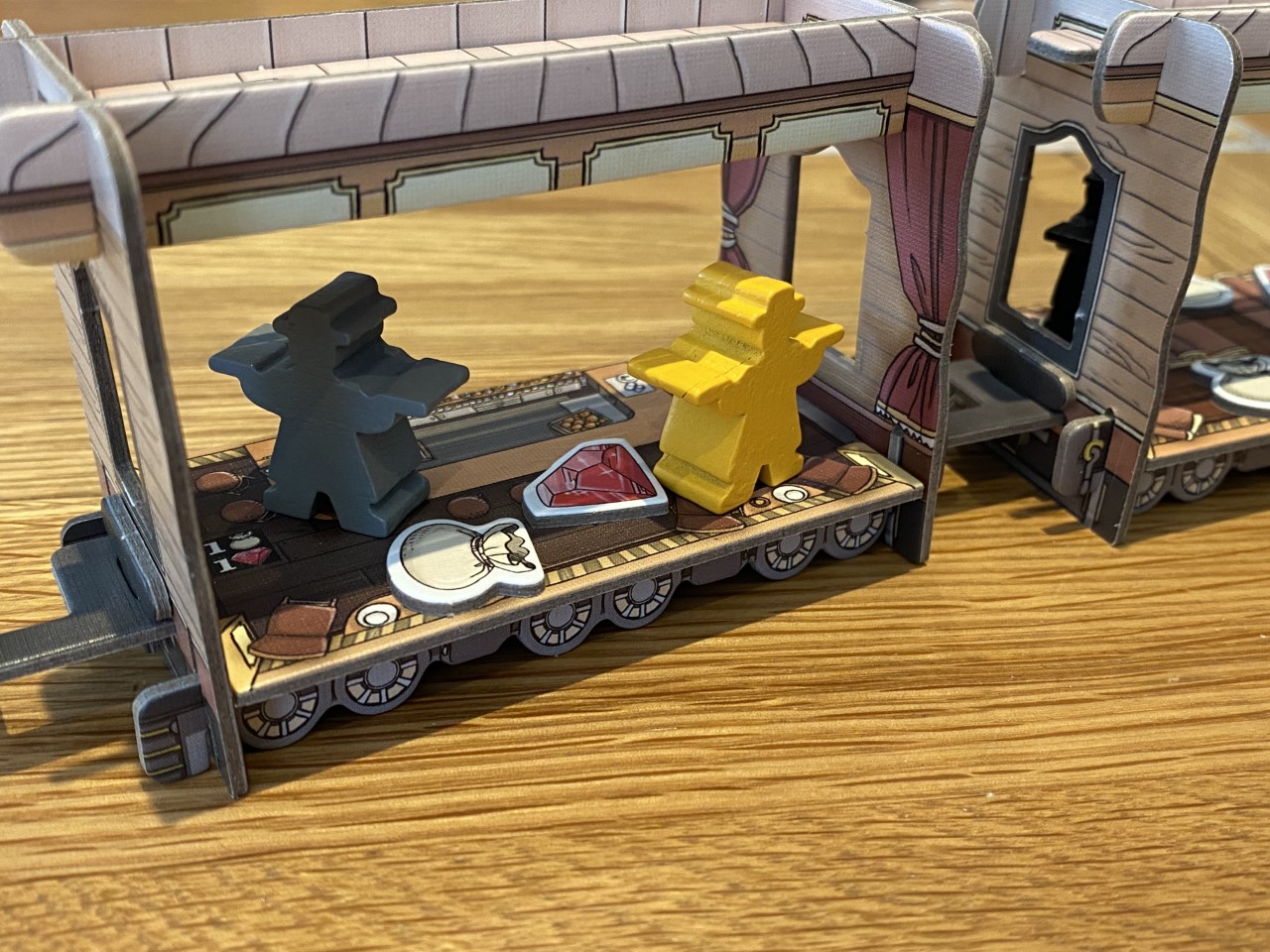 If Belle then “punched” and Mei was in the same carriage, Belle would punch Mei, causing her to drop a single bag of loot. This continues right down the stack, so the idea is that you have to anticipate what your opponents are going to do. When a player draws a bullet card, it simply clogs up their hand and reduces the options available, so it’s good to avoid being shot if you can. The player who shoots the most wins the “gunslinger” award at the end of the game, scoring a significant $1000 dollars in the process.

In the middle of the table is perhaps the real star of Colt Express Big Box — the train. Composed of four to six carriages and a locomotive, the train is made from meeple-sized cardboard models which feature two levels (inside and on the roof) and front and rear panels that keep them together. If you’re playing with either (or both) of the Stagecoach and Prisoner expansion modules (both of which are included in Colt Express Big Box) then you may also have a stagecoach model, or a jailhouse carriage. 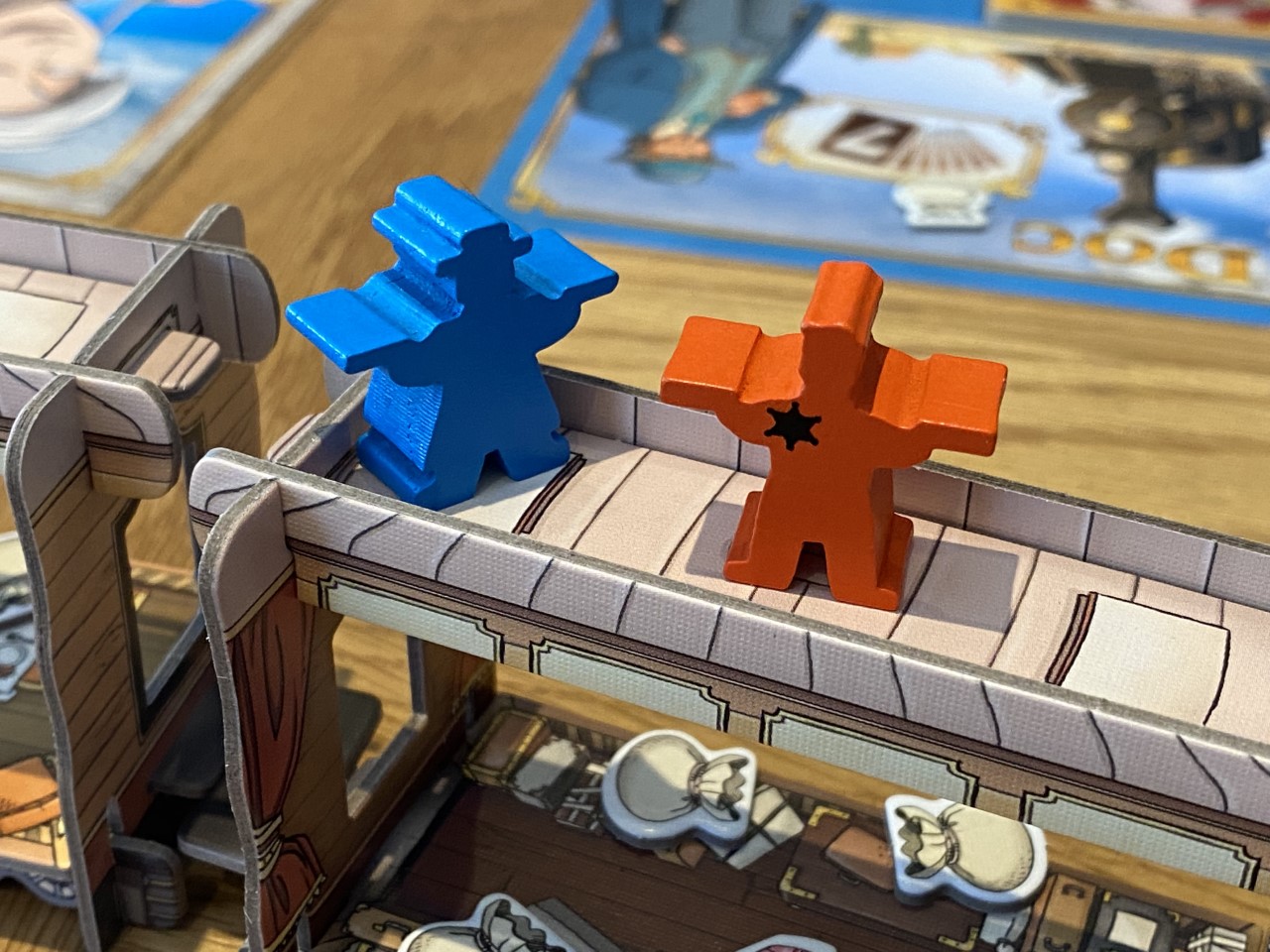 There’s no doubt that Colt Express Big Box steals the show visually, and I’d have to say that it is one of the most  impressive board games in my collection. The three-dimensional nature of the train looks great, but it’s also quite functional in gameplay terms, with the rooftop level of the train offering freedom of movement, and the interior breaking line of sight — both make perfect sense thematically.

On the train, you’ll find the bandit meeples making their way from back to front, whilst the Marshal waits in situ looking after a valuable strongbox. Each coach will have a number of loot tokens in the form of bags and gems — bags have a random value and cannot be looked at when taken. If the players decide to introduce the whisky module (also included) then flasks will also be scattered around, offering additional benefits. 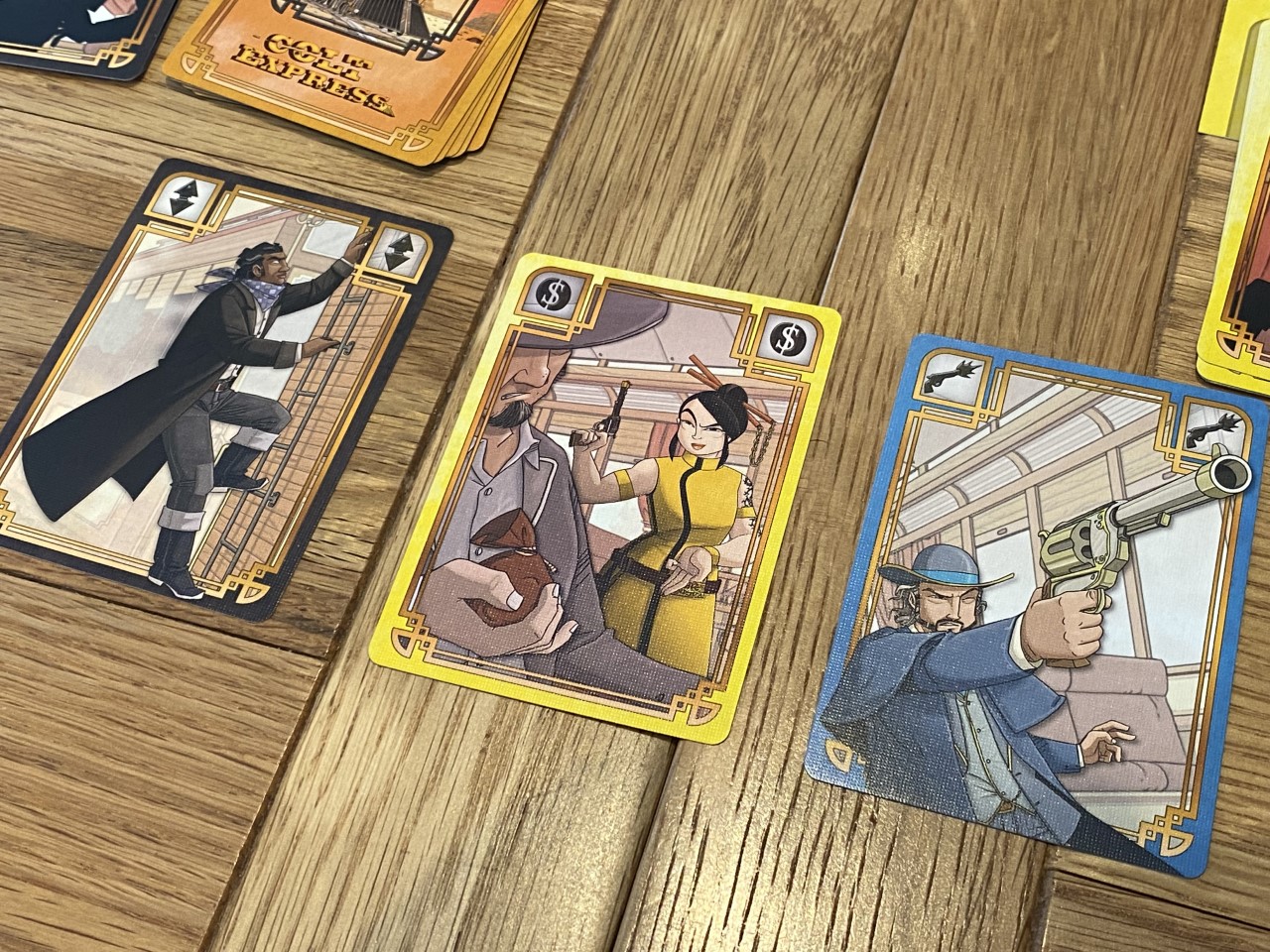 When players choose to use the stagecoach expansion, the stagecoach will literally be placed beside the train, and the bandits will have the ability to jump between it and the train via horse meeples (which actually fit the bandit meeples on their back). The stagecoach is heavily defended however, but if the bandits can climb aboard, they can take a valuable — but annoying — hostage, who will apply a debuff for the rest of the game.

If the prison carriage is in play, then one player may choose to act as the Marshal (who has his own objectives to complete, as well as a second deck of bullet cards to represent his twin revolvers). Players may also reach the prison car at the rear of the train and attempt to rescue a prisoner there, which effectively allows them to take a second special ability — fantastic. 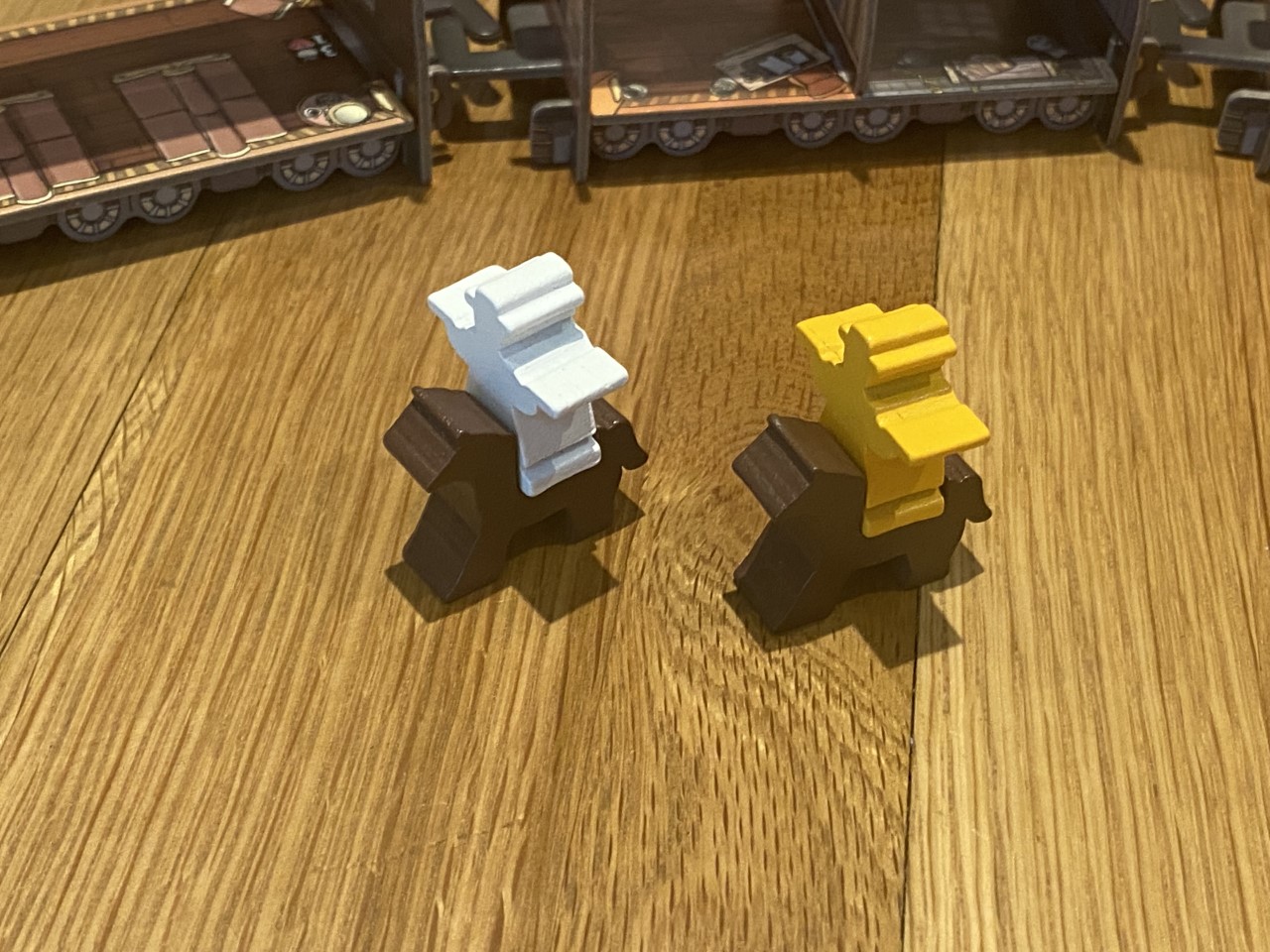 Now if we go back to the flow of Colt Express Big Box briefly — what we have here is a programming game that has a reasonably straightforward base game, but then five or six separate modules (and some additional characters and minor tweaks) that can introduce real variability. The Marshal, for example, has a completely different play style to the bandits and is clearly focussed on different objectives. He’s tough, so the bandits need to team up, but then if they do win, someone among them is still the actual winner based on their take — so how long will any alliance last?

The stagecoach, with its second strongbox and valuable hostages adds new ways to increase the score well beyond that of the base game, but again it introduces new risks and complexity. Will you be able to make it to the stagecoach at all, and if you do, will you be shot off it more or less immediately? New abilities provided by the whisky (draw and/or play extra cards) or the reduced prisoner mitigate some of the new challenges, but are often a challenge and at the very least a distraction to get to. 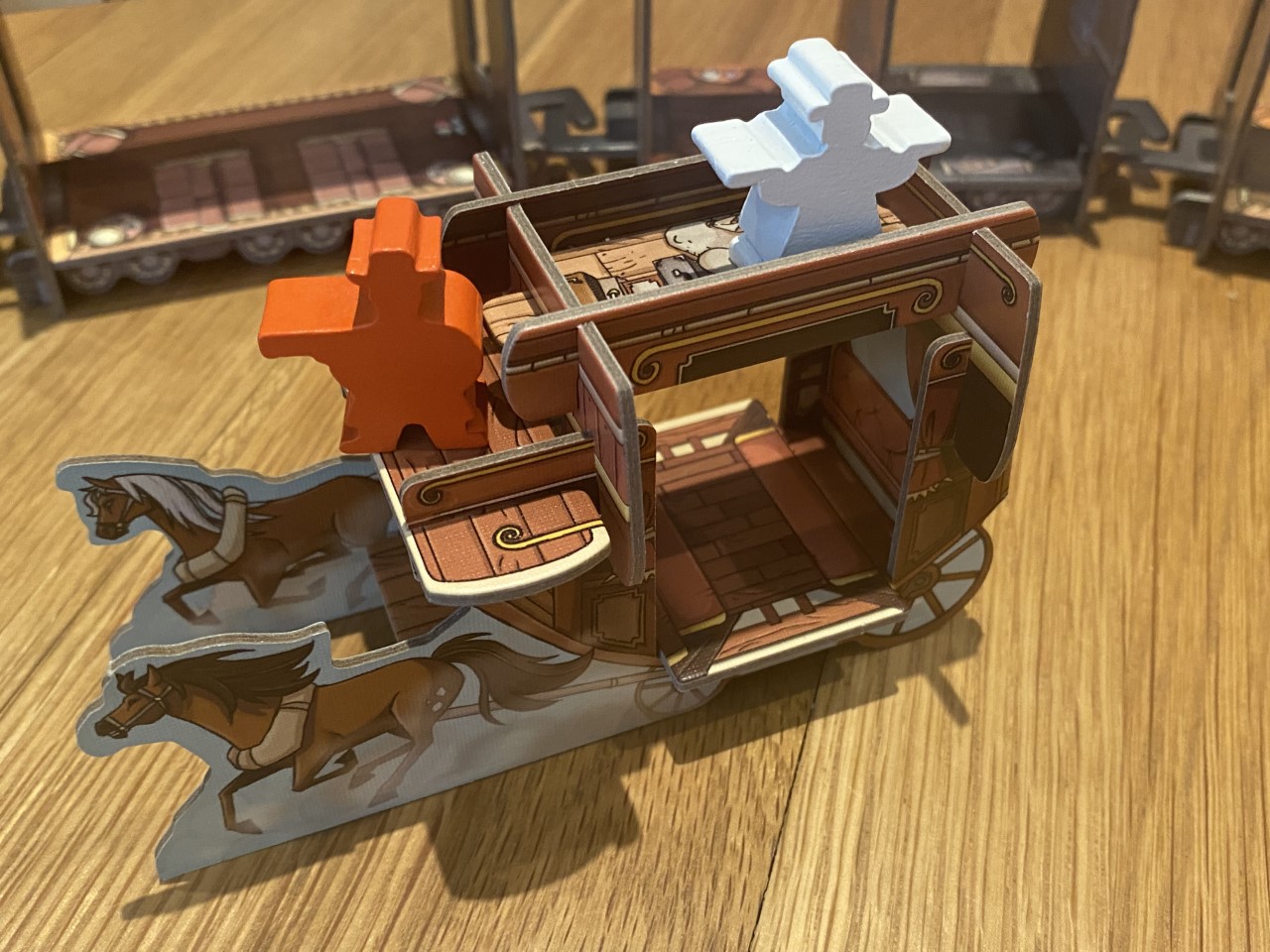 Colt Express Big Box is just a massive box of chaotic fun, and it offers gameplay options that range from simple to learn and teach right through to being reasonably complex. However you choose to play it, the game is mostly satisfying and rarely frustrating, and only very young players seem to struggle with the concept of programming all of their actions first and then replaying them — I have to say, playing open-handed really helped here.

With rumours (and even a confirmation within the Colt Express Big Box manual) of a further expansion for Colt Express Big Box, you can be sure that this is a good place to either start your collection, or upgrade to if you have just the base game. The next expansion will likely fit straight into the box, so you don’t even need to worry about clearing more space, and in truth there is more than enough content here to keep you going for many, many games — each of which will be varied and exciting. Colt Express Big Box is fantastic, and it’s a game I certainly recommend that a gamer of any experience should be jumping into.

You can find the Colt Express Big Box on Amazon.