The release of Oh Captain! marks the first game in creator Florian Sirieix’s Legends of Luma series, which is set to include six different games based around a persistent band of heroes. This debut entry is a game of bluffing and set collection for three to six players. It features cute artwork reminiscent of a kids game, but in actual fact, some elements of gameplay are more complex than they appear. With the unique prospect of additional and varied games based on the same characters to come later, does Oh Captain! have enough clout to make players invest in The Legend of Luma?

Beginning with that cute artwork, Oh Captain! features a fantastic Euro-Japanese art style which paints colourful and characterful images onto every component. The box is bold, bright and ingenious, containing all of the game pieces snugly in a moulded plastic insert and unfolding in a pleasing and unusual way. The components themselves are simple: six character sheets, a deck of cards, a cave made from four interlocking cut-outs, a stack of coins, three banners and a message in a bottle. The brief story of the Legend of Luma included in a small booklet is equally appealing, and the only downside really is the manual, which is brief at just a few pages, but slightly ambiguous, which I’ll come back to in the next section. 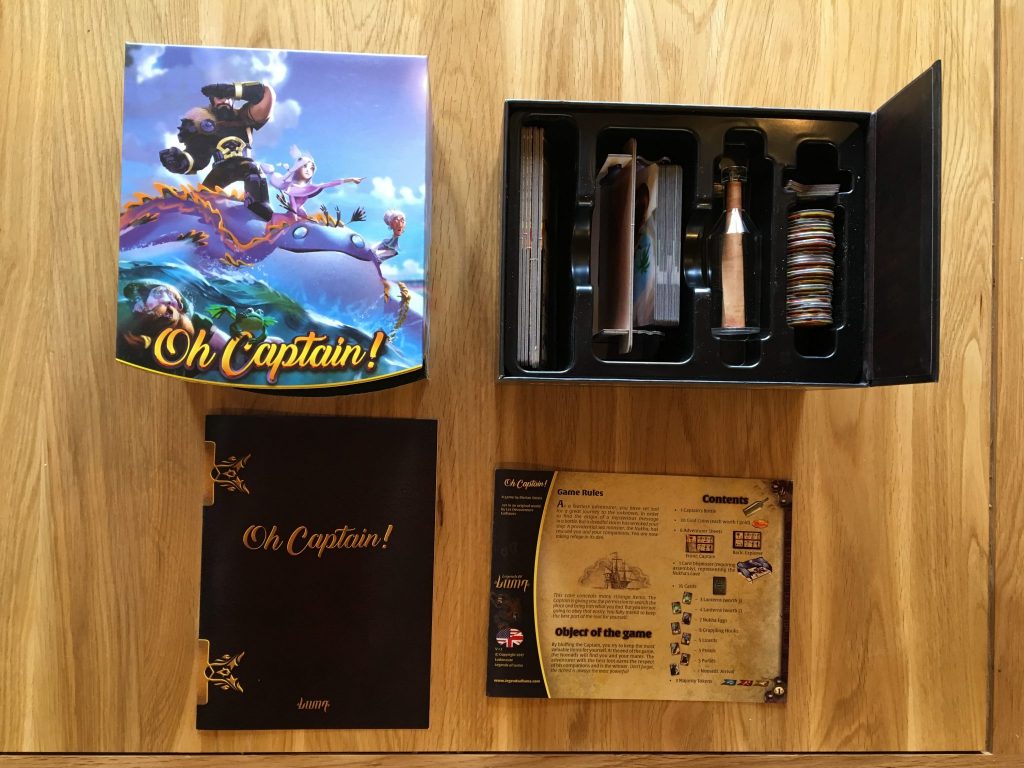 The manual instructs that players determine randomly who should be captain at the outset, a rank that is marked by placing the message in a bottle in front of them and turning their character card to the captain side. The rest of an unwieldy setup then takes place, with some cards being separated from the deck for the non-captain players, some being excluded from the game altogether if there are less than six players, and then a nomad card being put aside for now whilst the remaining cards are randomised.

If this wasn’t already confusing, several (unseen) cards are randomly drawn from the deck and placed under the message in a bottle to form the discard pile, which the captain can view at any time. Finally, three more cards (unseen by all) are drawn and shuffled with the nomad card, before all four are placed at the bottom of the main pile, which is then placed face down in the cave. Phew – perhaps that’s why the manual makes such a ham-fisted job of explaining things, but this is only just the beginning… 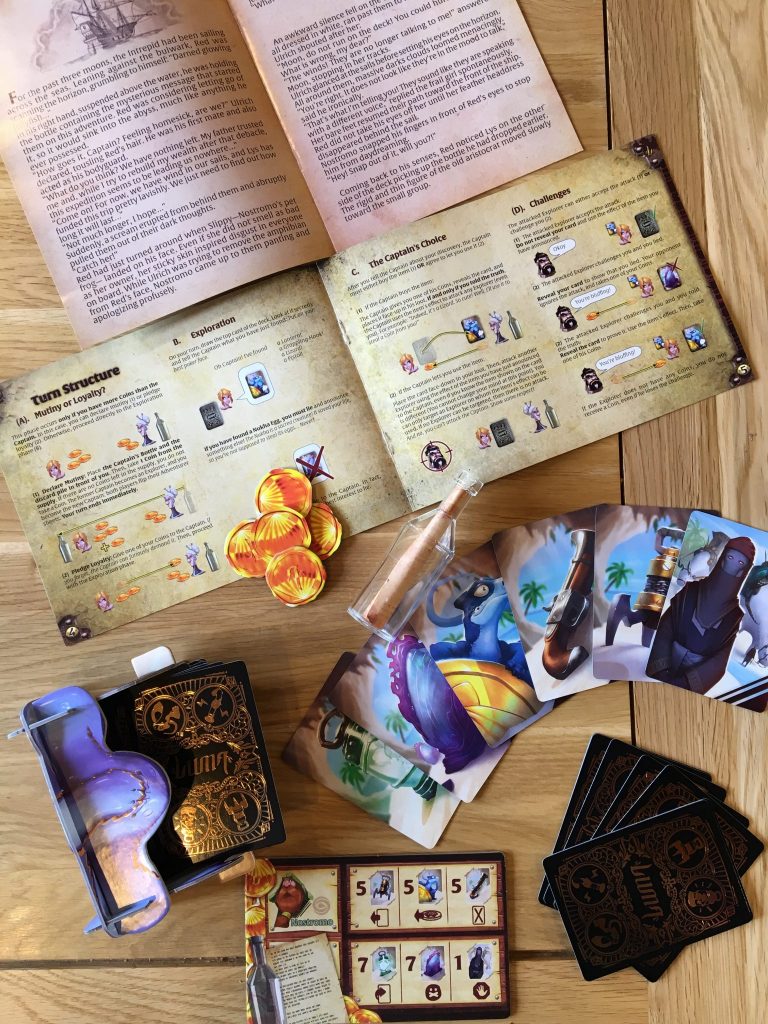 The next thing to overcome is understanding the role of the captain, and the other players who are named explorers. In game, I found this took a few rounds to get used to, but to simplify, I’ll explain it here. Explorers take it in turn to draw cards from the cave, and as each card is drawn, the player turns to the captain and says “Oh Captain! I’ve found a …” The captain then declares either that the player must use the item (on another explorer, but never the captain) or that he or she wants to buy it.

If the captain instructs the explorer to use it, then that player chooses another explorer and advises them as such. This player may then respond by either accepting the outcome (which depends on the card being used) and the card remains unseen. Or, they may challenge the player, which forces the card to be overturned. At this point, if the player is proven to be telling the truth, then the effect of the card resolves, plus the player targeted must pay an additional gold. If the player was lying, then they pay the explorer that they targeted gold instead. In any event, if the captain doesn’t buy the card, the explorer keeps it and adds it to their hand (either face up or face down depending on whether they were challenged.) 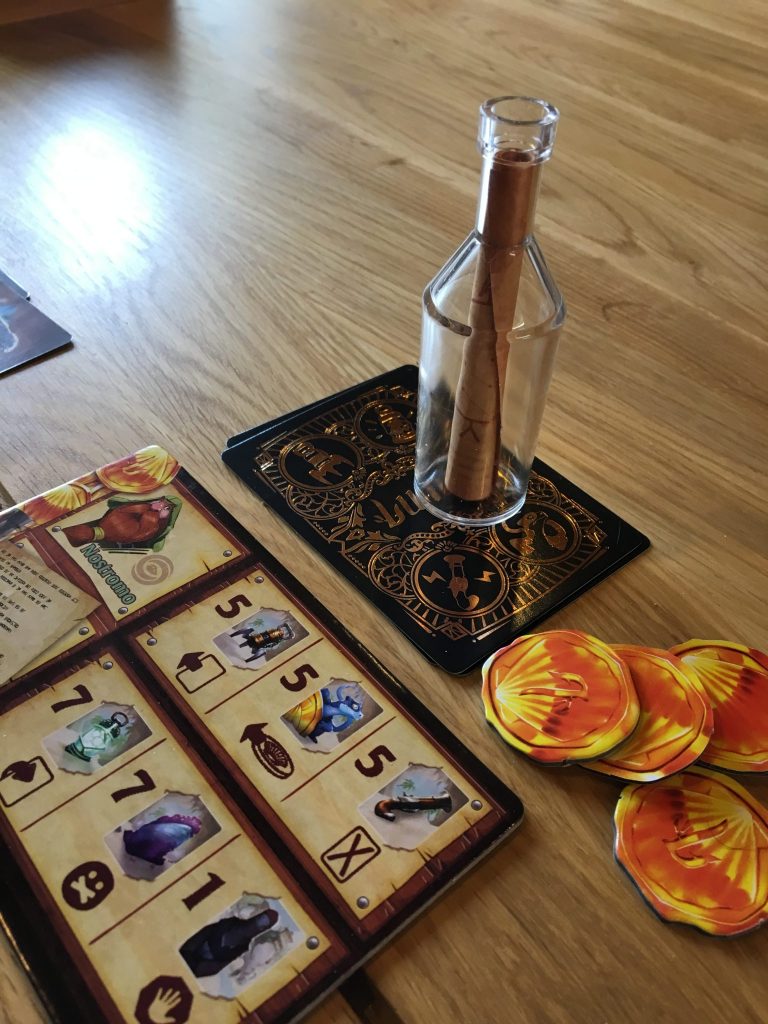 If the captain buys the item, they pay the explorer one gold and take the card, adding it to their deck. If the player was being truthful about the item they found, then the captain must turn it face up and use it, targeting any explorer (including the one who found the card.) If the explorer was lying, then the captain may not use it, but adds it to their hand face down instead. Phew again, and as I said, this entire sequence of possibilities takes some time to get used to, but…

Once you do find a rhythm, Oh Captain! begins to feel like quite a lot of fun. Each character card reminds players how many of each card are in the deck, and as players face up (and face down) hands begin to develop, lying becomes increasingly tricky. This is not helped by the fact that one of the most frequent cards is the sacred Nukha Egg, an item that explorers must lie about, and which decreases any final score by one point. There are also bonus points available for the player who collects the most pistols, lizards, and grappling hooks from the deck, whilst lanterns each have an individual value in coins printed on them. Grappling hooks allow players to steal cards from other explorers, leading to ever more elaborate methods of attempting to engineer a means of using them. 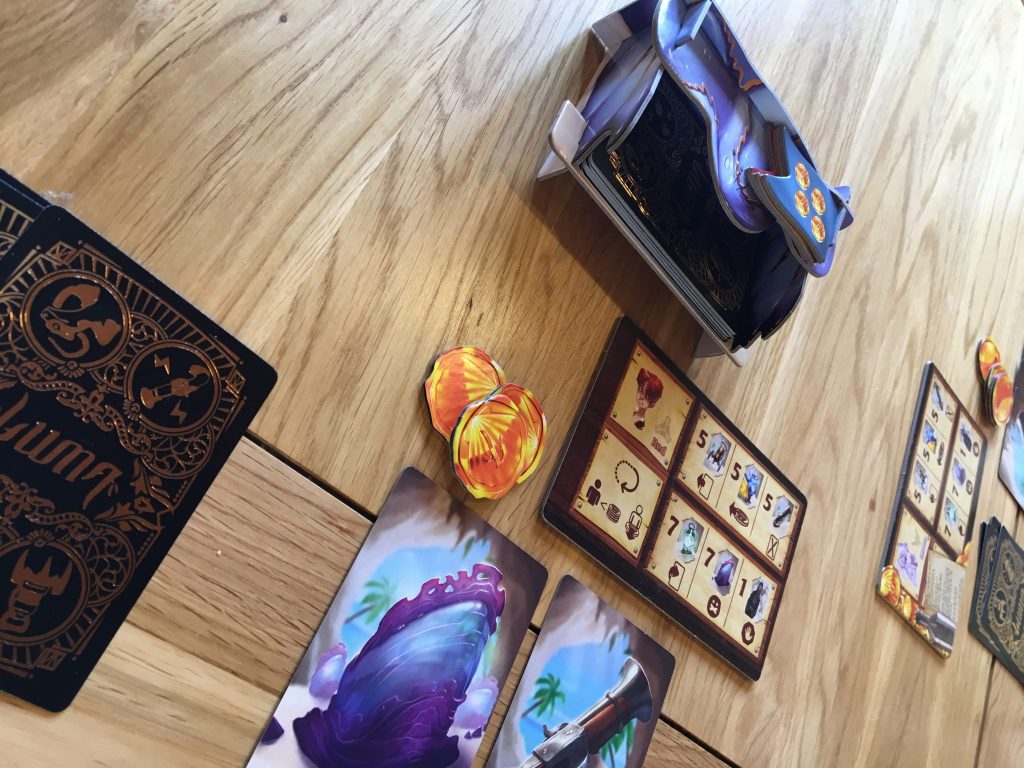 As if this wasn’t already quite a complex set of possible interactions colliding in quick succession, any explorer who has more gold than the captain can declare a mutiny and immediately claim the captaincy. Because the captain is incentivised to buy cards from the explorers, their coin stash always dwindles, whilst explorers find more opportunities to move coins and acquire them, often through their special abilities which are unique and varied. As a result, the captaincy will change multiple times in every game, and except in the event of a targeted effort by all other players to single one explorer out, inevitability dictates that everyone will get their turn.

Once all this complexity has been understood, Oh Captain! really begins to pick up pace, and players fall into a natural rhythm of drawing cards, pitching them to the captain, bluffing to the other players, declaring mutinies and using their special abilities. At the same time, repeat games teach players to pay closer attention to the visible cards, and what they can remember from the discard deck when they were last captain. The better players get, the more important set collection and maximising scoring potential becomes, including using items like the grabbling hook to nab key cards, and the pistol to force explorers to discard their highest scoring ones. 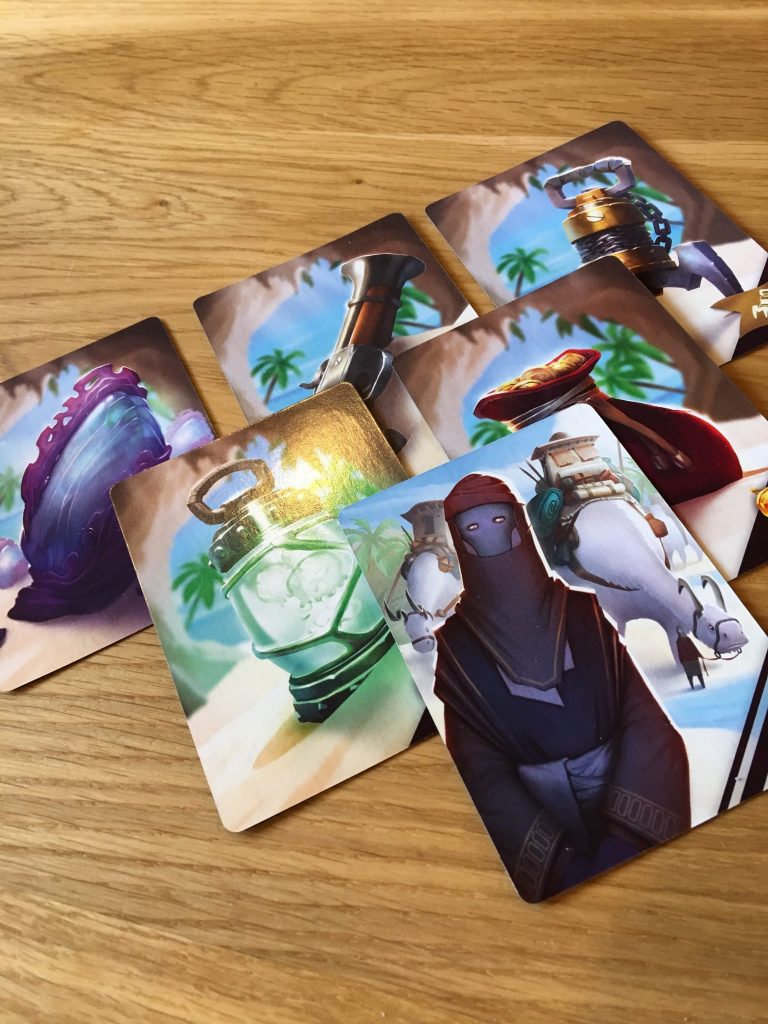 And so Oh Captain! is complex for several reasons, the first and second of which are fairly negative, but thankfully short-lived. The setup is far too complicated, and learning the rules almost caused my gaming group to quit before we had even begun. Thankfully, we pushed through and discovered what really makes Oh Captain! tick. This is a bluffing game that has a surprising amount of depth, to the extent that it can actually hold the attention of an audience for more than about three or four rounds before boredom sets in, which has always been my experience with similar games. The characters, artwork and promise of a persistent universe that will reuse them in different and interesting ways adds flavour to the mix, but in all honesty I found myself simply enjoying Oh Captain! for what it is. My advice? Make sure you are highly familiar with the game before you begin, and work out a system for teaching new players, and you can’t go too far wrong.

Oh Captain! has a regular RRP of £24.99, and a copy was provided for review purposes and is available via 365 Games or through this handy Store Locator.

Why you should pull the trigger on Colt Express Big Box