As modern board games become more and more popular, the temptation to use increasingly bigger boxes with more and more elaborate components is more than some publishers can resist. For design Anthony Gibbins and his company (Bow String Games) however, less is often more —- and Bellum Sacrum proves it.

Bellum Sacrum is packaged in very nearly the smallest box possible. It’s as long and as wide as a normal 52 card box, but thanks to the inclusion of two mechanically identical decks, a pamphlet and nine trophy cards, Bellum Sacrum’s box weighs in at about twice the depth. The cover art is just as understated, with a British Racing Green paint job and stark, white images of the Gods of antiquity almost etched into it.

Once inside the box, this theme is continued. The basic premise of Bellum Sacrum is a simple one. Each side (this is strictly a two player game) has one deck made up of a set number of cards valued I to X (using Roman numerals.) These decks are completely identical in terms of how many cards of each value they have and what those cards do, but one deck is made up entirely of male Gods and the other entirely female — players can mix and match these cards freely, so both decks could be mixed sex, or you can play male versus female etc. 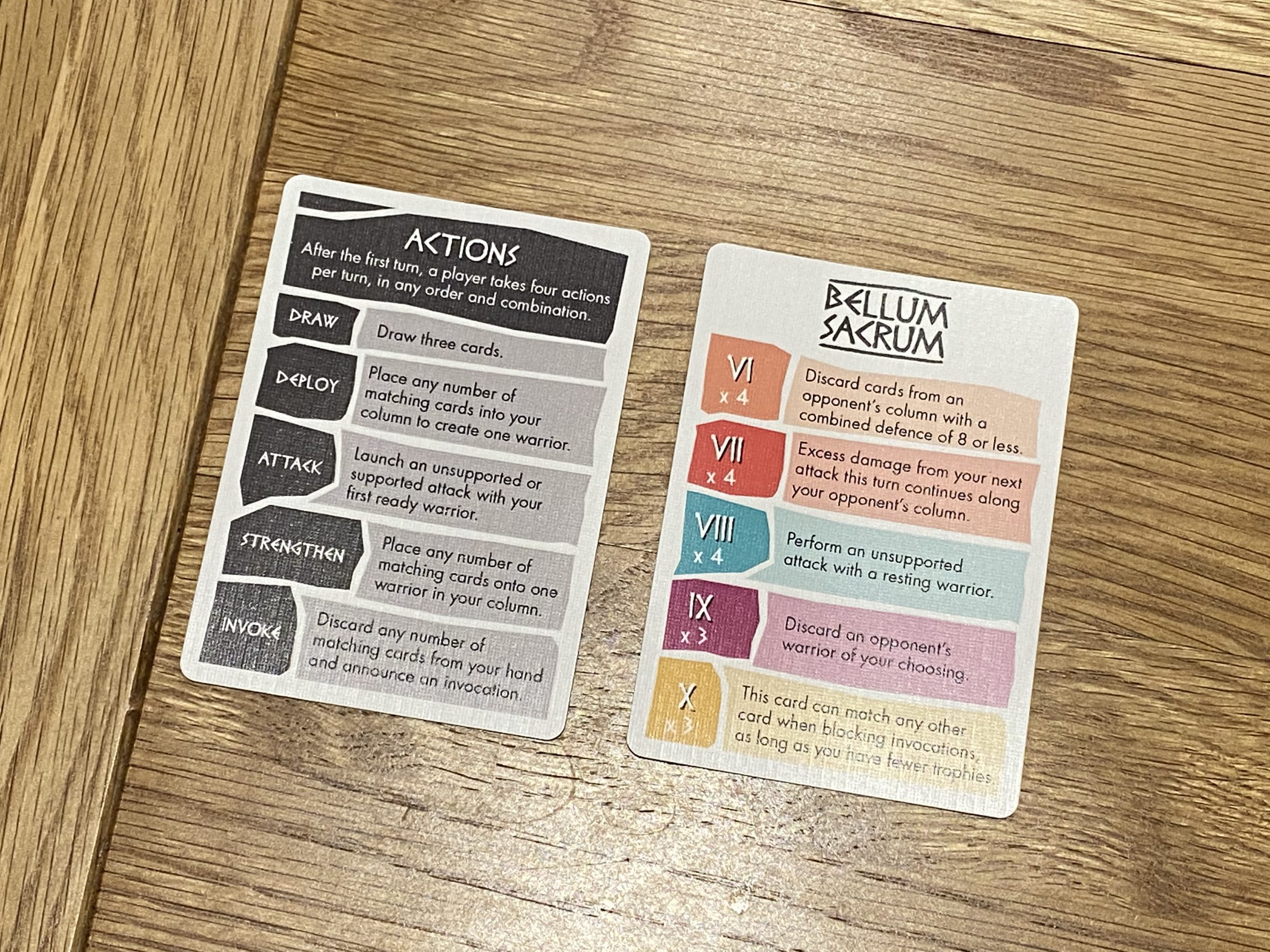 The only other cards in the box are the nine trophy cards, and these will be handed out to players whenever they win a victory against the other player, which I’ll explain shortly. If you’re wondering why there are exactly nine trophy cards, that’s because the winner of Bellum Sacrum will be the player who ultimately scores five victories (and claims the trophies) first. Games can take as little as fifteen minutes if the players are unbalanced, but, as I’ll discuss later, evenly matched games can take a lot longer to resolve.

Gameplay isn’t as easy to learn as some games, but only because Bellum Sacrum uses some slightly unique mechanisms and has a few balancing features that must be remembered. Within two or three games, any player who has experienced a game like Chess or similar should have no trouble in picking up the concepts and getting used to them. What makes Bellum Sacrum interesting — like any good two player game — is how long it takes to master, especially when you play against the same opponent often.

As a quick overview, Bellum Sacrum is effectively a card driven tug-of-war (or really more like a push of war). Each player begins with five cards from their deck (which will be shuffled during setup) and will then and will then build a column of three ranks of “warriors” — a front, a middle and a rear. A warrior is any card in one of these ranks, but players may also place multiples of the same card into any of these ranks, increasing the strength accordingly. 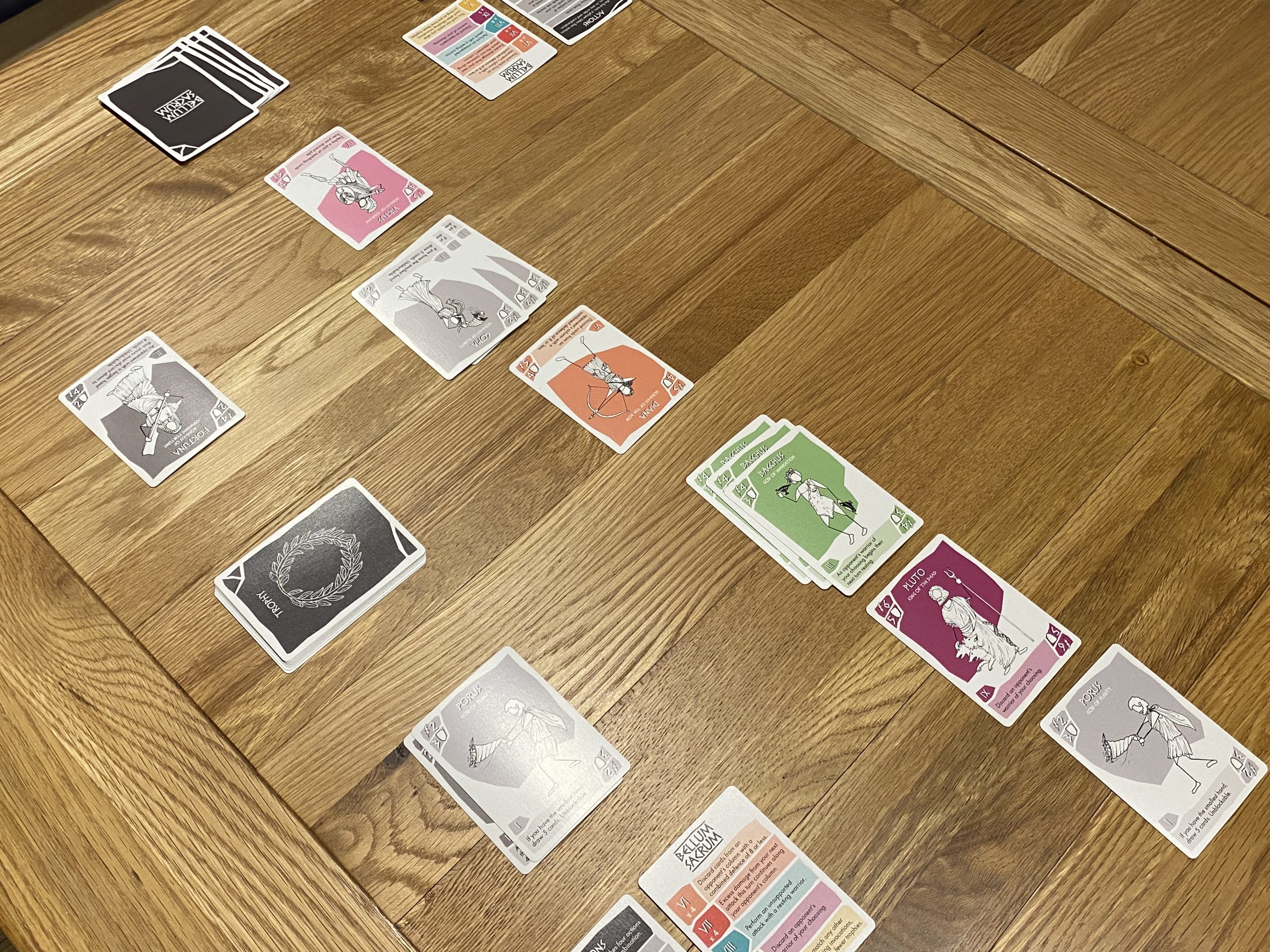 With the idea of each player having a column of cards on their side, imagine that each card has both an offensive and a defensive value. Unlike in some card games, these are rarely “even” numbers such as 4 and 4, and you’ll see variations as broad as 4 and 2, or 5 and 0, for example. The idea here being that some cards are much better at offense, and others at defense. You should also bear in mind that only the front rank of the column can attack (but the middle and rear ranks can support the front.

Each player has four actions on their turn (except the first player’s first turn, which has three, and the turn immediately after a player claims a trophy, where the “losing” player gets five) and must use them wisely. Each attack costs an action, as does placing cards into the column (turning them into warriors) or adding cards to an existing warrior.

The final action that I haven’t mentioned yet is what really switches Bellum Sacrum from being a relatively straightforward card game into something much more interesting. Instead of using a card as a warrior, players may also activate the ability on a card to use whatever the effect describes. These effects include forcing the opponent to discard cards, immediately “destroying” a warrior and drawing five cards of your own – depending on certain circumstances. 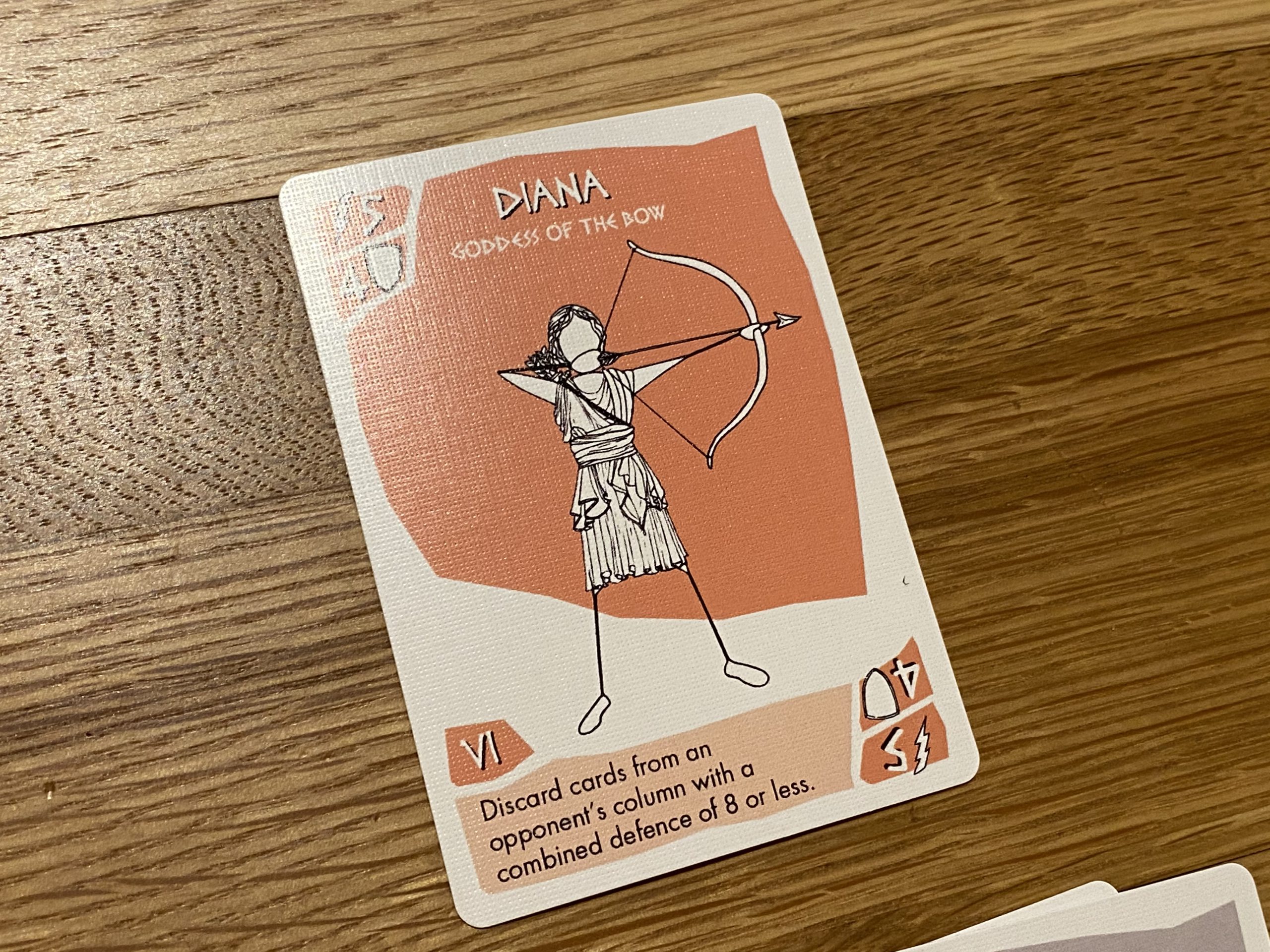 Let me just explore that last statement for a moment — depending on certain circumstances. This is the key to Bellum Sacrum and it creates the landscape on which this game operates – a landscape that is almost perfectly balanced. Taking a trophy is great — but the opponent getting five actions the next turn is a problem. If you want to use the ability to force your opponent to discard, you’ll need to wait for them to have a larger hand than you.

When I play Bellum Sacrum, I can literally feel the balancing mechanisms in play, and as two players get better and better at the game, these mechanisms can be used to great effect. As an example, if you have a strong hand but a weak board state, it can be valid to allow your opponent to take a trophy, only to then slingshot yourself back into contention by rebuilding your board, winning a trophy back immediately and swinging the board state in your favour with your five action turn.

There is a slight downside to this balance, which is that “average” players (who know the rules but haven’t mastered them) seem capable of making games run on forever. This is partly because the normal turns have exactly four actions for a reason; because the only way you can win a trophy is with three successive attacks (that destroy each rank of the opponents column). This leaves just one “spare” action that turn, meaning that a large attack is usually built up the turn or two before. 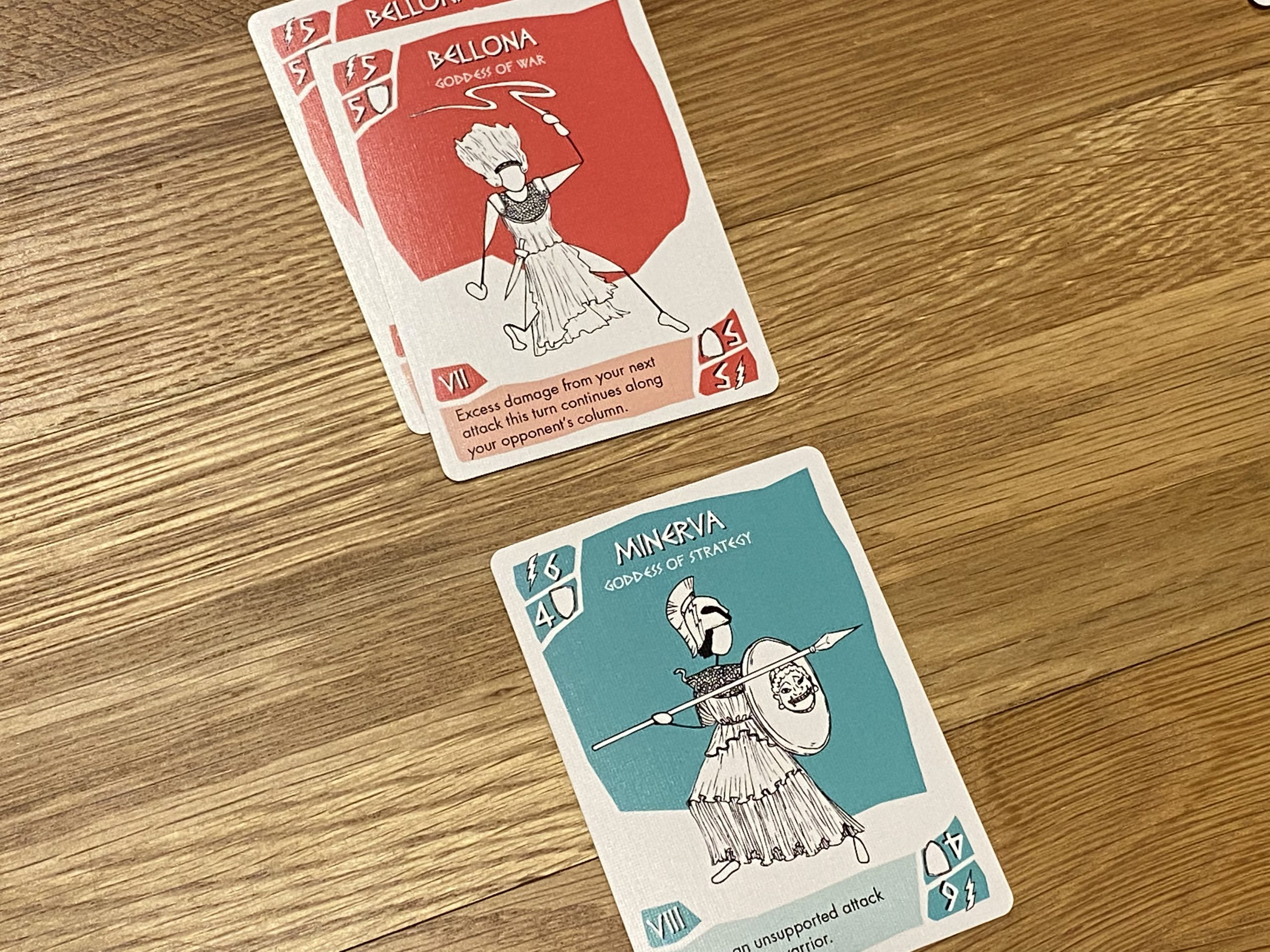 The problem here (which is minor) is that clumsy or inexperienced players simply can’t “get enough done” on a single turn, assuming that both players manage to reach a stable board state. The more cards come out, the harder the arithmetic (and presence required) to break down the opposing column. But honestly, am I criticising a game because it rewards practice and good play?

Of course not, because for dedicated players (like me) who have traditionally (pre-Covid) sought deep, intelligent two player games that can travel easily, Bellum Sacrum is a near perfect answer. This is a game you can take literally anywhere, and as I keep saying, between two players who face off often, there are few better card games at this level of decision weight that I could name. As such, Bellum Sacrum is a game that I think would suit any couple or group who frequently need a “Chess alternative” and in particular, those who travel.

You can purchase a copy of Bellum Sacrum online, directly from the publisher.