Patchwork is a fast, tight, 2-player game of Tetris for your tabletop or your phone

In these uncertain times, when the next lockdown could be imposed at any moment, it makes sense to keep a stock of games that really work at low player counts — and for most households, that means two players. Patchwork, from legendary designer Uwe Rosenberg, is a specifically tailored two player game that lasts no more than 30 minutes, but which offers super tight gameplay.

Patchwork might as well be themeless, or indeed, it could be themed as almost anything due to how bare the theme actually is. The players are each attempting to make the best patchwork quilt — with points awarded for the amount of spaces covered and the number of buttons, and deductions made for any holes in the quilt. This, as dull as it sounds, is a perfect fit for the components and gameplay, with perhaps the one exception being that I’ve never seen a quilt with buttons sewn all over it, but hey-ho, that doesn’t matter. 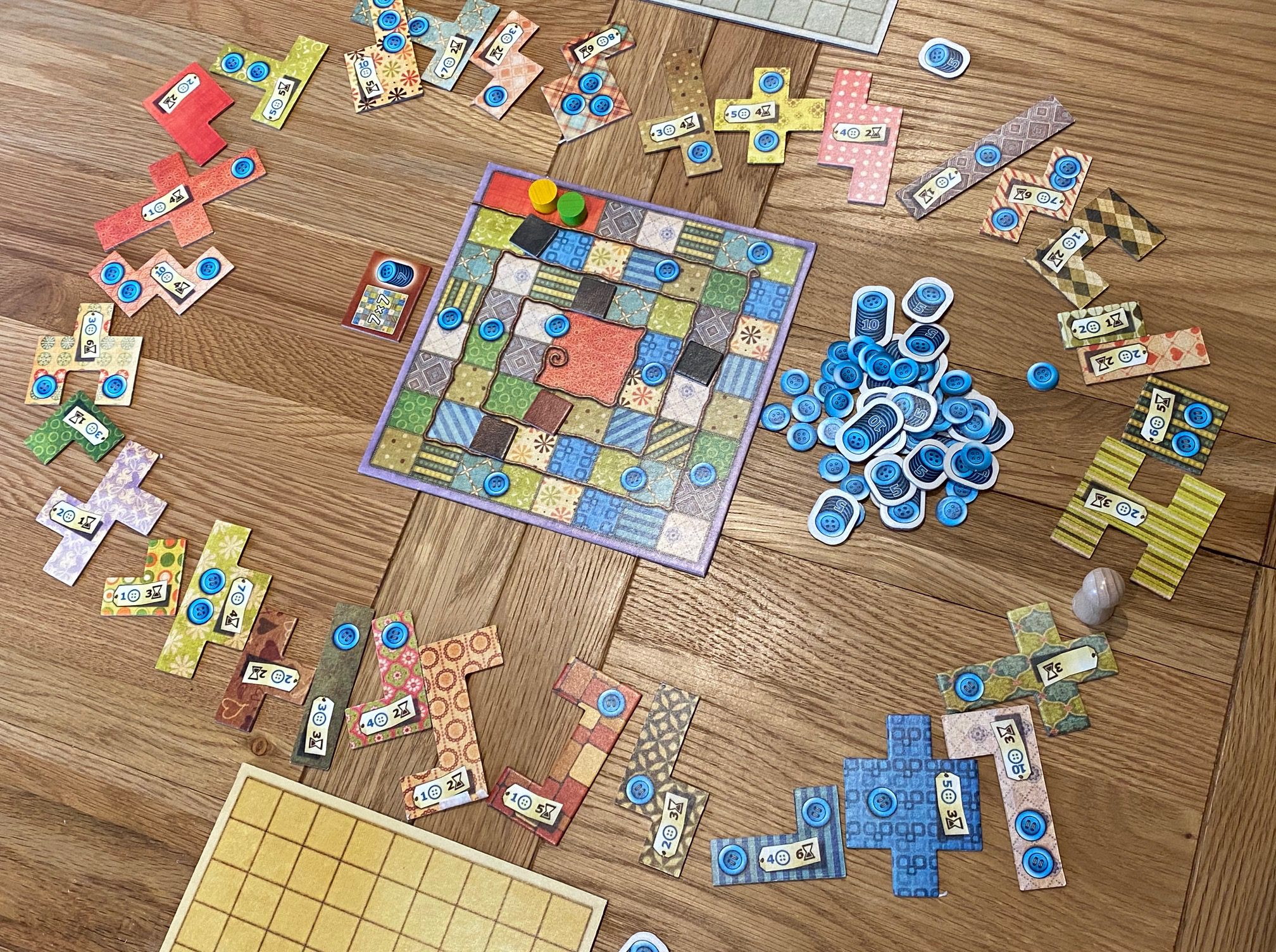 In terms of what you get in the relatively small box, publisher Lookout Games keeps things simple — as they often tend to. There’s a central track board with a pawn for each player, and then each player has an identical blank board upon which to build their quilt. After that, there’s a load of button tokens in different denominations, and then the widely varied pieces of polyomino shaped fabric that make up the quilts. The final pieces are a pawn used to track the players position in the circle of fabric pieces that will be formed, and a brief instruction manual.

I’m the first to admit that I’ve been critical of Lookout Games production in the past, primarily because some of the artwork can be quite boring when it is used in slightly more thematic games. However, here in Patchwork, the art works really well with the theme, and the build quality is fine. My only complaint is not unique to Patchwork — and it is simply that the polyominoes slide around a lot once put in place, and slotting new tiles into existing quilts can be fiddly.

One situation where this is never a problem is with Digidiced’s iOS alternative, which I recently bought because I’d had so much fun with the physical game. I must admit that a digital version of a game like this priced at just £3.99 is quite an attractive proposition, especially considering that it offers a challenging AI (on hard mode) and a fully-functional online ranked game mode. 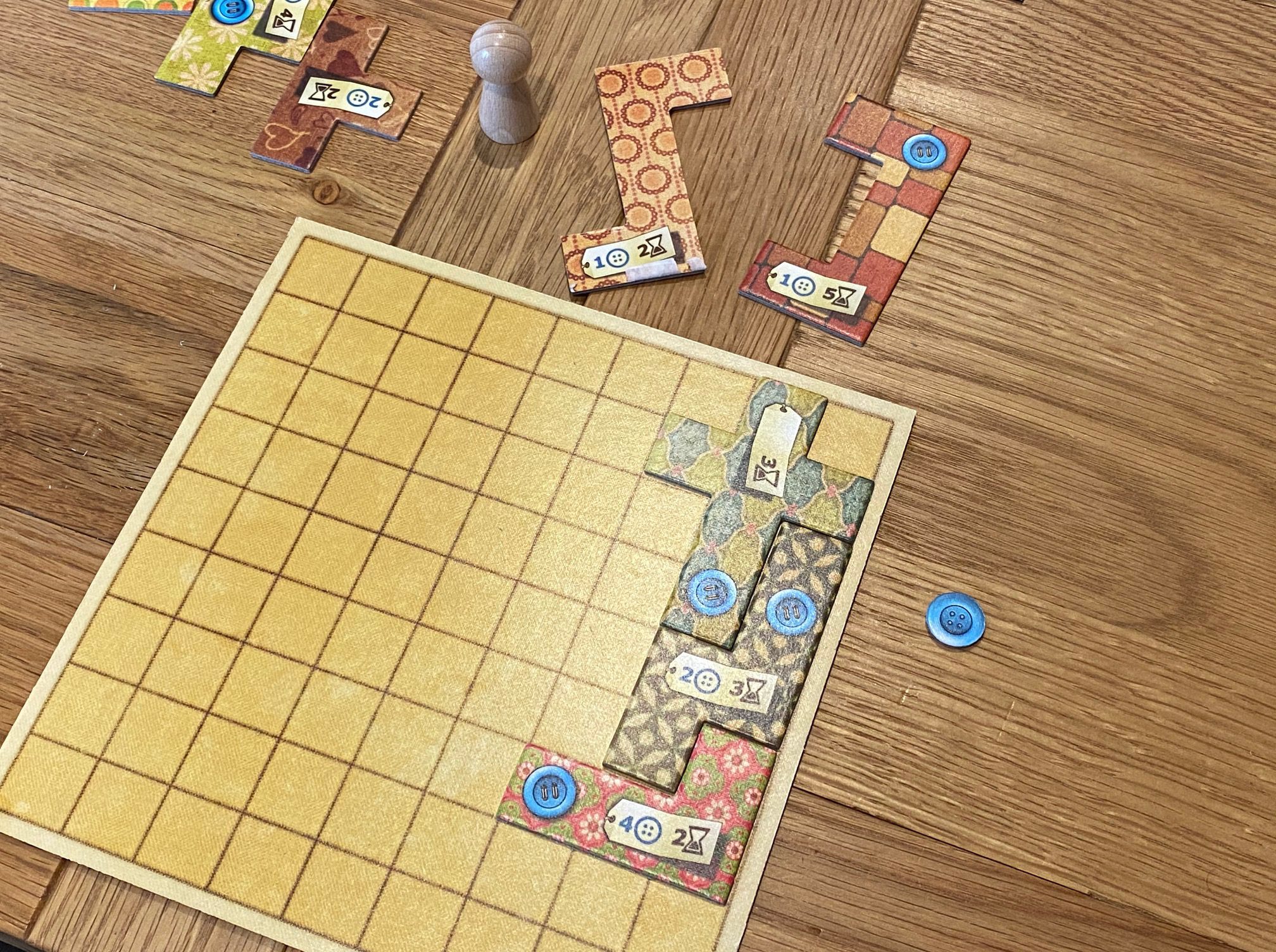 In either the physical or digital implementations of Patchwork, the rules are completely identical, and the contest between two players is exactly what you want and expect from a solely two player experience. This is largely because of how Uwe Rosenberg builds a key balancing mechanic into the track that I mentioned earlier — let me explain briefly.

In short, Patchwork is a game about creating the best quilt you can — and as I mentioned right up at the top of this piece, that means covering as much of the space as you can, whilst also avoiding any holes. If this were as simple as picking a piece and then placing it (which is an alternative mode that I’ve played with my kids) then the task would be simple.

As it happens, Rosenberg knows that more experienced players need a bit more than that to remain engaged with his designs. To that end, each of the “cloth” pieces will be arranged in a circle around the track board, and a value tag will be shown on each one. The value of each piece must be paid in both buttons and in movement — which is tracked on that track I keep mentioning. A player can choose any of the next three scraps of cloth (as tracked by a pawn that is moved each turn).

If a player can afford the cost in buttons and is happy to take the cost in movement, then they will pay their buttons, move their personal pawn on the central track board the required number of spaces, and place the scrap piece onto their board. If they pass over a blue button on the track, then they will take one button for every button shown on their quilt — giving scraps with buttons on them a higher value. 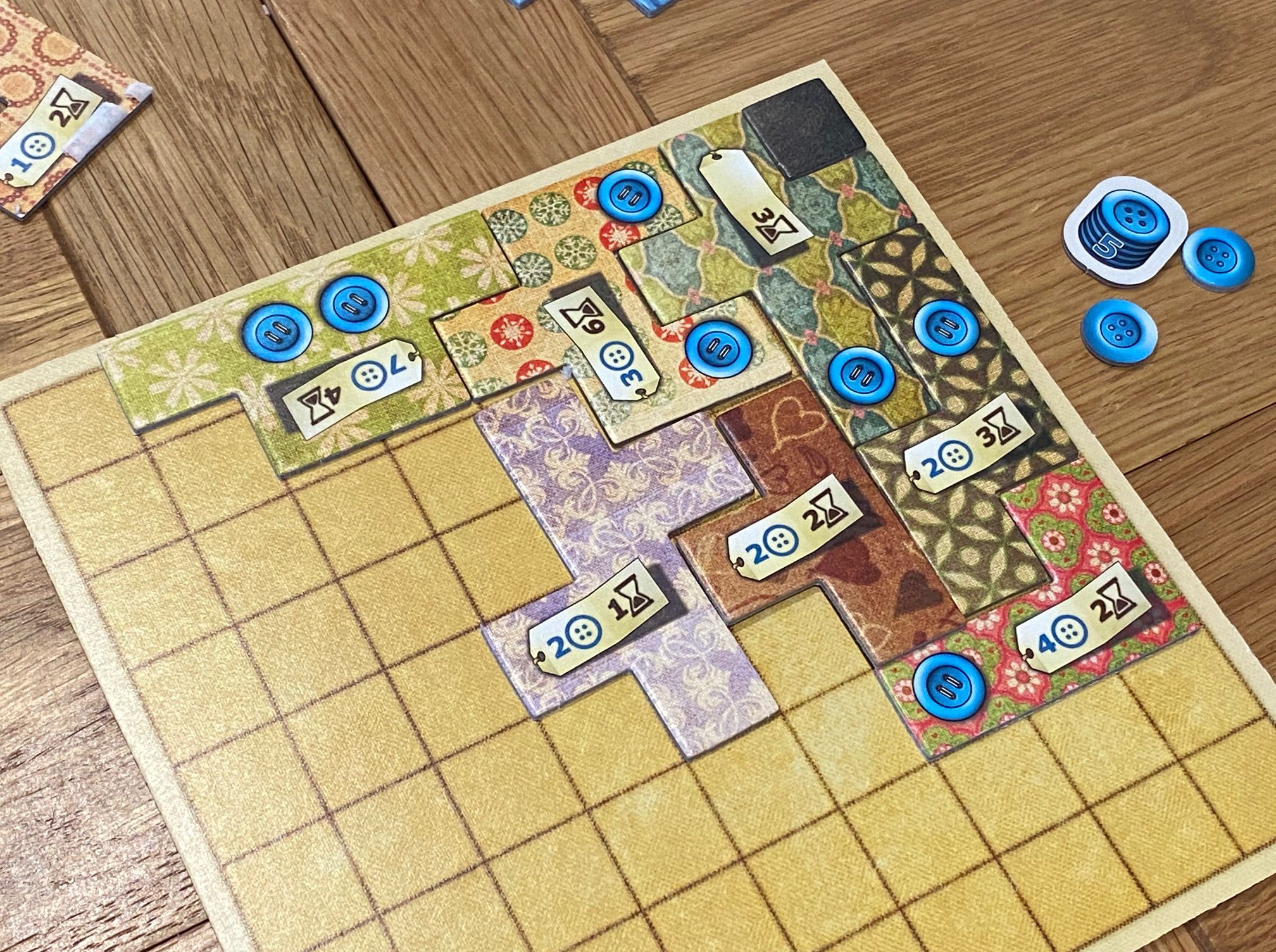 The real balancing act comes from the fact that the player furthest behind will always act next, so there can be a small benefit to taking a low movement scrap and trying to get an extra turn. On some occasions, a player won’t be able to take any of the next three scraps due to a lack of buttons — and in this case, they will skip forward to one space beyond their opponent, collecting one button for each space passed, plus any “button bonus” for passing over a button in this way (just as if they had moved normally).

These mechanics achieve a number of things, when put together. Firstly, they keep Patchwork feeling quite fair. It’s almost impossible for someone to become a runaway leader unless they really know the game and their opponent doesn’t. Given that you’ll likely play with the same person or people over and over again with this kind of game, it’s not often you’ll get away with that kind of difference in experience.

Additionally, and more importantly for long term play, this gives Patchwork a real feeling of “mastery” which involves balancing the collection of buttons, the timing of your turns and avoiding having to skip your turn wherever possible. A perfect game (which is almost impossible) is never having to skip your turn because you always have enough buttons to pay for scraps that you want. On the flip side, there’s a small bonus for players jumping ahead in the form of single squares of cloth, which fill gaps really nicely and are one-time bonuses for those who reach them first.

When you bring this fast paced, clear gameplay together with the simple idea of building a cover with as few holes in it as possible and add in the (almost) hidden balancing mechanics, you have the true epitome of the saying “easy to learn, difficult to master.” Aside from a theme which is dull but highly appropriate, Patchwork is therefore one of the tightest and most engaging two player games that I’ve experienced to date, and it’s an absolute must have for any couples collection.

You can grab a copy of Patchwork from Amazon.