We learned that the Twelve Colonies had developed a small but heavy artillery, firepower-amped Assault Carrier. One which carries a squadron as well. Also, as a result of their research, they managed to construct an extremely tough, heavily-plated Heavy Cruiser. Unfortunately for the Colonial fleet, the Cylons were developing their own countermeasures with a very threatening Tech Cruiser which can both hack Colonial ships, as well as perform small FTL jumps — during a battle, no less! As to not be out-gunned by Colonial Vipers, they also built agile and powerful Defensive Gunships. Both sides also expanded into the world of producing explosive mines: Proximity ones for the Colonial Fleet and Homing-Cluster ones for the Cylons.

In today’s episode, “The Broken Alliance”, we find ourselves peering deeper into the ‘not-everything’s-okay’ world of Colonial politics. The Quorum is not as solid as once thought. There are also malcontents starting to weaken the unity of the Twelve Colonies, cracks are starting to show. People, previously unknown to us, appear with sometimes blatant, contrarian thoughts, while others have more covert intentions.

Battlestar Galactica Deadlock’s latest DLC, The Broken Alliance, adds eight new missions to the game’s main storyline, perfectly integrated. Even though the Cylons still vastly outnumber the Colonial fleet, humans, being as they are sometimes pogees, are every now and then only looking out for themselves — rather than for the good (and ultimately the continuation) of humanity itself.

Released along with the free Endurance update (which fixes, balances and adds a litany of items), The Broken Alliance also adds news ships, of course. We can’t take out the frakkin’ Toasters without researching and building better ships.

For (our) the Colonial side:

First is the Celestra. It carries a supply of drones that can add ablative armor to ships during battle. Additionally, it can make supply runs to both Battlestars and Fleet Cruisers. I got one of these pretty early and it came in extremely handy — although it does need to be protected as it’s not offensive. I couldn’t wait to afford the blueprint.

Next is a different model of Raptor: An Assault Raptor. Rather than ECM and mine-clearing, the Assault Raptor is an offensive weapon used for combat support. Think along the lines of a Viper, but in a Raptor shell.

Finally, we developed a new Minerva-class Battlestar. It’s smaller and more compact than most of what we’re used to, but it packs a very mean punch. It uses missiles and strategic gun placements to go after enemy capital ships… and it does so with large success.

Of course, the Cylons have to try to imitate what we do. Their resupply model is the Hydra-class. It actually carries repair drones and has a fire control system that allows them to help coordinate missile strikes with their other ships. I kind of (actually really) wish ours was more Hydra, less Celestra.

Their new small ship is a Scorpion Sentry. Where our new Assault Raptor is for offense, their Scorpion is a defensive unit, mostly for anti-missile duties. The best part for us? They can’t operate until they have calmed down and become stable after they move. Meaning, they’re not a threat right out of the hangar. I was trying to use Vipers and Assault Raptors to take them out as soon as I was aware of their presence… because I was having to hold my guided missiles and/or torpedoes back. They have a long enough cool-down as it is!

Their final copy-catting was to develop a new Argos-class Basestar (the equivalent of our Battlestars). Except, where we went smaller, they went larger — bigger than both their MK I and Cerberus. With little in the way of defense, they make up for it in offense: huge numbers of hangars and missile tubes. Don’t bother flying your Corvettes around those.

Just a little bit about my favorite parts of the free Endurance Update that came with The Broken Alliance. My number one new feature is that you can now have persistent damage between battles! This means you’ll have to spend even more (Tylium you barely have) in the way of repair costs between fights. Your Fleet Group Daidalos get a few free repairs, everyone else is your responsibility. Do you really want to take a sixteen-point frigate into the next battle? Do you have to because you’re too low on Tylium?

Graphically, it now shows the damage on the ships during the battles…which is cool to see. Then, since I was such a huge fan of the show, the DRADIS sound effect has been added to the minimap. Little things like that greatly add to the immersion, especially for a Battlestar fan such as myself.

There is just so much going on all the time — not only in the crazy battles, but especially outside of the skirmishes. How much Tylium do I have, how many Reinforcement Points do I have — and how much, if any, should I spend?

There’s an assignment ‘over there’ that has a countdown timer on it (certain missions will only be there for a specific number of turns). Crap, I neither have the fleet nor the time to get over there, even if I had one. Going to lose out on a pretty good payout there.  How many ships can I afford to build? Should I buy a couple of smaller blueprints or wait for that Ranger Cruiser I have been waiting so long for?

Most importantly (and it’s been a while), when I’m not playing Battlestar Galactica Deadlock: The Broken Alliance, I’m thinking about it incessantly. What if I would have done this? What if I would do that? Have I already blown the war? Should I start over? Obviously, the replayability is immeasurable. Yes, there is a ‘main story’, but you never know where the Cylons are going to appear. Even if one were, to say, accidentally save scum (purely for research purposes *cough, cough*), the Toasters show up in random places at the end of each turn — which is both fantastic and the way it’s supposed to be. For the battles, remember: you’re always outnumbered.

For now, I’m going to continue this current game to see if I have already lost the war. Early on, I saved up and bought a Battlestar blueprint rather than some smaller things I probably should have, especially that  Ranger Cruiser that I’ve been slobbering over. Better grab some mushies, a little ambrosa, pet the daggit and get on my way. Most importantly though, with the expanded storyline, I never know what kind of political drama (felgercarb) I’ll have to face next. 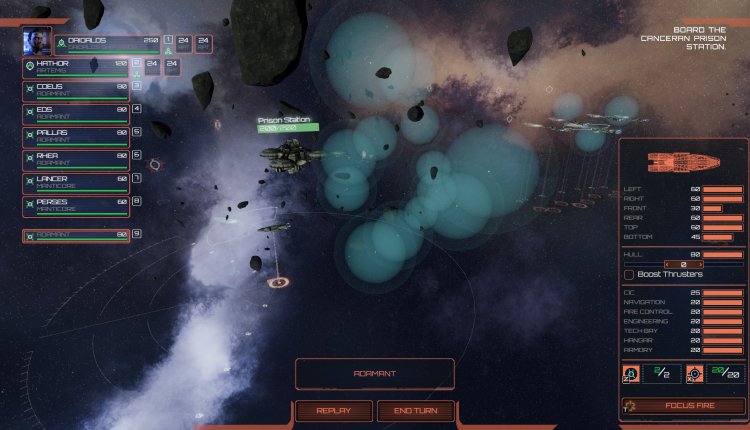 Cylons have a couple of minefields there? 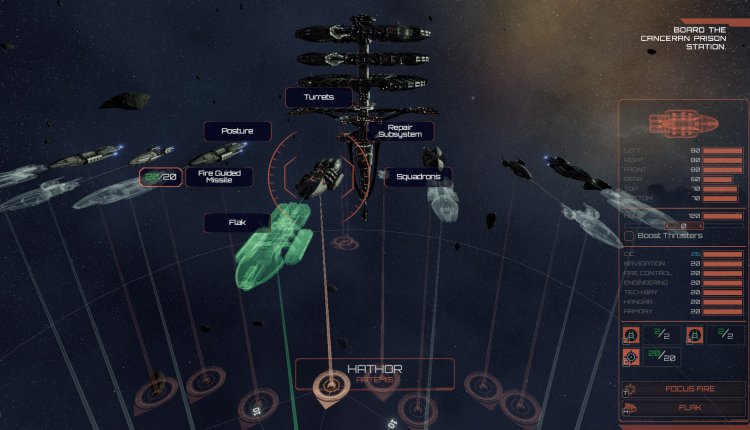 We go in anyway. Bring Raptors! 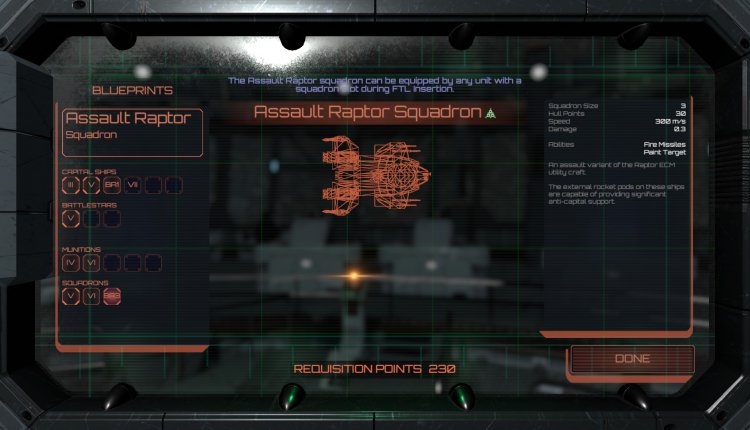 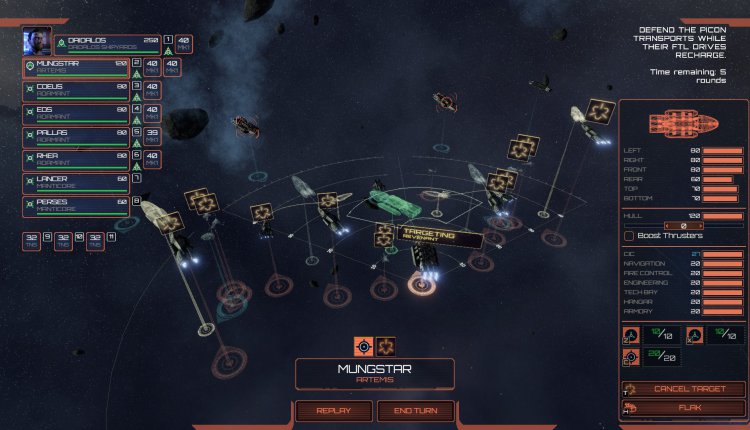 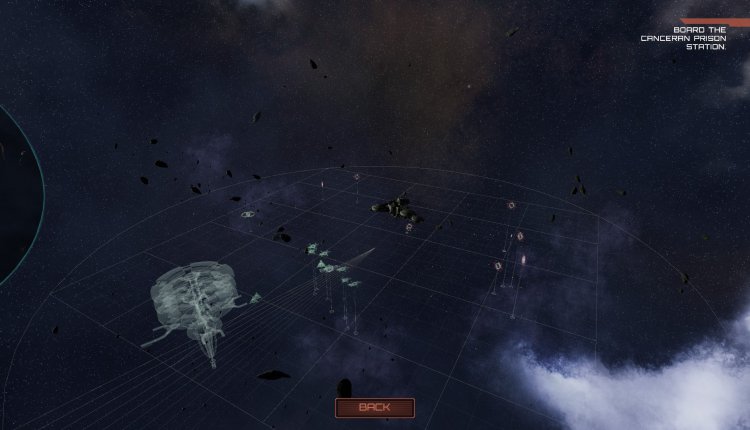