With the ongoing success of tabletop party classic One Night: Ultimate Werewolf, making it a staple for almost any serious board gamer, it has always been a surprise to exactly no one that Bezier Games would continue to look for new ways to expand the system into other universes.

Today we learned that as of July 30th, a new entry in the One Night series will be launched on Kickstarter, shipping is to be expected to start before the end of 2018. With the ominous (but appropriate) strapline of “Save the world (or help take it over…)”, the next entry in the popular series will be One Night Ultimate Super Villains. 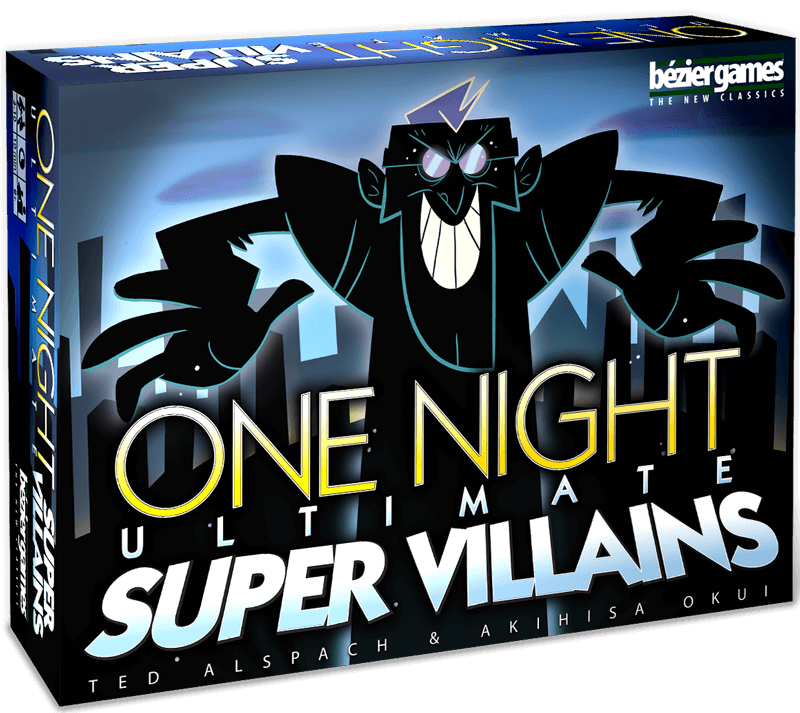 Information is scarce at the moment, but for more info, have a read of the full press release from Bezier Games below:

“Unbeknownst to the citizens of Shady Grove, USA, a battle is brewing while they sleep. The most powerful heroes the world has ever known have converged to stop an onslaught of malicious super villains. The trouble is, these nefarious criminals are hiding in plain sight as residents of Shady Grove, so the heroes first have to find these treacherous evil-doers before it’s too late…
In One Night Ultimate Super Villains™, players take on the roles of heroes or villains, each with amazing superpowers that help further their cause. The vile trio of Rapscallion, Dr. Peeker, and Henchman #7 are intent on getting away with their crimes, while the members of the Super Club Of Overt Powers (SCOOP), are all out to catch them. Shady Grove… maybe even the world… will never be the same.
One Night Ultimate Super Villains is a standalone game in the One Night series that’s perfect for the whole family to enjoy, challenging you to capture the baddies and save the world! Super Villains can also be combined with the other entries in the series – One Night Ultimate Werewolf, Daybreak, Vampire, and Alien – to create even more fun and chaos.
The press release goes on to confirm that whilst the companion app is not mandatory for play, it does include narration from popular Dice Tower contributor Eric Summerer. Personally, I’m also hoping for atmospheric music, although I don’t think you can hold Bezier Games accountable for whether or not my whims become part of the final product or not.”
If you’d like to be invited to the Kickstarter as soon as possible, feel free to sign up to the Prefundia page, here.
Bezier GamesOne Night Ultimate Super VillainsOne Night Ultimate Werewolf
0
Share FacebookTwitterGoogle+ReddItStumbleUponEmail