Cyberpunk 2077 is more than just a techno-savvy RPG with a strong message against powerful corporations and their reach. It also delivers an awe-inspiring showcase of a semi-believable future filled with the grunge of holographic advertisements and the gritty realism of greed rendered into a tangible form. Mind-bogglingly complex in its architecture and design, the true hero of Cyberpunk 2077 is its attention to detail and the enormous mega-city that supports its twisted vision of beauty and power.

It’s been more than eight years since we first heard about Cyberpunk 2077. An entire console generation has come and gone, and throughout that entire timeframe, the world has completely changed, for better or worse. Speculation was rampant, but whispers under breath about its progress were as rare as a white whale, and fortified with enough magic and wonder to actually achieve such mythical status. 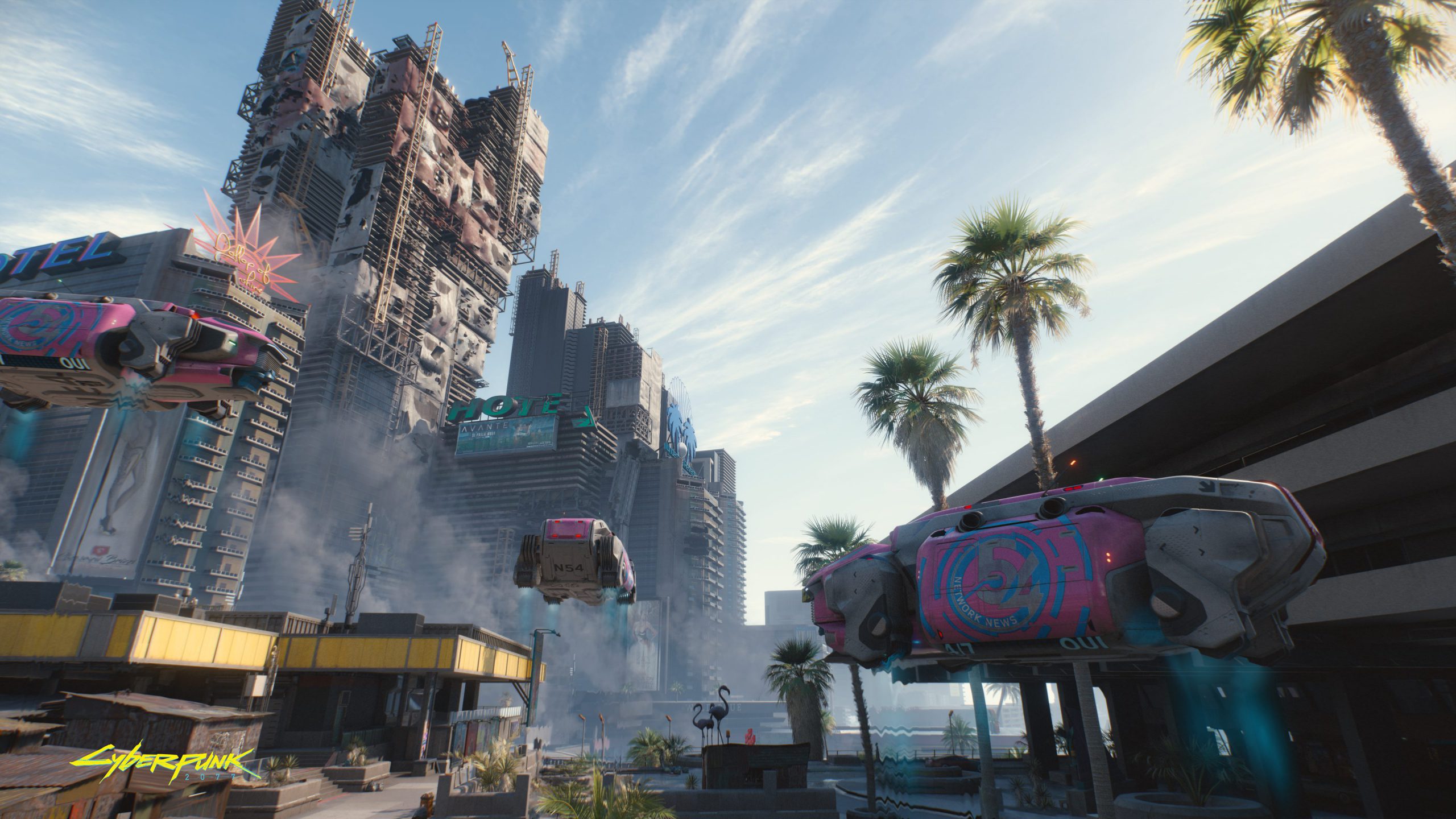 When 2018 finally rolled around and we saw footage of this elusive title, the hype for it was way beyond what a lowly independent studio could create, and yet, it continued to deliver visually and often promised gamers the possibility of a future-based playground where you could customize anything and everything to suit your preference of play. While the gameplay itself is quite polarising in its acceptance, there’s no denying the art and brilliance of the vast megalopolis that is like a beating heart, pumping with violence and greed.

First and foremost, Cyberpunk 2077 needs to be commended for its story. I personally felt an emotional connection towards more than one of its digital characters and cared enough to speak to them, make dialogue choices that I felt best suited my relationship with them, and made me actually want to find out more about them by pushing the story forward. The gorgeous character models with realistic skin and intricately-textured clothing are paired with fluid, believable animations to achieve a new sense of realism we rarely see in non-playable characters these days. This level of detail is only for the characters you can actually speak with through dialogue choices, but each one has a specific personality, and depending on how they affect a player, can really imprint a memory of these digital entities in your mind. 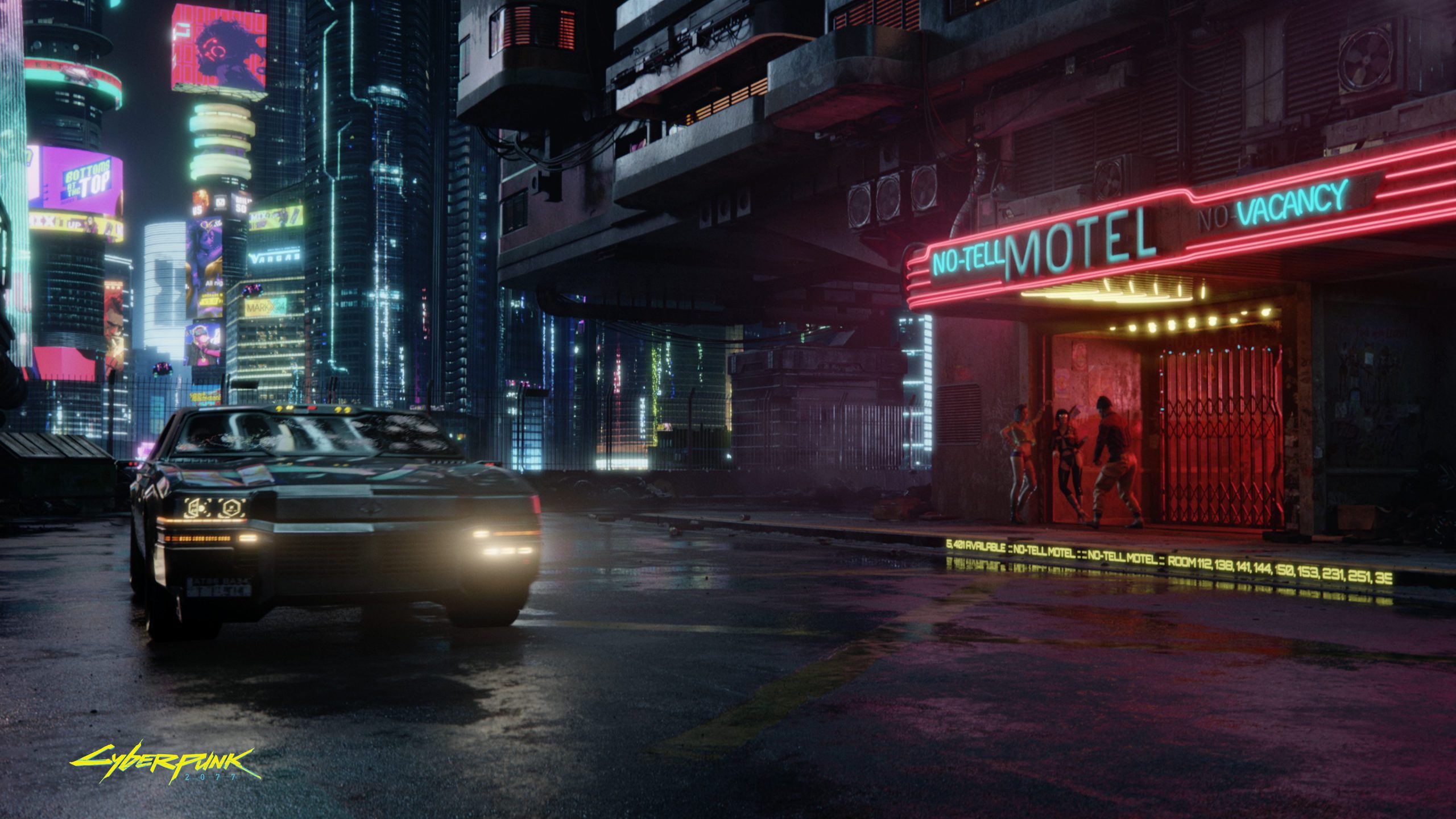 As a mercenary, you’ll be in a lot of dangerous situations where your abilities and techno-skills can get you in and out of places where you might not exactly belong. Seen as a status of power, body modifications are all the rage in Night City, and they can physically alter your strength, speed, and perception resources in order to accomplish the riskiest jobs that your various fixers will set you up with. This power is a scary thought to process, blending flesh with a machine for non-practical applications, and really shows a darker side to the future: self-mutilation for the sake of status. While this may not exactly be a testament to what is in store for humankind, it’s certainly a warning as to what to watch out for.

Night City is a living, breathing city divided into six varied and diverse districts. Each one has its own style and culture and is home to a specific faction, each with its own turf and rules to abide by. Stationed at the lowest southeast point of North California, the megacity is a stimulation buffet, ranging from towering holographic ads to the seedy suburbs where an illegal braindance — a virtual simulation that takes over your senses — is merely a credit-transfer away. The districts offer many unique areas to enjoy, and traveling between them takes time; time spent behind the wheel of one of many iterations of vehicles. 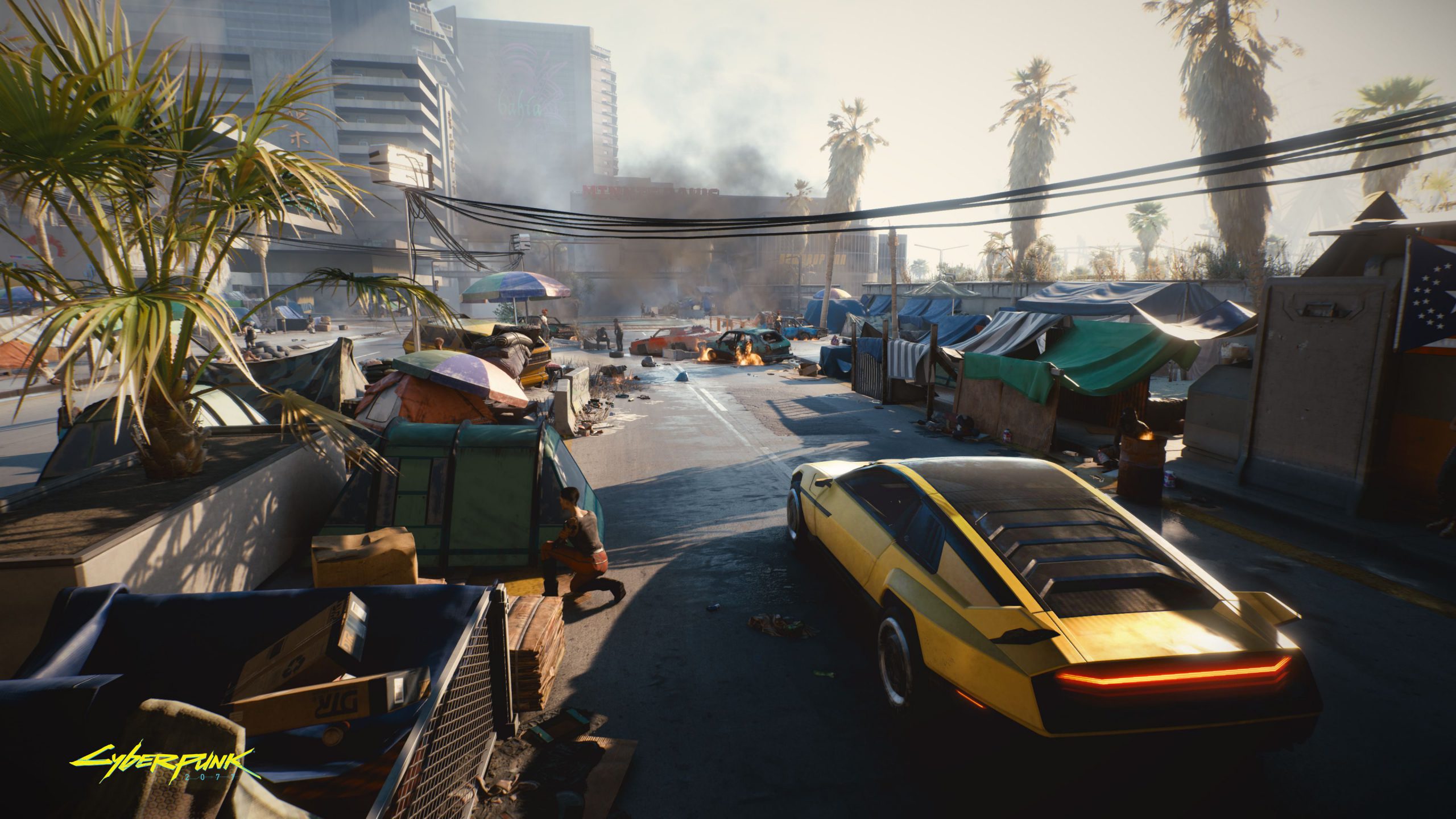 Ranging from cars to trucks, motorbikes to tanks, there’s something for everyone in Night City. Each vehicle handles accordingly and has physics to match its type. A speedy ride may make traffic seem like a blur while you are weaving in and out of it but requires expert handling of braking and steering to not end a smear on the pavement. Picking your ride may not be a huge deal, but there’s a sense of pride in owning something you enjoy driving. Being able to experience your drive in first-person feels great, and offers a customization opportunity that many might neglect in their first hours with the game, but that’s just one way to really make the city feel more like home.

A game of this magnitude would otherwise feel empty if it wasn’t for a matching soundtrack to fill the empty air with more than an electric glow, but there are nearly twenty hours of music in this game, and the effort to create something that fits the mood of each environment was tremendous. Sure, there’s plenty of fast-paced, heart-pounding synthesized tunes to enjoy while you are gunning down your mark, but beyond that, there is a full set of radio stations to bop along with, offering nearly any genre imaginable. It’s an impressive amount of music, and it really gives you a sense of scale in the amount of influence from various artists and styles that incorporate to fill this world with a literal pulse to it. 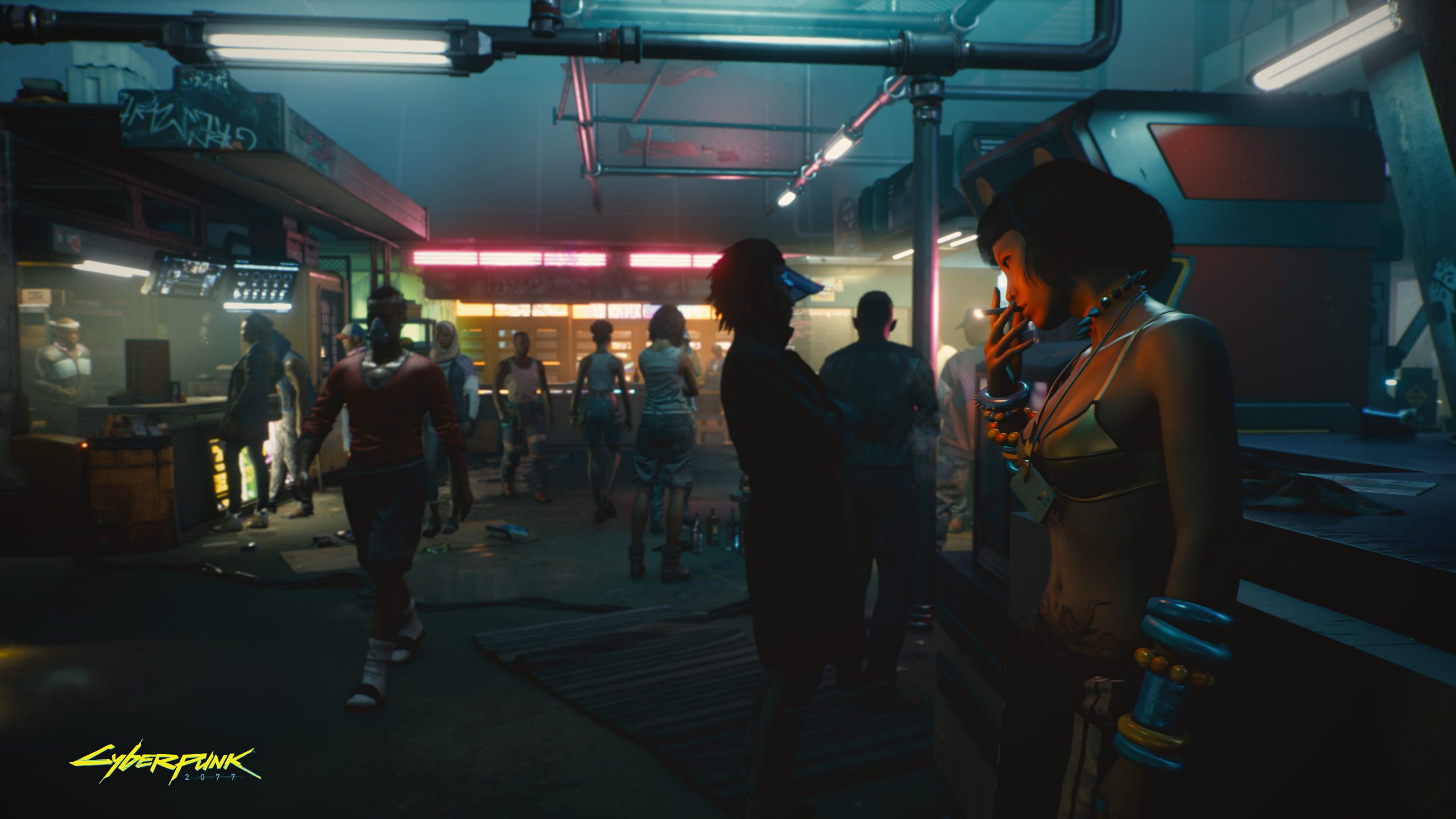 When you stop for a moment to take it all in, that’s when Cyberpunk 2077 really shines. Beyond the quests and missions, beyond the glimmer and gloss, there’s a literal work of art in the design of the environments and lighting of the world around you. Digital city design is certainly a tough job, but not only did they nail the planning and execution, but they also made a believable space where the cybernetic story can feel free to exist and flourish, even. All the area that is walkable or driveable feels like it belongs, and when it’s not directly copying an existing, real-world location, that’s an insanely impressive job well done.

There are lots of things that can be said about the game itself and the condition that it released in. I feel that looking beyond the glitches and shortcomings brings into focus a gorgeously gritty and hauntingly harrowing take on what the evolution of mankind may one day become. The artistic detail spent to render this digital playground of madness and mayhem absolutely must be commended, as all of the arts intertwine into this awe-inspiring testament to the future of what video games can accomplish. There may be some polish to take it to the final result of the game that CDPR was trying to make, but the breathtaking world is already alive and begging you to explore its temptations.

Cyberpunk 2077 is available now for Xbox, Playstation, and PC.

Blightbound – An Action RPG that doesn’t pull its punches

Alex Kidd in Miracle World DX punches as hard, and short, as the original