Only a few weeks ago when I previewed Antihero, it already felt as if it was close to complete. The game lacked a campaign mode, but it had a decent (and useful) tutorial, a single player skirmish mode and access to online play against other previewers. Lead developer Tim Conkling and his team have been busy though, and the updates have been more or less continuous over the past few weeks and include a bevvy of minor tweaks and changes that most people won’t notice, as well as major updates such as the introduction of a complete campaign that folds in the tutorial missions in a more natural way.

All of this hard work has resulted in the official release date for Antihero drawing iteratively closer, to what appears to be the final date of July 10th. This makes total sense to me, because I felt that the preview build was already very solid, very stable and quite feature rich. That in itself poses a challenge for me, because it was very hard not to write the preview as it were a review, but at least in the near-final build I now have access to, the game includes the campaign which is where I’ve focused my attention over the last few days. 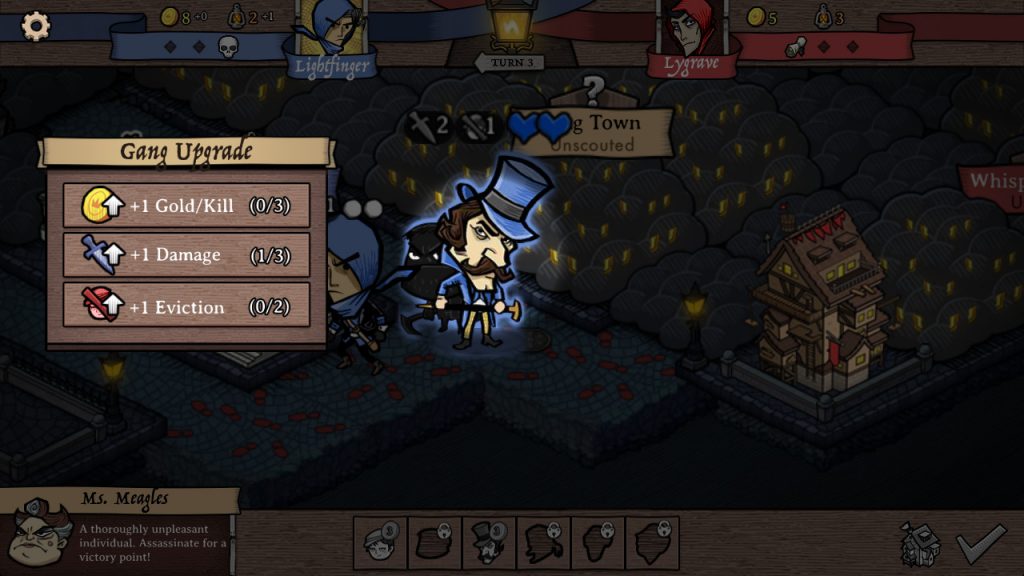 If you’d like to read a more detailed overview of the mechanics of Antihero, you should start by reading my preview which can be found here. For the sake of avoiding repetition, I’ll describe the game mechanics more briefly here, whilst still hopefully providing any newcomers to the game with a reasonable base of understanding. Broadly speaking, Antihero is a turn-based strategy game that feels a lot like a board game, and involves players taking on the role of a master thief as they attempt to establish their criminal empire within each of the procedurally generated districts that make up the game world.

Players only have access to their master thief character at the beginning of each game, and using an in game currency called lanterns, they must upgrade their capabilities and resources iteratively by interacting with the world. First, you’ll research cooking to generate an urchin, then you’ll place the urchin in a bank or trading house to get either cash or lanterns. Then you’ll upgrade your weapon, or hire a gang, or expand the number of actions your master thief can take. Just as you spend lanterns on accessing upgrades, you’ll spend cash on hiring new folk, and they appear on the board and act out the will of your master thief.

Whilst you upgrade and expand your forces, your enemy will be doing exactly the same, and one of the things I like most (and even liked during the preview) was how Antihero can be approached in so many different ways. In each game, you’ll be tasked with obtaining a number of victory points (usually five) but it almost never matters which ones you target. Do you want to specialise in assassinations? No problem. In bribes? Focus on gathering cash and buy bribes through the upgrade system. Board control? Sure, every church with three urchins in it results in a victory point through leverage over the clergy. 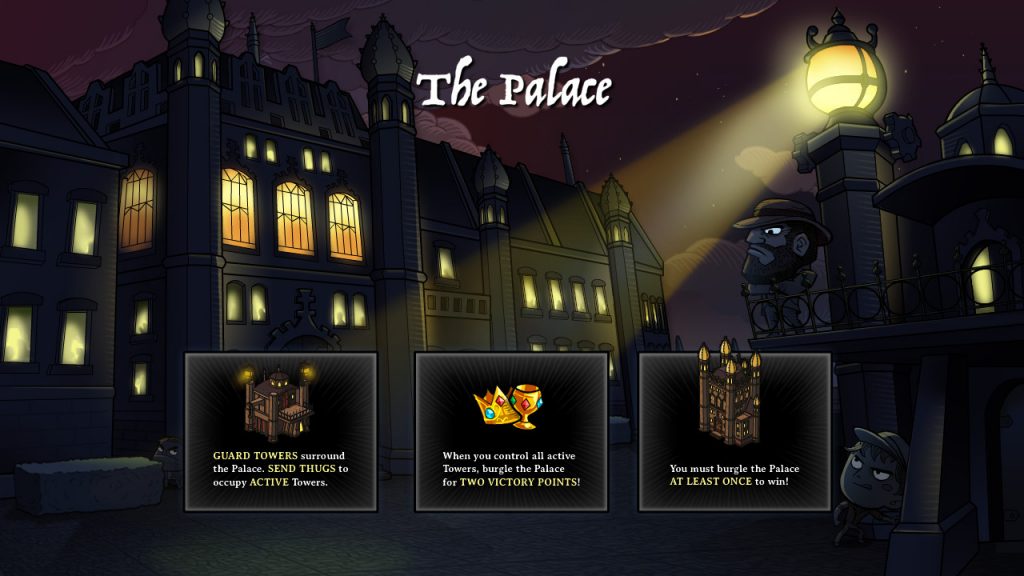 These various ways of winning (and the fact that it is nigh-on impossible for one player to dominate every area of play) ensure that no two games of Antihero are the same, and no strategy feels overpowered. A church filled with urchins (clinging to a vital victory point) is vulnerable to the Truant Officer, who can wipe all three out in one move and doesn’t appear on the board, so can’t be intimated by a gang or assassinated. Similarly, a gang could evict the urchins one by one (or quicker if the gang is levelled up) but can at least be seen on board and murdered if you have the chance. Even other urchins, if the opponent has a levelled up Orphanage, can evict other urchins. You can repel these threats by trapping the building, or you can use your own thugs and gangs, but all of these things cost money and actions, both of which are valuable.

This kind of thought process about defending what you have (or not) and expanding your range through scouting and taking over new buildings is another thing I like in Antihero. There’s a genuine feeling of risk and reward to make every decision feel important. If you have three buildings full of urchins but only enough money to place one bomb and one gang, where will you put them? Which will you prioritise? These decisions are made hard because as I said earlier, there is no outright best strategy – money and lanterns are equally important. Other buildings provide bonuses like extra health, reduced cost or similar, and if your plan for the next turn is to floor the board with powered up thugs, maybe your oddfellows club should be your number one priority?

These themes are present throughout the campaign missions, and even beyond the tutorial missions, the game clearly wants to teach players about how the game works. The early missions teach the mechanics, but after that, the next few missions teach strategy, and it’s great that the AI seems to have behavioural preferences that drive their behaviour into one or another area of focus. That’s both welcome and unusual. Of course, this is really just to prepare you for online play, which varies wildly by opponent, but as Antihero is inherently a fairly niche experience, the standard of opponent is typically high. Again, the inbuilt balance makes it very hard for someone to fail miserably at Antihero, assuming they have at least mastered the early missions. 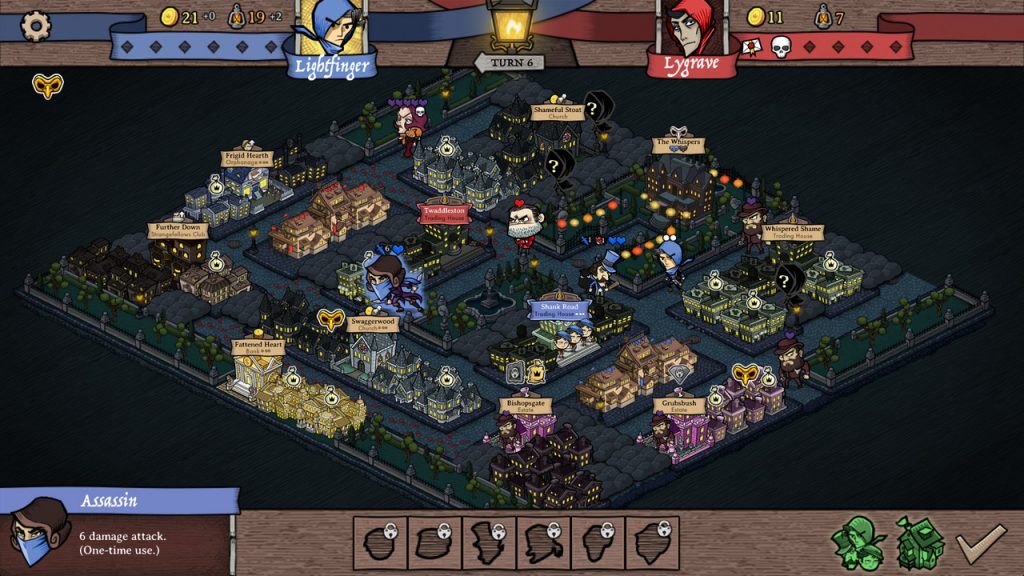 And so where I thought Antihero had potential when I previewed it last month, I now know that it has been matured into a really neat, finely balanced and reassuringly solid turn based strategy come board game. It’s quite deep and most games take a good twenty or thirty minutes, but even so it feels well suited to play on laptops or hybrids when on the move. I really enjoy dropping into a mission when I don’t have time for a bigger, more involved game, and yet Antihero is always a taxing, tough experience that really rewards success. Few games hold my interest for several weeks, yet I’ve never really stopped playing Antihero between the preview and this write up, and better than any other measure, that desire to keep playing confirms what I already know: that I really like Antihero, and I think you will too.