Above Hands On — Endless Ocean, Islands and Giant Sea Monsters

Nestled in the far corner of EGX Rezzed’s Leftfield Collection, away from the competitive shouting of Regular Human Basketball and the recognisable chimes of Wobble Garden was a small game I hadn’t expected to run into so soon in its development: Aerial-based action adventure title Above by Danish developers Mighty Moth Games.

I’d seen a few screenshots floating around my Twitter feed of the plane-explore-’em-up in the weeks prior to EGX Rezzed, showing off lovely-looking lighthouses, wooden bridges and village buildings clinging to the surface of tiny tropical islands. Encompassing everything was a vast, Carribean-blue ocean stretching to every horizon. 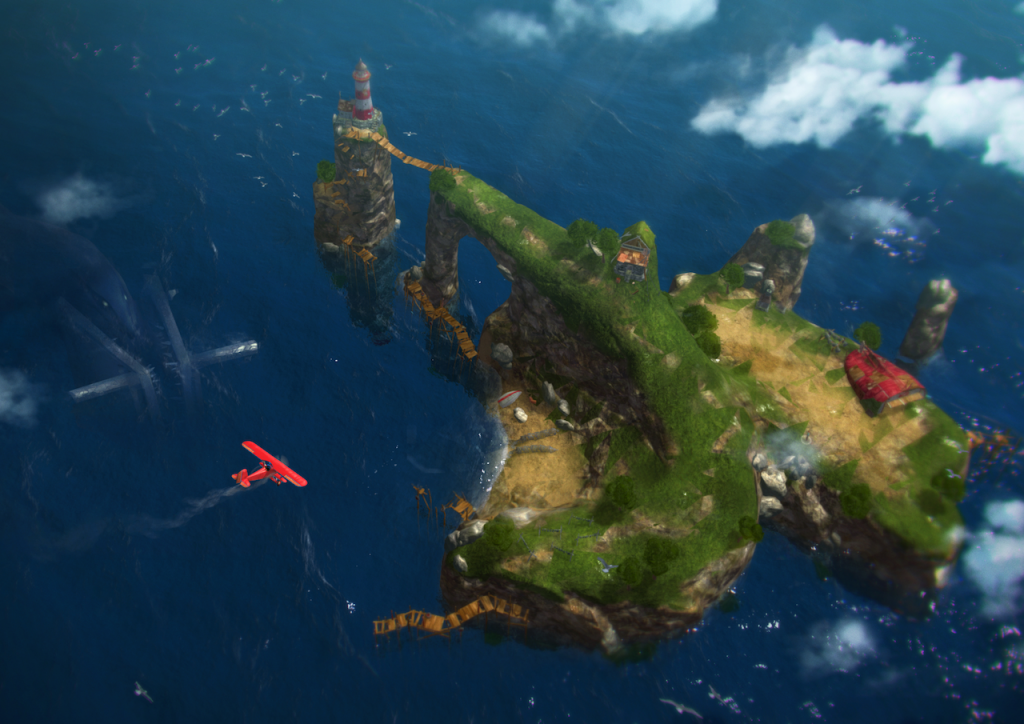 I settled onto the oddly-shaped conical stools that every gaming event seems to have, popped on the headphones, booted the game, and jumped straight into paradise. There was a relaxing sense of freedom as I glided above the world, gently exploring and collecting scrap metal from the shores of islets to modify my plane.

I found that I could change the wings of my aerial steed for better control, tinker with the engine to fly faster or strap some useful gadget to the bottom; all to explore more of this flooded world and its pleasant-looking inhabitants at a leisurely pace.

The art style of Above is best described as something like those 70’s postcards from exotic destinations; a deckchair with an umbrella-laden cocktail nestled on a bright, empty beach, all overlooking an enviously beautiful ocean, sparkling in the kind of sunshine which produces lobster-red tourists, complete with “Wish You Were Here!” screen printed over the vista.

Quaint villages, ruined churches and lighthouses stand amidst bright tropical foliage, the cliffs frame beaches which are invitingly yellow and clear. The ocean — the main centrepiece of this world — lazily rolls and laps at the shores. The sun glitters off the waves and crests, altogether creating a wonderfully serene world to explore. 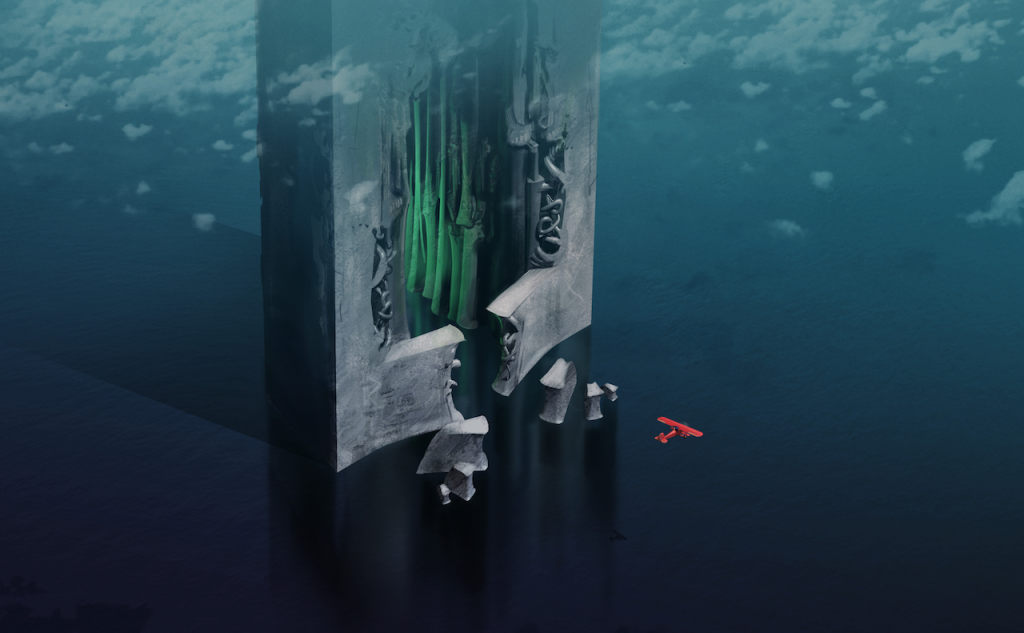 The flight controls were fluid, meaning that drifting back and forth over the glistening jewelled ocean was pleasantly arcadey, rather than the physics-based wrestling match that I’d been anticipating. There was an issue with the game’s perspective with regards to reading your height that I kept encountering. Whilst attempting to lower my plane’s grappling hook into the water so I could whip up some sweet scrap metal for a new engine, I’d go from “nowhere near the surface” to “suddenly a submarine” no matter how gently I nudged the plane towards the blue expanse. Obviously, this is an early teething issue which will no doubt be worked out as the game continues along its development roadmap — but my plane rudely interrupted the ocean’s fauna enough times during my short playthrough of the demo to impact my overall impression of the game.

I spent a while exploring the world which the game had painted, completed simple quests to update my plane and got out and walked around the landscape of the tiny airfield I called home. I flew around the crumbling church, over the tropical foliage and above the endless sea, enjoying the serenity of the experience.

Then I had to drop sheep entrails into a giant skull-shaped volcano.

The Rest Of The Game

I was quickly reminded of the marketing blurb I’d read before about the giant sea monsters, pirates, murderous cults and evil underwater magic portals which would populate the majority of the game. Unfortunately, the demo’s only outlandish thing was the rocky skull with lava pouring out of its eyes. Flying into the black maw ended the short demo, and teasers of the battles to come adorned the end screen.

Any game which can captivate me with less than 10% of its actual content is absolutely a game to keep a close eye on. With the estimated release date of early 2019 on the horizon, it won’t be long before everyone can take in the sights, sounds and experiences of cut-throat sky pirates, screaming sea monsters, and cults which revere a giant evil beneath the waves.

All whilst enjoying the lovely view, obviously.

Above is a work in progress by developers Mighty Moth Games, and is estimated for release in early 2019.

You can find out more about the game over on Steam.