Yu-Gi-Oh Duel Links is a game developed by Konami that is based on the original series Yu-Gi-Oh. Konami made the mobile app based on duelling against people, bosses and NPCs.

Throughout the app you find that you have different levels for each character that you play as. You’ll play as many of the main characters from the original series and all of them reach up to a maximum rank of 30. With your character chosen, you’ll start to go in stages throughout the Duel World, with each of the stages coming as different unlocks and with harder NPC’s and bosses as you progress. 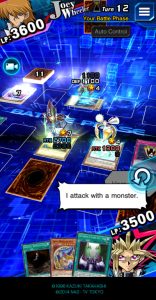 To complete each stage, the goal is simple, you must complete the challenges that are set for each of the stages, and when those challenges are completed you’re given rewards. The important aspect and the main focus is of course the cards.

There is a shop in the game that allows you to buy 3 cards in one pack, and to buy packs you must be rewarded gems to buy packs. Gems are easy to collect but they also don’t come in large amounts, meaning that you’ll find yourself working hard to gather up the gems. One pack of cards costs 50 Gems, and out of those cards you can get either a neutral card, a rare card, a super rare or an ultra rare card. Obviously, going by the name of the type of cards, the cards that are rarer will work more in your favour if used correctly during a match. 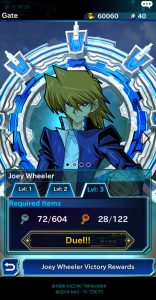 You have 3 types of cards. Monsters, Spells, and Traps. Monsters sometimes have their own effect that makes them stronger or allows them to do some fancy moves, such as sending a card back to an opponents hand as an example. Spell cards help you in many cases and can become a life saver. One of the cards being a Fusion card can bring a monster to the field, either that there’s even a card which allows you to inflict damage to the opponents life points. Finally, traps are used to surprise your opponent, with cards allowing you to pull tricks such as taking a card from their deck or even their field.

You have life points assigned to your character, and these are very important to keep an eye on as these act as your health. Once it reaches 0 you’ll lose. Thankfully though, there a whole range of deck building, and customising your decks available, and you can take quizzes to earn those Gems to grind those packs and get your hands in even better shape.

My experience with this game has been amazing. I’ve gone from not understanding one bit about the game when I first picked it up, to finding myself taking a liking to the game and becoming more knowledgeable with the cards and understanding what methods to use. 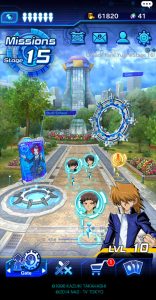 There is a matchmaking system that pairs you up with other players of your skill as it’s incredibly skill based, this ensures that the duel is kept fair. While that’s all well and good though, luck comes into duels sometimes, which can make or break a match. I usually find myself running a deck with quite a lot of high level monsters which can’t be let out until further on in the game, but there have been times where I have been crushed by the opponent due to not getting those cards that I need. I find that gathering Gems is a grind, and that it’s going to take a couple of levels and maybe even taking some quizzes to even buy one, a system that I seem to like. Giving a system like that makes me set milestones to how many packs I can pay for, and how long will it take and so on and so forth.

Duelling the NPCs and bosses will be easy at first but they do become a lot more difficult as time goes on and they will improve their deck over time, resulting in you feeling overwhelmed, like they have conquered the game, but if you’re lucky you can pull it back and manage to win. When I open the packs within the game, I feel as if I am opening it in real life because the pack fills your phone and it’s like holding a pack of cards in general; something I think is great.

Another great thing is that it’s not a battery killer! I’ve found myself sat around, playing for hours without even worrying about the battery. Usually I’m not worrying because the battles are very intense and can be very fun and gripping because you don’t know the next move and what card they’re going to use, you just don’t know whether they’ll do you any good, or just bring you to your doom.

This is certainly a mobile game I recommend giving a try, it’s available on both iOS and Android.