And so it is that we reach the end of our coverage of the Yorkshire Games Fest 2017. But it’s not over until the fat lady sings! Or, er… until we finish telling you about all the games which we’d already reviewed, we didn’t play or which were quite short. Although last, they are by no means the least of those on display at the festival.

Being the Yorkshire Games Festival, we of course have to start off with the grand and wonderful Yorkshire Gubbins. Having picked it up before we even heard of the festival, we decided to let others have a go on the day, but made sure to compliment developer, designer and… okay, just check the credits… Charlotte Gore for contributing to the fantastic voices (yes, voice acting as well — we did say to check the credits).

Yorkshire Gubbins is a thoroughly local point-and-click adventure centred around the fundamental mechanic of verbs and how to use them. In this way, the Yorkshire dialect gets interwoven with its landscape and environs in a comical adventure both mundane and bizzare. Look out for our review, which will be published as soon as we finish playing and get over our hankering for special meat pies.

If you don’t even want to wait for that, Yorkshire Gubbins is already available on Steam, so go ahead and check it out! 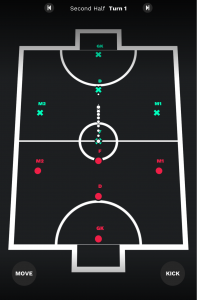 Occupying one table was Advance Soccer, a free, turn-based, five-a-side football game developed by studio Gentlemen of Science. With no great knowledge of football and the developer’s quiet warning that it might take a while to explain tugging at our ears, we decided to let more qualified people have a go at the festival, but Dann has jumped in for us, so look out for a brief article from him soon.

Advance Soccer is available on the Google Play and Apple stores.

While we were there, though, we played another of Gentlemen of Science’s games: a short and simple app called Nutcracker where, through careful timing, you drop Santa off his sleigh and down chimneys. Completely free with neither ads nor microtransactions, it could be a cute bit of fun for kids the night before Christmas.

Nutcracker is available on the Google Play and Apple stores.

This particular title was left unplayed neither because we were already reviewing it nor because we didn’t consider ourselves good enough to try, but simply because we couldn’t get to it. Child after child queued up for virtual reality fun and the promise of free sweets and, well, we kept letting them go first. It was non-stop. Then we felt awkward for looking like we were just standing there watching kids. Then we sidled away. That probably looked worse.

In any case, in the three or four games we watched in their entirety, plus glimpses caught throughout the rest of the day, it was easy to figure out what was going on.

Hyper VR Party Ware is, as its name suggests, a virtual reality party game from Shuttershade Studios. Available on the HTC Vive and Oculus Rift, it features a series of challenges, from throwing darts and shurikens to baseball and scanning till items, with a command to do squats near the end (which is funny to see from the outside). For those wondering where the ‘party’ comes into it: Hyper VR Party Ware will be available for up to six local players.

Every other game on display at the Yorkshire Games Fest appeared within a section titled ‘Videogames, But…’, a series of games and short experiences meant to make people think twice about what they traditionally consider a game. That said, there may have been other titles on loan in this area which didn’t quite belong under the title, as Figment, a much-loved title we have reviewed before, was among them.

Two of these small games in particular caught our attention: one where you dragged your finger along the screen to build sandcastles before the waves made them sink back into the sand and one (available on Steam) where you got given a television to fix, tuning each until the picture was perfect before moving onto the next, aiming to fix as many within a time limit.

It is this, alongside gaming history exhibits and the atmosphere of the museum, which perhaps gives the Yorkshire Games Festival a different feel to other events. It feels more complete, somehow, with past familiarity and future weirdness blended in with the present. Without a doubt, if life allows, we will return next year.