Figment – A Painterly Adventure Into The Mind

Figment first caught my attention during Rezzed back in April of this year. My curiosity was instantly piqued by the game’s whimsical colour palette and soundtrack. I couldn’t resist diving into the surreal landscape with the game’s protagonist, Dusty; who has a pale cartoonish face with a massive red nose, carries a wooden sword, and runs around in what looks like a spacesuit onesie designed for a half-rat-half-man. Oh, and he’s accompanied by Piper, a bird who sounds like she’s eaten a sack of sugar and inhaled too much helium. I left the demo anticipating the game’s release.

Fast forward to the game’s launch at EGX six months later, in September 2017, accompanied by a live rendition of the theme song, cupcakes and prosecco galore, where it finally burst into the world.

Time to begin the musical action-adventure, which quickly turned out to be more of a puzzler. The game opens with the sounds of a car crash and you’re introduced to the initially grouchy (and likely alcoholic) Dusty and eternally cheerful Piper.

When a nightmare-creature steals Dusty’s scrapbook, Dusty gives chase leading to a quick introduction to combat. You’ll quickly discover that combat is a relatively simple affair of rolling around and mashing the attack button. The gameplay actually focuses on puzzles in the vivid landscape of an increasingly fragmented mind. Whilst solving puzzles to reach the next level can become a little repetitive, there is plenty to keep the player engaged. Knocking on doors which never open generates unique reactions from unseen inhabitants. Each realm of the mind has its own design quirks. Collecting softly glowing orbs unlocks memories. Fun little things to do are scattered across the levels, such as hitting guitar plants that twang, and germinating seeds to create leafy bridges. 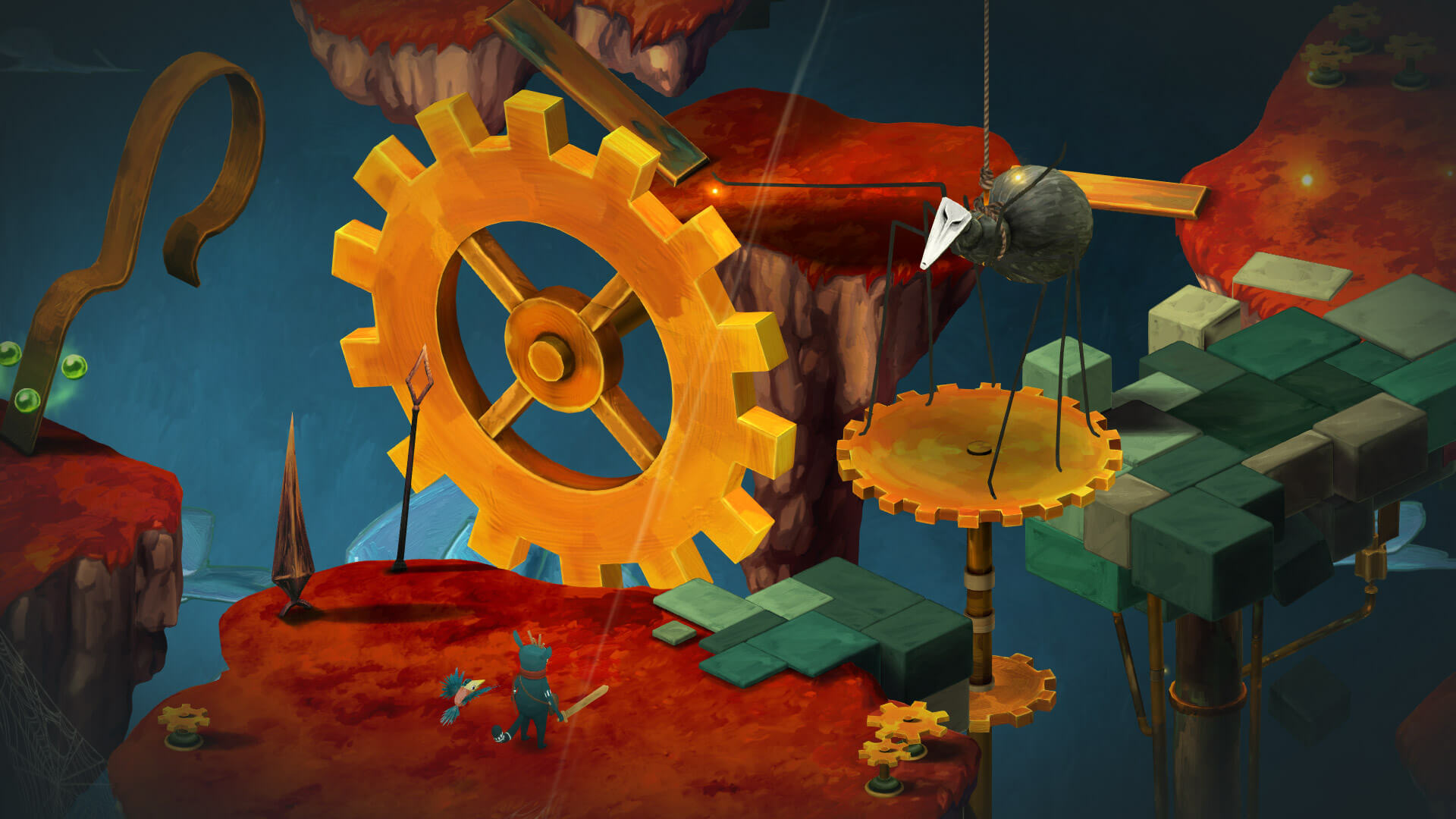 The game has its gripes, however. One of the main things which bugged me was the lack of contextual actions; for example, one of the puzzle mechanics involves finding certain coloured batteries and placing them in an identically coloured slot. Once you retrieve a blue battery, and return to an empty blue slot, hitting the action button (which you use to interact with the world) doesn’t do anything; instead, you have to open the menu (Y) each time to select the specific battery. That’s a minor but persistent issue, given the number of batteries there are to collect throughout the game.

Another equally minor yet persistent frustration is the dome-shaped buttons which make up some of the puzzles; the buttons face a specific direction which you need to be standing in, in order to activate them, but there doesn’t seem to be any reason for this direction requirement. Given the game’s perspective, this often leads to a few seconds of frustrated repositioning just to proceed with the puzzle. 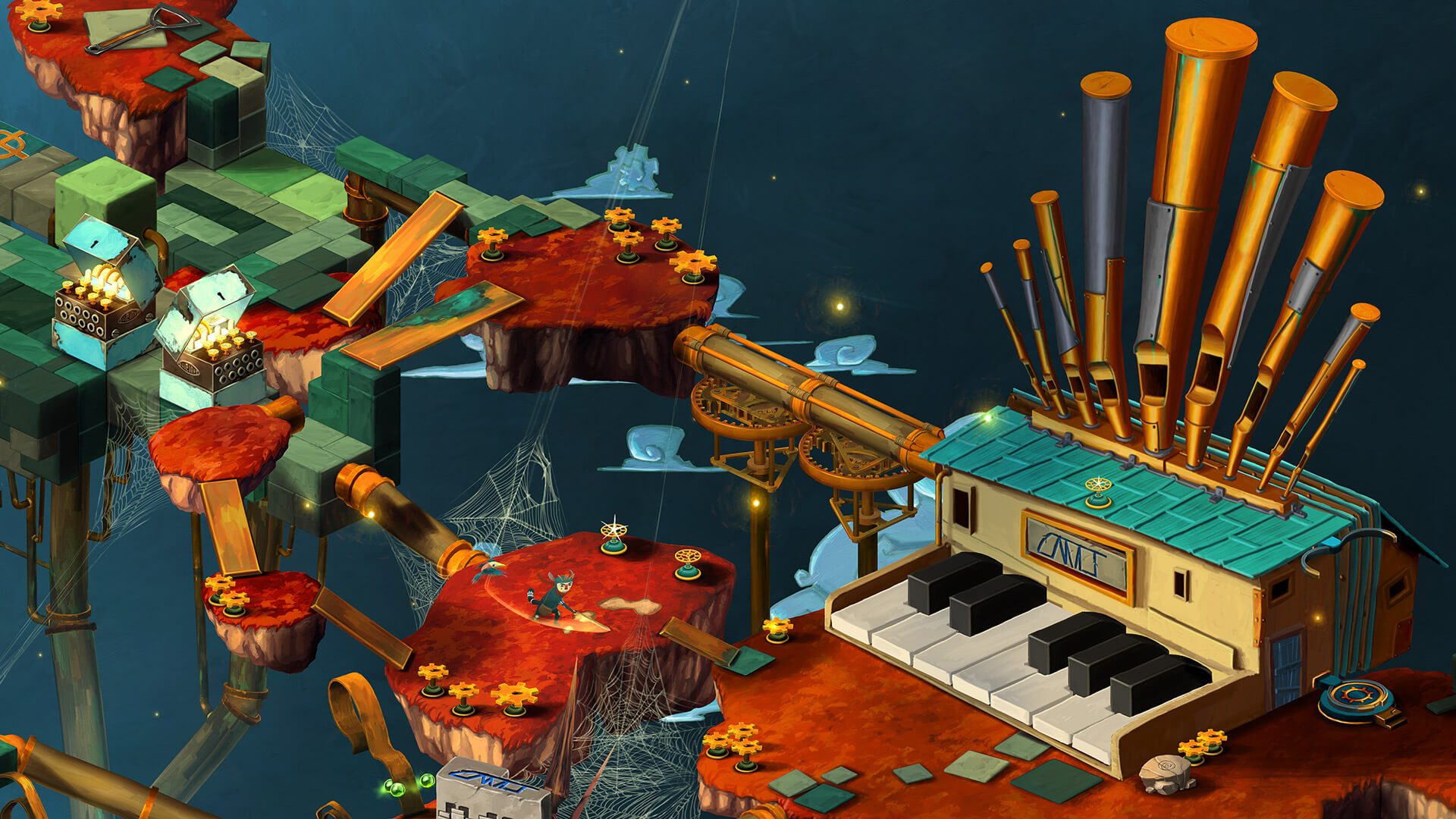 Despite this, Figment is an enjoyable game, and its music and voice acting strongly influence the game’s atmosphere. Figment deals with the serious subject matter of trauma, and does so with a rich yet gentle palette of colours, charming rhymes, and — get this — bosses that sing before and during battles. It’s a game both adults and children can play and enjoy on different levels; definitely a Christmas purchase to keep in mind if you’ve got to buy something for kids. This is probably the closest we’ll get to a modern-day, albeit toned-down, Hieronymus Bosch-styled game; you will laugh and delight in its incredibly imaginative world when you come across the headbanging ear-tree, get instructions from the rhyming mayor, cross pencil bridges or ride on snakes and flying books.